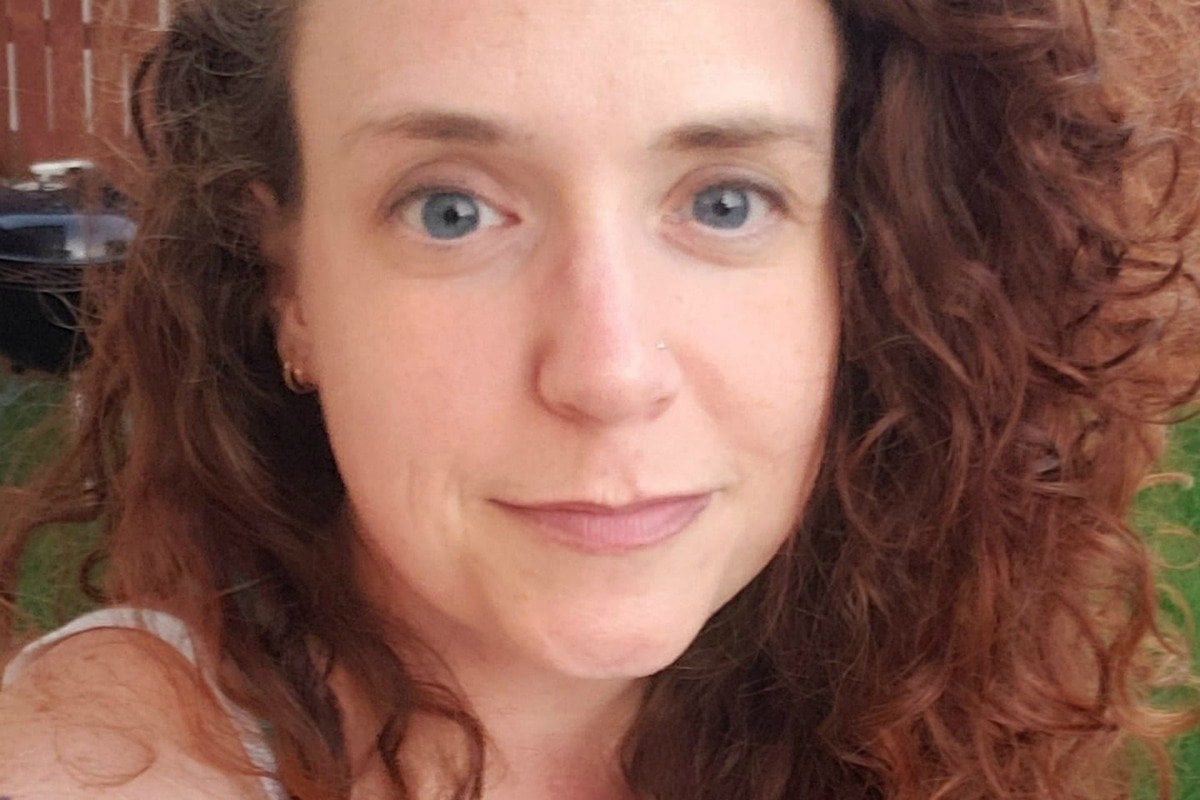 Janie Oyakawa had a really unpleasant experience giving birth in a Texas hospital.

She was angry at how degrading she found it and describes feeling like she lost her autonomy in that moment.

So she started to pull back from modern medicine, and for her next birth she opted for a home delivery with the assistance of a midwife.

"That kicked off me going down a trail towards more natural parenting styles. Because I wanted to find more women who had had births [at home] with midwives, and who had been in a similar situation," Janie told Mamamia's news podcast The Quicky.

"I got involved in a lot of parent groups which were 'crunchy' as they say. So pro-natural birth, pro-breast feeding, pro-attachment parenting, pro-co sleeping. Subsequently, along with that came anti-vaccine views."

Listen to Janie speak about her experience on The Quicky. Post continues after podcast.

Pretty soon, Janie found herself being sucked in.

"I started to wonder what modern ailments could be attributed to vaccination. And that gave me a lot of hesitancy. So after I did have my child at home, I did not go down the typical path of vaccination like I had with my older children," she said.

The problem with online forums like the ones Janie found herself in is that they are petri dishes for fear and conspiratorial thinking. Once you are immersed, it's not just the voices from the groups feeding you constant misinformation - it's also the social media algorithms.

For the uninitiated, Janie describes being inside those groups like this:

"If there was any kind of question about any child being sick, it was 'Did you vaccinate them?', 'Did you recently vaccinate them?'. There was just this instant reaction to blame anything that might be wrong with a child in the community to 'Well if you didn't vaccinate them, maybe your neighbour's kid was vaccinated, and your child played with them and the vaccine was 'shedding' at the time'," she explained.

FYI: Vaccines do not 'shed.' Here are some more facts about vaccines. Post continues after video.

"It became a real boogeyman so to say. There was so much that was 'related' to the ills of vaccination," Janie told The Quicky.

One of the main arguments Janie became fixated on was how young we vaccinate our children.

"I was hesitant about things like the Hep B vaccine that's given to them before they even leave the hospital. Like why do we do these things? I now know more about the evidence around why we do that. But at the time it just didn't seem logical. I felt more along the lines of 'too many too soon'. Which you hear very often [in the groups.]"

But there came a point where the American mother noticed and started to feel the "social cost" that came with telling people she was anti-vaccination.

"I kept feeling like I had to have a really good argument to share with people who were shocked by my stance. But when I tried to hone my argument, I couldn't," she admitted.

As she continued to educate herself, she chimed into the groups with some of her learnings.

"I started to explain like, 'This is actually why it's done' and 'This is why it might be a good thing.' The community didn't handle it well at all. In several communities, there was a back-and-forth and then the thread would be deleted. Or there was a back-and-forth and then someone would get upset and I would get private messages asking me to stop and then eventually one group I got kicked out of altogether. They just wouldn't tolerate it," she said. 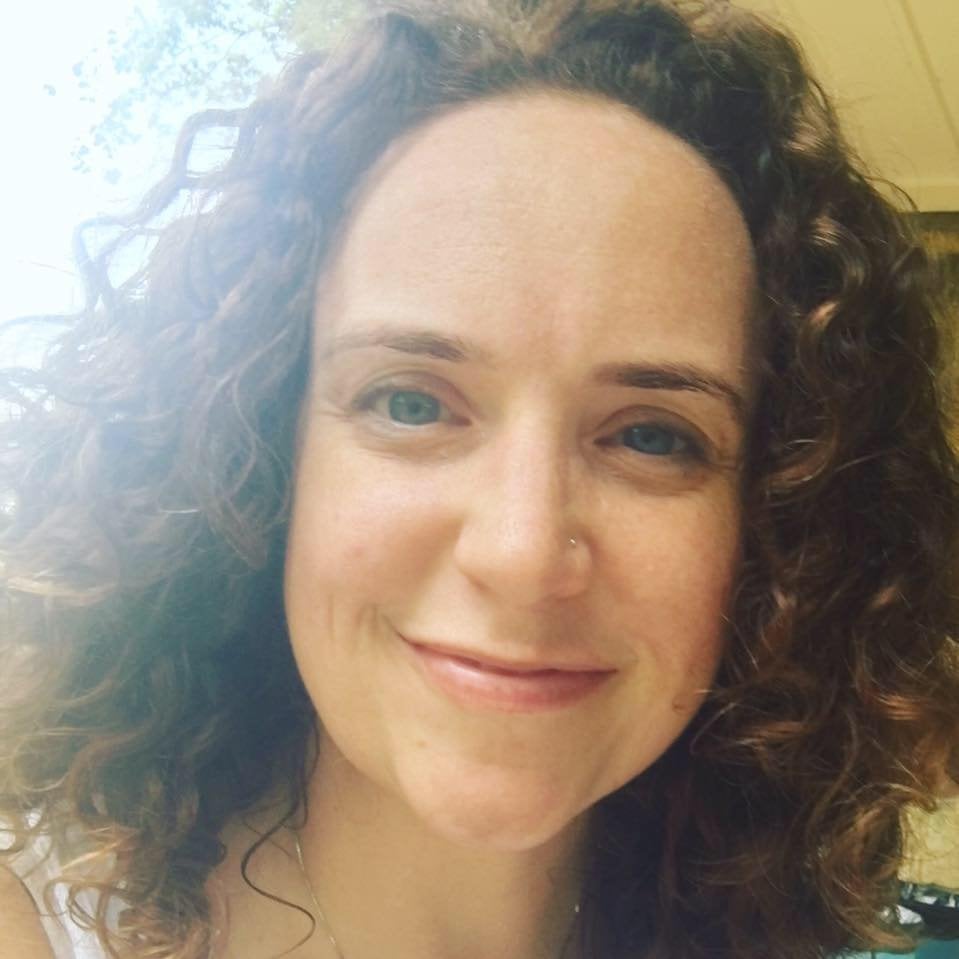 Janie found herself falling down the rabbit hole of anti-vaccination conspiracy theories. But she eventually found her way out. Image: Facebook/Supplied.

As cognitive scientist and co-author of The Conspiracy Theory Handbook Dr John Cook tells Mamamia, conspiracy theories are built out of a psychological desire to have control.

"People are unsatisfied by randomness. We are built to see intention and meaning. That's why we tend to see patterns even in random noise. When we feel out of control, conspiracy theories ironically make us feel more in control," he explained.

"There's so much fear amongst parents, and so many stories online about 'this is my kid, they were totally normal and this is my kid after the vaccine'. And I think stepping back and outward a bit, the therapist in me can look and see a lot of the difficulties with developmental disabilities is that some of it is so unseen along the way. You don't notice when they're an infant because they're in the range of normal until they get to that toddler age - which just happens to coincide with [many] vaccines," she said.

"All of a sudden parents have that 'aha' moment like 'there's something off here with my child' and they want to find something external to blame it on, so vaccines become the scapegoat."

Fear, as Dr Cook explains, is the other perfect ingredient for conspiratorial thinking.

"People are more vulnerable to conspiracy theories when they are anxious, when they feel threatened and out of control. That's exactly the kind of conditions you get during a pandemic caused by random events," he said.

Read: The 4 biggest conspiracy theories about COVID. And why they're bullsh*t.

Or, in this case, when someone's child is showing signs of disability or illness.

Janie doesn't know if anything retrospectively would have changed her mind when she was in the depths of her vaccine-hesitancy.

She believes what likely made the biggest difference for her was seeing the people around her fully vaccinate their kids on schedule, no questions asked.

"It was making me question my own position with people who were like 'No, I have done it because I trust the science' kind of thing," she reflected.

"I hope I wasn't ever as deep as this, but for some people the more you argue with them the deeper it entrenches their belief. They pride themselves on being anti-authoritarian about it. I think a more powerful thing instead of arguing, is for all the people who support vaccination to just stand up and support it."

"If the question is how do you change the mind of a conspiracy theorist, the answer is very difficultly," he said.

"Because the other trait of conspiratorial thinking is immunity to evidence. Any information you give them that contradicts their theory they typically react by assuming that evidence was part of the conspiracy. They will argue that that's exactly what they expect you to say. If there's no evidence for the conspiracy they interpret that as proof that 'they' did a good job hiding their tracks. So how can you convince someone when whatever evidence you provide it just confirms their own beliefs?" he said.

Janie has a lot of remorse about the way she used to think. She feels the exact opposite now and is staunchly pro-vaccination.

"I feel like we need to start equating adamant anti-vaxxers to drunk drivers. People have got it in their minds that this is a personal decision that only affects them. And in this situation that is not true. Everything about it is a risk-benefit analysis. If you put a seatbelt on, you take a risk with the seatbelt itself cutting you or twisting your forearm in an accident. But you make the decision that the risk of the seatbelt itself is outweighed by the seatbelt keeping you in the vehicle. Vaccines are the same way except it's not just something that protects you, it protects other people too," she told The Quicky.

"You are taking a risk for you and your entire community. You are literally helping all of these diseases which cause so much suffering when you decide not to vaccinate," she added.

Dr Cook says there are approaches you can take to at least have a constructive conversation with an anti-vaxxer. But it's his advice to try to innoculate everyone else and build resilience in the rest of the population instead, so they are less vulnerable to being misled by misinformation.

But if you do find yourself across the dinner table from someone rattling off anti-vaccination conspiracy theories, Dr Cook says leave ridicule in the other room.

"Generally my approach is to be selective when to engage. I generally only engage if I think something positive can come out of the conversation. That positive thing isn't necessarily changing that person's mind, it can be for the benefit of other people. Use the opportunity to turn it into an educational moment for everyone else in the room," he told Mamamia.

"Ridicule is not going to help, they'll put up a brick wall immediately, so try to come at the conversation with empathy and understanding.

"Try to appeal to the common value of critical thinking. Conspiracy theorists like to see themselves as critical thinkers because they aren't 'gullible', so try to get them to apply that to their own arguments and whether the evidence fits their theory. It's a long shot, but it's one constructive way to try."