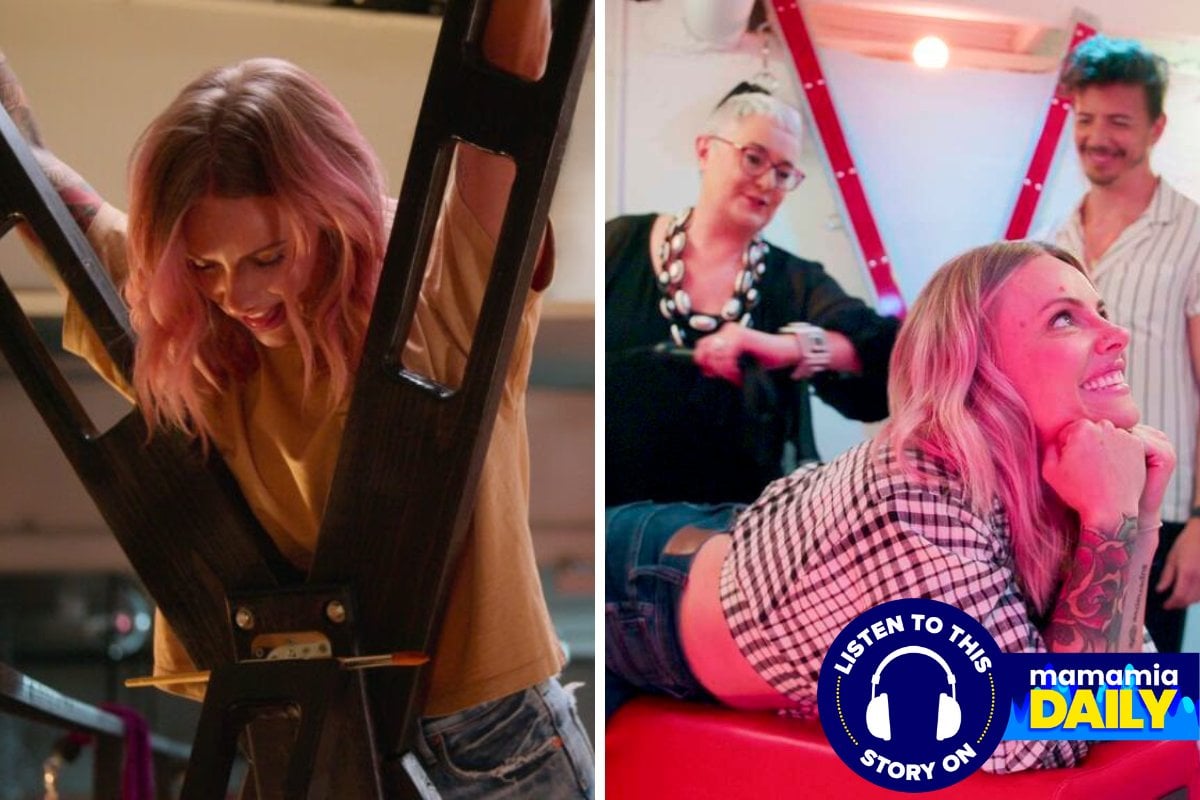 Listen to this story being read by Katie Stow, here.

I was just casually opening up Netflix on my morning off, looking for a bit of distraction while I necked my coffee and chomped my way through a banana. The first thing that beamed out of my TV screen: How To Build A Sex Room.

As the Sex Editor at Mamamia, there's nothing I love more than a pervy look into the sex lives of, well, anyone. So the fact a whole series of sex chats was staring back at me, I knew I'd struck gold. I put my banana down (as that felt slightly inappropriate now) and hit play.

Watch the trailer for How To Build A Sex Room right here. Post continues after video.

I am not even slightly telling porkies when I tell you I didn't move from my couch for the next eight hours.

While I don't recommend digesting any TV show in one swallow, being this deep into How To Build A Sex Room has led me to an insatiable urge to talk about what I have just witnessed.

So here are my thoughts.

The first thing you need to know about How To Build A Sex Room is that while it promises raunch and romp, the host of the show (and the head interior designer) is an absolute sweetheart.

She's not your usual sex show host, and she'd perhaps look more at home doing some community gardening with your great aunt, but don't be fooled by her wholesome smile. This woman knows sex. And she's going to talk about it for eight hours. 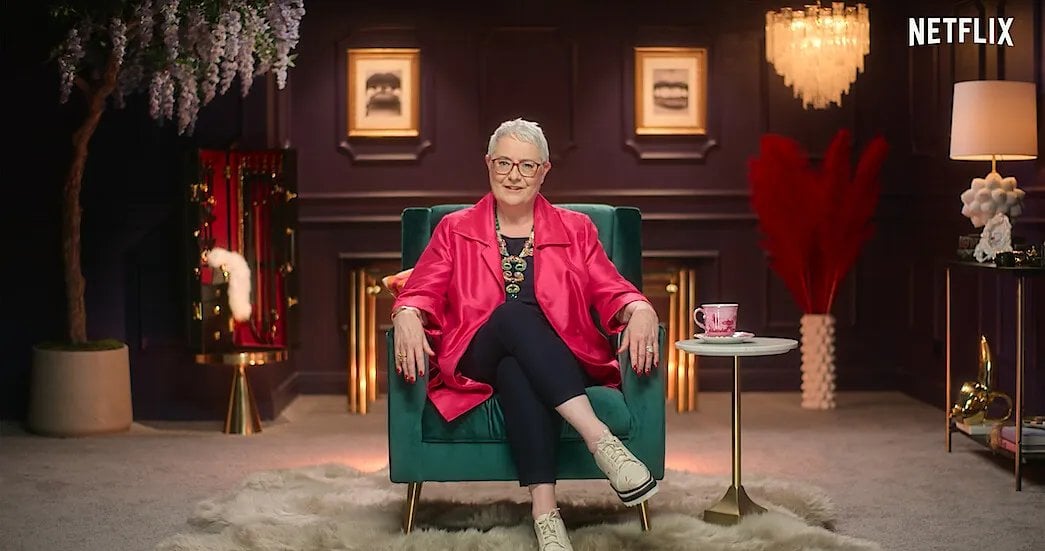 Image: Netflix.  As an interior designer from England, she initially specialised in luxury bathrooms and kitchen designs, before a high-end client asked her if she'd ever designed a sex room before. She hadn't, but she was intrigued, and this chat thrusted her into the world of sex room designing.

She seemingly has the ability to make everyone feel relaxed and confident with their sexual preferences and appears unflappable by even the kinkiest of requests.

In short, I love her, and she's the best lass I've seen on the telly in a long time.

It can be a lot of gimp masks. A lot of tight leather. A lot of PVC. A lot of things that look like they require talcum powder and/or vaseline to physically get on your body.

The show introduces a couple who used to be married, but are now 'dating' and looking to put a sex room in their home. As they are briefing Melanie, they explain that the room isn't just for them, but it's for their 'poly family' – made up of six people who all have sex with each other. A lot.

Just as a mini sex ed class: Polyamory refers to a consenting type of open, non-monogamous relationship – often made up of two or more people who care deeply about one another while having sex with people outside of their relationship. There is absolutely nothing wrong with this setup, and it's a lifestyle that more and more people are leaning into.

While I've interviewed many polyamorous people for work and spoken to intimacy experts about the benefit of polyamory, I've never seen a whole 'poly family' interact on screen before. But that's exactly what happens in How To Build A Sex Room, and it's actually adorable. 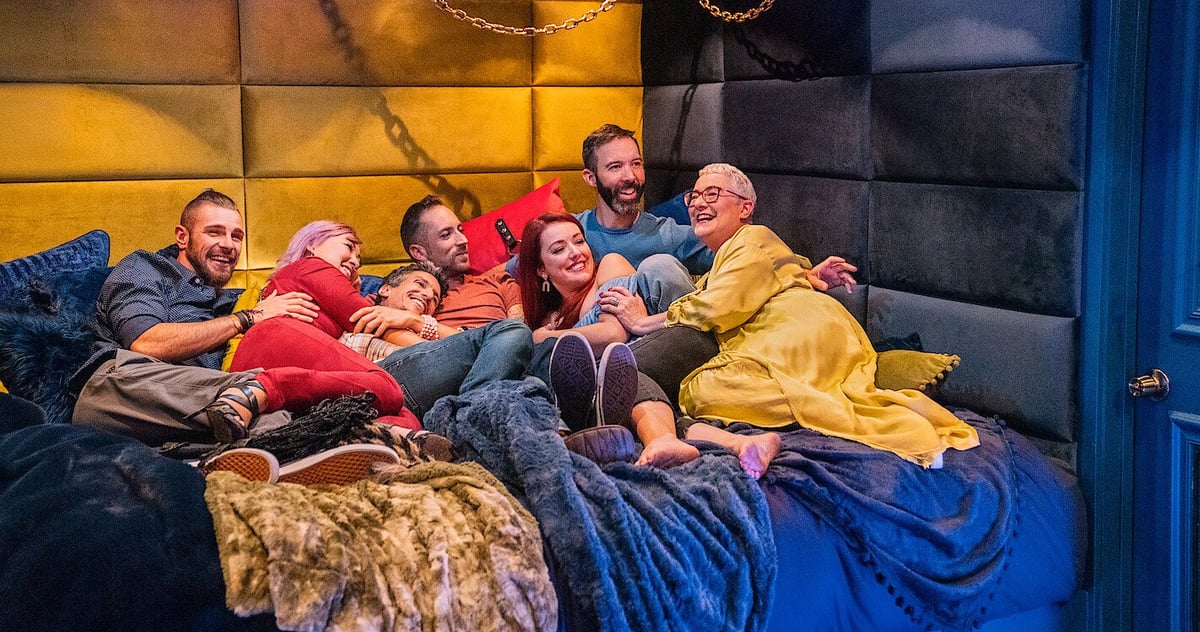 Melanie and the poly family checking out their new sex room. Image: Netflix.

There is so much connection, care, and affection between these four guys and two girls. There doesn't seem to be jealousy or competitiveness, but instead a really deep respect for one another and an active support in wanting each other to recieve pleasure and be sexually satisfied.

While Melanie is an interior design/sex dungeon wizard, I do feel for the woman, because there really is a limited colour palette deployed across the sex accessories landscape.

While I thought this was restricted to sex toys and sexy outfits to dress up in – which are almost always black or red, with the occasional side of purple or white – it appears the colour scheme has spread to furniture too.

So if you're having a sex room renovation, note that you're going to have to stick to a palette of black, white, purple or red. Because sex furniture (notably those wavy humptastic chairs) only come in those colours. Need proof? Get your eyeballs on the shades deployed over the How To Build A Sex Room series: 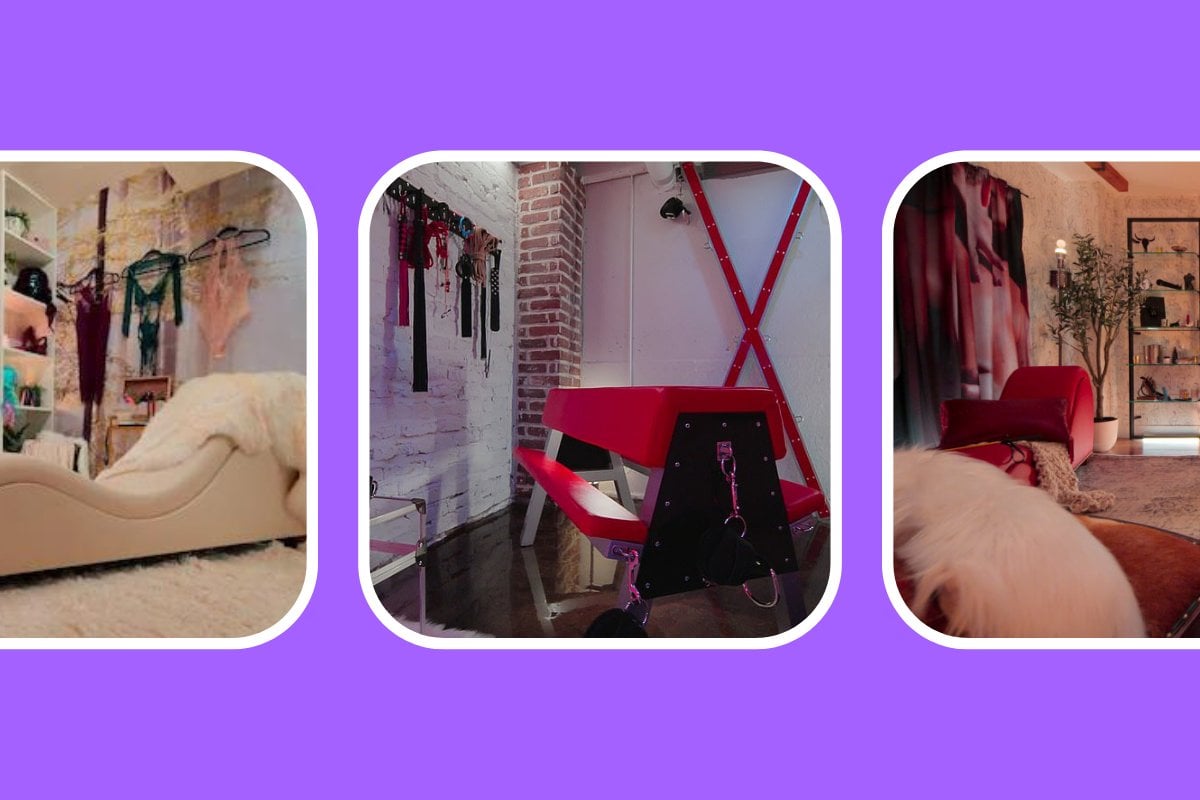 5. I want a butt-print coffee table.

I think we can all agree that a sleek wooden coffee table with a carved out butt-print of your very own bottom is an essential purchase.

This unique piece popped up in a renovation for a woman in her fifties who wanted subtly sexy features to her f**k room, so Melanie decided to style it as a living room, with kinky secrets hiding in plain sight.

While there were faux picture frames with sex toy vaults hidden behind them, detachable handcuffs strewn around the place and a sneaky ball gag muzzling a marble bust – the pièce de résistance is undoubtably the coffee table butt bucket. 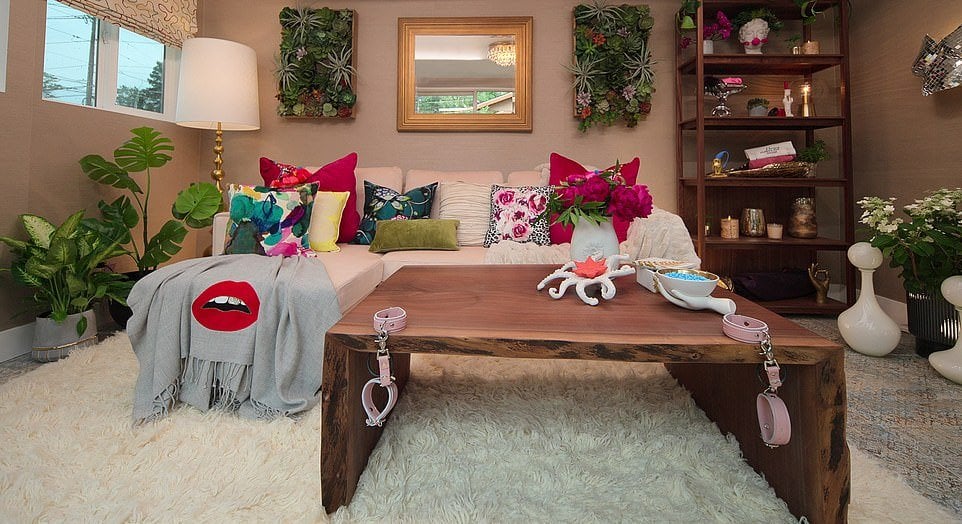 DO YOU SEE THE BUTT?! Image: Netflix.

The purpose? So she can comfortably sit on the sturdy coffee table with her butt being cushioned, and even wiggle about on it for a pressure orgasm.

I think this is a genius piece of design, and until I have enough dollars in the bank to get my own, I'm going to start referring to the ass-dent in my couch as a deliberate work of art.

Have you watched How To Build A Sex Room yet? I'd love to know what you thought of it! Let me know in the comments.

You can hear more from Katie via her author profile or by following her on Instagram and TikTok.