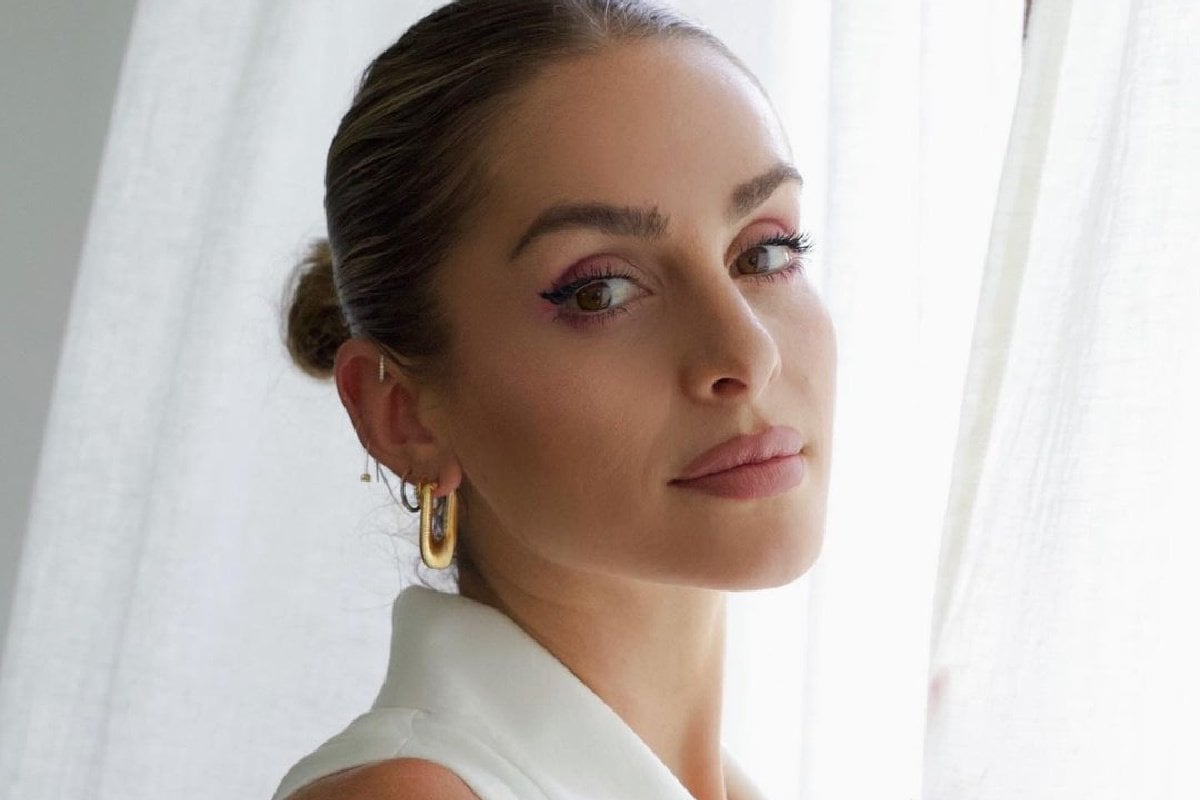 Influencers are often defined by their number of followers, the controversial products they promote and many, many selfies. But we like to remember where it all began: their first ever post on Instagram.

And when talking about Holly Leelu, it doesn’t get more on the nose than this.

An infinity pool. A neon bikini. A Bali backdrop.

Holly began her journey with Instagram yonks ago, where she fell in love with the platform and its ability to marry her passion for photography and modelling.

“I would get a tripod, set it all up and do my thing,” she explains of her early-day solo shoots.

But things dramatically changed when the likes started rolling in.

“I started getting more likes, and obviously I love likes. So I kind of became obsessed with engagement, and likes, and growing my brand.”

For Holly, there wasn’t a penny-drop moment where she realised she could make a full-time wage off Instagram. Instead, she was made redundant from her job and had to act fast.

While she was quickly trying to figure out what she could do, her dad weighed in with advice we’re pretty sure no other father has given before.

“My dad said, ‘if you go back and work for someone else I’m going to kill you’. So it was more like, do I want to die? Or should I give this a go full-time?”

This rather uncouth push from her father was the vote of confidence Holly needed to dive into the big, bad (and rather unknown) world of influencing.

Listen to Mia Freedman interview three magazine queens who influenced a generation, on No Filter. Post continues after podcast.

Prior to taking the plunge, Holly hadn’t made a whole lot off her Instagram account - sharing promotional selfies and selling products on her feed had delivered dribs and drabs of money, but certainly not a liveable wage.

She was unsure about how much money she could actually make doing this full-time, but managed to rake in $6,000 in her first month.

“I was stoked. Because I’ve always had this annoying thing where I doubt my skills and my potential, so I am always surprised when good things like that happen.”

Determined to boost her bottom line, Holly has since diversified her offering by creating a digital marketing agency to generate revenue alongside her influencing.

This means as well as managing her own growing social pages, she handles other brand pages too.

Holly claims that despite that area being where she wants to grow the business, currently she’s making half of her income from her agency and the other half from her influencing.

And after hearing her pay breakdown, we’re not surprised why.

She reckons that if she were to exclusively work on the influencing side of the business (and remove the agency side from her profit margins) she would make around $80,000 per year.

But as a smart business woman, Holly mastered the art of the upsell.

She often sells an influencer package for $5,000 which includes the following:

And she pairs her influencing offering with content creation from her agency side, allowing her to charge more, work more and earn more.

In fact, Holly is now cashing in a “six digit salary” for herself.

When Holly began monetising her Instagram feed there was absolutely no framework around the ‘going rates’ for selfies, or guides on what an Instagram Story was worth, so she had to figure it out for herself.

“There weren't really industry standards, and it was all really hush hush. You can’t just go onto Seek and see people’s salaries for this sort of career. So I just had to use trial and error.”

Since she started, companies like The Right Fit have established formalised ballpark figures for influencer rates. Now, a simple online calculator can drum up the going rate of a selfie. 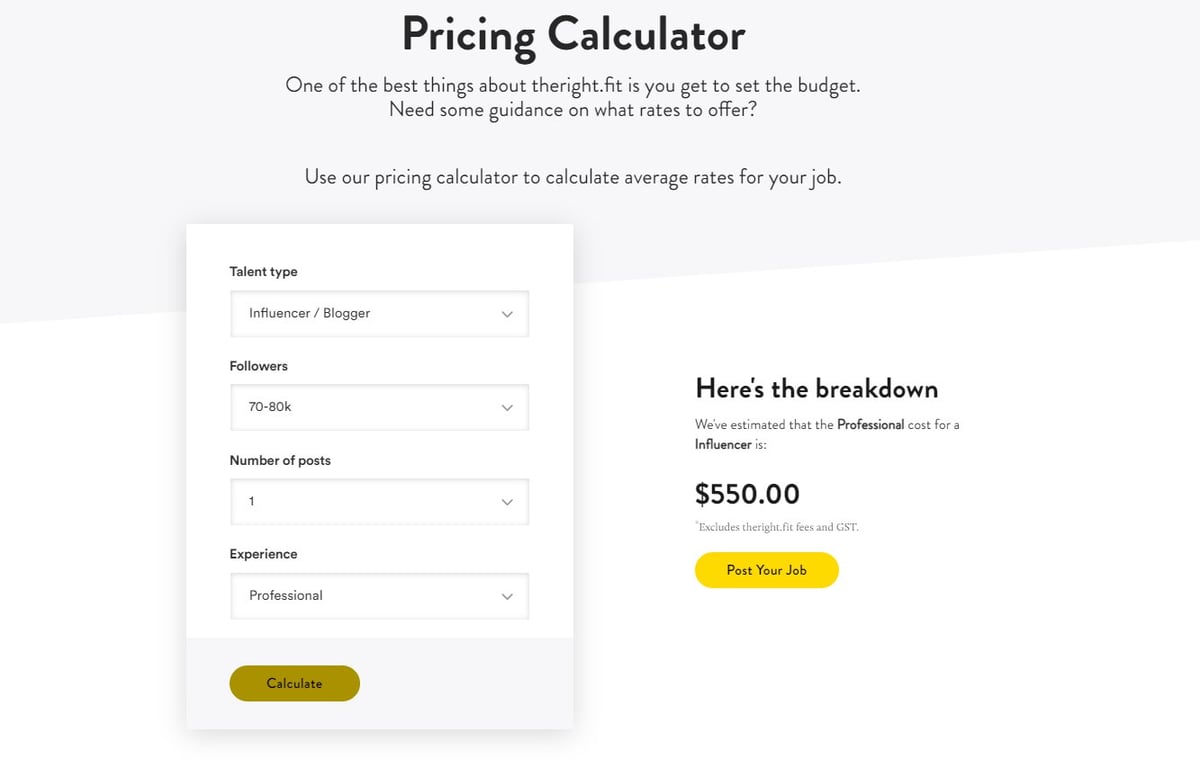 As expected, there are still plenty of offers for ‘contra’ deals or free products in exchange for content, but Holly has drawn the line with those.

“I don’t expect others to work for free, and brands shouldn’t expect that of me either.”

Holly reckons she spends on average 50 hours per influencer job, with that including the following tasks:

So after completing all of these tasks, it only seems fair that Holly wants an actual paycheque for her efforts.

Plus, if Holly were to take payment as product then she would be in the negatives rather quickly. Why? Because she hires a photographer, videographer, pays for the location hire and buys props for styling out of her own pocket.

That all costs real money, and simply can’t be paid for in protein powder.

After working in this space for nearly 10 years, Holly knows that the real potential for growth lies outside of her influencing. That’s why she’s much more focused on those business goals.

Plus, Holly has experienced something that many influencers have struggled with: Burnout.

“I kinda just work all the time. I miss quality time with loved ones. I miss going out with friends. It takes a lot of hard work and sacrifice, and I can’t switch off.”

When your brand is you - your face, your hair, your body, your words - there’s no such thing as annual leave.

“I take on so much work because I don’t have a life. I’ve got chronic fatigue and I have a few other illnesses associated with stress.”

So for now her focus is on growing her business while managing that classically impossible work-life balance that we all struggle with. Shedding a light on the fact that influencing is a job, not a hobby. And while things may look glamourous on the grid, there's a heck of a lot of grit and hustle behind every single selfie.

Next, have a watch of the No Filter episode with influencer Sophie Cachia where she discusses the moment her 'perfect life' turned upside down.

If you want to work with Holly (or just take a look at her account), then head here. And you can check out Holly’s agency page, HLL Creative, right here too.

I
ip a year ago

Reply
Upvote
If she does actually have Chronic Fatigue Syndrome  my apologies and I hope learns to pace her lifestyle accordingly.
I
ip a year ago

Reply
Upvote
“I take on so much work because I don’t have a life. I’ve got chronic fatigue and I have a few other illnesses associated with stress.”
I’m not sure if this influencer has Chronic Fatigue Syndrome or is just very tired from her big work load, but as someone who lives with this illness and has the impact of its devastation daily, it may be better for her to choose her words carefully instead of making light of an illness that is misunderstood and often ignored. The community is working towards gaining more understanding for the wider community. Flippant comments like these don’t really help.
News
General
Opinion
True Crime
Politics
Sport
Explainer
Entertainment
Celebrity
Reality TV
Movies
TV
Books
Rogue
Royal
Lifestyle
Beauty
Fashion
Weddings
Home
Wellness
Health
Fitness
Travel
Food
Family
Before The Bump
Pregnancy
Baby
Kids
Teens
School
Parent Opinion
Work & Money
Money
Finance
Career
Lady Startup
Relationships
Sex
Dating
Separation
Friendship
Family
Real Life
Couples