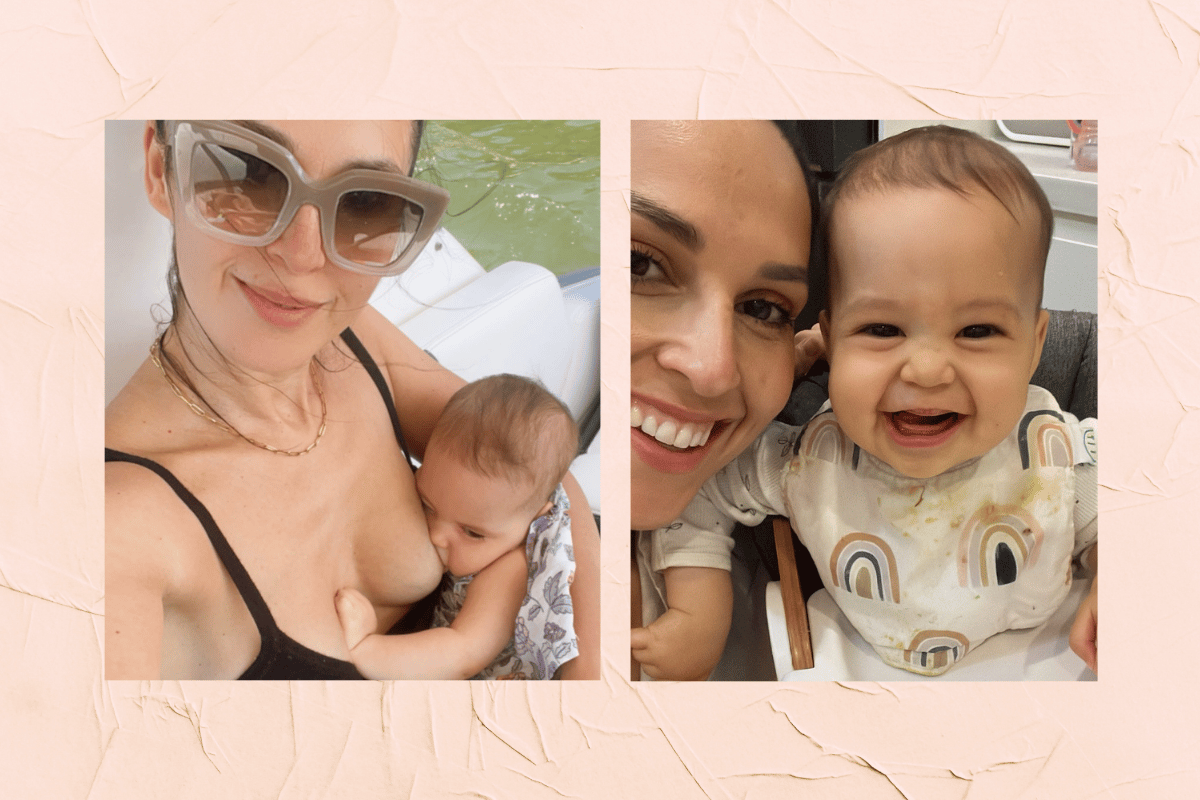 For many new mothers, success or difficulty with breastfeeding is an emotive subject.

Take podcaster and media personality Zoe Marshall who posted on Instagram yesterday about the feelings that came with her baby's last breastfeed.

"On the day Ever turned 10 months (Easter Sunday), she decided to finish breastfeeding," Zoe writes.

"She had been dropping feeds gradually on her own terms and last week was the last one. I think she's our last child. So that was the last time I will feed. Such a wonderful experience for me. Will I miss it? Maybe one day. Do I miss it now? No. My health needed a break."

"I think becuse [Ever] wanted to move on and it was on her terms, I feel okay. She's a happy, healthy girl who is now on formula as well as three meals and one snack a day.

"It's so weird to have my boobs back (as tiny as they are). Do they get bigger again? Asking for a friend! I miss them already."

Zoe asked her Instagram community to tell her about their last breastfeed, and dozens of women commented with mixed emotions.

Mamamia spoke to eight women about their unique breastfeeding experiences, and what it felt like when they stopped.

At Mamamia we believe fed is best. For the purposes of this story, the below accounts are from women who chose to breastfeed their babies.

I breastfed my first for three weeks and my second for three days!

I had problems with getting a supply due to my babies not latching properly. It was not a good experience for me; I found it all stressful, confronting and uncomfortable.

When I didn’t have a baby trying to feed, I was attached to a pump trying to increase demand which just made me feel horrible, like a cow.

The day we swapped to formula, we were a much more settled and content household. Both babies were happier, and I felt a little more like myself each day and less like a failure.

I stopped regularly breastfeeding my daughter at 20 months old.

One evening a month ago I asked her if she wanted some boob before bed and she ignored me and kept playing so I took my chance and stopped then.

I felt ready to stop as she’s been a toothy feeder (!) and I haven’t felt overly emotional about it but with the hormone change, I’ve been crying about a lot of other things.

I loved the special bond we had and looking down at her relaxed little face while she was feeding. I was however keen to start wearing normal bras and to share the bedtime routine with my husband. I am going away for a weekend with a girlfriend soon and can’t wait!

I breastfed my first child until he was six months. I always wanted to mix feed so my husband gave a bottle of formula in the evening so I could rest.

I started to wean very slowly and gradually. I dropped the middle of the day feeds when he was three months as I found out I had some tumours in my head and neck and required surgery.

Three years on and I had a baby girl. I breastfed most feeds, and she had a bottle of formula at night. She thrived. I loved breastfeeding her and planned to keep it up for as long as she was interested but when she was five months old, I got news that my tumours had returned and I had to wean quickly. It was hard.

When I returned home, it took me a long time to feel connected when giving her the bottle. Time helped heal me and she’s now nine months and a happy, well-fed bub.

I had my second baby in September 2019. After a traumatic birth and a few days in NICU, he was put straight onto formula by the nurses. Once he was strong enough, I tried to breastfeed but my milk was slow to come in and I continued to top him up with formula after each feed. After breastfeeding my first baby until six months, I felt terribly guilty and felt I needed to try harder to exclusively breastfeed.

After lots of trouble with latching (and lots of pain!) I began pumping and alternating between breastmilk and formula bottles which I continued for six weeks until I eventually made the decision that I needed to call it quits.

I felt a lot of guilt at the time, but I had the realisation that my baby was happy and very settled (much more so than my first baby) and the impact the stress was having on my mental health wasn’t good for me or him.

Once I made the decision it was like a weight had lifted and I was pleasantly surprised by how supportive everyone was, not just my friends and family but the medical professionals.

My daughter had a lip tie and tongue tie that wasn’t diagnosed so I had no choice but to breastfeed as she couldn’t take a bottle.

I breastfed until just before her third birthday. I held on that long because mentally I couldn’t cope with ending our breastfeeding journey badly after our challenging start.

I was only feeding at night and in the morning by the last year. My daughter is very clever and loves photo books that my mum makes of our trips and events, so I decided to make her a photo book about how she had to learn to go to sleep on her own.

She completely understood what was happening from the first night and she cried about having to give up 'milky'. I also bawled my eyes out with her. Then each night she got better and by the last night she said goodbye to milky and went to sleep with a bottle without any fuss.

I was so proud of her but also heartbroken at the same time.

I breastfed all of my three kids until they were 12 months.

I’m about to wean my youngest who is nearly one. I’ve gone through mastitis three times, had bad latches, tongue-tie and reflux but we powered through and came out the other side.

I loved breastfeeding and I am feeling so emotional that it’s about to come to an end, forever!

I breastfed my daughter for a little over two years. It is one of the hardest but most rewarding things I have ever done. I had incredible difficulties in the first few weeks. Every feed was excruciating, I had mastitis a few times, used a nipple shield and saw numerous lactation consultants. It was absolutely exhausting, but I was totally determined to breastfeed.

I didn’t stick to a schedule – I fed my baby whenever she wanted a feed whether it was for food, for comfort or bonding. It felt easy, and it was so convenient.

When she was approaching two, I started feeling uncomfortable feeding in public as she was getting bigger and was talking. A few significant people in my life hinted that it was weird to feed a baby beyond 18 months or so and my mother-in-law said something along the lines of, 'Once a baby can ask for milk, it’s time to stop.'

These comments upset me greatly because I wasn’t ready to stop, nor was my baby. I then started to avoid feeding around anyone – my husband included. I felt like it was 'dirty' to breastfeed my daughter considering her age, but I knew she wasn’t ready to stop.

I was only feeding her once a day by the time she reached two years old, and a few months later she refused her preferred breast saying, 'yuck' and our breastfeeding journey was over!

I am so pleased I continued until my baby was 100 per cent ready to wean, not when society was hinting at me to stop.

Nicole Sarah fed twins until they were two years old.

I breastfed my twins until they turned two.

I had a lot of pressure from my husband to wean. He felt that they were too attached to me because I was still feeding, which turned out not to be the case.

They were only having a feed before bed, so it was super easy to transition them to a bottle of cow’s milk and they took to it easily.

I, on the other hand, cried and cried. I was also in the very early stages of being pregnant with their brother, so I used that as an excuse too!

This story was originally published in January 2020, and updated with new information in April 2022.

Reply
Upvote
I had extreme difficulty breastfeeding but was continually bullied into it by what felt like everyone.  I even had someone in the Australian Breastfeeding association hotline berate me because I had given my son a bottle (of breast milk)  because I was so stressed my milk wouldn’t let down and he was a terrible latcher.
I battled on for 10 months and the day I gave up was the most liberating day of my life. I was not sad, I was relieved.
I often joke that I was unable to have a second child because the universe knew if I did and someone tried to make me breastfeed I would have punched them in the face.
R
rosiecat 4 months ago

Reply
Upvote
The pressure around breast feeding is insane. Breast is best is rammed down all mothers throats. I felt like a total failure when I had to end breast feeding after 6 weeks with my first and even less with my second. My kids are nearly grown now and I still feel it a bit. Which is ridiculous! But, you know what, fed is best. Formula is food, not poison. I read the other day that some breast feeding group was trying to get formula advertising banned and require it to be sold in unbranded tins like cigarettes! Absolute madness.
Resources
Very Peri
Skin
News
General
Opinion
True Crime
Politics
Sport
Explainer
Entertainment
Celebrity
Reality TV
Movies
TV
Books
Rogue
Royal
Lifestyle
Beauty
Fashion
Weddings
Home
Wellness
Health
Fitness
Travel
Food
Family
Before The Bump
Pregnancy
Baby
Kids
Teens
School
Parent Opinion
Work & Money
Money
Finance
Career
Lady Startup