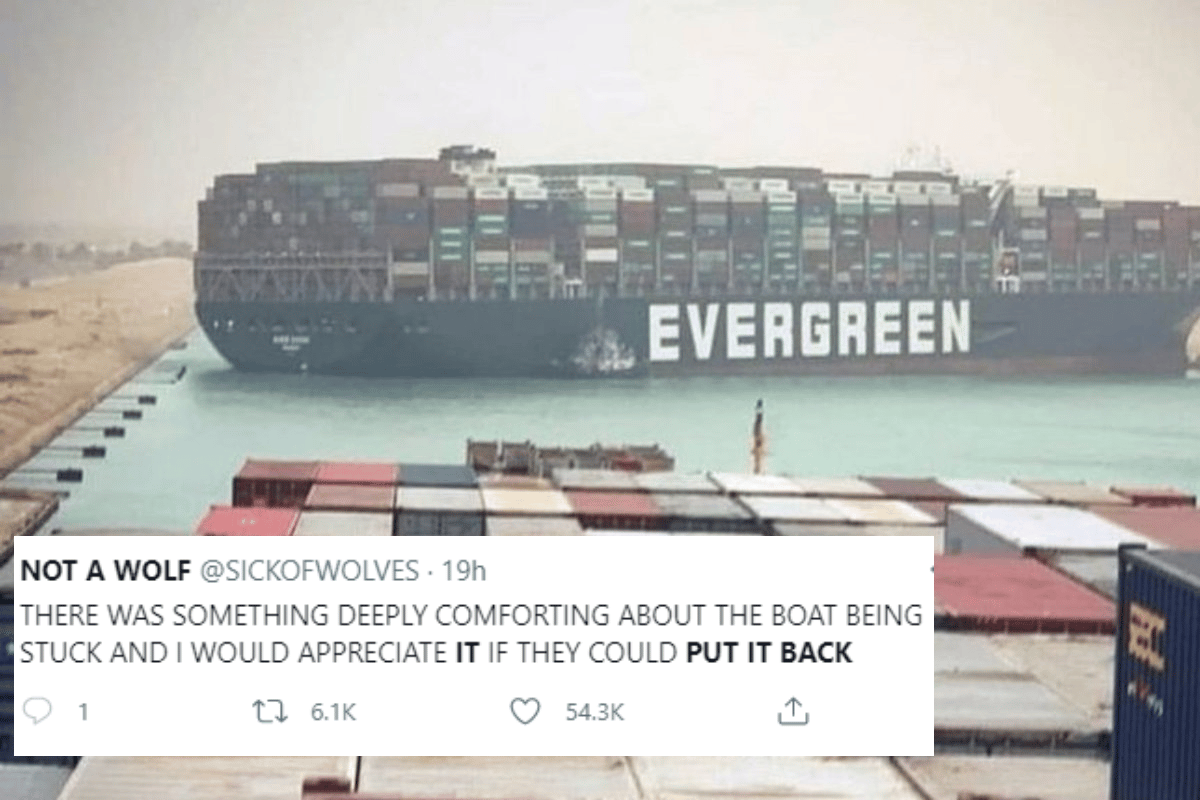 For the past couple of months, I've been trying to find the right words to describe how I feel.

"I just feel sluggish," I'd reply when my friends would ask what was wrong.

"What do you mean?" they'd enquire further and I would throw out words like blocked, clogged, unmotivated.

"I feel like I have no sense of momentum. I'm not moving forward. I can see where I need to go but I just can't get there? Like there's something in the way? And the thing that's in the way might be me?"

Then over the weekend, I finally found the right words.

"I feel like the big f*cking boat stuck in the Suez Canal," I said.

"I feel like somewhere along the way I made a wrong turn, or I over-corrected, or I just made a big bloody mistake and now I've blocked the biggest trade channel in the world and countries are rationing their fuel and everyone's watching me, but I still can't be bothered to move?

"Like why aren't I moving? This is really embarrassing for me but I'm still just sitting here?

"The whole world is watching me. There's memes. A silly little excavator has attempted to dislodge my fat arse from the muddy banks of the world's busiest canal and still I sit here, watching Netflix and eating too many Easter eggs.

"Everything just feels too hard, you know what I mean?"

My friends nodded in agreement. Suddenly they understood. And they soon realised they too are the Ever Given.

We're all just big boats stuck in a tiny canal.

If you're yet to discover the giant boat stuck in the tiny canal and compare it to your own miserable life, let me walk you through the story.

How did the boat get stuck in the Suez Canal?

So, a massive container ship called the Ever Given has been stuck in Egypt's Suez Canal since last Tuesday.

The 400 metre-long, 200,000-tonne vessel became wedged across the canal amid high winds and a dust storm, however it's unclear how it became so... diagonal. Like why is it pointing one way when it clearly needs to be pointing the other way?

The Japanese owner of the ship has since apologised for the massive boo-boo and has admitted that removing the big, stuck ship has proven to be more difficult than they first envisioned.

It's a world first, you see. No one else has ever bogged a massive ship across the entire width of a shipping channel and there's no handbook for this.

Meanwhile, 150 other big, cargo-carrying ships are just sitting there, waiting for this one to move its big red arse.

Why couldn't they "unstuck" the ship?

Late on March 27, 11 tugboats managed to shift the Ever Given approximately 100 feet or two degrees, the Times reports

Then a tiny excavator had a little dig around it which was fun for those of us playing along at home, but didn't really do much to budge the bastard.

As the world has come together to help dislodge the big ship, most of us have offered assistance with the only resource we have at our disposal... memes... glorious memes.

Good news for today: whatever happens, at least you're not the guy who got his boat stuck in the suez canal and broke maritime shipping

There’s a man living in a fishing shack in Greece. Locals know him as a friendly but pathetic drunk. He’s haunted by flashbacks of the day a once-in-a-century storm grounded his supertanker in the Straits of Malacca. And now, we need him to come back for one last job.

He won’t do it for the sake of the shipping industry - they’re dead to him after Malacca. But maybe, just maybe, if he proves himself, he’ll get to see his boy again

Yeah sex is good but have you ever got your boat stuck in the Suez Canal and blocked 10% of the world’s trade?

sorry I blocked the suez canal with my big ass. sorry that was me. I'm trying to fix it but I'm stuck. sorry again to all of Egypt

I genuinely cannot get enough of the suez canal memes they're so fucking funny to me pic.twitter.com/RlwPD3GXt3

Taking a break from AH’s clownery.
Here is a meme of the container ship blocking the Suez Canal 😂 pic.twitter.com/8E2YMKxnpR

Today’s Comic: We are all, in our own little way, that ship. pic.twitter.com/GVDjLxzErX

This picture from the Taiwan/Suez Canal news is such a good meme material I just had to do it pic.twitter.com/KTBokDaUs3

Just after this story was originally published THERE WAS MOVEMENT AT THE STATION.

And over the last 24 hours, the big stuck boat has become increasingly less stuck.

It's apparently completely floated now and will soon recommence its journey down the canal and to... freedom?

In a startling turn of events, as soon as the boat was unstuck "put it back" and "add another boat" started trending on Twitter.

the boat made it and so can you

I love how the ship is unstuck and everyone is like PUT IT BACK pic.twitter.com/z3o0Ao3lln

PUT IT BACK AND ADD ANOTHER SHIP! pic.twitter.com/t0pLFQWe1L

What a time to be alive and physically and/or metaphorically stuck in a canal.