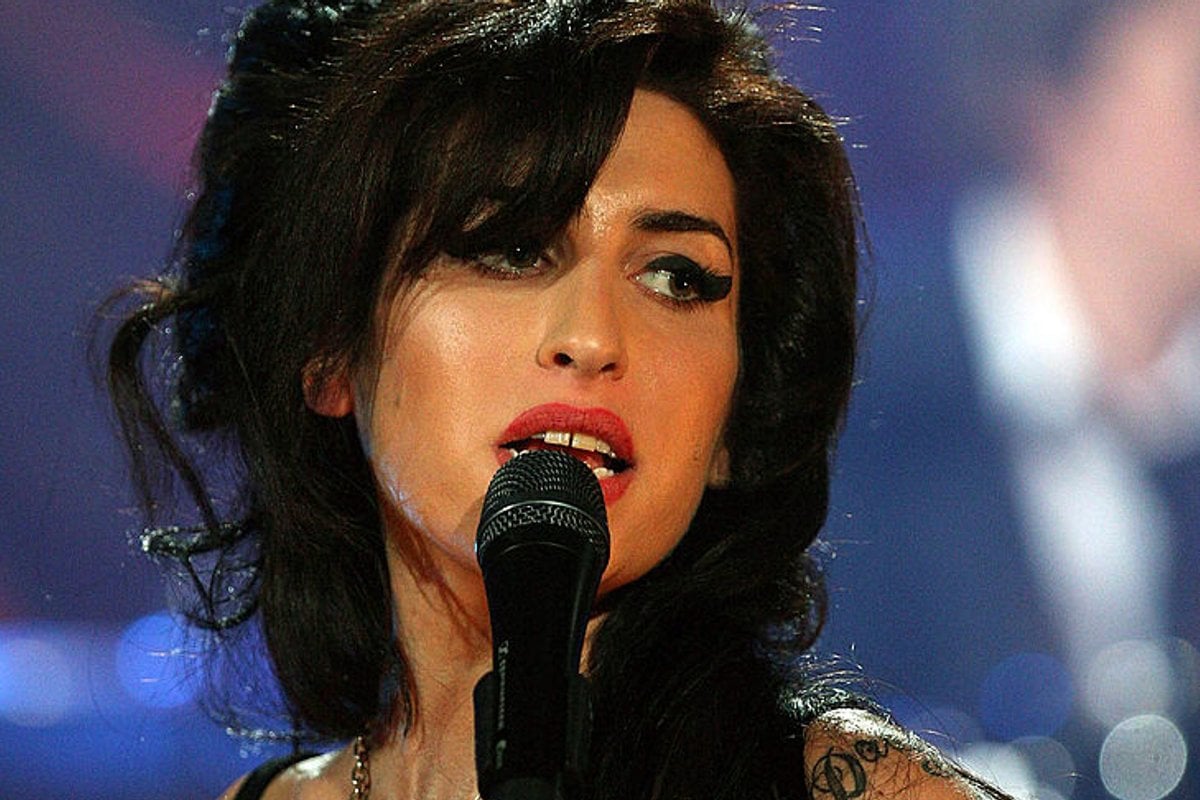 This post discusses eating disorders and drug use, and could be triggering to some readers.

When Amy Winehouse died 10 years ago, at the age of 27, the British tabloids had plenty to say.

The Sunday People quoted a source claiming Winehouse had been seen buying cocaine, heroin, ecstasy and ketamine before her death.

The Sunday Mirror had a “friend” blaming an ecstasy overdose, saying it was “obviously a dodgy pill”. Even The Washington Post called her a “drug-haunted diva” in its headline.

Watch the trailer for Amy Winehouse's 2015 documentary. Post continues below.

But the truth was sadder and more complicated. At the time of her death, the outrageously talented singer hadn’t touched drugs in three years.

There’s no doubt Winehouse was troubled.

Growing up in London, her taxi driver dad Mitch split from her mum Janis when she was nine, after a long-running affair with a co-worker. Her talent shone through at an early age, but so did her mental health issues. She began self-harming after her parents split, leaving scars on her arms.

She smoked marijuana and skipped school.

At the age of 14, she started on antidepressants, and around the same time, bought a guitar and started writing songs.

Self-conscious about her appearance, she became bulimic. Her mum remembers the time she told her about it.

“When she was probably 15, she one day said, ‘I’ve got this really great diet, Mum. I eat what I want and then I just bring it all up,’” her mum says in the documentary Amy. “I obviously did not think that deeply of it. My feeling was it would pass.”

Winehouse scored a record deal when she was still in her teens, and moved into her own flat.

She had just turned 20 when her debut album Frank was released. Suddenly she was very, very famous.

Her childhood friend Tyler James says in his book My Amy that she struggled with some of the stories about her.

“The media called her ‘curvy’,” he writes. “She interpreted that as ‘fat’. We’d call it ‘fat-shaming’ now. I didn’t see bulimia then. What I saw was basically anorexia, the OXO cube/Haribo diet.”

In 2005, Winehouse met Blake Fielder-Civil at a bar. He was a music video assistant and drug addict. She fell madly in love, tattooing his name on her chest.

"I had never felt the way I feel about him about anyone in my life," Winehouse told Rolling Stone.

“She made the decision to take it herself,” James writes in My Amy.

“To be with him and be on his level. She just decided, ‘Well, if that’s the thing that’s stopping me from being with him then I’m gonna do it.’ She never saw it as a big deal.”

Winehouse started making headlines for all the wrong reasons. She punched a female fan in the face after the fan said she shouldn’t marry Fielder-Civil. Winehouse told E! News that the fan was “really rude”.

“I’m very insecure and I’ve got a thing about bad manners,” she added.

Winehouse and Fielder-Civil married in 2007.

Later that year, the couple were arrested for marijuana possession in Norway. Not long afterwards, Fielder-Civil was jailed over claims he’d tried to fix a trial, following a bar fight.

Winehouse’s second album, Back To Black, featuring the hit “Rehab”, was nominated for six Grammys. But she couldn’t make the awards ceremony because of visa troubles caused by her drug use.

She accepted the Grammy for “Rehab” via satellite, thanking her parents and “my Blake incarcerated”.

Her downward spiral continued. There was a video of her supposedly smoking crack, and photos of her wandering around her neighbourhood, barefoot, in a bra and jeans.

Her live performances suffered. Sometimes she forgot the lyrics, other times she didn’t turn up.

"I do drink a lot,” she said on The Album Chart Show. “I think it's symptomatic of my depression. I'm manic depressive, I'm not an alcoholic, which sounds like an alcoholic in denial."

When Fielder-Civil got out of jail, he said he was leaving Winehouse for her own good.

“I have to let her go to save her life,” he told News Of The World.

After several stints in rehab, Winehouse overcame her drug addiction in 2008, according to her father.

“The doctors said it was impossible, but she really did it,” her father said.

“He helped her with her problems and Amy was looking forward for their future together.”

While there was a lot of media coverage of Winehouse’s disastrous live performance in Belgrade in June 2011, where she appeared to be “too drunk to sing”, Traviss has pointed out that she did an acclaimed tour of Brazil as well as several other concerts and impromptu appearances in the last two years of her life.

“All were praised except Belgrade – and Amy performed these shows because she loved music and because she was in control of herself,” he told EW.

Her heavy drinking was obviously still a problem, but she was trying to overcome it.

In July 2011, she spoke to her father, and said she hadn’t drunk for three weeks.

“She said, 'Dad, I've had enough of drinking. I can't stand the look on your and the family's faces anymore.’”

But Winehouse was still suffering from bulimia. One of her closest friends, Naomi Parry, says the singer didn’t realise the damage it could do to her health.

“I don't think Amy had any idea it could do just as much damage, if not more, than drinking,” she told Cosmopolitan.

On July 20, Winehouse started drinking again. On the night of July 22, she spoke to her GP, Dr Christina Romete.

Dr Romete had been treating Winehouse for some time, but Winehouse had refused psychiatric help for her alcohol addiction because she thought it would affect her creativity. That night, Winehouse sounded “calm and somewhat guilty”, according to Dr Romete.

“She specifically said she did not want to die,” she later told an inquest into Winehouse’s death.

Winehouse was in her London flat with her bodyguard, Andrew Morris, staying with her. Morris says she was only drinking moderately.

She was watching YouTube videos of her performances on her bed when Morris saw her at 2am on July 23. He could hear her laughing.

The next day, Morris found her on her bed, dead, the laptop still next to her and vodka bottles on the floor. Her blood alcohol level was 0.416, more than five times Britain’s drunk-driving limit.

Her cause of death was eventually determined to be “alcohol poisoning after binge drinking following a period of abstinence”.

Her GP, Dr Romete, felt Winehouse’s bulimia could have contributed.

“Maybe a combination of her eating disorders and the alcohol just made her heart stop,” she said in Amy.

Winehouse’s brother Alex told The Guardian that she suffered from bulimia “very badly”.

“She would have died eventually, the way she was going, but what really killed her was the bulimia. I think that it left her weaker and more susceptible. Had she not had an eating disorder, she would have been physically stronger."

"I still meet people who say, 'Oh, it was drugs.’ But it wasn't. She'd been clean for a long time. She got off drugs on her own, using willpower alone. She was an alcoholic, but if that was her only problem, or if she'd only had bulimia, maybe she'd have been okay.

“A lot of people clung on to the [drugs] idea; perhaps it was easier. The thought that you can die from an eating disorder is terrifying.”

Reply
Upvote
There is also speculation that she could’ve died from alcohol withdrawal. People who drink heavily and quit suddenly. The body goes into shock and organs shut down. Due to her heavy drinking history, speculation is that Winehouses ignored her doctor's advice to cut down on her heavy drinking gradually.

Reply
Upvote
1 upvotes
@kooky_couth "Body going into shock and organs shut down" is not what happens with acute alcohol withdrawal. Nevertheless, it is a high-risk, potentially life-threatening situation for alcoholics. This article seems to regard alcoholism as "different" to "drug addiction" when in fact they are on the same spectrum. Alcohol is a drug - only difference is that it's legal. Indeed, its easy availability and social normality means that it kills more people than illicit drugs.