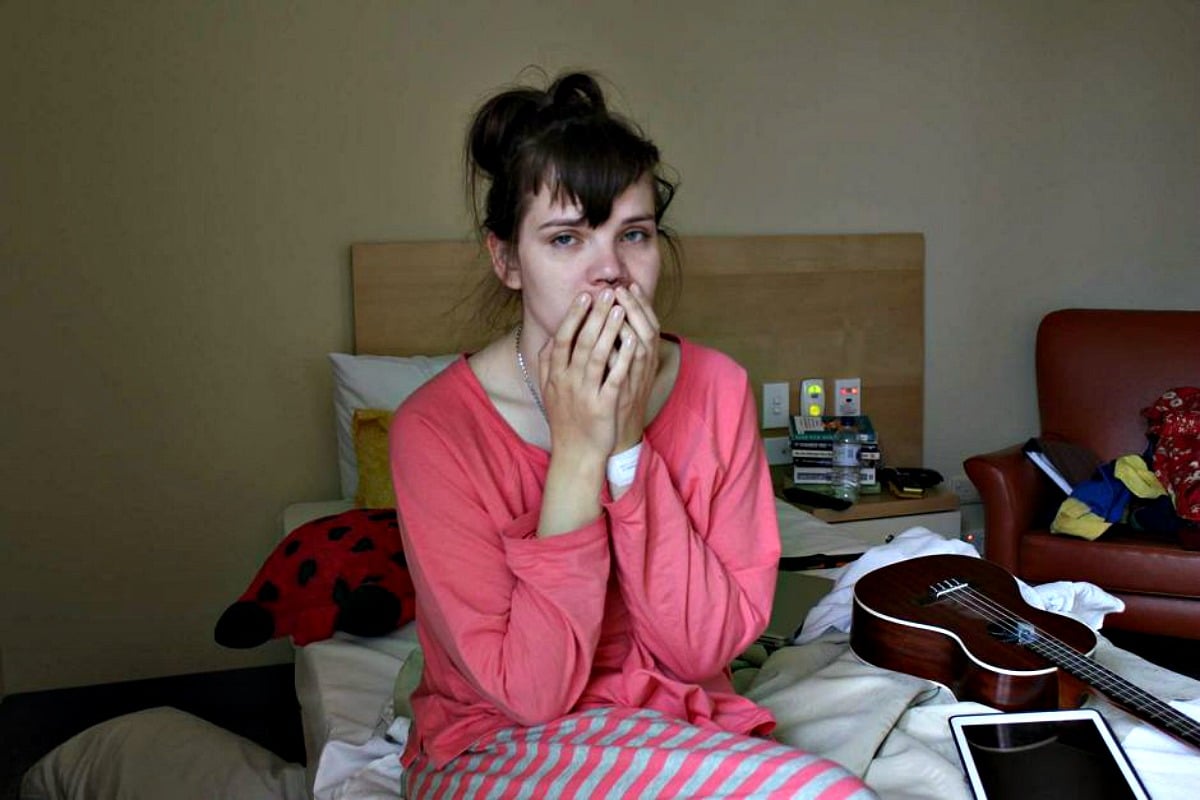 When Honor Eastly checked herself in to a psychiatric facility at the age of 25, she realised within 10 minutes that it wasn’t what she’d imagined. She’d assumed it would be a place for healing, for getting well.

Instead, buried among the procedural questions about allergies and her date of birth, the nurse handling her intake interview asked her if she was likely to “give it up easily”, as in, have sex with other patients. She also told Honor her self-harm “wasn’t that bad”, that normally people like her come in “all cut up and down”. But there was one comment in particular that really got to her.

“The nurse said, ‘Let me give you some advice: Don’t tell anyone in here your diagnosis,'” Honor told Mamamia‘s No Filter podcast. “I was like, ‘What? Do you mean other patients and stuff?’ She was like, ‘No, the staff. Don’t tell the staff; they’ll treat you worse because of your diagnosis.’

“Some of the diagnoses I had received were associated with being just difficult, basically. So [the nurse] was kind of saying, ‘You’re not actually that bad. So don’t tell people this diagnosis, because they’ll treat you like you are going to be annoying or frustrating or attention seeking.'”

It confused Honor at first. She’d been seeking help for her mental health for more than a decade, and felt fully the power that diagnoses could bring. The way they made her feel believed, validated, and afforded her access to otherwise out-of-reach services.

But as she ventured further into the mental health system, the artist/podcaster began to learn – as she put it – “that these labels could be used against me”. Now working as a mental health advocate, it’s a point she believes we don’t hear about enough.

“There are particular diagnoses that have a lot of connotations and stigma attached. Often we talk about that as if it’s a thing that the public isn’t literate enough to understand. But that stuff plays out in the mental health system a lot,” she said.

What’s it really like in a psych ward? Honor Eastly wants to change the way Australians see mental health and she’s doing so by sharing her story…


Honor’s experience is not an isolated one.

A 2013 report by the Mental Health Council of Australia found that people with mental health conditions experienced similar levels of stigma from health professionals as they did from the general population. Almost 29 per cent reported that their treating health professional had shunned them, and these figures rose to over 54 per cent for those with post-traumatic stress disorder and 57 per cent for those with borderline personality disorder.

The report featured snapshots from patients and carers, insight into the ways in which they’d been made to feel less-than by the very people and the very infrastructure tasked with helping them.

There was a mother and carer who wrote, “We have sat in a room with [a] psychiatrist telling our extremely intelligent, ambitious, well-educated and capable daughter (at 18) that she should stop expecting anything from life because she has a mental illness, even leaving her bedroom to join the family for meals was apparently far too ambitious. She was told in my presence by the psychiatrist to accept it (not being able to leave the bedroom) and stop complaining.”

A patient who wrote, “I have found that most doctors, be they GPs or Psychiatrists, don’t really listen to someone who is mentally ill. Every so often a good one comes along who listens, seems to have a real understanding and a genuine interest in bringing out the best in a patient. For the most part however, the majority ‘go through the motions’, writing out scripts when necessary and putting in a token ten minutes or so to justify their fee/time.

“In places like [an emergency room] and mainstream hospitals, there is no priority given to a patient with a mental illness, no consideration given to how difficult it is for them to wait lengthy times or even be surrounded by lots of other people/noises. Any reaction by these patients is perceived as ‘bad behaviour’ and [they] are made to wait longer or be treated with less compassion than they deserve.”

Like many of the respondents in the MHCA report, Honor knows it’s not universal.

“I don’t want to cast aspersions on everyone in the mental health [sector],” she said. “I have met some amazing, lifesaving clinicians who have really full hearts. And it’s really, really hard to stay that way in a system that lacks resources and is built on structures that make you put people in boxes.”

While diagnoses are crucial for clinicians, Honor said the ‘boxes’ hers came packaged in seemed to outweigh her humanity during her time in the facility.

“A lot of the ways people were talking to me wasn’t about trying to connect with me and [acknowledge] that I was going through a really scary, painful experience,” she said. “The initial reaction was like, ‘Are you going to be a problem? You better not be a problem’, which was like ‘If you self harm in here, we’re going to kick you out and you’ll go to a public hospital.'”

Dismantling those boxes is partly why Honor created and released a six-part podcast about her time in the psychiatric ward called No Feeling is Final. Not once while taking about her experience, on the show or now, does she mention her diagnoses.

“One thing that’s been really great that’s come out of it is that I have had a lot of messages from parents who have said that the show has really made them understand what their kid is going through in a way that they really couldn’t understand before,” she said. “And I think that’s because it focused on experience, instead of diagnosis.”

The whole system is sadly not up to par and I think this if the root of the problem. They don’t have the time to give because there’s so few resources. The stigma is very real

Maybe if they would give Borderline Personaliyt Disorder a more suitble name, it would not be so taboo. But if one has a milder version the medical "professional" often will just call it bi-polar 2. BPS's are difficult, but hey, what is the job of the Doctor's? To treat only people who roll over:)