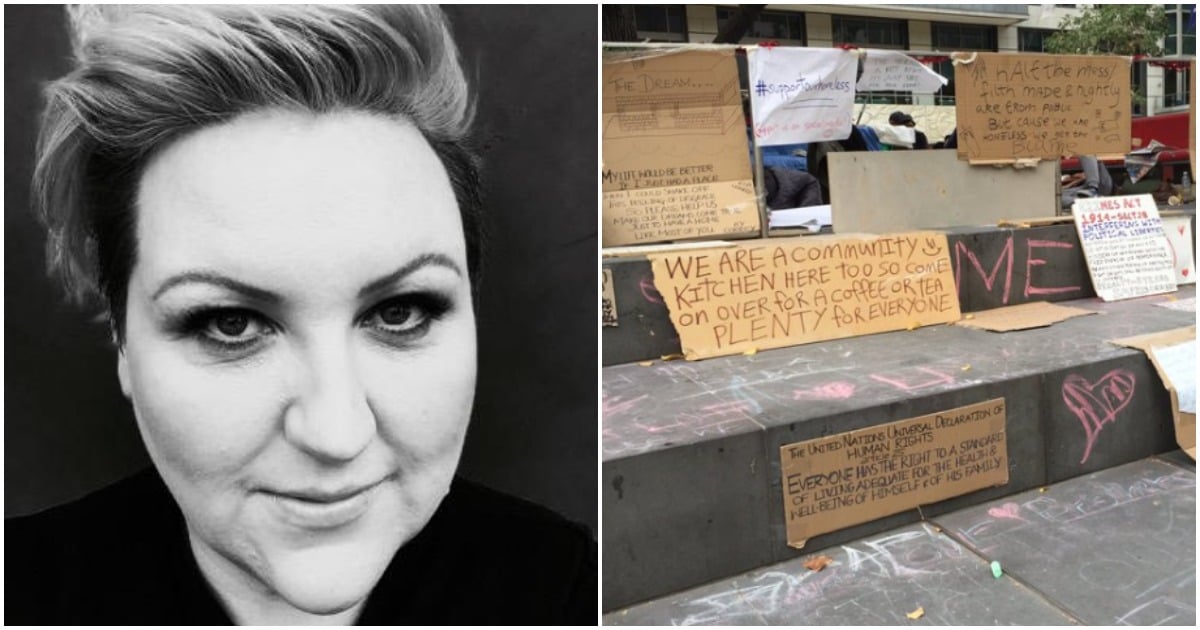 It is very, very easy to walk past people who sleep on the street. You probably do it every day.

Maybe it’s because it’s too hard to look directly at someone who has nothing.

Maybe it’s because we don’t have a spare dollar in our purse that week and don’t want to stop and talk.

Meshel Laurie hit the streets in at the start of Melbourne’s winter to talk to a group of homeless men and women who were protesting in the CBD after what they say has been negative media coverage portraying homeless people as violent.

Listen to Meshel interview one of the homeless people she spoke to, who chose to remain anonymous. (Post continues after audio.)

Here are some facts:  There are currently 105,237 people in Australia who are homeless, and of those desperate people, almost 120,000 were turned away from homeless shelters last year. In Melbourne’s CBD alone there are roughly 247 homeless men and women finding shelter on the streets. So yes. Homelessness is a problem. A big one.

Meshel spoke to one man, who has been “in and out of jail during winter for the last two years.”

“This time of year, right now, with this weather… it’d take me 20 minutes, [to pinch something] and I’d get at least three months, or if I wanted six months, I’d go and get six months

“The last time, I got 18 months, and that was for a three-pack of boxer shorts, and a couple of pairs of socks… And the judges know, it’s common practice.  And because of the extent of my history, I don’t have the option of my sentence [being] to serve out to the community, I always get custodial sentences, but that’s what I was aiming for. It’s taken me nearly three years now just to break that habit.” he explains.

Just as I’ve rocked up to visit the homeless group at City Square the police have also turned up to ask questions… pic.twitter.com/xiih3QxUPX

Sometimes the kinds of accommodation that are available to people sleeping rough are dangerous. In some shared accommodation, people can’t lock their own door. They have to live with people they don’t know. Launch Housing deputy chief executive Heather Holst told Meshel that in other small motels around Melbourne, where homeless women are accommodated for respite, it can be unsafe for the women who are already incredibly vulnerable as it is.

“Some of the offers that are the best the services can do for people, people rightly say no….It’s really risky. We’ve got to rely on motels, especially for that sort of short term shelter side of things, we try our best to work out who should go where, but there are a few different services using them, and we can’t necessarily make sure we only send women to ‘that one‘.” Heather says.

“It’s a problem for people who are sleeping rough, and it’s a problem for women who’ve had to leave because of family violence….People need more of the low income affordable housing, that they can be secure in. That’s the missing piece.” she explains.

Listen to the full episode of Nitty Gritty Committee, and hear Meshel talk to the homeless about what it is really like to sleep on the street, as well as chat to Heather about whether or not there will ever be a solution to helping people off the street.