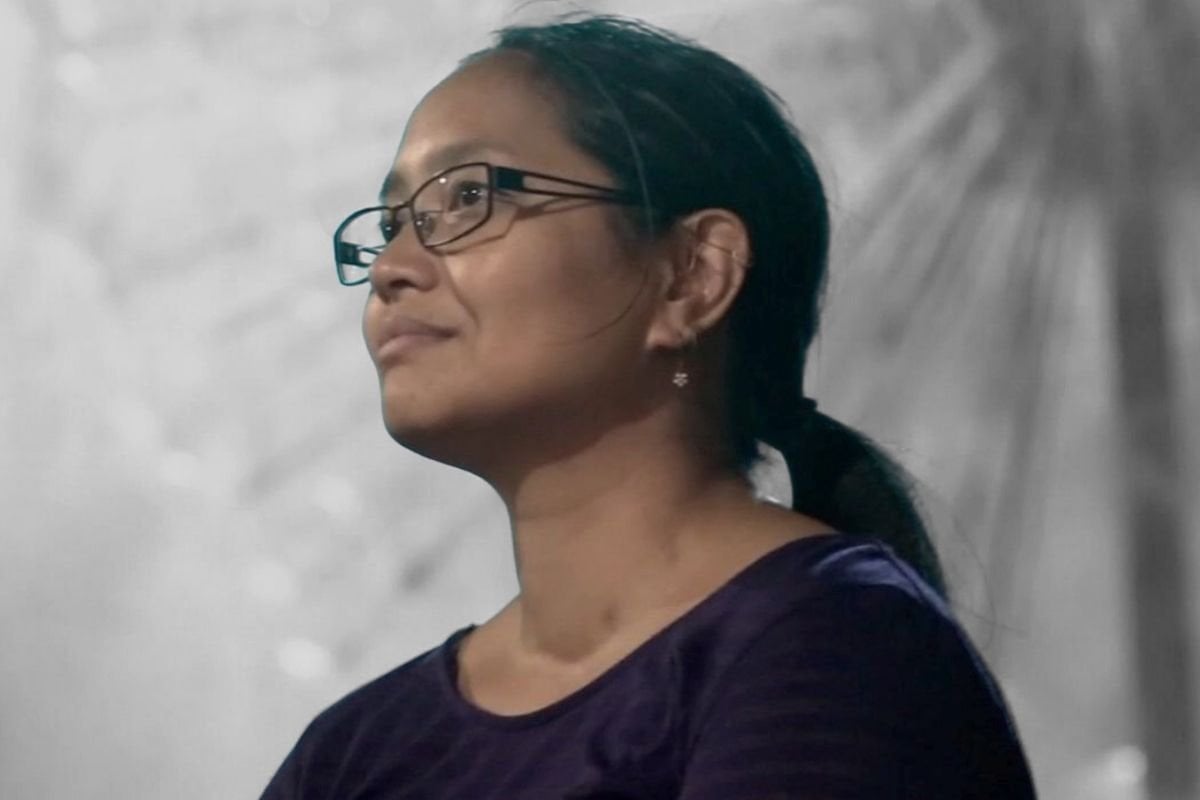 Sleeping in a park at night near other homeless people, mostly men, might seem like a dangerous thing to do.

But to Jai Jaru, who spent 20 years of her life in and out of homelessness, it didn't feel scary. Because when you're homeless your sensitivity to 'danger' is lower. You're immune to it, but you also don't have a choice.

It was actually walking the streets of Sydney's Rushcutters Bay at 2am that ended up being the most dangerous thing Jai ever did. She'd just been discharged from St Vincent's Hospital, and didn't think it was worth finding a place for some shuteye with only a few hours of darkness left, so set off on a stroll.

Three men attacked and raped her. They've never been caught.

But when Jai lays down in a park near other homeless people, she's chosen to sleep in that group. As Jai explains, there's a solidarity amongst Sydney's homeless that's almost impossible to explain to those who haven't slept rough.

Because when the people who run the homeless shelters and give out the coffee at the food vans go home to their families, rough sleepers are left to their own devices. And as Jai stresses, they must look out for one another.

"We do make choices about 'do I want to sleep in this park with this group, or do I want to sleep with this other group?'" Jai told Mamamia. She explains that sometimes she'd know so-and-so had gotten paid and was therefore likely to go drinking, so she'd avoid sleeping in that group on that night.

Sometimes she'd avoid the parks altogether. The last train out of Central Station to Newcastle used to leave the platform at around 12:30 - 1am, and the last coffee van shut at about 11pm. So with a thermos full of hot tea, Jai used to get some "horizontal time" as she calls it, on the 2.5 hour ride up the coast. She'd wait on the platform for a couple of hours and then get the first train back to the city, arriving into Sydney about 6am. 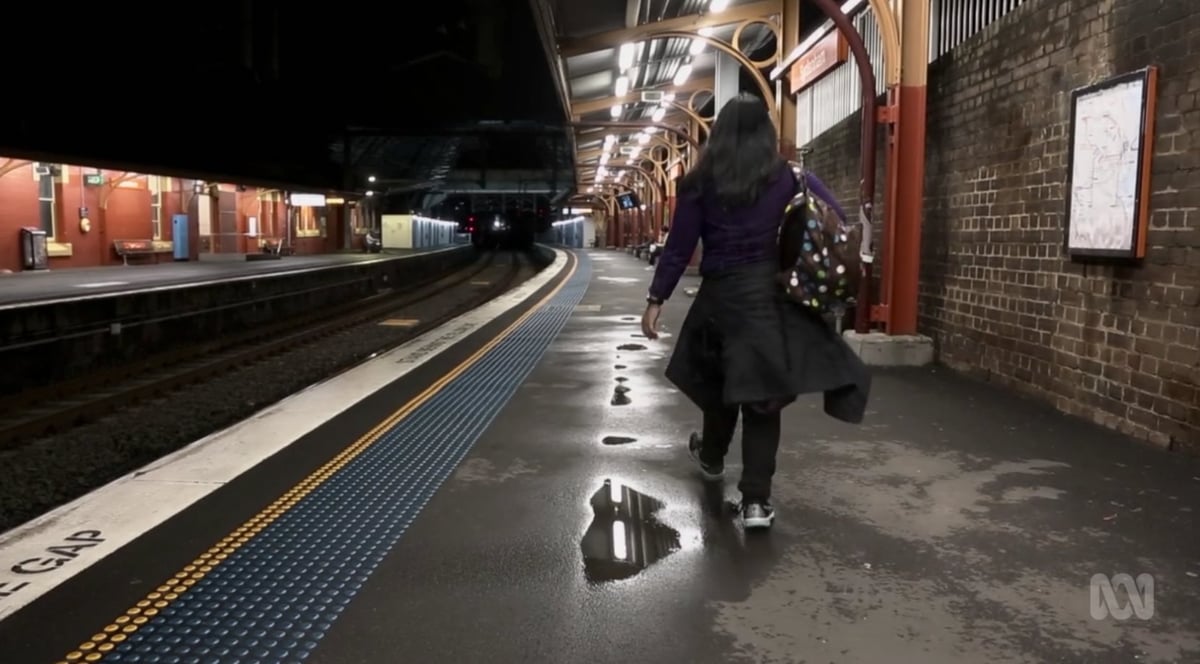 Catching the train from Sydney to Newcastle and back was a way to pass the night, and stay safe. Image: Annette Cohen.

That's one of the biggest misconceptions people have about homeless people, said Jai. That they are somehow less human than the rest of society.

"We are not that different from anybody else. These are choices, and we are not silly people. And having a routine helps measure out the day. You know how you like your first coffee of the day? Well so do we," she said.

First stop of the day for Jai when she was sleeping rough was often a 7/11 for the $1 coffee. Then she'd plan her week around who was offering what. One place used to do bacon and egg rolls for a couple of dollars on Tuesdays, another would do pancakes on Monday morning. There was someone who'd offer cheap haircuts monthly and another organisation that gave out free clothes on the opposite fortnight. 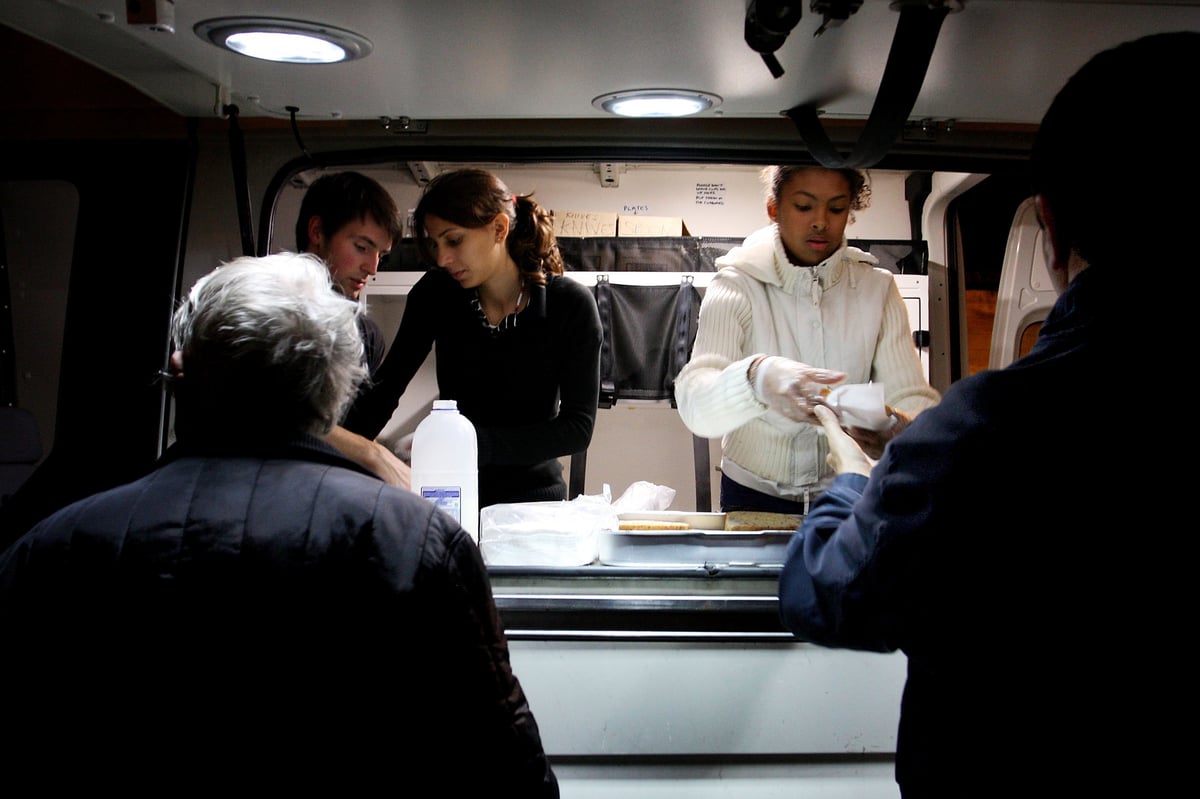 "It's no different from pubs having a Tuesday night special... these are the things that help us feel normal," she told Mamamia.

Being homeless also doesn't mean you can't be kind, or caring. They share blankets and jackets, especially when it's raining. And if there's a pregnant woman among them, someone will offer up their chocolate to quench her cravings.

"I mean that's just what you do," said Jai. "We are not selfish people. We have our moments, but doesn't everybody? We are good, caring people and we care about our people first, because no one else is going to."

Jai came to Australia from Thailand at the age of two after being adopted by an Adelaide family. Her parents divorced two years after she was placed with them, and Jai says she experienced abuse at the hands of her father who used to have fortnightly access to her. 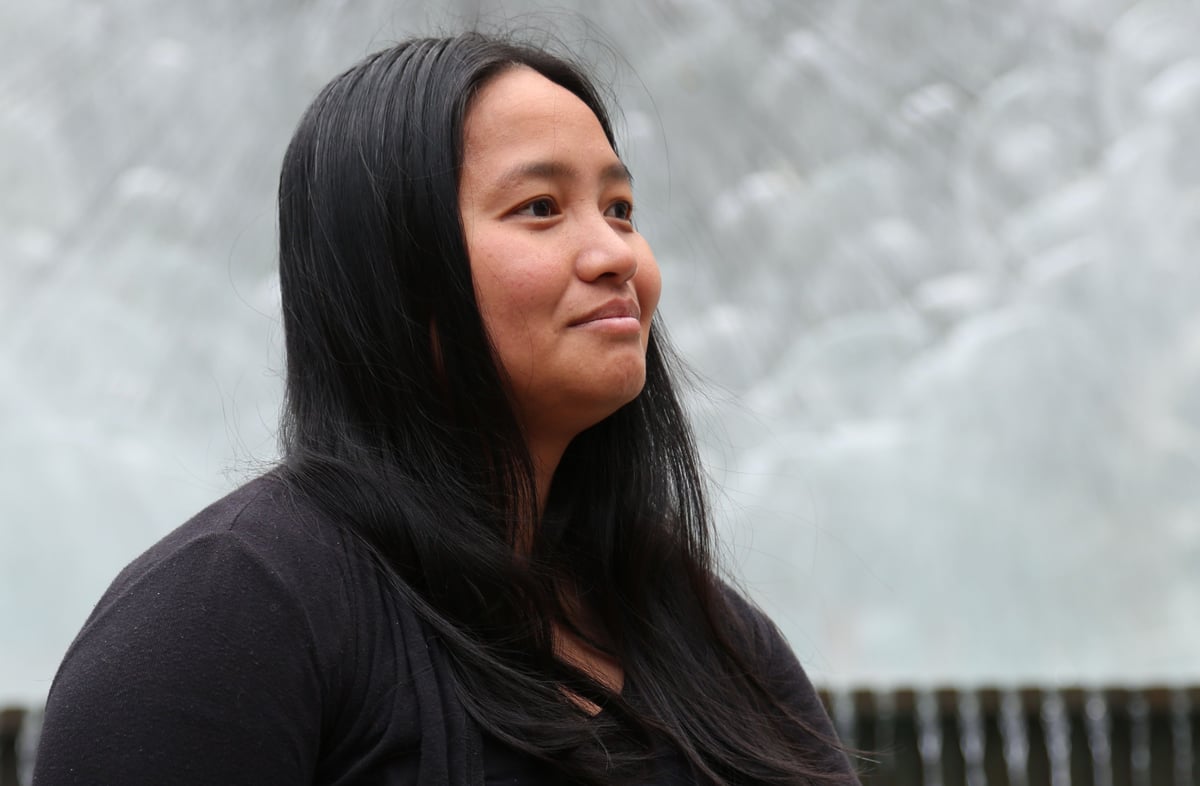 Jai spent 20 years in and out of homelessness. Image: Annette Cohen.

Despite this, she did alright at school. It wasn't until Year 12 that things started to "crash and burn." By the age of 21, she found herself on a bus from Adelaide to Sydney. She'd given a false name, left behind her job as a research assistant and her place in a psychology degree, with the aim to "jump off the Harbour Bridge."

As Jai explained to Mamamia, she was depressed, stressed, and living with the trauma of her childhood. Fleeing to Sydney was a panic reaction to all of those things. But once there, she didn't jump. She instead spent decades in the cycle of homelessness. Only now at the age of 41 can Jai say she's been in her own home for five years. Before that, she'd have stints in short housing stays or refuges, but before long she'd find herself back out on the streets.

"I was in supported accommodation a few different times. But the thing is after that lease finished, nothing came afterwards and so I was back on the street. They don't think about that [the government], they think 'oh yeah, in the refuge you do your three nights and you will automatically receive six months in supported accommodation. Then you'll be transferred into long-term outreach support accommodation for two years and by then housing will have pulled their finger out and you'll have long-term public housing in a suburb that you're happy with. And your life will be together and your mental health stable and you'll no longer jeopardise your tenancy...'."

Of course that's just not the reality. And Jai says Australia's current prevention and intervention strategies need a lot more funding, and greater focus on long-term wellbeing and stability.

She herself has been in and out of mental health facilities since she was an adolescent. She lives with dissociative identity disorder (previously and more commonly known as multiple personality disorder), which she explains comes from having prolonged trauma.

Revisiting her old haunts for the documentary Picturing Home, Jai tells director Annette Cohen, that even now she's still coming to terms with having a place to call home.

Jai points out the parks and sides of churches and 'wet weather' options where she used to curl up for the night. She remembers that not having a plan as night started to fall was always the worst. Having a plan was how you made it through.

But as Jai told Mamamia, it was always the thoughtless unkindness - often the really subtle stuff - that used to hurt the most.

Yes, there were times when rude people would do things like throw items at her and other homeless people. But it was blatantly crossing the street to avoid them, or the snide comments that were far more common.

"If you don't like something, don't say anything at all. Weren't we all taught to say that when we were five or six?" said Jai. "You don't need to berate us, we already feel shit about ourselves."

Even though Jai is no longer 'homeless' she still considers herself connected to that community. Nowadays however, most of Jai's focus is redirected to her photography. The documentary shows her journey to her first solo exhibition, which became a reality thanks to Cafe Art Australia - a photography competition that helps empower people impacted by homelessness. 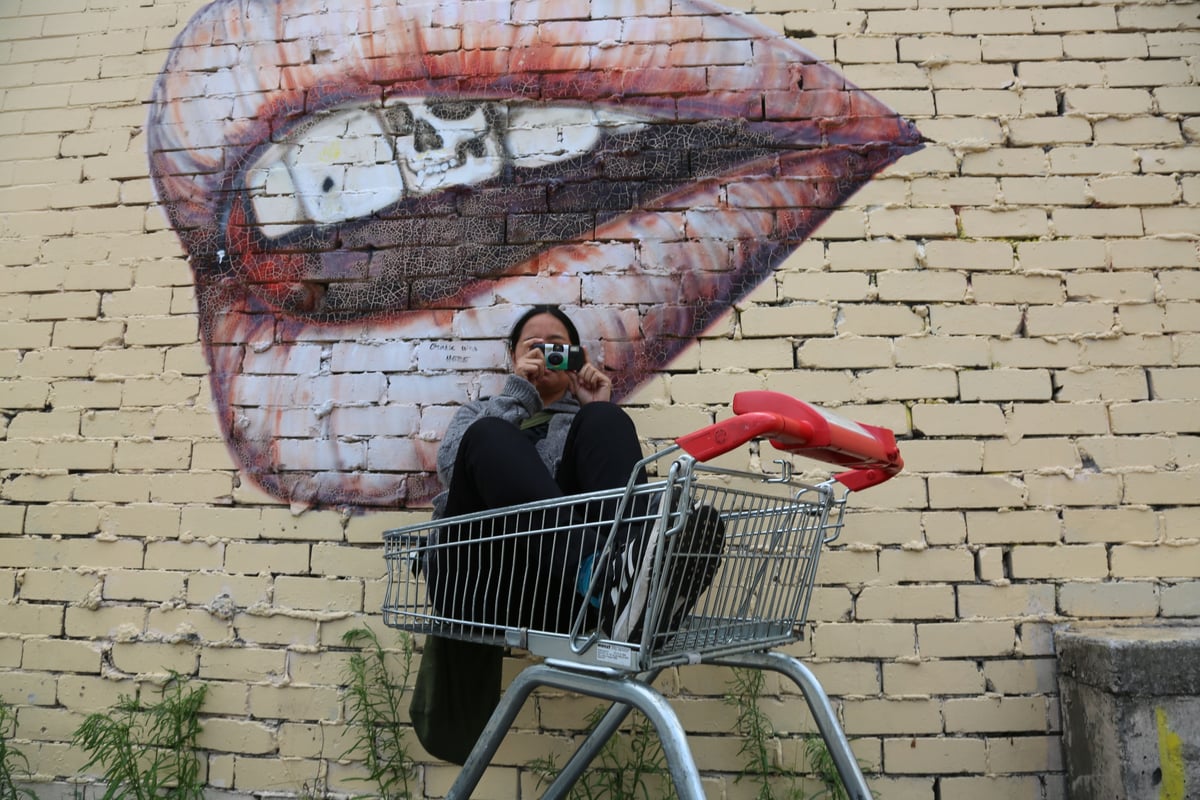 In recent years, Jai has found a love for photography. Image: Annette Cohen.

Having a camera in her hand has given Jai optimism and a sense of purpose. She hopes her story can act as a conversation starter because she believes we can help our own loved ones from falling into the cycle of homelessness by being a part of the prevention strategy.

"I really want people to talk. Talk in their homes. Talk in their workplace. Talk in their community about whatever's going on in their lives. If you feel able to talk about it, then hopefully it won't get to the point where someone in your circle ends up being homeless. Because if you don't ask your friends and they don't feel like they're being heard - then it spirals from there," Jai told Mamamia.

You can find out more about the documentary Picturing Home here, and watch the full documentary here.