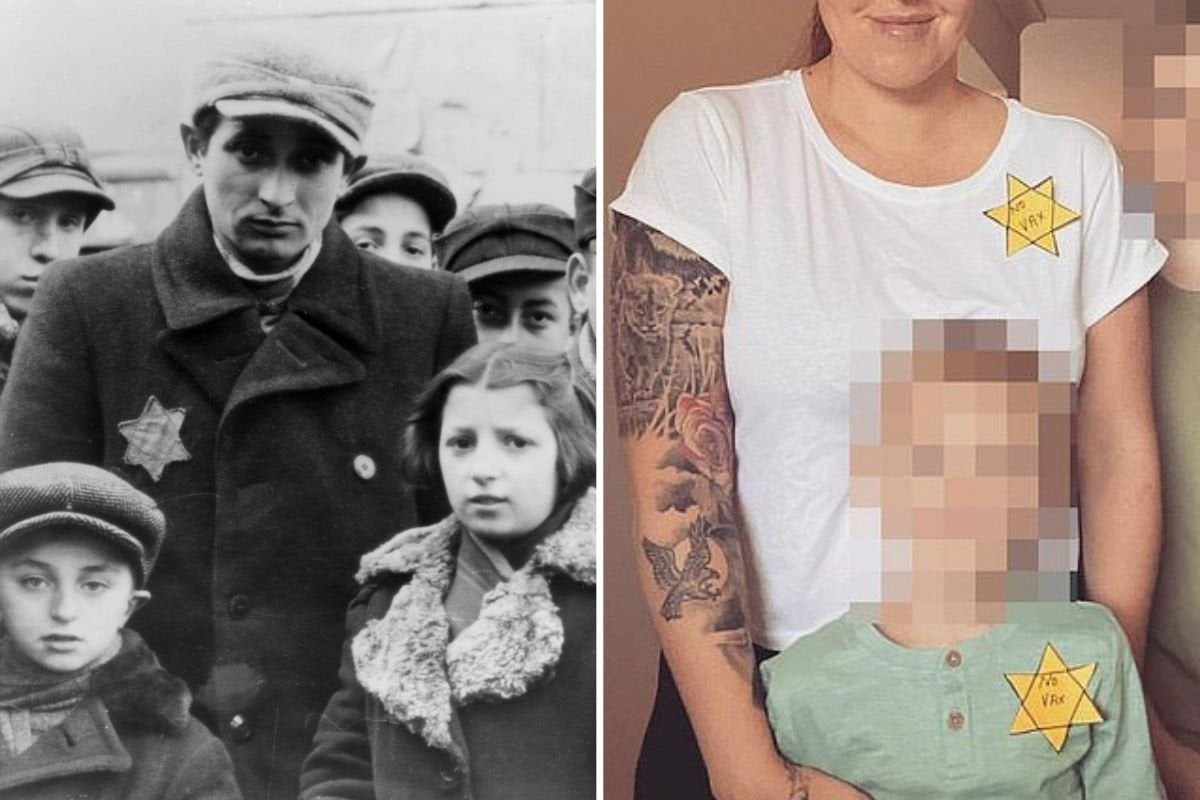 Her name is Lena Baron, my partner’s grandmother, but I call her Nanna too. Together we drink tea, share stories and hold hands.

Her skin drapes over her knuckles like crinkled tissue paper; the years etched deeply into every crease and groove. 97 years of history.

They are hands that were forced to make shoes and ammunition as a slave labourer for German soldiers; hands that received one loaf of bread for a week in Poland’s Lodz Ghetto; hands that were torn from her mother at the gates of Auschwitz-Birkenau concentration camp. And they are the hands that cradled her three children after starting a new life in Australia.

Hands that survived the Holocaust.

Recently, a trend has arisen where the atrocity that claimed the lives of millions is grossly being compared to lockdown rules and restrictions on the unvaccinated.

Earlier this week, NSW blogger Sarah Mills posted a sickening photo with her three children. A yellow Star of David was pinned to each of their t-shirts, accompanied with the words, “No vax”.

The image compared "segregated" Australians – those who choose not to have a Covid vaccination – to Holocaust victims. 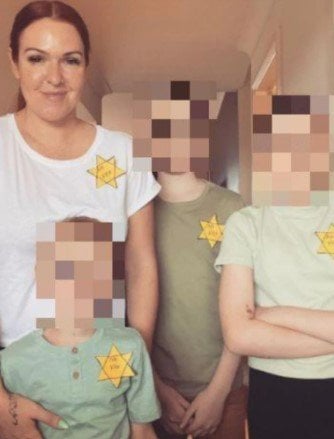 Mills made a subsequent post where she posed in a striped shirt with a numbered sticker affixed. She asked, “…where [do] we get our full uniform? I’ve found the shirt, but wasn’t sure if there’s anywhere you can get them as a set?”. She added, “history is repeating itself”, in a reference to the striped uniforms forced upon prisoners in Nazi concentration camps.

Last month, a swastika and the words, “Stop Dan Andrews” with a Star of David replacing the ‘a’ in ‘Dan’, were emblazoned across a road in the Melbourne suburb of Donvale.

Disgusted to see this on a road in Donvale in Melbourne’s east this morning. Appreciate feelings are running high about the lockdown, but this vile garbage is plain wrong. pic.twitter.com/AbruPBnnnB

In August, leaflets were distributed in letter boxes in Sydney’s Neutral Bay, comparing lockdown rules to the Holocaust.

In the same week, a western Sydney mayor, Steve Christou, posted an infographic explaining lockdown restrictions on social media, alongside the caption, “Welcome to Nazi Germany” (he later apologised and removed the post).

Stickers stating, “No jab, no job” with swastikas were seen plastered in the Melbourne CBD and several suburbs. Meanwhile, placards depicting WA premier Mark McGowan as Adolf Hitler were displayed alongside yellow Star of David symbols at an anti-lockdown protests in Perth, and on the New South Wales-Queensland border.

This issue goes beyond Australia. A few weeks ago, popular personality Joe Rogan posted a video on his Instagram account that appears to equate proof-of-vaccine requirements with the Holocaust. The video features a commentary on freedom and is set against a montage of images that include Hitler, marching Nazis and Jews being beaten in the streets.

The yellow Star of David badge was also worn by anti-lockdown and anti-vaccination protesters at rallies in Berlin, London and Prague. Earlier this year, the Libertarian Party of Kentucky tweeted, "Are the vaccine passports going to be yellow, shaped like a star, and sewn on our clothes?”.

This is beyond offensive.

Anti-vaxxers and anti-maskers comparing themselves to Jews during the Holocaust is disgusting.

Republican congresswoman Marjorie Taylor Greene likened a mask mandate on the floor of the House of Representatives to a time when “people were told to wear a gold star… and were taken to the gas chambers”.

The “people” to which Greene refers are mine. And as a Jewish person, her use of ill-formed analogy is deeply offensive and upsetting, as are all of these examples.

The act of publicly marking and differentiating Jews invokes a long and painful history, hearkening back to the Middle Ages. In 1217, English Jews were forced to distinguish themselves with white linen badges, which later evolved to the colour yellow. Similar mandates occurred in 13th century France and 15th century Germany.

Imposing a badge upon a group of people is a dehumanising act used to control, incite discrimination and oppress.

It diminishes the cruelly inflicted suffering of Jewish people - many of whom were shot dead on the spot if they refused to wear the yellow star in Nazi Germany. 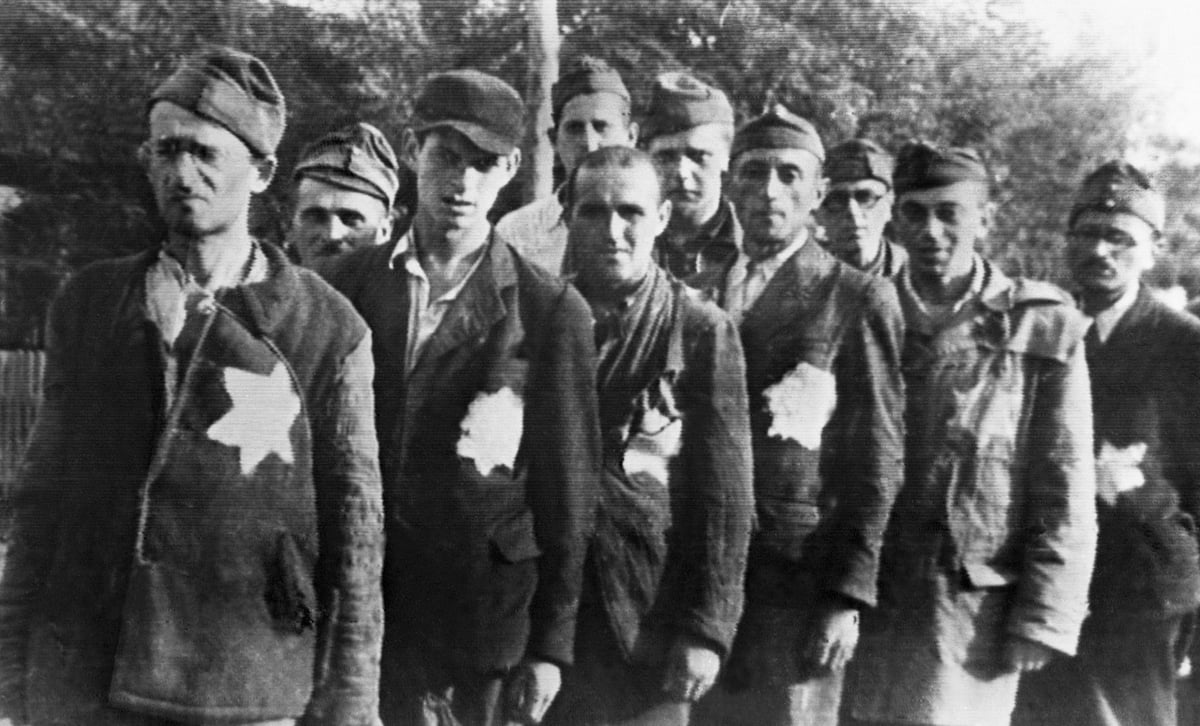 Forced to wear the six-pointed Star of David on their uniforms, six million Jews died in the Holocaust. Image: Getty.

No one is being shot for choosing not to get vaccinated.

As a Jewish person, it is triggering to see this symbol, imbued with hundreds of years of trauma and persecution, exploited by those who wish to pedal their own agenda.

Have your opinions, sure. But do not appropriate the suffering experienced by marginalised groups who were targeted for nothing more than their identity, their existence.

Any such crude false equivalence trivialises the murder of six million and the indescribable torment of those who survived - often the only individuals to do so in their entire families. The Holocaust - or any genocide – is not fodder for argument or amusement. It is heartachingly painful.

Acknowledging the trend of misused Holocaust imagery, Chairman of the Anti-Defamation Commission, Dr Dvir Abramovich affirmed, “To equate the targeting, humiliation, segregation, and ultimate annihilation of the Jews to the situation of the anti-vaxxers… is not only an outrageous act of moral degeneration and distortion but it also downplays the horrors of the genocide.”

“Individuals can advance their ideas and opposition without minimising the atrocities… of the darkest chapter in human history.” 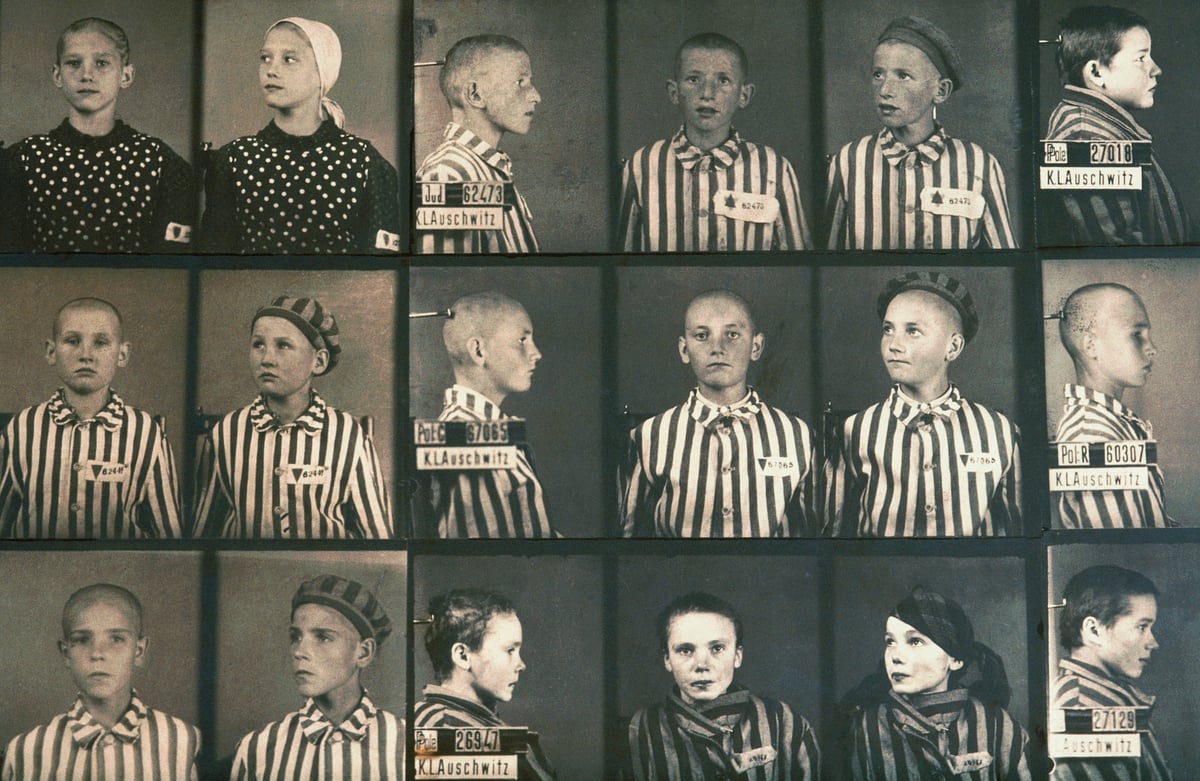 Head of education at Melbourne’s Jewish Holocaust Centre Simon Holloway agreed, stating that while he respects “a broader discussion” about ongoing restrictions, “this particular analogy creates a false equivalence that impedes a proper appreciation of history.”

“We encourage people to learn more about the Holocaust and expect that, in so doing, they will cease to invoke it in so frivolous a manner,” he said.

Such acts conjure a trauma that is not contained to the past, but is strongly embedded in the fabric of Jewish collective consciousness. It is part of our present, as we pledge to never forget the atrocities and lives lost. For survivors, the agony of loss persists; and intergenerational trauma continues in their second and third generation descendants. 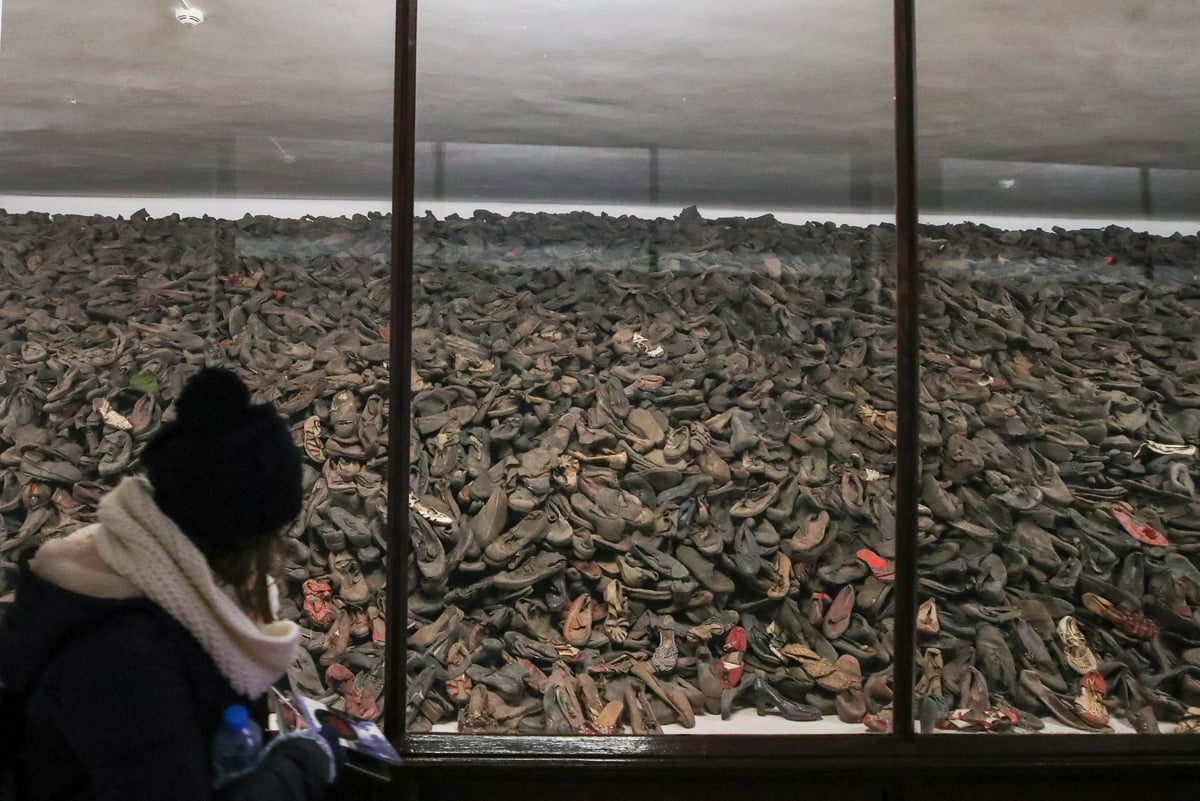 Shoes of prisoners on display in the Auschwitz-Birkenau State Museum at the former Auschwitz concentration camp operated by Nazi Germany during WWII. Over a million Jews, as well as Soviet and Polish prisoners, were killed in the camp's gas chambers. Image: Natalia Fedosenko/TASS/Getty.

Nanna continues to clasp my hand. “People should not compare. That a person can do this, is upsetting. Very upsetting,” she says, agitatedly shifting in her chair.

There is no comparison between the Holocaust and the restrictions that have been put into place in order to try and protects society’s most vulnerable.

Their family members are not being murdered. They have choice, and an opportunity for unity.

This week, Australia mourned the enigmatic 101-year-old Holocaust survivor, Eddie Jaku. The words in his book, 'The Happiest Man on Earth', remain a poignant call to action:

“Your efforts today will affect people you will never know. It is your choice whether that effect is positive or negative. You can choose every day, every minute, to act in a way that may uplift a stranger, or else drag them down.”

“The choice is easy. And it is yours to make.”

Reply
Upvote
1 upvotes
Great article Rebecca. I also think that WW2 and it’s veterans should not be used by the far extremes of politics and antivaxxers. Minimising what happened in WW2 history is disgraceful. An entire branch of my family does not exist now because my great uncle was killed fighting for Australia. He never married his fiancé. That generation would be fighting the pandemic with vaccines, looking after our community and their neighbours. They would say trust your GP.
F
flyingdale flier 8 days ago