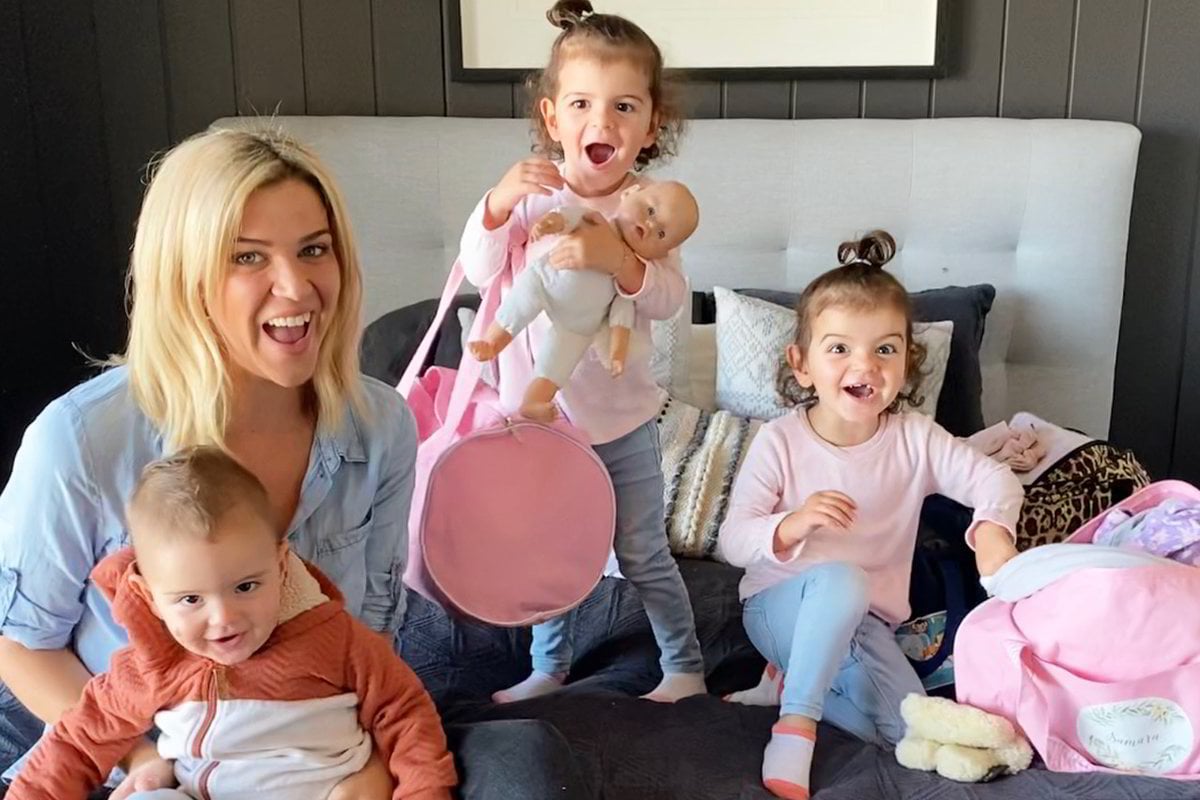 Thanks to our brand partner, Stayz and Tourism Australia

When I first thought about taking a road trip with my family for the weekend, I found myself trying to find every excuse as to why it would be too hard and not worth the trouble.

For starters, packing bags and a car for a weekend away with three toddlers is like a high-speed, never-ending game of Tetris. So. Much. Stuff.

The last holiday we went on was last year and Banjo couldn't walk yet, so at least that was only two out of three minions that were mobile. Not to mention, taking a two-hour drive with the kids would mean two hours of arguments over which Frozen song we have to listen to. AGAIN.

And also... I was in the midst of throwing myself a pity party since my husband and I should have been on a two-week, child-free Euro trip of a lifetime right now, which for obvious reasons didn't go ahead.

But honestly, these problems are micro compared to what many Aussies have been through this year.

From savage bushfires to ﻿COVID-19, we've seen regional communities and their small businesses - particularly tourism operators - completely devastated. They need us more than ever, now.

That's why we took the #RoadTripPledge. It's a campaign launched by Stayz in partnership with Tourism Australia encouraging us to holiday here this year, and take whatever time out we have to support the local towns that depend so much on us being there.

So, we did. With our three kids under three and half the house packed into a car, we drove down the NSW South Coast towards our destination: a homely Stayz beach house in the laidback seaside enclave of Thirroul.

And there we were. Less than two hours from our own house, we timed the drive with the kids' naps so that we basically pulled up at our weekend getaway home as they all woke up. Win number one.

We stayed in a modern, two-storey duplex that felt so brand new I think we might have even been the first to stay in it, and I must admit the place was even better than the photos. Win number two. 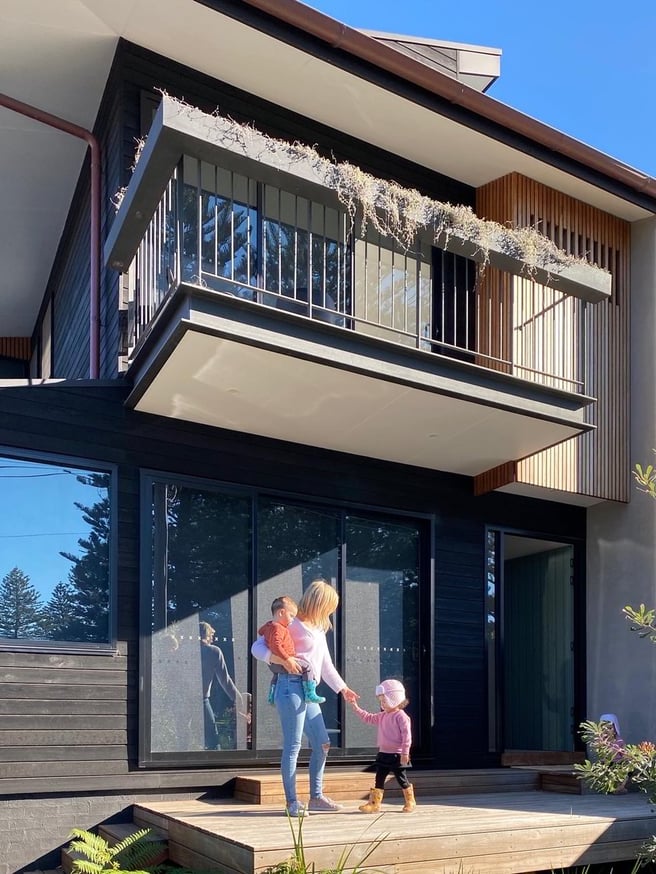 Enjoying our home for the weekend. Image: Tegan Natoli/Stayz. 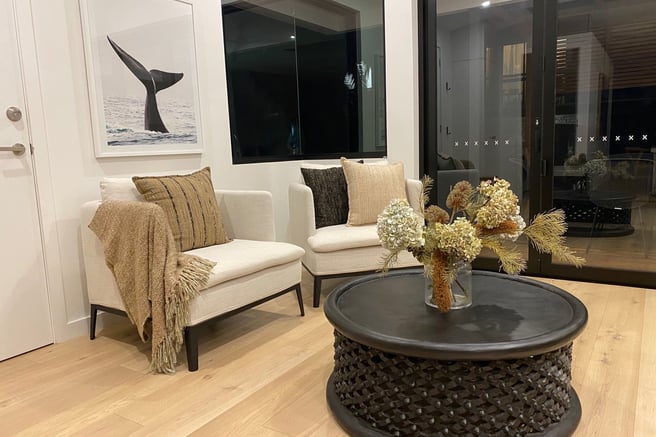 Definitely not what my living room looks like with these toddlers around! Image: Tegan Natoli/Stayz.

The whole house was a complete novelty for our three toddlers. With a great little yard for the kids, fun bunk beds and even some lovely books and toys left by the host for them to play with, the kids made themselves right at home.

But the best part was the location. Thirroul is a gorgeous coastal town, and we were lucky to be walking distance to EVERYTHING.

Us city slickers usually have to drive to the corner store, spend 10 minutes finding a park (which is often further away than our house) and then pay $10 for the parking. Lo and behold, we didn't use our car once the whole weekend.

We had the coast's best playground literally across the road from our house and just behind that was the beach. 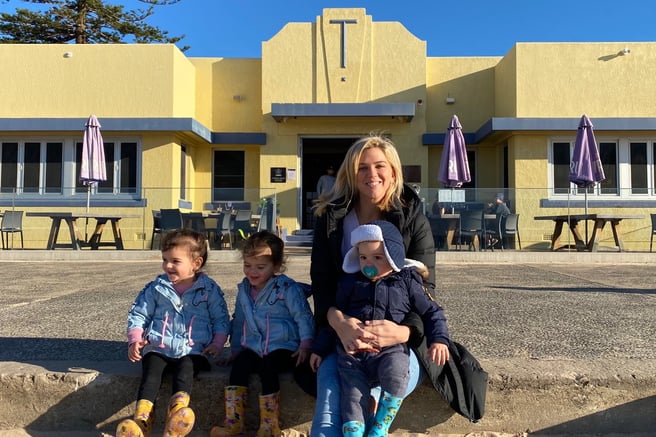 Outside the historic Thirroul Beach Pavilion, which first opened back in 1940. Image: Tegan Natoli/Supplied.

We could walk to the local shops, cafes and restaurants and the Bottle-O. On the first night, we went for dinner at the local club called Headlands where kids were greeted with colouring packs, and I had a chicken schnitty and glass of wine (what more do you need?). The next night, we got local takeaway, which was easily the most delicious meal I'd had in a long time (possibly because I didn't have to cook it).

When you do get away, you find yourself doing wonderful things you would never do at home. Instead of slothing around in bed or in front of the TV because it was a bit cold outside, we put on our coats and gumboots and walked along the beach playing in the sand and collecting treasures. 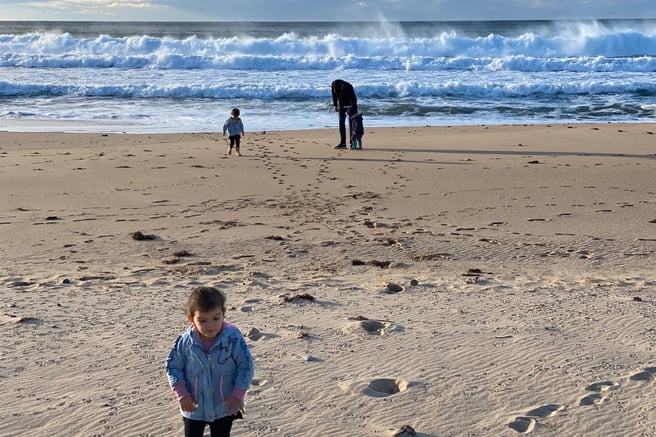 What have you found? Image: Tegan Natoli/Supplied.

We got breakfast at the surf club kiosk and chatted to the locals while watching the beautifully fierce waves and breathing in the fresh winter air. It was windy and freezing and so awesome.

It felt like I was on an overseas holiday, even if it wasn't the European summer we had planned. We get so caught up in catching planes hours and hours away that we forget what is right here.

Being stuck inside for the most part of the last four months has certainly made me appreciate and make the most of the opportunities to go to new places, see new things, and most of all, support our Aussies doing it tough.

﻿Take t﻿he Stayz #RoadTripPledge at www.roadtrippledge﻿﻿.com.au. ﻿Once you take the #RoadTripPledge, spend $1000 or more on your regional Stayz booking and you can claim a $100 Visa Card. This offer is only for the first 1000 eligible bookings and ends on August 11 (unless gift cards ru﻿n out sooner).

Tegan Natoli is the co-host of Mamamia's podcast for parents, This Glorious Mess: Little Kids.

Make your #RoadTripPledge to holiday here this year and help us regenerate regional Australian towns.