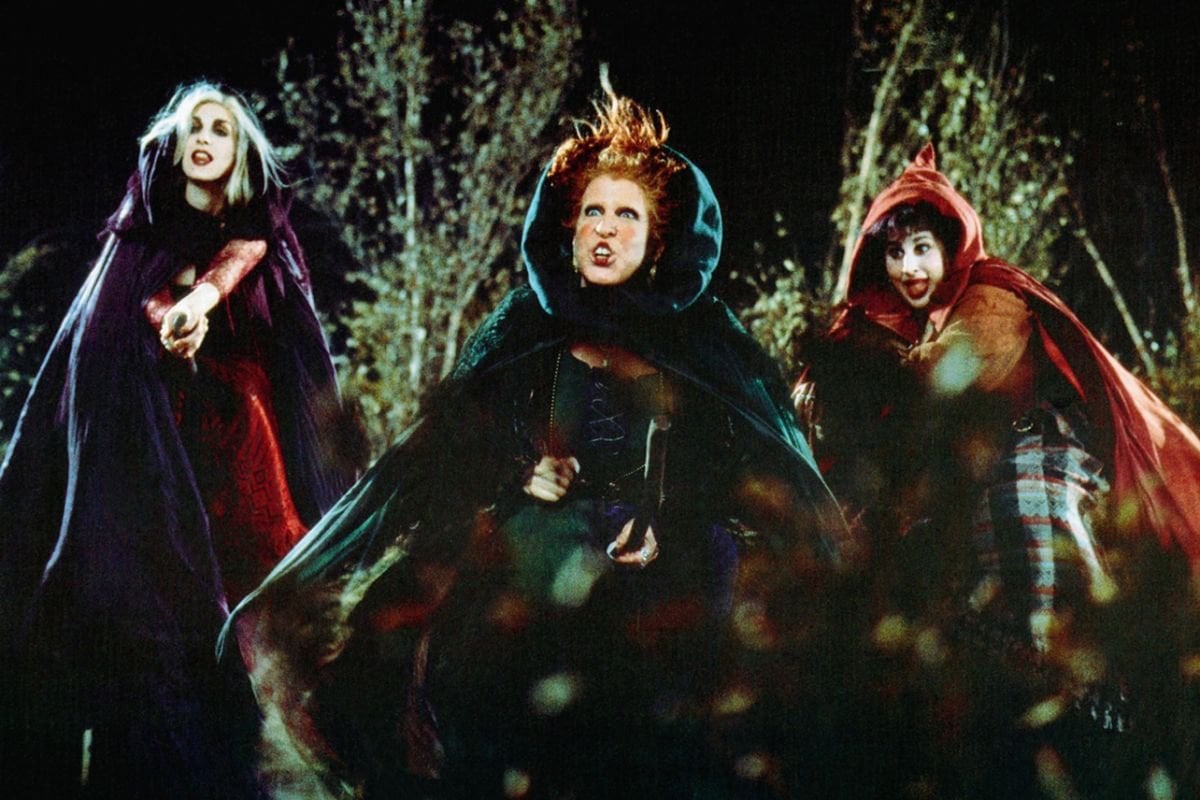 In case you missed it, Hocus Pocus is returning to our screens for a sequel next year and it's safe to say, here at Mamamia we are very excited about it.

We were first introduced to the Sanderson sister witches a whopping 27 years ago when the hilarious trio were accidentally resurrected by a teen on Halloween night.

They've been a staple in our October rituals ever since.

Watch the trailer for Hocus Pocus. Post continues below.

With Halloween right around the corner and a sequel on the horizon, we've been feeling very nostalgic about our favourite Halloween film, so we thought we'd take a look back at the seven things you didn't know about Hocus Pocus.

In a 2018 interview with Bloody Disgusting, makeup and special-effects designer Tony Garner explained that Doug Jones (who played Billy Butcherson in Hocus Pocus) had to wear a "mouth rig" in his infamous moth scene... because the moths were very much alive.

"There was a small hole in the very back of the pocket so that Doug could cough some air through it... An animal wrangler would place several moths in the pocket with tweezers… Then the stitches would be glued shut, and we'd run out of frame so that they could get to the shot as fast as possible," he said. 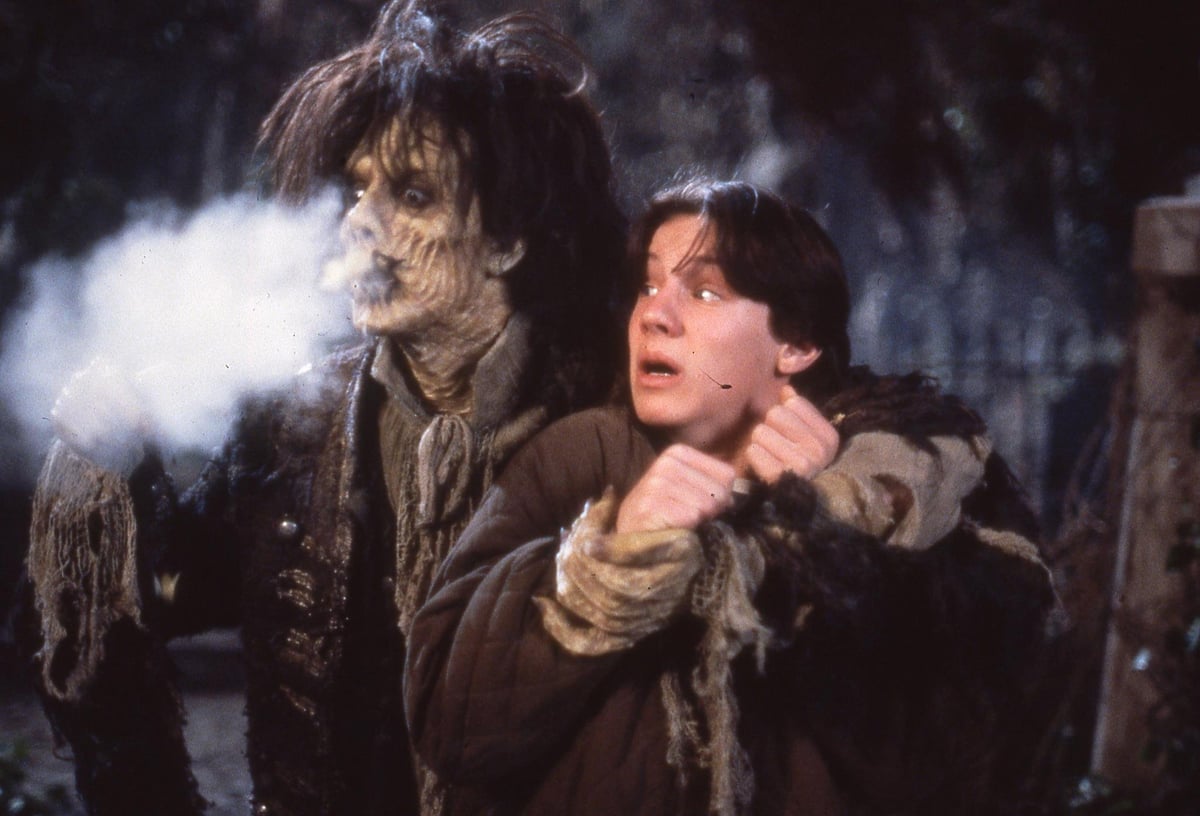 "What I had written originally was about 12-year-olds," Mick Garris told Entertainment Weekly in 2017.

"The kids being younger and in more jeopardy was certainly something more explicitly frightening."

In that version the film was titled: 'Halloween House'.

According to the film's photographer, Peggy Holmes, each witch was to fly their broomsticks "in character".

In an archived press release Holmes said: "Winifred is in charge and much more aggressive than the other two. She's always leading the way and looking for children.

"Sarah loves to fly. She's always lifting up with her mop and can't wait to get up in the air, whereas Mary is more cautious. Like a good driver, she signals with her hand. Mary is the safe and steady flier."

This makes so much sense on second watch.

In a 2019 interview with Glamour UK, costume designer Mary Vogt explained that each witch had their closet tailored to their personality, and Bette Midler was particularly unique.

"When I talked [to director, Ortega] about my vision for Bette, I said, 'You can't put her in some black witch outfit. You have to put her in something that's colourful and fun and has a little sparkle to it'," she said.

"So when I did sketches and talked to Kenny about it, he responded, 'Now let me talk to Bette, because this might not be what she was thinking of'," she continued.

"So he talked to Bette, who said, 'Well, of course. I'm not going to wear some black dress'."

In the same Glamour UK interview, Vogt explained that Hocus Pocus didn't get the warm welcome they'd expected from audiences.

"The thing is, when the movie first came out, it was not successful," she said.

"I remember I went to one of the early screenings, when the studio people were there. When the cat dies in the film, all the little kids started crying. So the studio people were like, ‘Oh, my God. This movie makes kids cry. Forget it.’ I don’t think the studio was behind it. But when it got on television, a younger generation of people started to watch it and like it. And then it had a life, which was at least five years after the movie came out."

The film's director, Kenny Ortega, expressed a similar sentiment in a 2020 interview with Forbes:

"Honestly, at that point [when the movie premiered], I thought it's all over for me.

"I thought to myself, 'I'm never going to get a chance to do this ever again. My career as a filmmaker was all over.' Then, over the years, everything changes.

"What I've learned is don't give up. I believed in Hocus Pocus, the girls believed in it, and even though it wasn't found by audiences immediately, the generations have believed in it."

It was inspired by a bedtime story.

Hocus Pocus was inspired by bedtime stories that producer and cowriter, David Kirschner told his kids growing up.

"Halloween is a huge deal in our home, and it has been since our daughters were little," Kirschner told Yahoo in 2015. "It speaks to me in a way that becomes so emotional for me and always has."

He then went on to pitch his story to Walt Disney in 1984.

A sequel is on the way.

After a good deal of speculation, Bette Midler confirmed a sequel was on its way in May.

Sistaaaahs! It's been 300 years... But we’re BACK! 🧹 #HocusPocus2 arrives Fall 2022 on @DisneyPlus. pic.twitter.com/OFMTlfjCDq

Both Sarah Jessica Parker and Kathy Najimy have announced they will return to the film as well.

While Najimy said: "The people have spoken: I smell children... again."