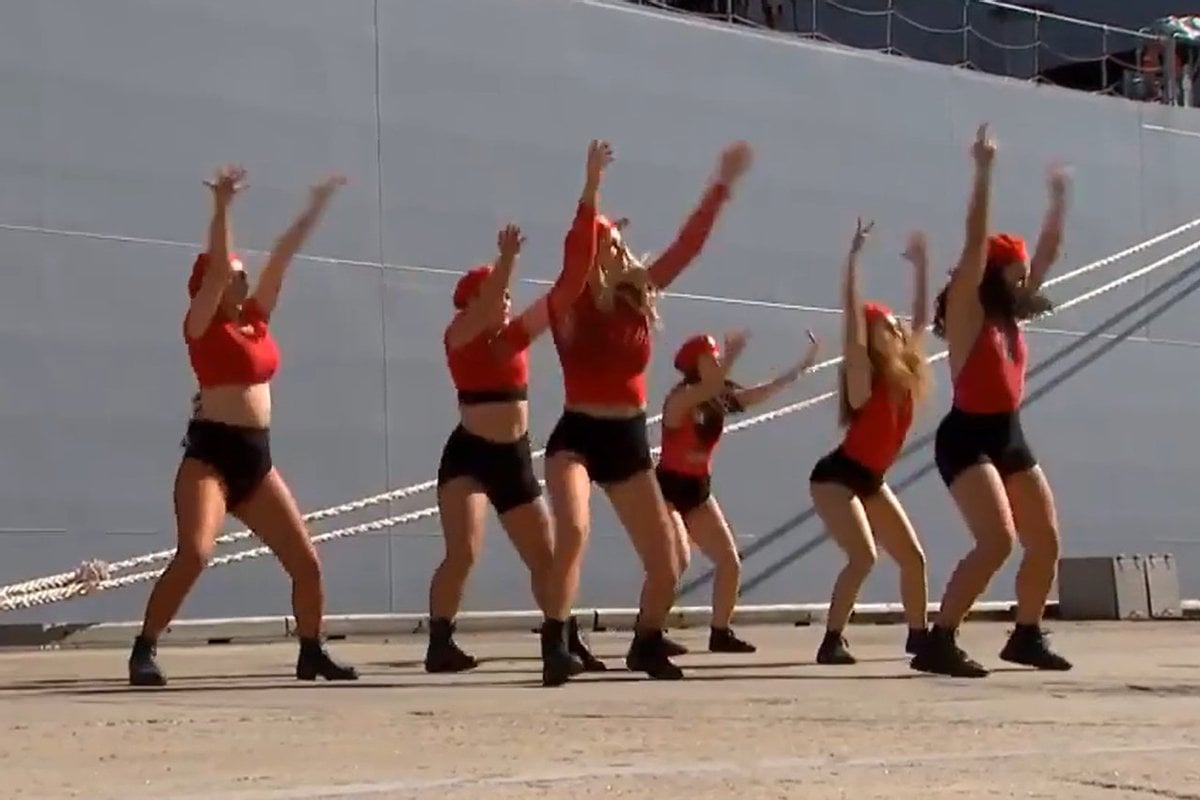 On Saturday, on the edge of Sydney Harbour, a formal ceremony was held to officially commission the HMAS Supply - a $2 billion addition to the Royal Australian Navy.

It was the kind of event that conjures up words like 'pomp' and 'fanfare.' A formal do, attended by Navy officials, the Governor-General and Federal MPs.

It's not uncommon to have a performance or two at an event like this. While a 'Welcome to Country' ceremony involving Indigenous Australians usually takes place to celebrate the commissioning of a new ship, instead a local Sydney dance troupe 101 Doll Squadron was booked - a group known for 'reggae', 'afrobeats' and 'hip hop'.

Watch: A snippet from Saturday's performance. Post continues after video.

Their website offers dancers for hire for things like hen's parties and corporate team building workshops. Girls in leotards and video clips featuring 'Queen Bey workshops' are visible on their landing page.

On Saturday, seven dancers from Studio 101 turned up for a job they'd been booked for. They wore tight black shorts and red midriff shirts and their movements included thrusting and twerking and jumping. Choreography evident in most of their routines available to watch online.

This week, videos from their weekend performance have gone viral on social media. Their moves have been described as "inappropriate" and "bizarre."

"Standards in the ADF, and definitely when commissioning a ship, should be a little bit higher than that," former soldier and Liberal MP Phillip Thompson told the ABC.

"We’ve got the CDF, we’ve got members of Parliament there, and the Governor-General’s there, I don’t think it’s appropriate to be twerking."

Social media users have pointed out: "There's kids in the audience! Disgraceful!"

Others have asked: "How is this considered appropriate ‘entertainment’, or whatever this was meant to be?"

One declared: "This is bloody awful... the role of women in the ADF? Twerking dancers?? Really? This is the message we want to send girls & boys in 2021?"

A defence spokesperson told Daily Mail Australia the dance was arranged to engage with the local community and preceded the formal part of the ceremony.

"HMAS Supply and the Royal Australian Navy are committed to working with Australians from all backgrounds in actively supporting local charities and community groups," they said.

"The dance was performed prior to the commencement of the Commissioning formalities and prior to the arrival of His Excellency the Governor General, Chief of Navy and Commander Australian Fleet," they added.

This ship is supposed to be the replacement for HMAS Success, which has been embroiled in a sexual assault and harassment scandal, where some have been accused of treating women like "objects," as was reported by the Sydney Morning Herald.

A special and historical day as we welcome #HMASSupply II into our fleet. Our new addition brings a huge capability to #AusNavy. Her contemporary on board systems make quick work of supplying and replenishing ships and enhancing our capability at sea. #YourADF pic.twitter.com/AdpZbu8gRF

But dance troupe 101 Doll Squadron does not deserve any vitriol for baring their flesh and busting their moves at a formal ceremony. They don't deserve the blanket media coverage pointing fun and criticising their moves. This is not their doing.

They just turned up to work, and did their job.

Any complaints should be directed at the people or person who booked them. Because in the context of what these women are usually hired to do, their performance was not "bizarre."

Because anyone that visits their website can see plain and clear what their services are designed for: Hen's parties. Workshops. Birthday parties. Flashmobs.

In a statement released on Thursday, 101 Doll Squadron said they have been under "personal attack on all media platforms since the weekend and we now feel unsafe."

They claim that videos that are going the rounds in the media have been misconstrued and were filmed from angles that were "creepy" and which were not seen by the audience.

At the end of the day, these women were just doing their job.

They showed up to an event they'd been booked for. And performed.

And now they've had to shut down their social media pages, after being mercilessly ridiculed like they've done something wrong.

Reply
Upvote
All I see is snobbery by old men (and some women) stuck in the 19th century. Ballet dancers often perform in government run events, nobody complains about those scantily dressed women & men. But choose to dance a style that has its roots in African dancing, and has connections with the local community and these fusspots need to smell the salts to get them out of their apoplectic state.
G
guest2 8 months ago

Reply
Upvote
5 upvotes
@zaky You can't honestly count twerking as up there with a cultural dance display. And I'm curious: exactly what "connections with the local community" do twerking and grinding have...?
Z
zaky 8 months ago

Reply
Upvote
2 upvotes
@guest2  as a white middle aged male I love ballet. However it is an art form that demands from its artists, especially the women performers to be anorexic, suffer from eating disorders and destroy their feet to fit a certain aesthetic.  For that it is considered superior to a dance that has its origins in African tribal dancing.  As I said,  pure snobbery.
C
cat 8 months ago

Reply
Upvote
6 upvotes
These dancers were great, this is such a non-issue. Someone made a weird booking decision and a bunch of pasty men spent 3 minutes feeling awkward. What’s the actual issue? Why are we talking about a group of dancers instead of ‘war hero’s’ committing war crimes?
K
kiwicat 8 months ago

Reply
Upvote
2 upvotes
@cat I don't believe the pasty faced men saw the dancers as they were part of the pre ceremony entertainment.
K
katp 8 months ago

Reply
Upvote
5 upvotes
@cat if I were a female in the Navy, battling the gender discrimination and sexual harassment while wanting to be resprected as a human and treated as a professional, I can imagine being made very uncomfortable by a performance like this.
C
cat 8 months ago