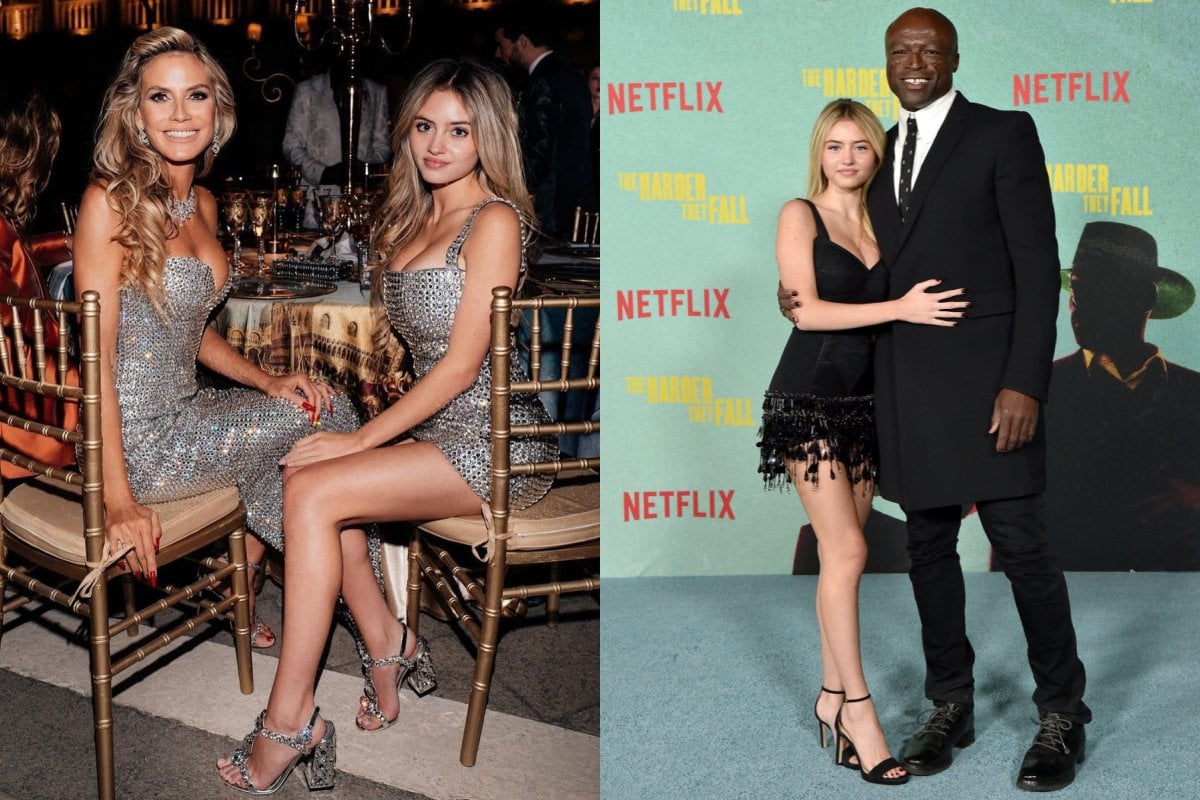 Heidi Klum's eldest daughter Leni is all grown up.

This week, the 17-year-old model attended the Los Angeles premiere of The Harder They Fall with her dad Seal, striking such a resemblance to her supermodel mum. 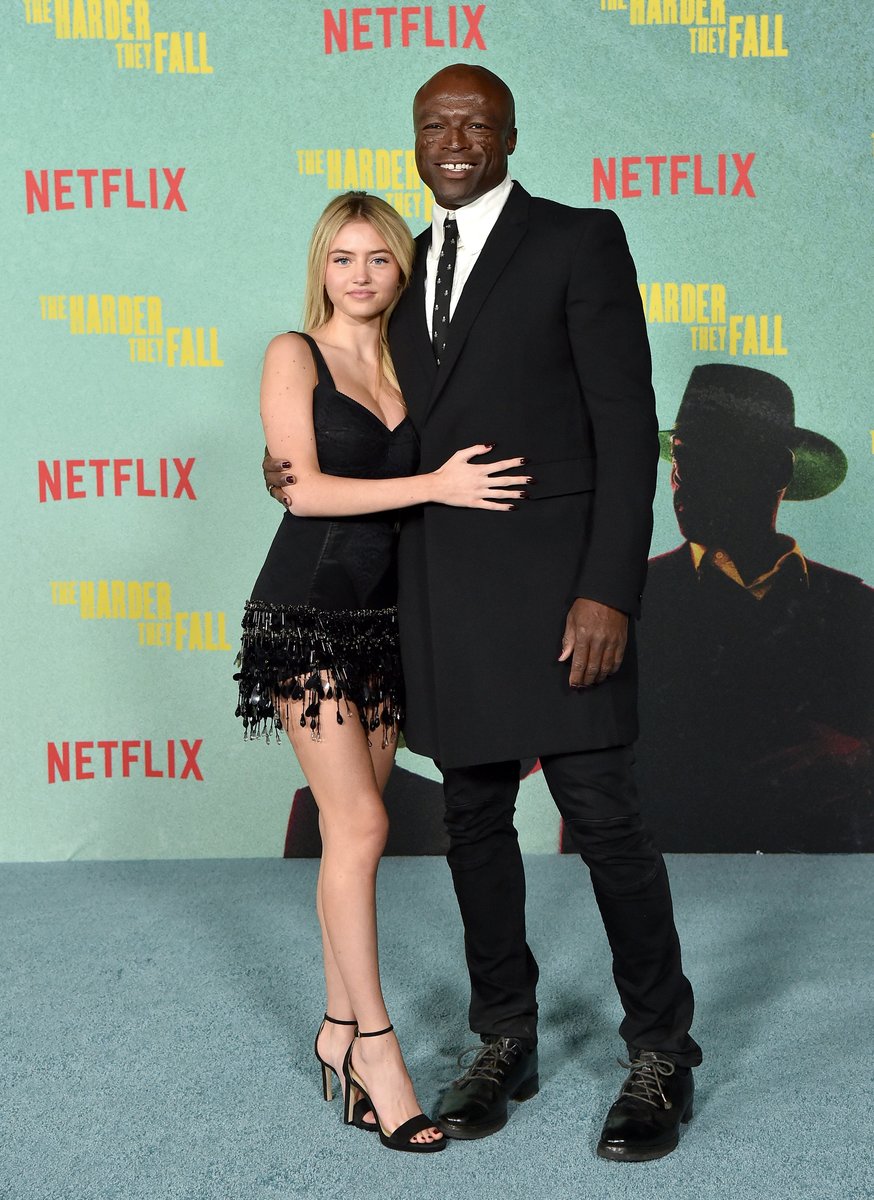 Leni Klum and Seal at the premiere of The Harder They Fall. Image: Getty.  It was the first time the father-daughter duo stepped out on the red carpet together.

Speaking to ET, Seal said taking Leni to the event was "one of the proudest moments of my life."

Back in December 2020, Leni made her modelling debut on the cover of Vogue Germany, alongside her mum.

Sharing the news to Instagram, Leni wrote: "So excited for my first cover!! I had so much fun on set with @voguegermany couldn’t dream of a better start!! Thank you for being by my side @heidiklum."

While her proud mum shared a post of her own.

"I'm so proud of you," Klum began. "And it's not because you've chosen your own path. I know, that no matter which path you were to go down, you would be your own woman. You always know exactly what you want and what you don't want. You are my little mini me. And I'm so happy for you, that you now know who YOU are."

The mother-of-four continued to explain that being her daughter isn't always easy.

"You never had the opportunity to grow up 'normally'. But what is normal? Growing up with three different daddies probably wasn't either. But you have the talent to get the best out of everything. And I would say: none of it harmed you - on the contrary: you are a self-confident young woman who fights for her goals. And even more important: you are a really great person with your heart in the right place," she wrote.

Since the cover shoot last year, Leni has been building up her modelling portfolio.

In just this year alone she's made her runway debut at Berlin Fashion Week, appeared on the cover of Glamour Germany (exactly 20 years after her mother did) and walked for Dolce and Gabbana’s Alta Moda show in Venice.

In September, she was the cover star for Rollacoaster magazine's Autumn/Winter issue, shocking fans with just how grown up she looks for 17.

In March 2003, Klum fell pregnant with her first child, Helene (nicknamed Leni), with Italian businessman Flavio Briatore. But it was after the couple split and Klum began dating singer Seal that her daughter was born.

Seal was present at the birth, and according to Klum, raised Leni as his own. He legally adopted her in 2005 when the couple got married.

Briatore was not involved in Leni's life until recently when they reunited in Italy.

"Leni is my natural daughter, but the three of us happily agreed that it made more sense if Seal adopted her because a child needs to grow up in a family," Briatore told Italian newspaper Il Corriere della Sera in 2016.

"Heidi, Seal and I have built an amazing relationship."

In January 2012, the couple announced they were separating after seven years together. The divorce was finalised in October 2014.

Both Klum and Seal continue to co-parent together. However, it isn't always easy.

"It's not all rosy-rosy. It just isn't," Klum told Red last year. "So sometimes it's hard, but then you have to all come together as a family and sometimes everything is just like hopping on clouds. It's just the way it is."

Four years after their divorce, Klum announced she and Tokio Hotel guitarist Tom Kaulitz were engaged. The couple married in February 2019.

And thankfully, the children and Kaulitz get along.

"You see so many times that someone falls in love and then it doesn't gel as well, so I'm so happy and grateful that everyone is happy with one another," Klum told Red. "That he is cool with my kids, my kids are cool with him."

During the pandemic last year, Klum, Kaulitz and the four children travelled to Germany.

However, in order to get the whole family there, Klum had to file an emergency motion, claiming that Seal wouldn't allow his children to travel to Europe with her for work amid the coronavirus pandemic.

A week later, the couple settled on a custody agreement that would allow the children to go.

In the custody agreement obtained by People, Seal would be given extended time with his children upon their return and be allowed to visit at any time while they were in Germany.

Despite Leni following in her mother's footsteps now, Klum has always been extremely private when it comes to photographs of her children.

"She [Leni] is old enough now," Klum told People about allowing her daughter to model.

"I always thought she was too young. We always also decided to keep the children out of the public eye. But she's driving a car now, she's 16, so I figured if you can do that, you can also model now if this is what you wish to do."

"Obviously, as a mother, [I want my] child to do what she wants to do. The industry is great and I love it and I've been in it for over 20 years but it's also, it's a lot of travelling, it's different. You have to be a strong person, especially as a woman you have to be very strong," she added.

As for her other three children, Klum only shares photos of them if their faces are covered or they aren't looking at the camera.