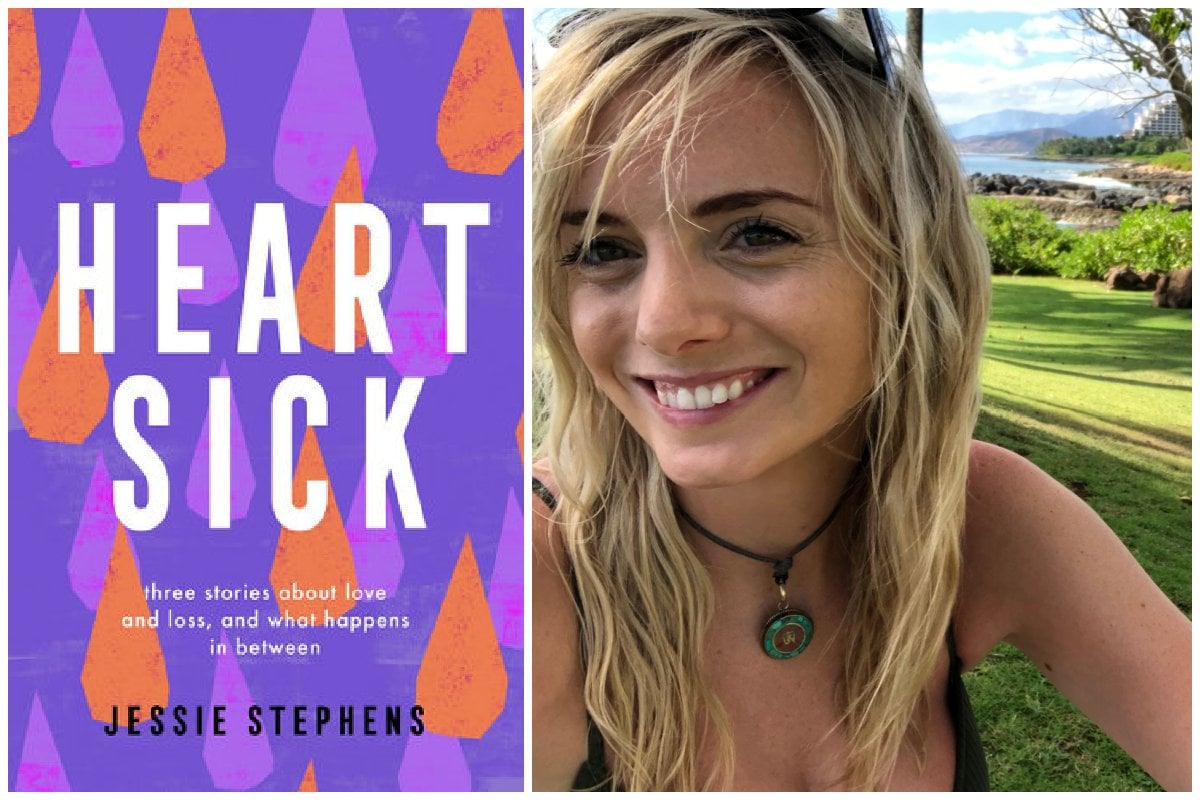 Joshua and I met through a friend.

Our first date was at a saloon-style hipster bar in Newtown he’d suggested and I pretended I’d heard of when I hadn’t. I wore red lipstick but wiped it off on the train, deciding it was too much. I was late and he was sitting with his back towards me when I walked in. There were lamps hanging from the walls illuminating every table that softened our faces and made our eyes look colourless. I told him stories about the school I was working at that made me sound as though I was a good teacher. He was a musician, which made me look at him differently. Like he could access a world I couldn’t.

Alain de Botton writes in Essays in Love, ‘Perhaps it is true that we do not really exist until there is someone there to see us existing, we cannot properly speak until there is someone to understand what we are saying, in essence, we are not wholly alive until we are loved.’ I did not know what my life looked like at twenty-four until I had him to perform it to. He forced me to construct a narrative in which my life was wonderful. The kind of life you’d want to get closer to. It was an experience I very much enjoyed, even if it was contrived and entirely for another person’s consumption. As we messaged back and forth, I began to wonder: does a student even say something funny, if there is no Joshua to recount it to?

And so we met again and I behaved like my week had been full of things that weren’t him. I became the person he saw me as. It was as though every moment we spent together he was composing a sketch and I was contorting myself to fit inside the lines. Falling in love is an exercise in narcissism as much as it is anything else. I liked him. But it was the person I saw reflected in his eyes I became most addicted to. She began to look more beautiful. She was funny and clever and suddenly her life was this quirky screen- play with interesting characters and subplots. This protagonist, with her eyes and her hair and her laugh, was lovable. She had idiosyncrasies that were accidentally lovely. But the problem with lovers is that we’re not seeing a person but an illusion, and then we try to live up to those illusions only to discover we’re too human.

Everything I’d done up until that point, I decided, was in preparation to meet him. Every country I’d visited and every subject I’d studied. The time I put my shoes in the microwave as a three year old and then called out to my mother because there were sparks flying everywhere only happened so I as an adult could tell him about it. I told my family about him. My friends.

Paula Boock writes in Dare, Truth or Promise, ‘“I’m in love . . .” she said out loud in amazement, because she knew that this was a life-changing thing and life-changing things should be said aloud.’ The compulsion to shout my feelings from the rooftops wasn’t figurative. I quite literally felt it necessary. Everyone should know because nothing more important had ever happened. I’d found my person. A significant other who made my life meaningful. The process of building a relationship is always inventing certain futures, and what lay ahead of us was too magnificent to put into words. Conversations under doonas in the dark and summer days with no shoes on and stopping on the side of the road to look up at the stars and listen to the silence of a cold Friday night.

‘To love someone,’ David Levithan writes in The Lover’s Dictionary, ‘is to live with the fear of who you will become without it.’ I lived in a state of perpetual terror.

That’s why when it happens, it can feel like a nightmare. Because you’ve dreamed it. You’ve developed an obsession about it not happening. The only way to sleep and move moment to moment is to tell yourself it can’t. That tomorrow will be the same as today. If we did not buy into that mythology, at least to an extent, we’d all go mad. The ground is constantly shifting beneath our feet but we like to pretend we’re in control of the lever.

It was a Sunday afternoon and the sun was a little darker in the sky. My weekend had consisted of checking my phone and trying not to check my phone. We had been meant to go on a picnic on Saturday and I’d shaved my legs and washed my hair. But then he’d sent me a strange message asking what I was up to, and I had to try and communicate: I’m currently free by a remarkable coincidence but if you’re not then I’m not but if you are then so am I. He’d said he was going out. I can’t remember where. His message left me uneasy. I felt angry but didn’t say so. I just didn’t reply for a few hours and then asked what plans he had for the rest of the week.

But by Sunday afternoon, it had been twenty-four hours and I hadn’t heard back. At one point, I’d considered calling. I just wanted him to tell me if this was over, so I could feel pure sadness rather than this sadness laced with hope, which is also known as anxiety. I couldn’t sit still. One moment, I would decide things were absolutely fine and I was overreacting and I’d start planning where we’d go for dinner next week. The next moment, a tug in my stomach would tell me that nothing was fine, that he’d changed his mind about me and that I’d never see him again.

And then came the phone call.

The pitch of his voice gave me the answer. He’d seen his ex- girlfriend. They wanted to try things again. I remember he said their relationship ‘deserved’ that after how many years they’d been together. I listened quietly and tried not to cry. The part of me that still wanted him to like me said, ‘I understand’, and I wished him, in a tone that sounded sincere, the best of luck. After I hung up, I cried myself sick.

Listen to this week's episode Mamamia Out Loud. Post continues below.

‘It is forbidden to love where we are not loved,’ Sharon Olds writes in the poem ‘Material Ode’, published in her 2012 book Stag’s Leap. In a single moment, the affection you feel for a person goes from being acceptable to pathetic. You’re holding this enormous slab of concrete with nowhere to put it down. The other person seems to have broken a pact. The lover’s contract. It was implied that neither were allowed to change their minds.

I told my friends what had happened. I felt humiliated, as though I was confessing to them that I wasn’t lovable after all. What I didn’t tell them was what happened a few months later.

Then, on a Friday night, he sent me a message.

It was casual. Maybe asking what I was up to. The high came back immediately. I replied and then he replied and said things had ended – for good this time – with his ex-girlfriend.

The universe owed me this. Two months of suffering had been worth it if it meant we’d end up together, this hiccup a funny little aside in our creation story.

But the messages became disjointed again. A plan was made for Saturday, but then on Saturday he behaved as though that conversation had never happened. He was free the following Friday but then over the course of the week became unfree and maybe that was my fault for not making it clear enough that I’d like to see him on Friday.

Then, finally, a Saturday afternoon came. We were meant to do something just us but then his housemates were throwing a party and I didn’t know if that was an invite or a cancellation. He asked me to come. I wouldn’t know anyone but him. But all I wanted was that feeling again. And I knew that if he just saw me, then all those feelings would come back and this would stop being so complicated.

I wore a red singlet, denim shorts and white Vans. My sister dropped me over to his place in Newtown and when he met me at the door he looked different. Sadder. Distracted.

He brought me out into a courtyard and told half-a-dozen people my name. And then he left me there. I spoke to the guy sitting next to me, trying to make small talk with a stranger. They told stories about people I didn’t know and I laughed when I thought I was meant to. Still, Joshua was gone.

I stood up, pretending I needed the bathroom but really just to see if he was still in the house. He was. Chatting to a friend in the kitchen.

‘I wondered where you were,’ I said, smiling.

I discovered that night that even harder than romantic rejection is spending time with a person who is not interested in you anymore. I also learned that heartbreak makes you do awful things to yourself. For three hours, he didn’t look me in the eye. Didn’t touch me. Didn’t ask me a question. I examined myself in the bathroom mirror wondering if there was something awful smudged on my face. What had I done? How had I failed? Again?

With tightness in my throat, I told him I better go. I don’t think he gave me a kiss on the cheek. He might’ve waved at the door. And as I walked down the street on a Saturday night, hot tears fell from my eyes. He had done it again. How could I have been so stupid?

To this day, when I drive past that street I once trudged down alone, I feel a stab in my chest. A jolt. A kind of romantic trauma.

But I also feel a hint of gratitude.

First, because it doesn’t feel so bad anymore. I am grateful it is not that Saturday afternoon. That the sun has set and risen a number of times since.

And second, because it reminds me of a language I speak. A language I’m well versed in and never want to forget.

The more we allow ourselves to feel romantic rejection and let the grief pass through us, the better use we are to others. The language of heartbreak becomes a gift we are able to pass on from one person to another.

One thing I recognised in Ana, Patrick and Claire - the three people I interviewed for my book Heartsick - was the profound sense of aloneness each of them felt in their grief. It felt for each of them like no-one understood.

And there's some truth in that. I don’t feel the sharpness of pain anymore. I can only imagine it. Since Joshua, I've fallen in love again. The despair feels like a long way away.

But isn’t that just the point? That, as the poet Rainer Maria Rilke put it, ‘no feeling is final’?

The world is full of broken people who have put themselves back together.

Love is magic and heartbreak is the price we pay. If magic can strike once, it can and will strike again.

And the real magic happens when the person on the other end loves you back.

This is an edited extract from Heartsick by Jessie Stephens, published by Pan Macmillan, RRP $34.99, available from today. You can purchase Heartsick from any good bookstore or online. 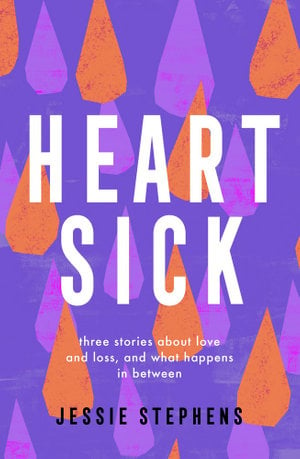