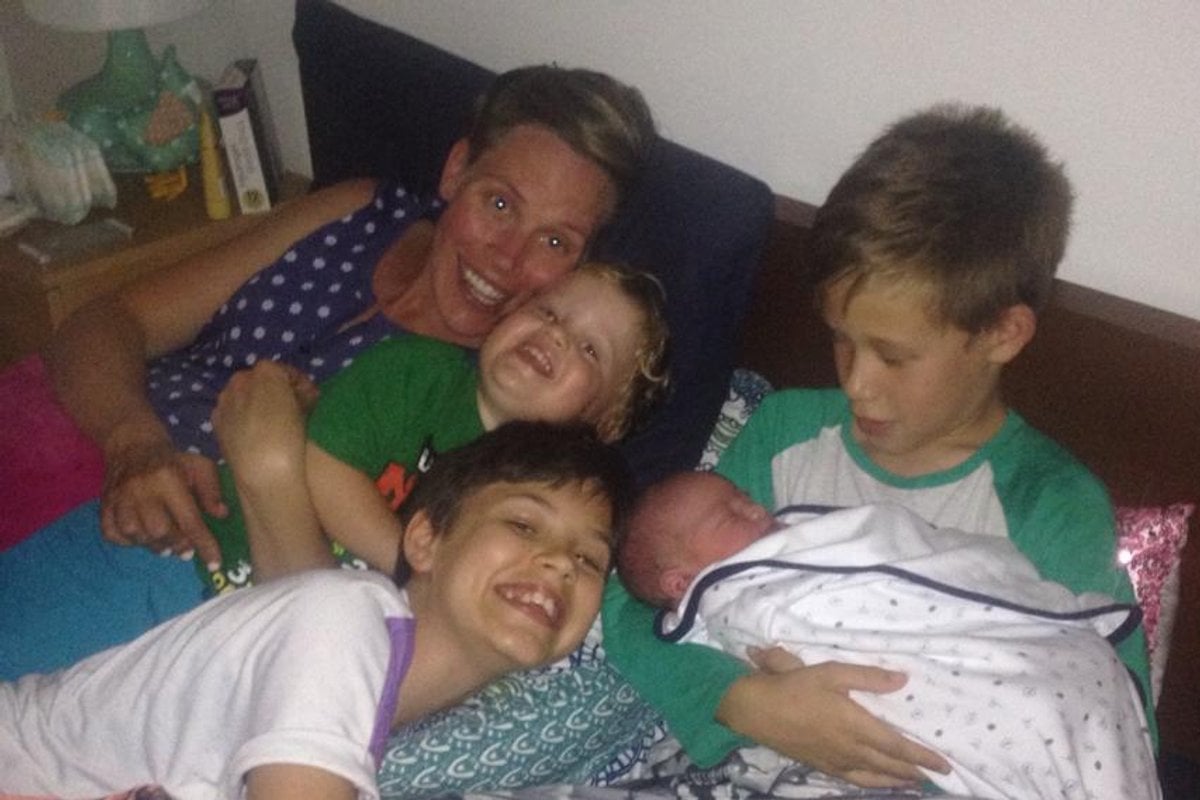 I was 29. Married. With three children and a husband due to have his vasectomy in 14 sleeps.

Not that I was counting or anything.

I was a Lady Start Up. I had purchased my first new car. One that could fit all three offspring in the back snuggly. One that did not give away my ‘breeder’ status.

I was sculling green smoothies. I had abs. Actual abs. I wore crop tops and blushed when people told me how amazing it was that I could have this body after having three kids.

And then I got sick.

At first, I assumed it was because of the burritos we had ingested the night before. I had been gluten free for a while. One does not maintain abs by eating such gooey mess. One has things that are green. And steamed. Or both.

So, I hoped it was a cheese, cream, wheat combination reaction. And not the morning sickness that was completely recognisable to me.

I didn’t have to wait for the two blue lines when I peed on the stick. They appeared before I had even wiped.

Still, I remained in my precarious puddle of denial and convinced myself, and my husband that it was a false positive. I’d do another one in the morning. Again, with the two blue lines. I sent him out for a different brand of test. And the lines kept coming, in pairs, that where blue.

I was up the stick. Morning sick. And I did not want to be.

Cue the conversations. My husband fully supported either me. “Whatever you want to do babe.” So I talked to my bestie.

A continent away, I voice messaged her. I listed all the reasons I shouldn’t keep the fetus. My new studio. My new car. My abs. She replied immediately. She agreed. Get rid of it. And then I knew I couldn’t.

I had to keep it. I was in a stable relationship, with a roof over my head and food in the fridge. I couldn't terminate this pregnancy.

And so, with my husband’s either way support, my head in a bucket, and a heavy sigh, I decided to keep the baby.

First I lost my abs. I gained 28 kilos. I dove headfirst into the ice-cream. It’s the easiest thing to vomit.

I had hyperemesis. Princess Kate wasn’t around then. People thought it was my inability to handle the morning sickness. But I tore the cartilage between my ribs.

Then I lost my studio. I couldn’t juggle the three humans, the Lady Start Up and the hyperemesis.

I was an ice-cream recycling, iron deficient, tired to my bones human with a displaced pelvis and I have no fecks to give. So I closed it.

And then I lost my car. Or rather, I gained a van. A huge van. A van that does not fit in most parking bays but does fit four humans. And a driver. Me.

The baby was born, quickly.

With three kids in the car, I asked my husband to turn up the music so I could scream through the contractions without scaring the kids.

40 minutes after we arrived at the hospital he was in my arms. Crying. He slept the whole day. And he woke up screeching every hour that night.

Something that he would continue to do for the next 18 months. I cried with him. But then I stopped. I didn’t even have the energy for tears. I was postnatally depressed.

I didn’t realise I was until I tried to drive the van into a tree but stopped because one of my other kids told me from the back seat that he was thirsty.

I thought I should probably wait until their dad gets home. And then I thought, I should tell someone. Like a doctor. And I did. I got help.

My life changed with those blue lines.

It’s been hard. And I don’t think I’m allowed to say that. I think I am supposed to say things like “I love my baby so much, and I wouldn’t have it any other way”.

Except, maybe I would.

Maybe I am a monster.

Reply
Upvote
Great post. Thank you for writing this. My husband and I discuss this a lot. We have just had our third. He quickly got the snip straight after. lol. We are not monsters for wanting our abs, and our business, and our nice car. We are not monsters for wanting our own lives. I often say, My children are not my life, they are apart of my life. And I make a conscious effort never to justify my love for my family before having a whinge about them. It goes without saying. Power to you. T x

Reply
Upvote
Not a monster at all. As for losing the abs, the car and the start up, it’s ok to be upset and angry. They are things you worked hard for and were meaningful to you. But you can have them again. It will take hard work (especially the abs), but it will happen. And if it doesn’t, that’s ok too. You can have different things and different goals. It’s hard to see through the miserable fog, but you WILL be ok. It WILL work out. It’s won’t be easy, but you will make it. And HUGE congratulations on getting help. That’s the best and hardest part. Xxxxxxxx
News
General
Opinion
True Crime
Politics
Sport
Explainer
Entertainment
Celebrity
Reality TV
Movies
TV
Books
Rogue
Royal
Lifestyle
Beauty
Fashion
Weddings
Home
Wellness
Health
Fitness
Travel
Food
Parents
Before The Bump
Pregnancy
Baby
Kids
Teens
School
Parent Opinion
Work & Money
Money
Finance
Career
Lady Startup
Relationships
Sex
Dating
Separation
Friendship
Family
Real Life
Couples