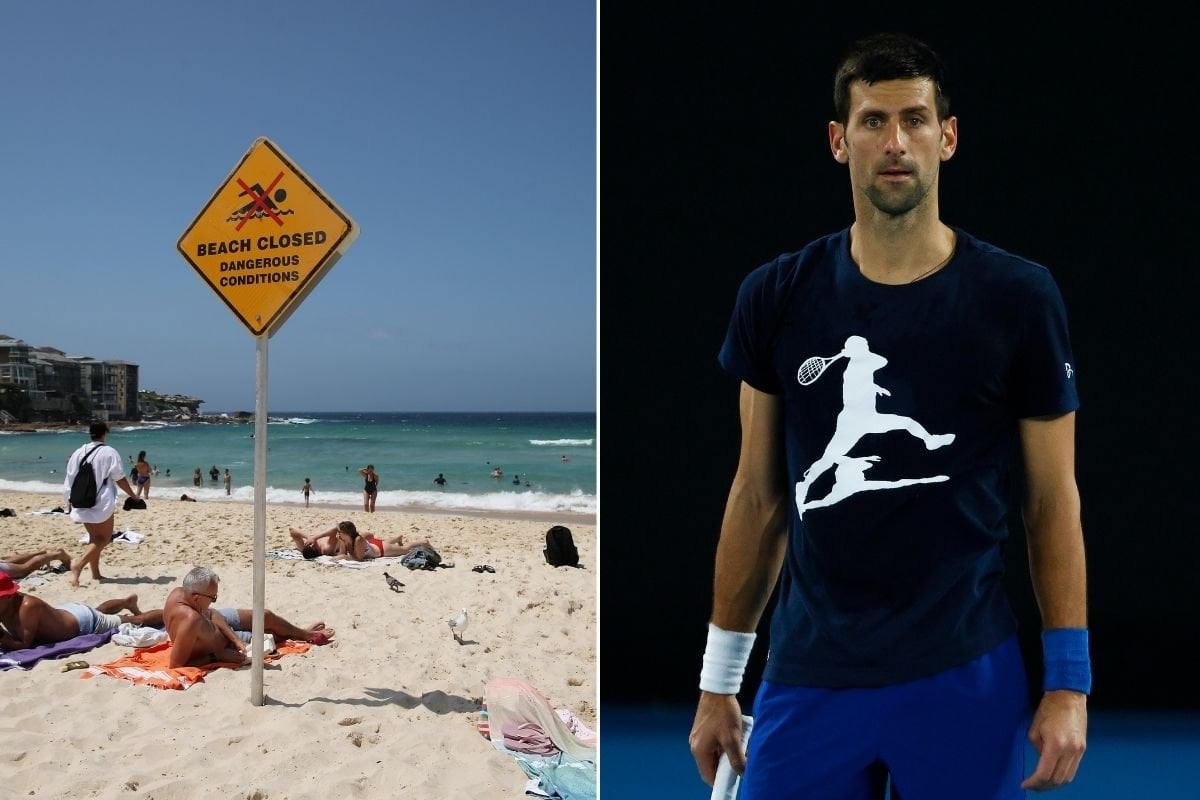 Novak Djokovic was spotted at Melbourne Airport on Sunday night after the Federal Court unanimously ruled to dismiss his application to have his visa cancellation overturned.

Immigration Minister Alex Hawke stripped Djokovic of his visa, claiming the tennis star's stance against COVID-19 vaccination had the potential to excite anti-vax sentiment and therefore create a risk to public health.

"Australia's strong border protection policies have kept us safe during the pandemic," Mr Hawke said in a statement after the court decision.

"Strong border protection policies are also fundamental to safe-guarding Australia's social cohesion which continues to strengthen despite the pandemic."

Novak Djokovic leaves the Marhaba lounge at Melbourne Airport for flight back to Europe. pic.twitter.com/Rg2D1XTTwW

Djokovic, who must pay the government's legal costs, said he is "extremely disappointed" but respected the court's ruling.

"I will cooperate with the relevant authorities in relation to my departure from the country," he said in a statement.

"I would like to thank my family, friends, team, supporters, fans and my fellow Serbians for your continued support. You have all been a great source of strength."

Prime Minister Scott Morrison said the cancellation of Djokovic's visa was in the public interest.

"Strong borders are fundamental to the Australian way of life as is the rule of law."

But Labor immigration spokeswoman Kristina Keneally said Djokovic should not have been granted a visa to travel to Australia in the first place.

READ: 'For a fatigued, disappointed nation, the Djokovic debacle was the final straw.'

Tsunami-hit Tonga remains largely uncontactable with telephone and internet links severed, leaving relatives in faraway New Zealand praying for their families on the Pacific islands as casualty reports had yet to come through.

An underwater volcano off Tonga erupted on Saturday, triggering warnings of 1.2-metre tsunami waves and evacuation orders on the shores of Tonga as well as several South Pacific islands, where footage on social media showed waves crashing into coastal homes.

Internet and phone lines went down at about 6.40pm local time on Saturday, leaving the 105,000 residents on the islands virtually uncontactable.

More chilling images out of #Tonga, as the country reels from the intense Volcanic eruption today 🌋

Electricity & Telecommunications lines are currently down, with the entire South Pacific Kingdom effectively ‘offline’ from the rest of the 🌍 at present

There are no official reports of injuries or deaths in Tonga as yet, although communications are limited and contact has not been established with outlying coastal areas beyond the capital Nuku'alofa and closer to the volcano, New Zealand Prime Minister Jacinda Ardern told a news conference on Sunday.

Australia is sending a surveillance flight this morning, with the P-8 plane set to reach Tongan airspace at 9am Monday to gather information on critical infrastructure such as roads, ports and power lines. We're also organising humanitarian assistance through a flight from Brisbane which will remain on standby.

The eight-minute eruption on Saturday triggered tsunami warnings and evacuations in several countries. The eruption caused flooding across portions of coastal Alaska and California in the United States. Two people have died in unusually high waves off the coast of Peru.

72 per cent believe rapid antigen tests should be free.

Almost three-quarters of Australians say rapid antigen tests should be free, while more than half believe governments have failed to adequately plan over the past two years to deal with challenges that have been throw up by Omicron.

A survey by the Australian Institute found 72 per cent of respondents believe the federal government should provide rapid tests free to everyone, including two-thirds of coalition voters.

Just 16 per cent believe retailers should continue to sell them to individuals.

"There's no debate amongst economists. RATs should be free."

"Rather than wanting government out of their lives, it is clear that most Australians believe the government has a responsibility to provide rapid antigen tests free to the public," the institute's deputy director Ebony Bennett said.

"Australians have tried to do the right thing, but the Morrison government's failure to secure adequate supplies of affordable rapid antigen tests left many Australians in desperate situations over the summer."

The survey of 1000 Australians taken last week also found 53 per cent of respondents believe governments failed to plan adequately over the past two years to avoid the current problems of pressure on the public health system, supply chain issues and staffing shortages.

NSW announced another 34,660 new COVID-19 cases on Sunday along with a further 20 virus-related deaths.

The death toll also rose in the ACT, where there were two fatalities alongside 1316 new cases.

Tasmania has 825 new cases and the Northern Territory 327. Alice Springs will also enforce a seven-day 'lockout' of anyone not yet double-dosed.

Police divers have joined a large-scale search for a nine-year-old girl who has been missing in the NSW Blue Mountains since Thursday.

The girl was last seen at a property at Mt Wilson, 60km northwest of Richmond where she is believed to have been holidaying with her family from Queensland.

Her absence was first reported to police on Friday morning.

Police said on Sunday they had expanded their search which involves more than 100 personnel including the police rescue and dog units as well as PolAir, the SES, Rural Fire Service and ambulance officers.

"As part of ongoing inquiries into the missing girl at Mt Wilson, officers including police divers are also searching the Hawkesbury River at Windsor," a police statement said.

"Conditions in the mountains were quite mild last night … temperatures are very survivable outside in the environment," he said.

Lawyers for Prince Andrew and Virginia Giuffre have filed their initial requests for witnesses in her lawsuit accusing the royal of sexually abusing her at age 17.

Recently released documents show that the prince's legal team is seeking witness accounts from her husband Robert Giuffre and her psychologist Judith Lightfoot as part of the civil case filed in the US.

Both Robert Giuffre and Lightfoot are residents of Australia and would be requested to be examined under oath, either in person or by video-link.

Prince Andrew's military links and royal patronages have been removed by the royal family and he will no longer be known as "His Royal Highness". https://t.co/mNSusnI7bi

Giuffre's lawyers, meanwhile, are seeking witness accounts from the prince's former assistant and a woman who claims to have seen him at a London nightclub with her during the time in question.

The lawsuit cleared a hurdle after a judge earlier this week refused Andrew's request to have it dismissed.

Charlotte Proudman, a barrister and Cambridge academic specialising in violence against women told The Australian, "It’s the ultimate in victim blaming. A lot of victims of abuse understandably reach out for therapeutic support. (Andrew’s lawyers) are trying to discredit her."

The trial is scheduled to take place between September and December.

- with reporting from PA

- The gunman who took four people hostage at a Texas synagogue in what US President Joe Biden has called "an act of terror" has been identified as British citizen Malik Faisal Akram.

The 44-year-old was killed after the hours long siege.

- France's parliament has approved a law that will exclude unvaccinated people from all restaurants, sports arenas and other venues.

- Prince Harry says he feels he is "unable" to travel to the United Kingdom with his family without police protection, as he seeks a judicial review over a government decision that he cover the cost himself.

Reply
Upvote
3 upvotes
So 47% of Australians believe the government was adequately prepared for Omicron? Whether you vote Liberal, Labor or another party entirely, I don't know how anyone could possibly think this. There must be an awful lot of people walking around with their eyes shut and their ears plugged.
G
gypsy 4 months ago

Reply
Upvote
1 upvotes
@fightofyourlife   You are exactly right. Trouble is its in the DNA of Liberal voters to no matter what continue to support idiots. Look at how they carried on with the exit of NSW premier. Watching her twist facts was cringeworthy yet they were willing to ignore it. The mistakes Morrison has made with eg jobjeeper far outweigh Rudd’s stimulus errors with school building projects, that the tradies abused. At least the school still got the building I would like to know how the public gained out of Harvey Norman gaining a nice little 33 million. Morrison banged on for a decade about 2009 stimulus, it was way better organised than this one. People are more forgiving of Liberal governments. Crazy, they can’t see through them, they care about one thing $$$$$.
S
sarat023 4 months ago