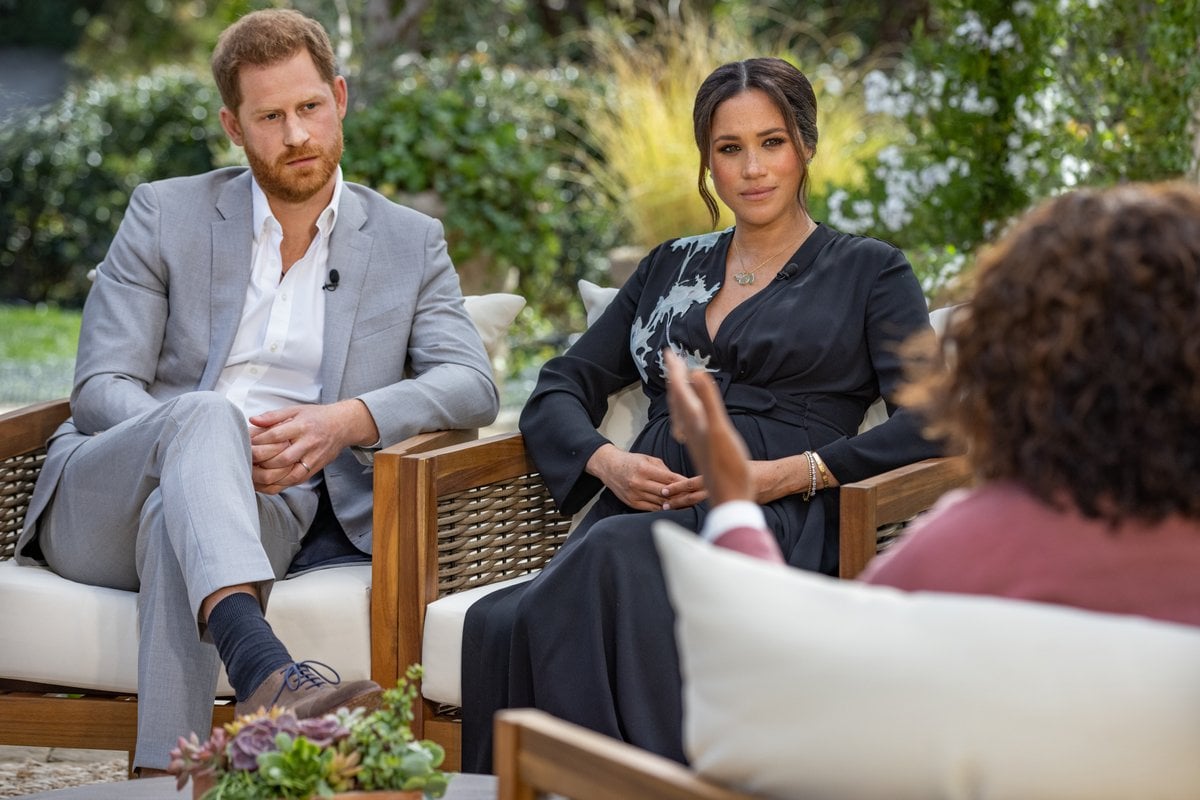 This weekend, Prince Harry and Meghan Markle's much-anticipated interview with Oprah Winfrey will air in the United States. And in the coming days, it will appear on Australian television screens too.

So, before we watch it for ourselves, here's everything we know about Prince Harry and Meghan Markle's tell-all interview with Oprah Winfrey.

Watch the trailer for Oprah's interview with Prince Harry and Meghan Markle below. Post continues after video.

What can we expect from the interview?

Over the past week, CBS have shared multiple clips from the couple's interview, giving us a glimpse into what we can expect from the two-hour interview.

In the first teaser for the interview, Prince Harry shared how happy he is to have Meghan by his side. Because when his mum, Princess Diana, spoke up, she had no one.

"You know, for me, I’m just really relieved and happy to be sitting here talking to you with my wife by my side because I can’t begin to imagine what it must have been like for [Princess Diana] going through this process by herself all those years ago," he said.

"Because it has been unbelievably tough for the two of us, but at least we had each other," he added.

"How do you feel about the palace hearing you speak your truth today?" Oprah asked Meghan.

"I don’t know how they could expect that after all of this time we would still just be silent when there is an active role that the firm is playing in perpetuating falsehoods about us," she responded.

"And if that comes with risk of losing things... there’s a lot that’s been lost already."

In the most recent trailer, released on Saturday, Oprah explained that she'd asked for this interview a few years prior, but Meghan declined.

"So, I just want to say that I called you, either February or March 2018, before the wedding asking, 'Would you please give me an interview?' And you said, 'I’m sorry, it’s not the right time,'" Oprah said.

They also discussed what's changed since their first conversation.

"Umm... well, so many things," Meghan said after a long pause.

#EXCLUSIVE: In this extended first clip from @Oprah's interview with Prince Harry and Meghan, The Duchess of Sussex says what it means to be able to speak for herself.

It comes one year after the couple left England and stepped back from full-time royal life.#OprahMeghanHarry pic.twitter.com/o3AdxpmLrh

How has the royal family responded?

On Wednesday, around the same time that CBS dropped the teaser clips, Buckingham Palace announced that they would be launching an investigation into allegations that the Duchess of Sussex bullied staff during her tenure as a working royal.

Earlier in the week, British newspaper The Times ran an exclusive article in which royal aides claimed that Meghan had faced a bullying complaint in 2018. But it was only last week that the news became public.

How has the world responded?

In response to these claims, Meghan's former Suits co-star Patrick J. Adams has spoken up in her defence.

"Meghan Markle and I spent the better part of a decade working together on Suits," he wrote on Twitter.

"From day one she was an enthusiastic, kind, cooperative, giving, joyful and supporting member of our television family. She remained that person and colleague as fame, prestige and power accrued," he continued.

Meghan Markle and I spent the better part of a decade working together on Suits. From day one she was an enthusiastic, kind, cooperative, giving, joyful and supportive member of our television family. She remained that person and colleague as fame, prestige and power accrued.

"She has always been a powerful woman with a deep sense of morality and a fierce work ethic and has never been afraid to speak up, be heard and defend herself and those she holds dear.

"Like the rest of the world, I have watched her navigate the last few years in astonishment. She fell in love, moved to a new country, became a household name across the entire globe and began the difficult work of trying to find her place in a family dynamic that can at best be described as complicated and at worst, seemingly archaic and toxic.

"It sickened me to read the endless racist, slanderous, clickbaiting vitriol spewed in her direction from all manner of media across the UK and the world but I also knew that Meghan was stronger than people realised or understood and they would regret underestimating her. And then they welcomed Archie. And on any sort of decent planet that would be a time to stop sharpening the knives and let these two people enjoy the magical early months and years of starting a family. But we don’t live on that planet and instead the hunt continued." 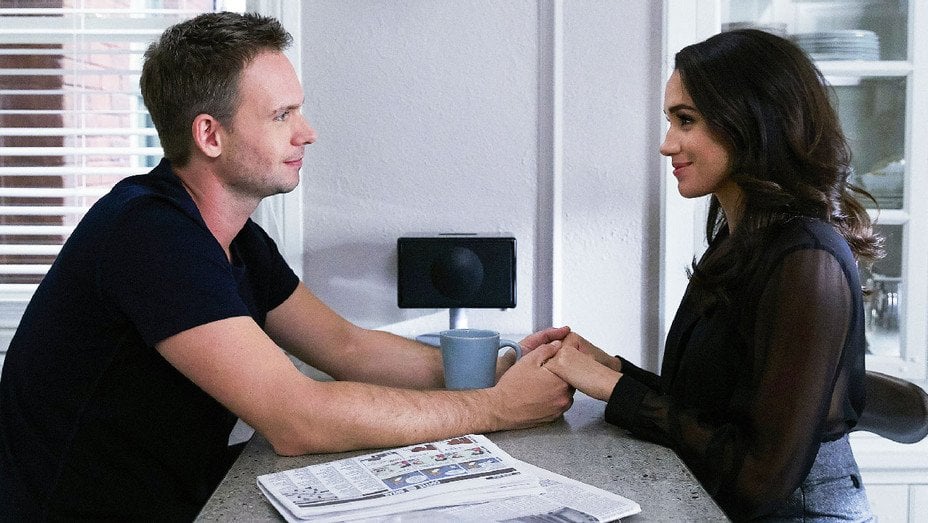 "It’s OBSCENE that the royal family, whose newest member is currently GROWING INSIDE OF HER, is promoting and amplifying accusations of 'bullying' against a woman who herself was basically forced to flee the UK in order to protect her family and her own mental health," he wrote.

"In my opinion, this newest chapter and its timing is just another stunning example of the shamelessness of an institution that has outlived its relevance, is way overdrawn on credibility and apparently bankrupt of decency," he added.

"Find someone else to admonish, berate and torment. My friend Meghan is way out of your league."

How can I watch it in Australia?

Oprah with Meghan And Harry will air in the United States on Sunday, March 7.

So get your popcorn ready, this is going to be a good one.

Reply
Upvote
They are very divisive for a couple of self-described humanitarians. I don’t see how this behaviour is helping their brand.
“At Archewell, we unleash the power of compassion to drive systemic cultural change”.
I think they’ve gotten rather confused about the meaning of ‘compassion’.
“At Archewell, we unleash the power of revenge to drive systemic cultural change”.
There! Now it fits! M&H are hell bent on tearing down the cultural institution of a nation just because she didn’t want to follow the organisation’s media policy.
G
guest2 a year ago

Reply
Upvote
1 upvotes
@chrissyinthemiddle I would have thought that Meghan would have wanted to simply sit back and enjoy her second pregnancy, free from stress.  Instead, she and Harry appear to be launching a frontal assault on the Royal Family.   There is a reason the Firm has been kicking around for over a 1,000 years.
A
anita.464 a year ago

Reply
Upvote
1 upvotes
@chrissyinthemiddle 'systematic cultural change', of what?, the royal family?  And the media policy being... what exactly?   The spill discussed the origins of the hatred recently and it certainly doesn't stem from a place of malice on M or H's part.    I think this is two people forced into an impossible situation by a toxic workplace and a ridic tabloid media.
G
guest2 a year ago

Reply
Upvote
2 upvotes
@anita.464  As more stories are leak out from Buckingham Palace,  it is very much starting to look as if there are two sides to the story of a toxic workplace. Harry and Meghan have managed to create this current situation  themselves with the Oprah interview.  blind Freddy could see that Oprah is not being paid millions of dollars  for an interview where Meghan pontificates about her social justice causes.   You can dismiss the tabloid media as ridiculous, but that media is needed for all members of the Royal Family to promote their charitable causes and to raise funds.
C
chrissyinthemiddle a year ago

Reply
Upvote
1 upvotes
@anita.464 There is no denying that the tabloid media can be brutal. But we aren’t talking about the tabloid media here. We are talking about the behaviour of 2 people who until recently wanted a hybrid role as part-time working members of the royal family. It wasn’t too toxic then was it?
What is happening now is that it’s looking very much like M&H are using powerful friends in the media to launch attacks on the institution of the royal family (and his family). Not everyone is going to like that. Only time will tell if it was a good PR strategy to do this highly publicised interview. They have freely chosen this and its associated media circus. To some it’s unedifying and embarrassing, but each to their own.
News
General
Opinion
True Crime
Politics
Sport
Explainer
Entertainment
Celebrity
Reality TV
Movies
TV
Books
Rogue
Royal
Lifestyle
Beauty
Fashion
Weddings
Home
Wellness
Health
Fitness
Travel
Food
Parents
Before The Bump
Pregnancy
Baby
Kids
Teens
School
Parent Opinion
Work & Money
Money
Finance
Career
Lady Startup
Relationships
Sex
Dating
Separation
Friendship
Family
Real Life
Couples