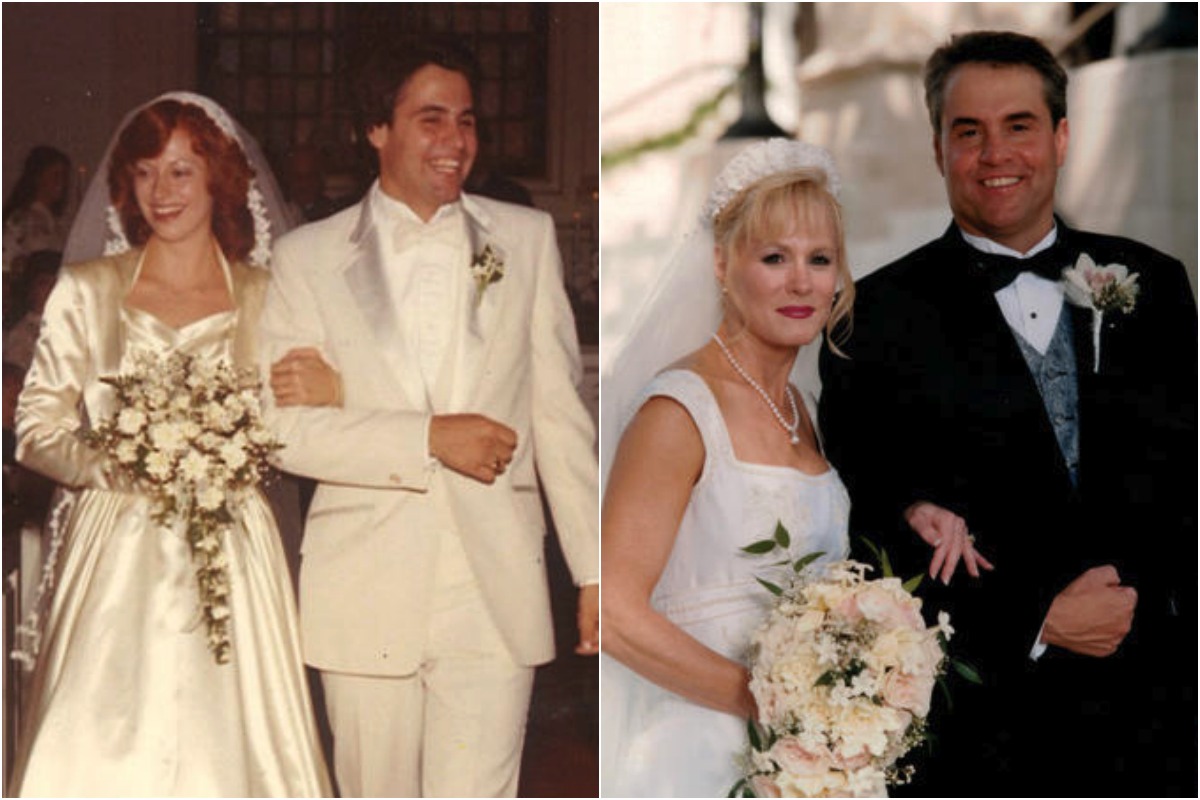 On May 6, 1995, Harold Henthorn and his wife Sandra "Lynn" Henthorn were driving in the dark through the Colorado countryside when one of the car tyres began to feel "spongy".

They pulled over to check it out.

According to Harold Henthorn, Lynn crawled underneath the car to retrieve a lug nut, when the Jeep slipped off the jack, crushing her.

She was flown to hospital but died during surgery. An investigation into her death closed six days later.

Her death was deemed a tragic accident and Henthorn collected nearly AUD$688,000 from her life insurance, telling loved ones "my bride is gone," as he mourned her death. 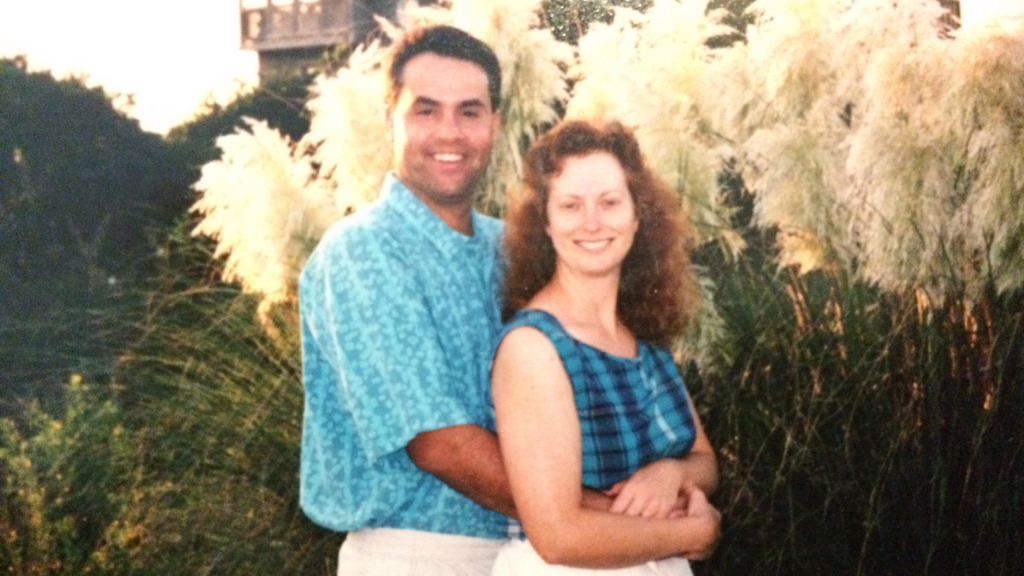 She was a prominent and wealthy eye doctor and surgeon from Jackson, Mississippi, and pretty soon the couple fell in love. They got married a year later and went on to have a daughter, Haley, in 2005.

"He had his daughter. He had his wife...he had his nice life. He seemed like a good husband. It seemed like he provided...He's a very good father," a longtime family friend of Henthorn told CBS 48 Hours. 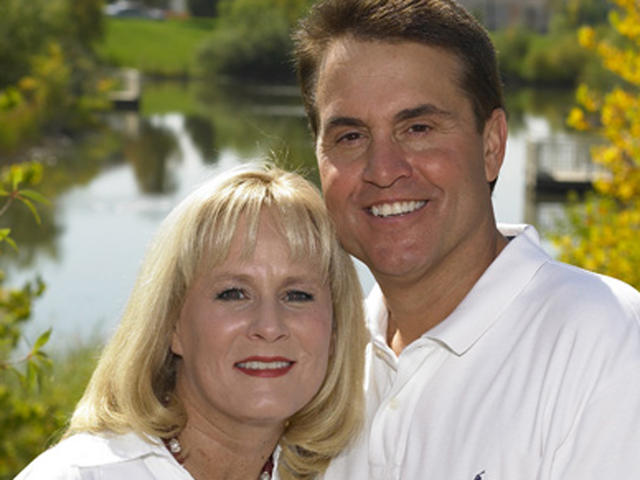 But Toni's loved ones painted a less rosy picture, telling the broadcaster he had become gradually more demanding and controlling as the years went on.

"He made us uncomfortable. He was kind of... there was something creepy about him," Toni's office manager Tammi Abbruscato told CBS. "She was not able to schedule anything outside of her normal schedule without first consulting with Harold."

In September 2012, Henthorn took Toni on a surprise12th wedding anniversary trip to the Rocky Mountain National Park. He'd asked her work colleagues to help him organise it and there was a big deal made out of filming her reaction to the plan.

It was the last time anyone saw her alive. 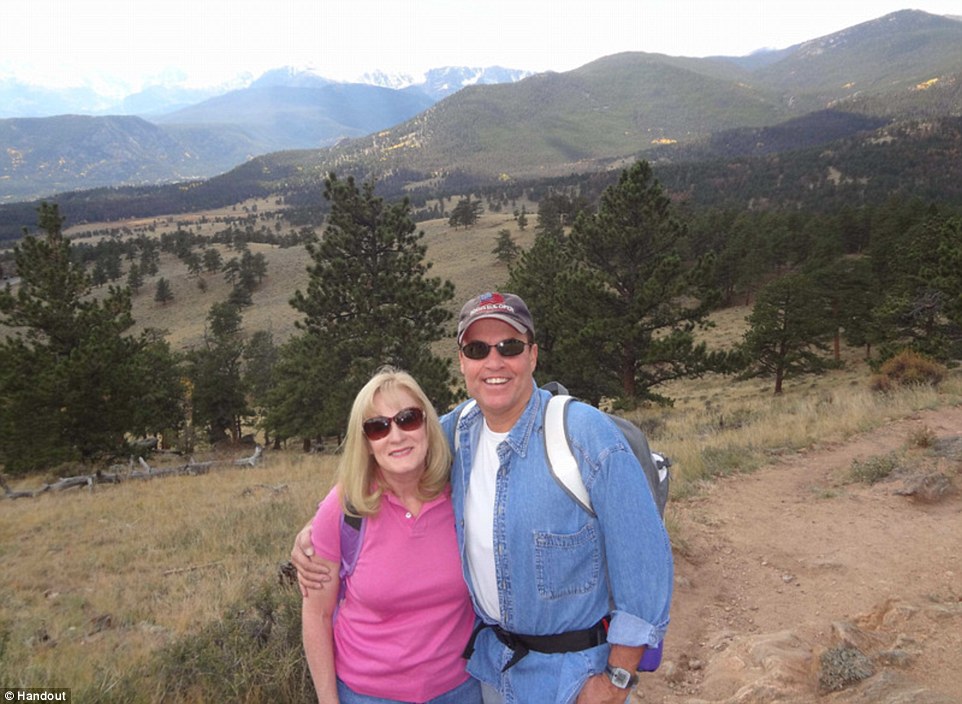 This is one of the last photos taken of Toni on their hiking trip. Image: Daily Mail/Handout.

On September 29, a message came through to Toni's brother, Barry Bertolet's phone.

"Barry... urgent... Toni is injured... in Estes Park....fall from rock. Critical...requested flight for life. Rangers on way," it read.

Toni had fallen nearly 42 metres from a cliff while the couple was hiking.

Henthorn told police they'd been taking photos of each other when she fell backwards.﻿ 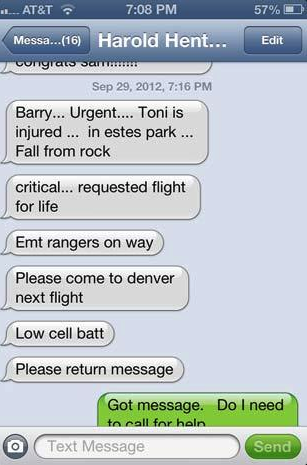 He called 911 and administered CPR, but his wife died from her injuries. Henthorn was the only witness.

Once again, Henthorn was to benefit financially from his wife's death, with her own family shocked to discover there were three life insurance policies to her name, totalling AUD$6.2 million.

The coincidence didn't go unnoticed and rumours started to circulate, culminating in 16 anonymous tips to the coroner's officer about Henthorn's first wife's tragic death, all of them expressing concern that Toni’s death wasn’t the accident the local papers and TV stations were reporting.

Investigators looked carefully for any inconsistencies in Henthorn's story.

Toni's AUD$41,000 wedding ring was missing from her hand, despite a park ranger noticing it on her when she died. Her lipstick was intact, despite Henthorn telling authorities he administered CPR. On a map owned by Henthorn an 'X' marked the spot where his wife fell, a detail he couldn't explain, and there were no photos from when Toni fell on the camera he said she was using.

His story also changed multiple times, and prosecutors found text messages he'd sent describing his wife as injured, even after he knew she was dead. He'd also told Toni's brother three slightly different versions of events from the day in question. 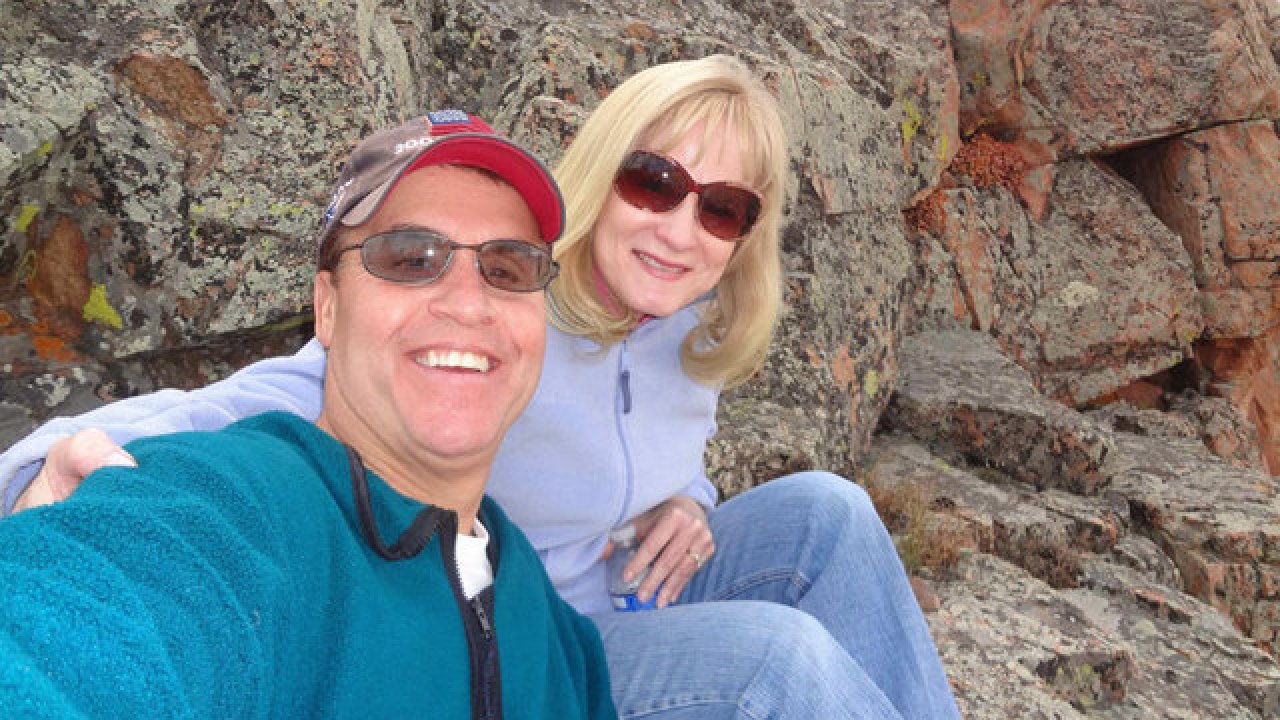 Harold Henthorn maintains that his wife Toni fell from a cliff after slipping. Image: Denver7 News.

"The story is that... he notices that she was lagging behind," Barry Bertolet told 48 Hours.

"And he can't find her. So he starts looking over edges. And then he sees that she's down at the bottom. And then he tells me then that he got a text message... and so he has his head down looking at the phone text and sees there's...like a little flash. And then Toni's not there," he said.

"That story changes by the next day. Toni now is taking a picture of Harold," he explained. "And Toni has, presumably, while setting up a shot of him, fallen backwards off of a cliff. And so here are three stories ... in basically less than 48 hours."

As investigators continued to dig, more information started to come out.

It was discovered that Henthorn had been lying about being a 'successful businessman and entrepreneur' for 20 years and had in fact not held a job since 1992. Instead, he'd been living off the money he received from his first wife's life insurance.

Toni's family also told authorities of another incident that they believed was Henthorn's first attempt at killing his wife.

In 2011, Henthorn was allegedly completing some construction work or cleaning up the deck of the couple's holiday cabin in Colorado when a beam struck Toni in the upper back, seriously injuring her neck.

His story from that evening had changed slightly when retold to the paramedics, ER doctor and later a friend.

LISTEN: The murder of Tara Costigan. Post continues after podcast.

It was also uncovered, that Henthorn took out a AUD$550,000 life insurance policy on his former sister-in-law, Grace Rishell in 2009, who he had remained close to after Lynn's death. He had forged her signature and put himself as the beneficiary.

The month before Toni's death, Henthorn had visited Grace and her children for a day out speedboat riding. He emailed her after Toni's death and said "my bride is gone," mirroring the phrase he'd used after his first wife's passing. Grace believes she would have been his third victim.

On November 6, 2014, two years after Toni's fatal fall, Henthorn, then 59, was arrested and charged with first-degree murder.

The same year, a coroner who had been looking into Lynn's death changed the official documents from "accident" to "undetermined" after the Douglas County Sheriff’s Office discovered an apparent footprint on the front fender of the car, suggesting it may have been kicked, as was reported by the Washington Post.

Lynn's brother told CBS4  he believed the death certificate change was "symbolic of the direction we think everyone is working toward in these proceedings."

Henthorn's trial in 2015 lasted two weeks and it took the jury 10 hours of deliberation to unanimously find him guilty.

He was sentenced in the December of that year to a mandatory life sentence with no possibility of parole, with his then 10-year-old daughter telling the court she'd no longer refer to Henthorn as her father, but only as "Mr Henthorn" and that she was "afraid she would grow up to be like her father."

She now lives with Toni's brother Barry and his wife Paula.

According to The Denver Channel, Henthorn told the court: "Toni was a remarkable woman and I loved her with all my heart. I did not kill Toni or anyone." 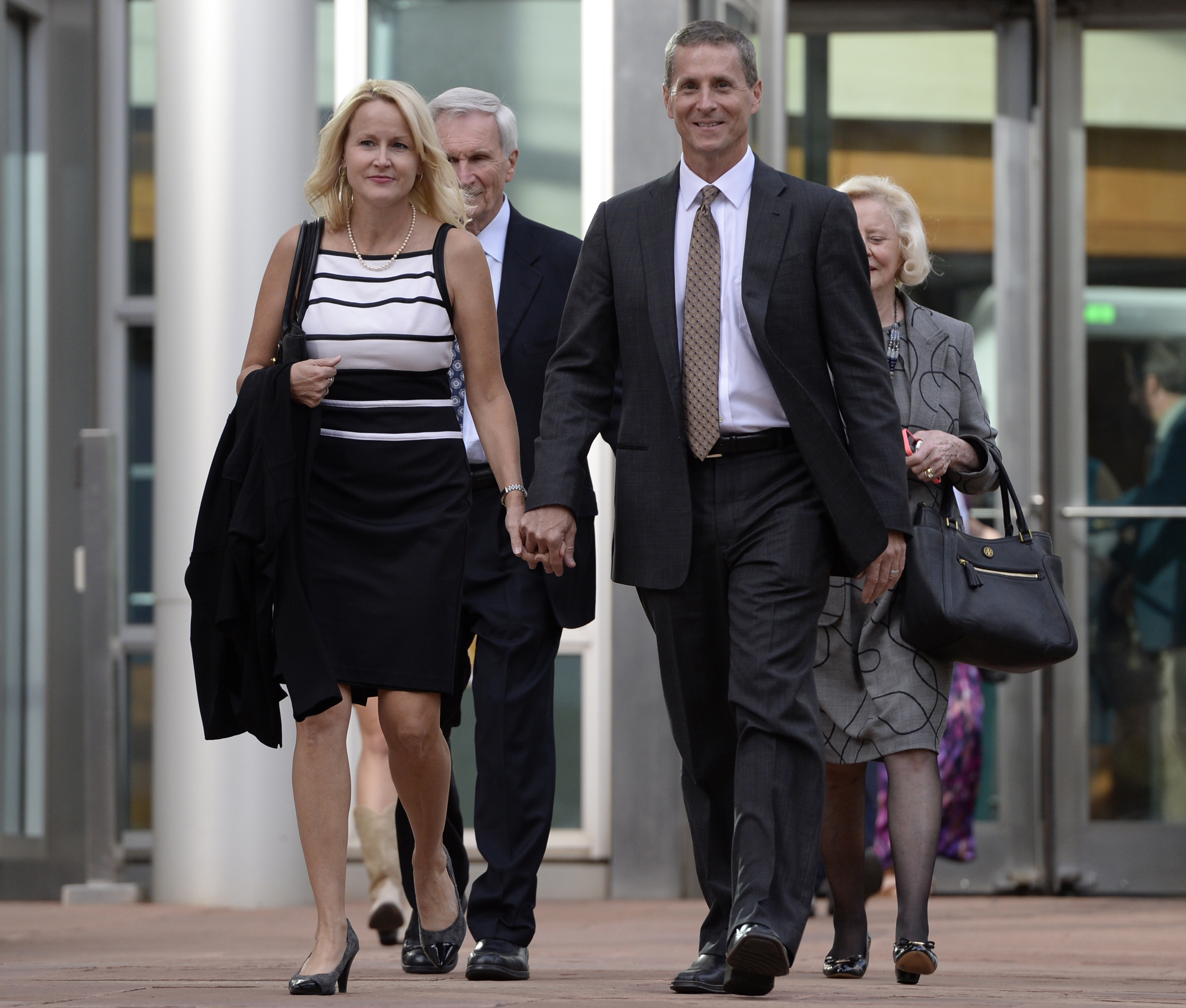 ﻿"Today’s conviction means that Harold Henthorn will never hurt or kill another woman,” assistant US attorney Bob Troyer said after the trial, according to CNN. "Instead, he will likely spend the rest of his natural life in a prison cell."

﻿﻿As he was escorted from the room, Toni's family members shouted "Bye, Harold!" as the court erupted in applause.

Criminal charges are yet to be laid over the death of Sandra Lynn Rishell.