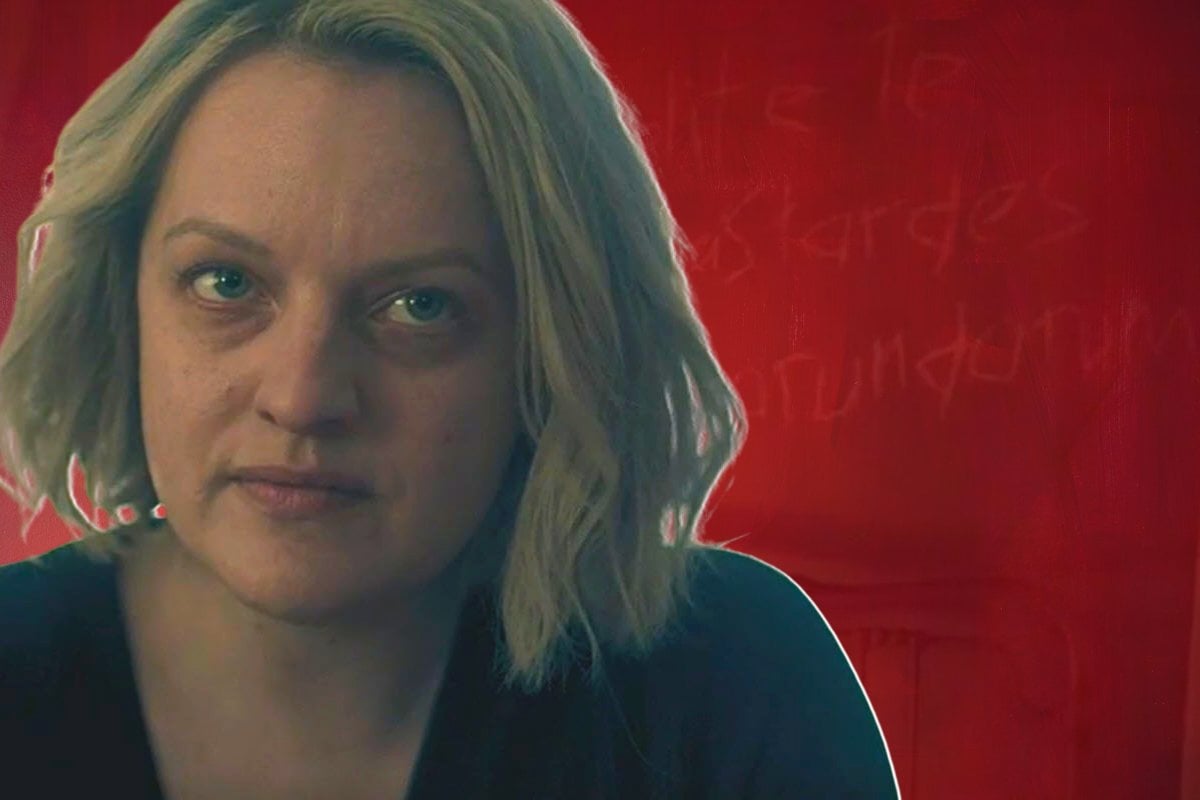 Spoiler alert: This article contains spoilers for all of The Handmaid's Tale season 4. The biggest spoiler is literally two lines below this sentence! Be careful - and don't say I didn't warn you!

It's only been days since that Handmaid's Tale season four finale death - Fred's finger could still be fresh enough for a transplant ¯\_(ツ)_/¯ - but how are we expected to get any damn rest when WE HAVE SO MANY QUESTIONS?

After years of literal torture, June finally got retribution against the man she hated most.

But in true Handmaid's style, Fred's death guarantees only one thing: more bloody complications. June reckons she has to flee - to where, we don't know. Gilead's probably not going to miss him, but the nature of his death will piss off the non-treasonous members of the Commanders Council. Plus, rumour has it Serena is still sitting in front of a Zoom screen, waiting.

All while sweet angel Janine and child-bride-turned-child-handmaid Esther are hanging out at the Red Centre with cattle prod-wielding Aunt Lydia.

The good news is that The Handmaid's Tale was renewed for season 5 way back in December 2020, before we'd even seen a second of season 4, so we are guaranteed answers.

When? That's still unconfirmed. Season four meant a departure from the show's usual annual release pattern because of that pesky global pandemic, but as things slowly return to normal we can hope it'll be out in autumn 2022 (spring in the Northern Hemisphere).

In the meantime, let's ponder what could happen. Here are a bunch of questions season five simply must answer, please, with maybe a theory or two thrown in for fun...

1. How will Gilead react to Fred's murder?

If June had left Fred's body to waste away in no-man's-land, we'd probably not be worrying about this. But June's not exactly known for her subtlety.

Instead, Fred's body hangs on a wall - representative of The Wall - above a message: nolite te bastardes carborundorum.

The “Nolite te bastardes carborundorum” under Fred was such a great touch #HandmaidsTale pic.twitter.com/81QJ5JzkD9

It's bastardised Latin, a joke phrase used by Fred since he was a kid studying Latin. Loosely translated as 'don't let the bastards grind you down'. It's also the phrase the Waterfords former Handmaid carved into the wall of her room before dying by suicide.

So, yeah. They're going to realise this is a targeted attack, by someone who 1) knows that phrase and 2) hates Fred.

June's humiliated all of Gilead, and they're not going to roll over and take that.

Where is June going?

Showrunner and writer Bruce Miller hinted at where we could find June in season five, after she left Luke's house at the end of season four.

"I very much want it to be her choice, not consequences. Because once it's consequences, it's just her dealing with those consequences," showrunner and writer Bruce Miller told Variety. "And of course, there will be that [down the line], but right now, there's no crime. Nobody has any idea what happened. Fred's gone; he was traded."

Which sounds like we're going to pick up with June in self-appointed exile, before any murder is discovered. But she has to be found out pretty soon after: she made a statement with his body, plus... the finger.

So, does she intend to go on the run? Will she swing by Tuello's house again and hand herself in? Was the revenge worth having to tear herself from one of her children yet again? What exactly is the legal ramifications for crimes committed in apparent no-man's-land?

We also can't help thinking... one Waterford down, one to go. Right? I doubt we'll see another vigilante murder, but June is definitely not going to let Serena go off and live with her baby in peace.

2. What is Serena's next move?

That house Serena was demanding from Tuello seems very far away now, doesn't it?

She has a few other problems:

Like Gilead, Serena feels her best when she's powerful. It's probably why her allegiances switch so bloody often: she'll do whatever is going to make her feel the most important at the time. 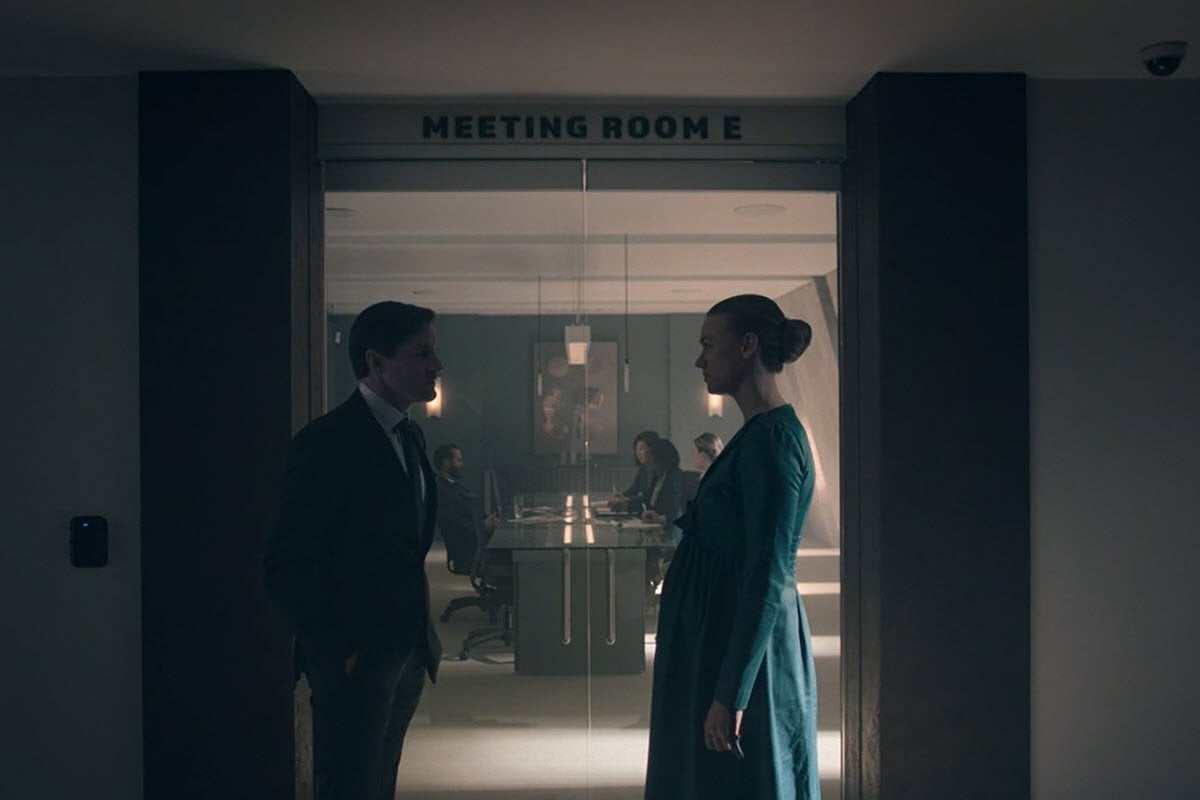 Also, if Tuello's still into her after this I will riot. Image: SBS.

Showrunner Bruce Miller reckons Serena is the one to worry about, which... does not bode well:

"Because Serena, although she has mixed feelings about Fred… she also does not like to lose," he told Entertainment Weekly.

"It's gonna be very interesting to see how she decides to come back."

The Waterfords have accumulated some fans recently, and Fred's death could very well turn him from Fred the Redeemer to Fred the Martyr. As his widow, that would make Serena very powerful in their eyes.

3. Speaking of the Waterford fanatics, is Nichole now in danger?

Remember when Luke mentioned the extra security looking over their house after Fred's sentencing hearing emboldened his supporters?

If June is linked to his murder publicly, these people could threaten everyone close to June - especially Nichole. Serena had completely let go of her claim over Nichole, but after June's actions she could change her mind and argue Nichole is safest with her.

4. Will Emily be implicated in June's crime?

Most of the post-finale discussion has been around what will happen to June after she leaves Luke's house, because main character energy.

However, we cannot forget who was standing alongside her as they attacked Fred: Emily.

Throughout the season we've had glimpses at how Emily is doing post-Gilead, and with June's arrival she's become much more out for vengeance than forgiveness. Is it possible for her to continue her life with Oliver and Sylvia in Canada after this?

I needed to ask this question as an excuse to show you these two SPECTACULAR tweets.

I'm sick of having absolutely no clue what the heck is going on in Joseph's head, and would very much like him and Nick to create a rogue Commander club.

I have nothing else to say about this other than PLEASEEEEEEEE.

I don't want to talk too much about where Atwood places Aunt Lydia in her sequel The Testaments (which is getting its own spin-off show, FYI!), because the show has mostly departed from the book now. But *spoiler alert*... let's just say when it comes to our least favourite cattle-prod fan, The Testaments brings good news, and the show seems to be setting things up for this.

She's been increasingly... angsty at the system this season, especially as it deemed her unsuitable for service and blamed her for the wayward Handmaids. 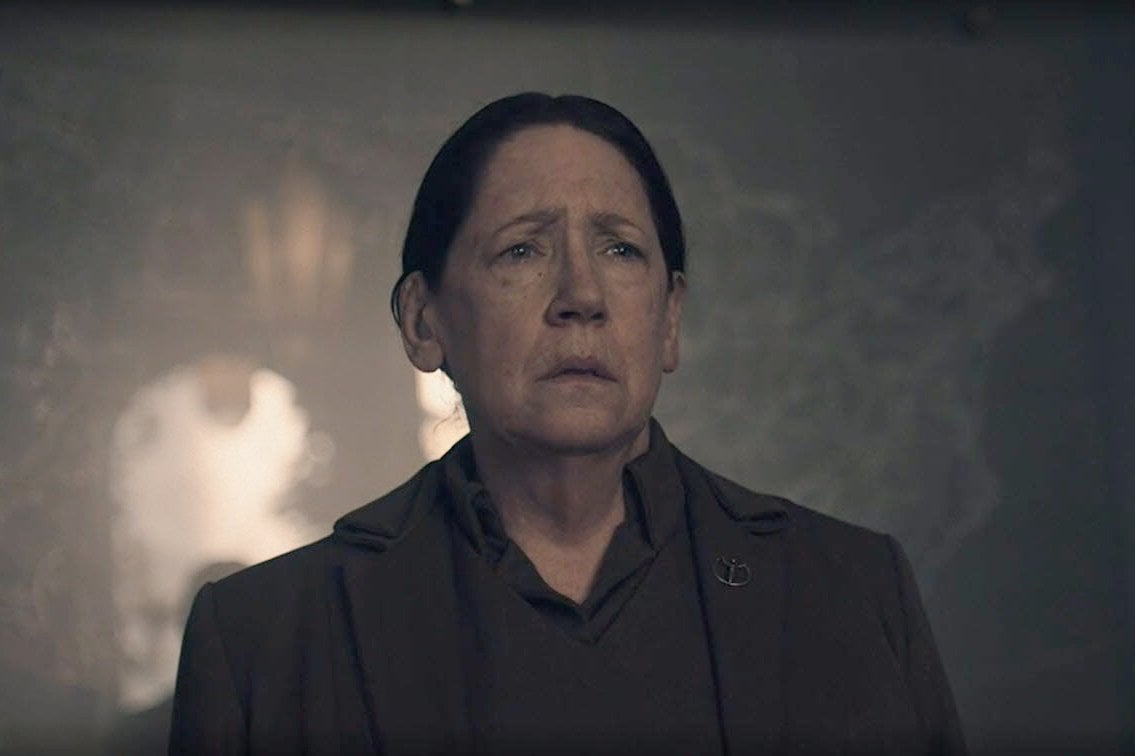 Thanks to Joseph, she's got her seat at the table back, but she's been going against the grain by avoiding finding Janine a new commander.

Could her fondness for Janine be the key required to unlock Rebel Aunt Lydia?

"When Janine says, 'Don't put me back into service, I'd rather die,' that was the same exact physical position, in the same spot, that June was in," Miller told Variety.

"I think that's a wake-up call for Lydia in realising that every single Handmaid she comes across would rather die than be a Handmaid, which is making her think about how to make Handmaids sustainable."

Janine talked Esther into co-operating with the Aunts in the name of survival, but June has left Esther as a mini her, murderous and intent of burning sh*t down.

"It's like June pulled the pin out of that poor girl and left," Miller explained to Variety.

"She's amazingly volatile and dangerous, so June's legacy is living on in Gilead in a big way." 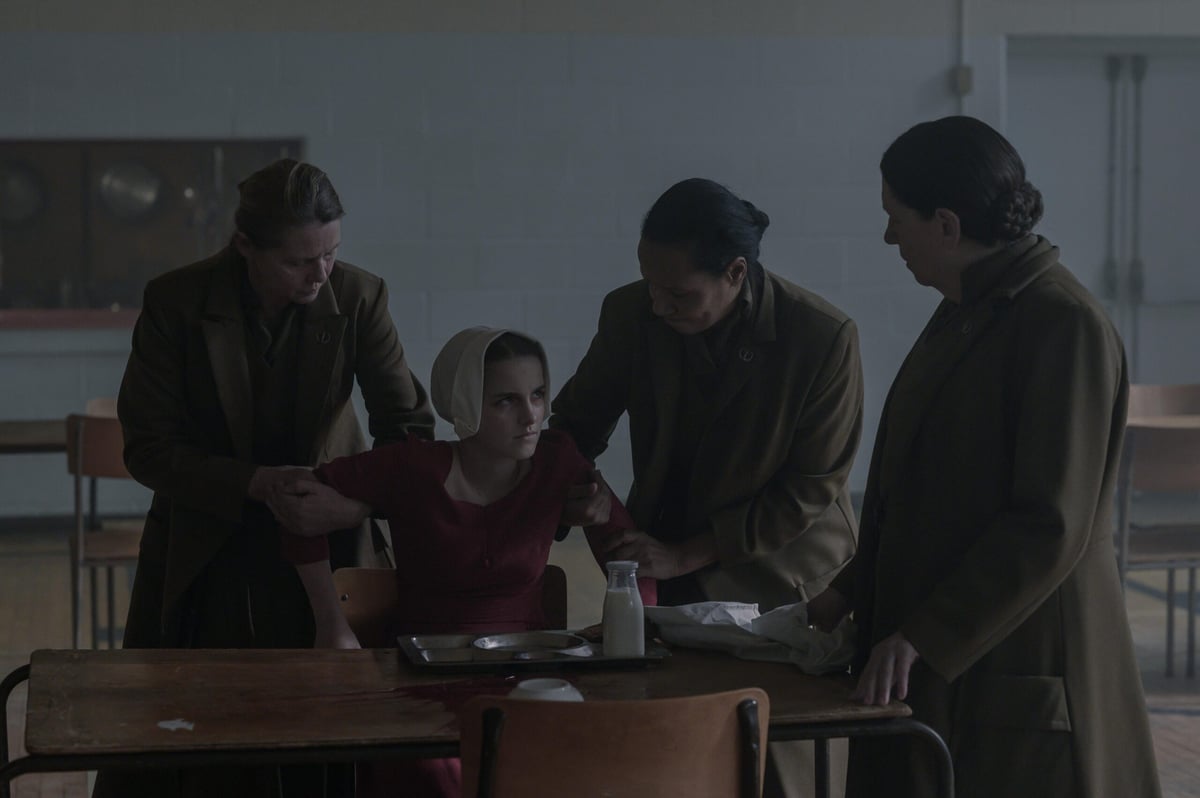 He also said: "we're going to definitely follow her through next season in Gilead with Janine and Lawrence and Lydia," which sounds like a fun and twisted alliance.

"There's a dynamic going on there that June is very interested in, having left those people behind."

Nick and his eyebrows are married and we haven't been privy to any of it. Rude.

There's a lot we need to be filled in on: who is he married to? Do they have a Handmaid? Do we know their Handmaid?

Season five as quick as you can, pretty please.

I don't want to talk too much about where Atwood places Aunt Lydia in her sequel The Testaments (which is getting its own spin-off show, FYI!), because the show has mostly departed from the book now.