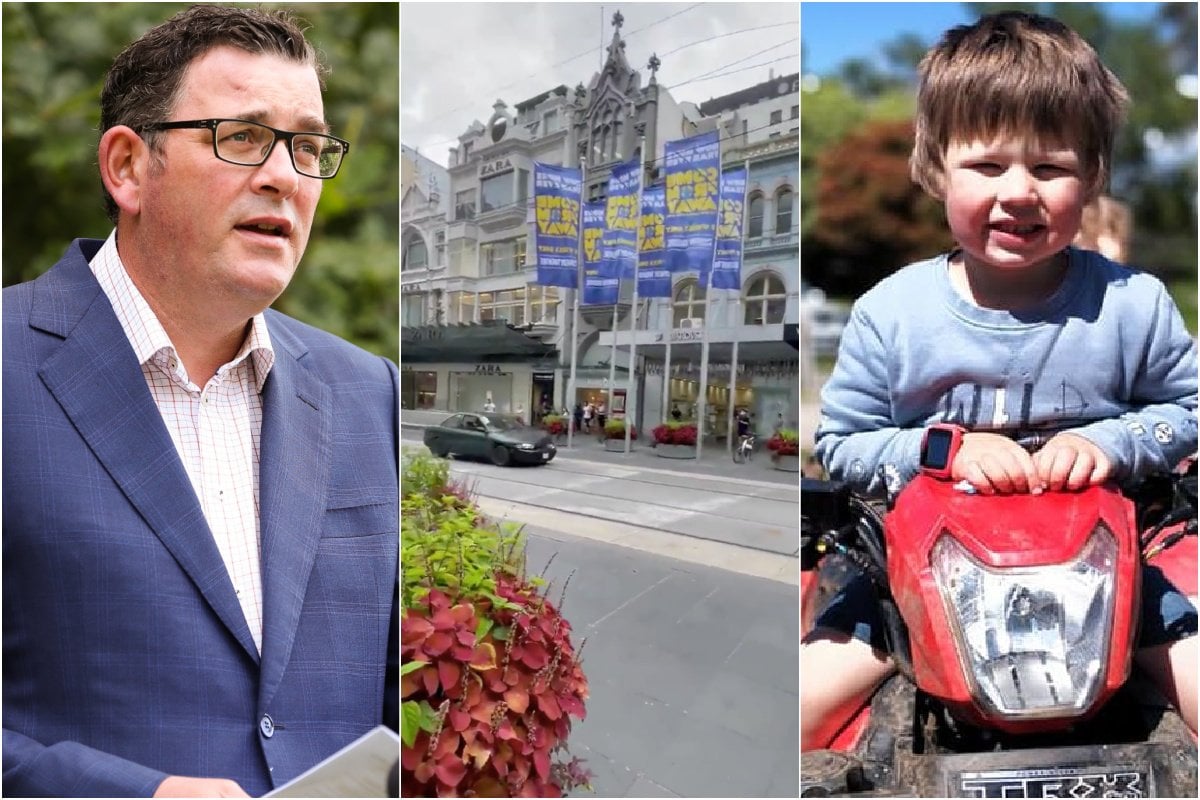 Neo-Nazi group chanting "Heil Hitler" as they descended on a Victorian town, condemned by state's premier.

Victorian Premier Daniel Andrews says there is "no place for anti-Semitism" after a group of far-right extremists were seen making Nazi salutes in a national park.

Thirty-eight white men allegedly from a far-right group assembled in the Grampians National Park over the long weekend, The Age reported on Thursday.

They allegedly chanted "white power", could be seen with Nazi tattoos, and addressed a Halls Gap local with a Sieg Heil.

"They don't seem to be very intelligent" - I spoke to some of the locals of Halls Gap, the Vic town descended on by neo Nazi thugs this weeked: https://t.co/uUYvSphLV1 @newscomauHQ

Mr Andrews on Thursday said he recognised anti-Semitism was on the rise in Australia and overseas, despite being "evil and wicked".

Mr Andrews said the Jewish community had made a profound contribution to Melbourne and Victoria.

"Anti-Semitic actions (and) activities affect the Jewish community deeply and it offends all of us," he said.

A man wearing a T-shirt representing a far-right group, known as Proud Boys, was removed by police from Melbourne's Invasion Day rally on Tuesday after he was involved in a brief scuffle with protesters.

Others were seen wearing Proud Boys clothing and draped in Australian flags as about 100 people marched down St Kilda Road in a "freedom" rally later that day.

Officers had tried to pull over the green Mitsubishi Lancer on Swanston Street just before 5pm on Thursday.

The car's bonnet had been badly damaged and a passenger side door was hanging open.

But the car sped away along Swanston Street before turning down Bourke Street Mall, driving along the tram tacks and crashing into a bollard.

Terrified shoppers have been forced to run for their lives on Melbourne's Bourke Street after a speeding diver tore down the bustling strip. #9Today pic.twitter.com/7EZfyP8hBj

A male passenger got out of the car and ran away, as police drew their firearms in a bid to stop the driver.

But he did a U-turn back along Bourke Street and escaped.

Officers found the car on Ashworth Street in Albert Park just before 7pm without number plates.

A helicopter was deployed to help track down the motorist.

There have been no reports of injuries from the incident, and police say they believe the driver was trying to escape arrest and did not intend to hurt people.

The male driver was last seen in the St Kilda area, and police are urging anyone who has seen the car to call triple zero.

In 2017, Melbourne's Bourke Street killer James Gargasoulas used a stolen car to mow down and kill six people in the busy CBD mall.

Fifth Order of Australia recipient hands back honour because of Margaret Court.

Uniting Church Minister Alistair Macrae has become the fifth person to reject his Order of Australia honour because of Margaret Court's inclusion this year.

Macrae was made an Officer of the Order of Australia in 2017 for his contribution to the church and his community.

"Her public comments in relation to LGBTI people – I won’t repeat them here – are damaging to significant parts of our community, and by no means represent the views of many Christians," Macrae wrote in an opinion piece for The Age.

Read More: 4 Australians have handed back their Order of Australia accolades. We need to have a conversation about morality.

Relatives of a four-year-old boy who died after being struck by a garbage truck in northern Tasmania say he was the greatest gift of all.

Bronson Williams was riding his bike on the street outside his home when he collided with the vehicle on Wednesday around midday.

"We had just taken him to school to get his new clothes he had tried them on just 30 minutes before the horrible accident took place," a relative posted on Facebook.

The family of a four-year-old boy who died after being struck by a garbage truck in northern Tasmania has remembered him as a “little angel”. #7NEWS https://t.co/wzfx2mUaaF

"He was so excited to start big school with his brother and sister. Bronson was very smart and had a bubbly personality and was loved very much by his siblings."

Police investigations into the circumstances around the crash are ongoing.

Tasmania Police Inspector Ruth Orr, who attended the scene, said it was one of the most distressing she had encountered in 25 years on the job.

There were several witnesses to the crash, police say.

Malka Leifer has for the first time faced an Australian court charged with sexually abusing three sisters while principal of an ultra-Orthodox Melbourne school.

Leifer sat with her head in her hands and did not speak as she appeared in Melbourne Magistrates Court on Thursday charged with 74 offences including rape and indecent assault against former students.

It was the 54-year-old's first court appearance in Australia. She arrived in the country the previous evening following a years-long battle to extradite her from Israel.

The former Adass Israel School principal faces 47 indecent assault charges and 13 of committing an indecent act with a child.

She's also accused of 11 counts of rape and three of sexually penetrating a child. All charges stem from between January 2004 and March 2008.

The abuse allegedly occurred in the Melbourne suburbs of Elsternwick, where the school is based, Elwood, Emerald and Frankston, as well as Rawson in west Gippsland and Blampied in the Central Highlands, court documents say.

The hearing was conducted virtually because of COVID-19 restrictions.

Leifer did not apply for bail. She must complete 14 days quarantine and has been remanded in custody to reappear on April 9 for a committal mention.

Victoria's travel restrictions are set to ease further with the expected elimination of "red zones" in NSW.

Victoria has reached 22 days with no new local coronavirus cases, and 27 cases confined to hotel quarantine.

The state government is expected to reclassify a number of NSW regions on Friday, with most of NSW to be classified green - the lightest level of restrictions in Victoria's coronavirus traffic light system.

Players started leaving the hotels on Thursday evening, with about 960 people expected to have finished quarantine by Sunday.

A total of eight people associated with the event have tested positive for COVID-19.

Restrictions on mask usage in Greater Sydney and the number of visitors allowed in homes and at other gatherings have formally eased, with changes to interstate border arrangements not far off.

Sydneysiders will from Friday be allowed to have 30 visitors in their homes while 50 people can attend picnics and other outdoor gatherings, including in yards.

There will be 300 guests allowed at weddings and funerals, while caps will be removed on corporate events, religious gatherings and hospitality venues. However, the "four square metre" rule still applies.

Masks will also no longer be compulsory in shops but people will still be obliged to wear them on public transport, at religious gatherings, in gaming rooms, at hairdressers and beauticians and in public-facing hospitality jobs.

NSW recorded zero new local COVID-19 cases in the 24 hours to 8pm on Wednesday and three cases in returned travellers in hotel quarantine.

It was the 11th consecutive reporting period without a local virus case.

A man has escaped with minor injuries after reportedly prising the jaws of a crocodile off of his head during an attack in far north Queensland.

Paramedics say the 44-year-old man man was bitten by a crocodile near Lake Placid Road, in the Cairns suburb of Caravonica, about 12.45pm on Thursday.

He suffered minor puncture wounds to his scalp, the side of his face, shoulder and finger. Critical care paramedic Paul Sweeney said he was lucky the injuries weren't "significantly worse".

Man prises crocodile jaws from his head while swimming in suburban Cairns https://t.co/Y21hnPhyCP

The man was swimming before he felt a "sudden impact" clasp on the top of his head that he recognised as a crocodile.

"He put his hands into the jaws to prise them off his head, and when he did so and let go the jaws snapped shut onto his left forefinger," Mr Sweeney said.

Having freed himself, the man took a "slow swim" back to shore for help.

"He was obviously concerned making that swim that the animal would come up and attack him again, but thankfully it didn't," Mr Sweeney said.

The man's vital signs were good and there was minimal blood loss, and he was transported to Cairns Hospital in a stable condition.

In an ambitious effort to stave off the worst of climate change, US President Joe Biden has signed executive orders to transform the nation's heavily fossil-fuel powered economy into a clean-burning one.

The orders include pausing oil and gas leasing on federal land and targeting subsidies for those industries.

The directives aim to conserve 30 per cent of the country's lands and waters in the next 10 years, double the nation's offshore wind energy, and move to an all-electric federal vehicle fleet, among other changes.

President Biden on Wednesday signed a series of executive orders aimed at combatting climate change. The orders specified that climate change, for the first time, will be a core part of all foreign policy and national security decisions. https://t.co/ajv3Xhwwr9

Biden's sweeping plan is aimed at staving off the worst of global warming caused by burning fossil fuels.

But his effort also carries political risk as oil- and coal-producing states face job losses from moves to sharply increase US reliance on clean energy such as wind and solar power.

"We can't wait any longer" to address the climate crisis, Biden said.

"We see with our own eyes. We know it in our bones. It is time to act."

Germany is preparing entry bans for travellers from the UK, Portugal, Brazil and South Africa to limit the spread of the more contagious variants of the coronavirus raging in these countries, Interior Minister Horst Seehofer says.

"To protect our population, there should be no entry from regions where these variants of the virus are rampant," he said on the fringes of a virtual meeting with his EU counterparts.

"We are concentrating these travel restrictions on mutation areas, that is at the moment Britain, Portugal, South Africa and Brazil," said German Interior Minister Horst Seehofer on Thursday.

Belgium has already barred residents from taking holidays abroad until March to fight the spread of the more infectious virus variants but other European Union members reject radical measures such as travel or entry bans.

Seehofer vowed Germany would go ahead with its plans even if the EU as a whole didn't agree with such measures.

"We cannot expect to have a European solution that meets our expectations any time soon, so we are preparing national measures," he said.

The EU meanwhile cut Japan from its list of countries from which travellers can visit the bloc without coronavirus-related restrictions such as quarantines or mandatory tests.

After the changes, the list will consist of seven countries - Australia, China, New Zealand, Rwanda, Singapore, South Korea and Thailand.

Meanwhile, the UK added the United Arab Emirates, Burundi and Rwanda to its coronavirus travel ban list starting from Friday.

- An international team of scientists has just cleared quarantine in Wuhan, China to investigate the origins of COVID-19.

- Hungary's Olympic Committee is preparing a bid to host the 2032 Summer Games in Budapest with a view to joining the race in which Australia has taken an early front-running role.

- A court in India has ruled that groping a child through their clothing does not constitute sexual assault.