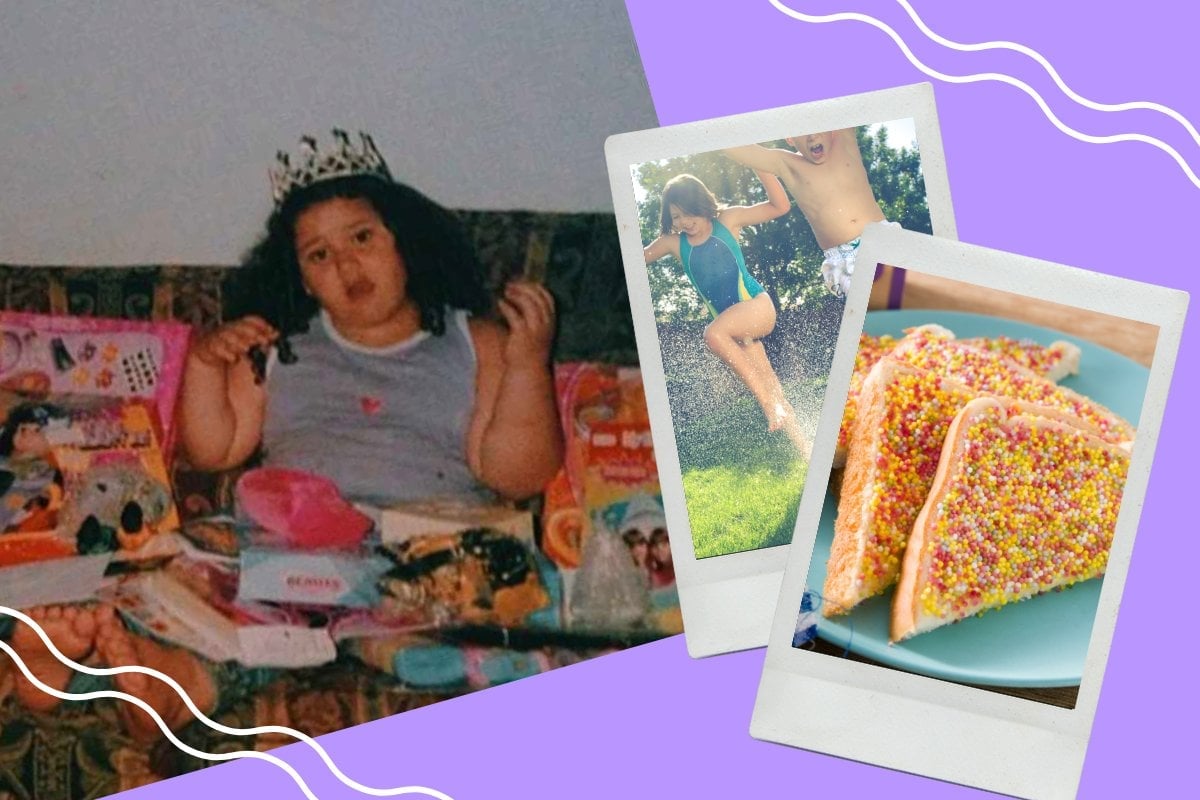 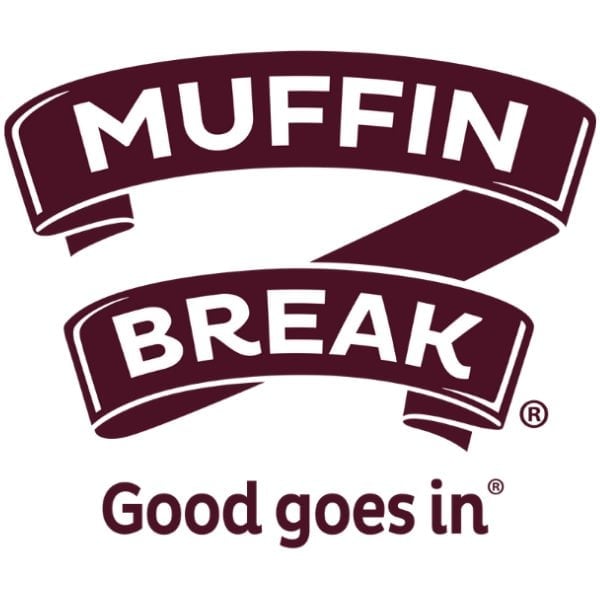 Thanks to our brand partner, Muffin break

Gather round kids, this 23-year-old Gen Z-er wants to tell you all a story about the days gone by.

If you grew up in Australia, then there are just a few memories of this big beautiful piece of land that would make you feel fuzzy inside. Memories that whisk you back in time to a world where life was... well, simpler.

Think back to what it was like growing up here. Do you remember the long, lazy summers? Sunsets that stretched on forever? The piping hot fish and chips down at the beach?

What about the glorious fairy bread that broke apart in our mouths and reminded us of heaven?

In 2022, it sure is nice to look back and remember a time where our world simply wasn't so chaotic (ah, precedented times!) and our days were a lot more pure.

And because I am just so sentimental, I thought: why not share the childhood memories that only those of us who grew up in Australia could ever understand?

Warning: things are about to get incredibly nostalgic... 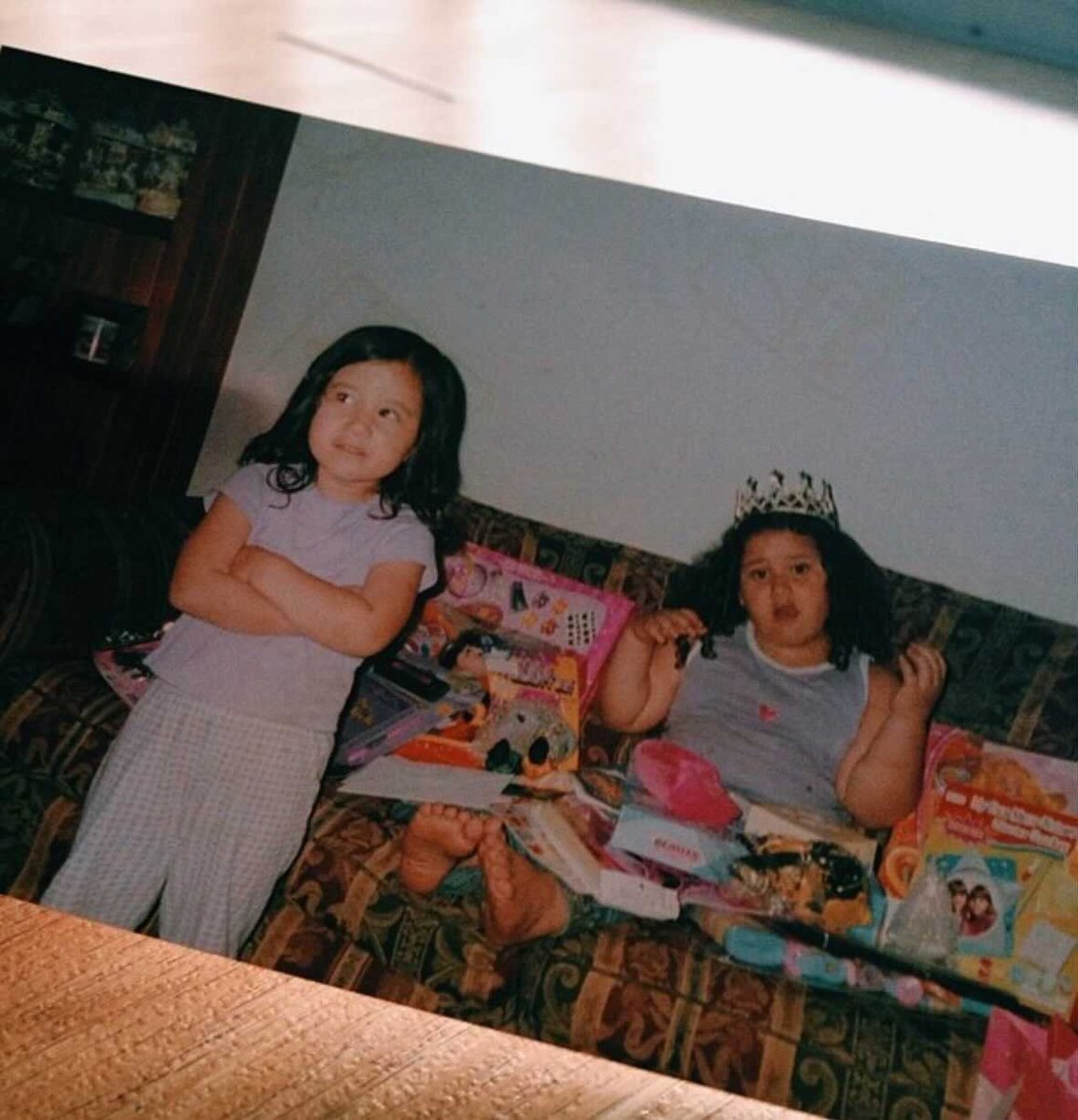 We all remember the taste of fairy bread growing up – lightly buttered bread sprinkled with 100s and 1000s.

There was nothing quite like going to a friend's birthday party and seeing a plate full of sprinkled goodness waiting for us to devour.

Of course, they've been a childhood party staple since (what it feels like) the beginning of time. In fact, fairy bread dates all the way back to the 1920s as a celebration food for kids.

See?! I was partially right. And I don't believe I'm alone when I say kids' parties these days are not like how they used to be.

Nowadays, we typically opt for extravagance over at-home celebrations filled with the games we all know and loved.

Imagine it: Clamouring over each other to be the last person sitting during musical chairs. Or the one who got the coolest gift while passing around the newspaper-wrapped parcel. Or cheering on that kid who was down to their last bite, with their hands were tied behind their back, during a donut-eating contest.

All the while knowing there was a table filled with the glorious party food staples – AKA fairy bread.

And now, Muffin Break has taken to reinventing the Aussie classic with a twist. I'm overjoyed and was on board even before laying my eyes on it.

The Fairy Bread Duffin is made with a mouth-watering Cinnamon Sugar Duffin Base, filled with vanilla custard, and covered in – you guessed it – a delightful amount of 100s and 1000s.

One small bite and you're whisked straight back to a childhood long gone... it's a seriously emotional experience. IYKYK. 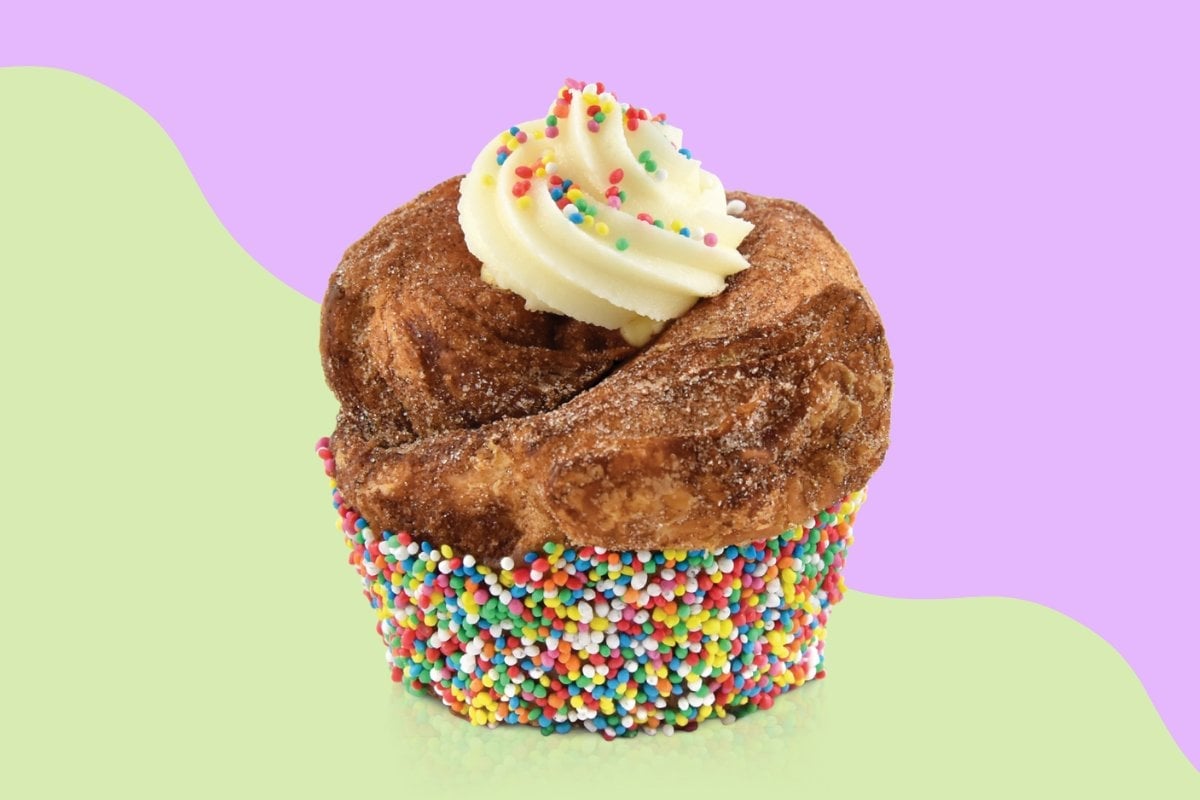 Get in my belly. Image: Supplied.

2. Having to take time to pick bindis out of our feet.

One simply does not know pain until you've got a bindi in your foot.

Having to hobble to safety without stepping on another one was the type of psychological mind game where our fates were already signed and sealed for us.

Of course, we never learnt our lesson. Minutes later, we'd be back to treading through the grass barefoot - or ignorantly hopping right onto another bindi, under the misguided belief that a pair of socks "will do the trick".

Newsflash: it never did.

Our childhoods are (rightfully) haunted by being forced to sit out of a day's worth of activities as our friends tackled each other and played hand games under the sun during lunch time... All because we'd forgotten to grab our hat off the washing line the night before for school.

Of course, it's understandable why those rules are in place (purely for our little skin's protection), but it didn't make the feeling of being forced into a lunch time isolation any easier.

It's the most legendary game of all - and somehow the most competitive.

Heads Down Thumbs Up is for no ordinary primary schooler and is a reminder of just how cutthroat a group of 10-year-olds could be.

If you need a recap, let me explain.

You're in a seated group, itching to be chosen so you can be the bringer of thumb-death. Whoever gets chosen circulates the room filled with students, whose eyes are closed, and picks one person's thumb to pinch.

The aim of the game is to be as quiet as possible, and move like a fox so the person you picked doesn't know it's you.

Then, the chaos ensues.

Oh, it's the truest Australian game ever played and is certainly in the mind of every single kid who went to primary school here.

Somewhere, somehow, a child is accusing their best friend of being the one who squeezed their finger.

Hazy summer days could only be made better with water fights from the hose.

If you were lucky, you had water balloons to truly commemorate the event. I can't be the only one who grew up with their neighbours peering behind a bush with a super soaker in their hand, ready to attack the first unsuspecting kid they come across (i.e. you).

It's no secret that an Aussie's kid first moment of shame is being shown up during a game of water limbo - not a myth, just a fact. Plain and simple.

6. That beloved collection of seashells.

We all have that memory of collecting dozens of seashells – all similar in nature, but slightly different.

We'd wrap them up in our towel and shuffle our most prized possessions back to the car, but not before being chastised by our parents for bringing yet another collection of seashells we won't ever remove from the tupperware container at home.

In the end, those seashells would be thrown out by our mum, who'd complained that it had begun to... smell. 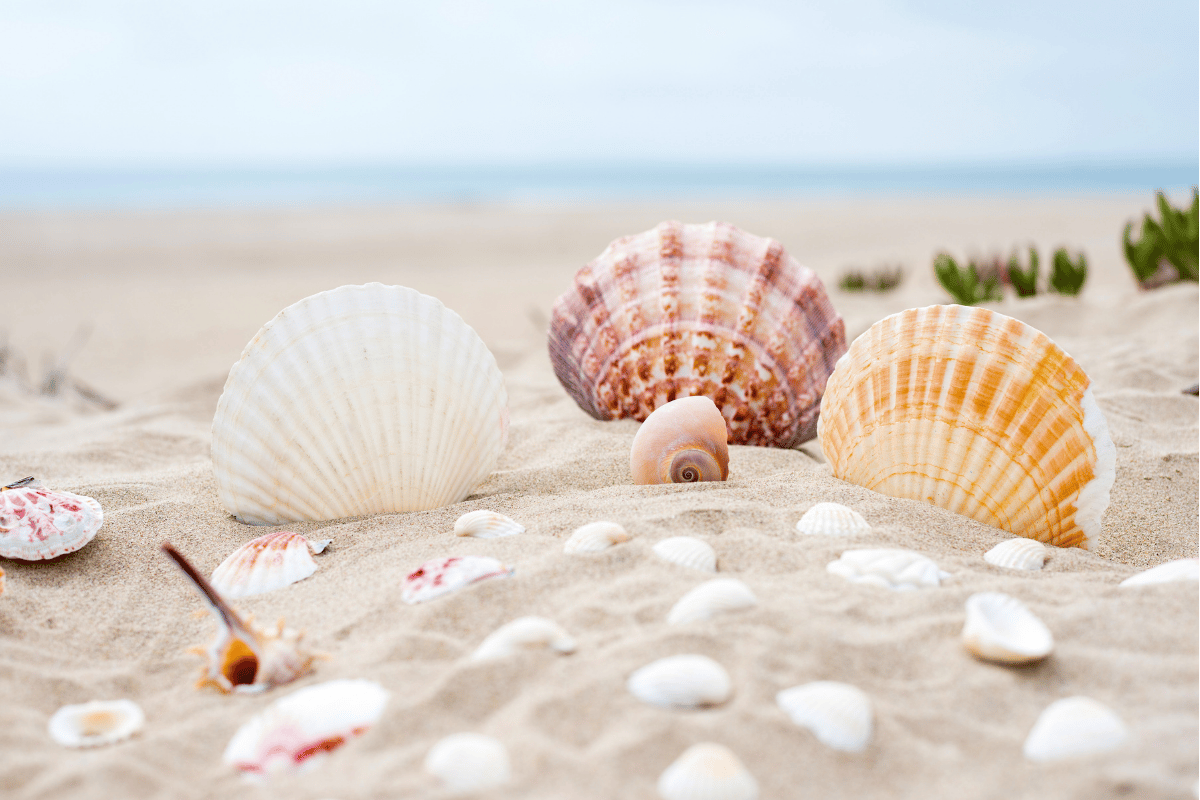 We all had a collection of seashells as kids. Image: Canva.

7. Getting to leave school for a doctor's appointment.

It's happened to the best of us: getting the opportunity to leave school (how THRILLING) for a doctor's appointment and come back with fast food tucked safely in our backpacks for lunch.

It was surely the favourite part of our school day/term/life.

8. Choosing to have windows down over air-con.

The stifling summer heat may have been hard to deal with, but we almost always chose to have the car windows down and the wind in our hair over the freezing air conditioner.

Even now, as a fully grown adult, there's still nothing quite like having the windows down during a ride home from the beach (and considering the gas prices nowadays, it's the easier option).

While I may only be a Gen-Z (who is still a kid in many ways), I do remember the days of having to dial-up for a few minutes of playing games that of which required internet.

While my cousins were getting their designated time on the computer to polish off homework, I was typing in 'cool games for kids' with a speedy vengeance.

And I have enough pride to admit I'd spent an unruly amount of time begging my mother to give me some extra minutes in front of the screen – just to continue on with my Sims adventures.

Those were the days...

The best, quintessential part of growing up in Australia for me were the hazy summer holidays by the beach.

Nights by the fire with a sausage sizzle in hand, sunburns in the shapes of circles on our back (sorry Mum) and an imminent ear infection from all the swimming.

It doesn't get much better than reflecting on these times, mostly because our days were filled the type of innocence that allowed us to dig sand out of our swimmer bottoms (in front of the whole beach) without shame.

Certainly the best times were the moments we were left to entertain ourselves - which typically meant we ended up competing with another group of kids on who could make the bests sandcastle (and somehow, it was never quite you, NO MATTER how many hours you dedicated to the art).

Either way, it doesn't matter what generation you come from.

Because there really is nothing quite like being an Aussie kid.

Muffin Break’s all new Aussie creation, the Fairy Bread Duffin, is a fun take on your favourite childhood party food. Covered in sprinkles, it’ll take you straight back to your fun-filled 8th birthday.

Available now at all Muffin Break cafes and Menulog.

The Fairy Bread Duffin is available at all Muffin Break cafes and Menulog until May 15th. Enjoy it with a coffee or grab a 4 or 6 pack for your next party!