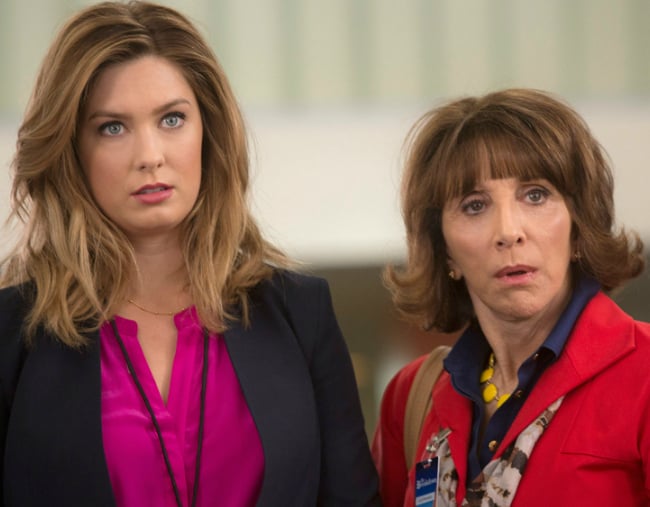 I’m not the easiest TV viewer to convince. Despite the rest of the world telling me Orange Is The New Black is the best show on television, I still haven’t brought myself to clicking the play icon.

So I don’t know why I decided to give Netflix’s new series Great News a chance this week, but I’m so glad I did.

Because just over an hour later I was actually rolling on my couch (not quite the floor) with tears of laughter in my eyes as the third episode came to an end.

I then immediately texted my mum and sister and told them they HAVE to watch this show.

Not only did each 22-minute episode make me actually laugh out loud, but it has a plot that centres around a mother-daughter relationship that I for one, could completely relate to.

The premise is a simple one: Katie (played by Briga Heelan) works at a mid-afternoon news program, The Breakout, where her 60-year-old previously stay-at-home mum Carol takes a job as an intern.

As you might expect, Katie isn't exactly thrilled with this development, and, like most twenty-somethings would, struggles to deal with the embarrassment and privacy-invasion that comes with your mum sharing your workplace.

But you don't have to have had your mum break into your own industry (or, for that matter, go to work with your daughter) to see aspects of your own mother-daughter relationship played out (in an exaggerated way) by the characters of Great News.

Anyone whose mum can be a tad smothering, intrusive, or meddlesome - and any parent who has a little trouble letting go of their adult child - will find this show completely relatable.

But as many truisms as Great News boasts, it doesn't stop it from being over-the-top and a bit wacky at the same time. For example, there are jokes about the show's co-anchor Portia (played by Nicole Richie) requesting to wear a see-through skirt for the broadcast and pitching news story ideas like "why does bathroom water taste sweeter than kitchen water?"

The clever and funny dialogue is delivered with perfect timing and tone by the talented cast - with a clear standout being Andrea Martin, who plays Carol Wendelson.

Martin's Carol is a New Jersey mum who helicopter-parents her daughter and has problems with boundaries. She's also delightfully ignorant at times, which adds to her charm, and isn't something that ever comes off as patronising.

Add in a doofus of a male co-anchor with a temper and a fear of being replaced, along with a slightly nervous executive producer and an intimidating weather expert and you've got a cast that plays off each other perfectly.

It's quality made perfect sense once I learned comedic genius Tina Fey and her Unbreakable Kimmy Schmidt co-producers Robert Carlock and David Miner were behind the project as executive producers.

Sadly, the show was cancelled after the second season. But who knows - maybe it's move to Netflix may fuel demand for more seasons. I'll certainly have my fingers crossed for it.

You can watch the first season of Great News on Netflix right now.