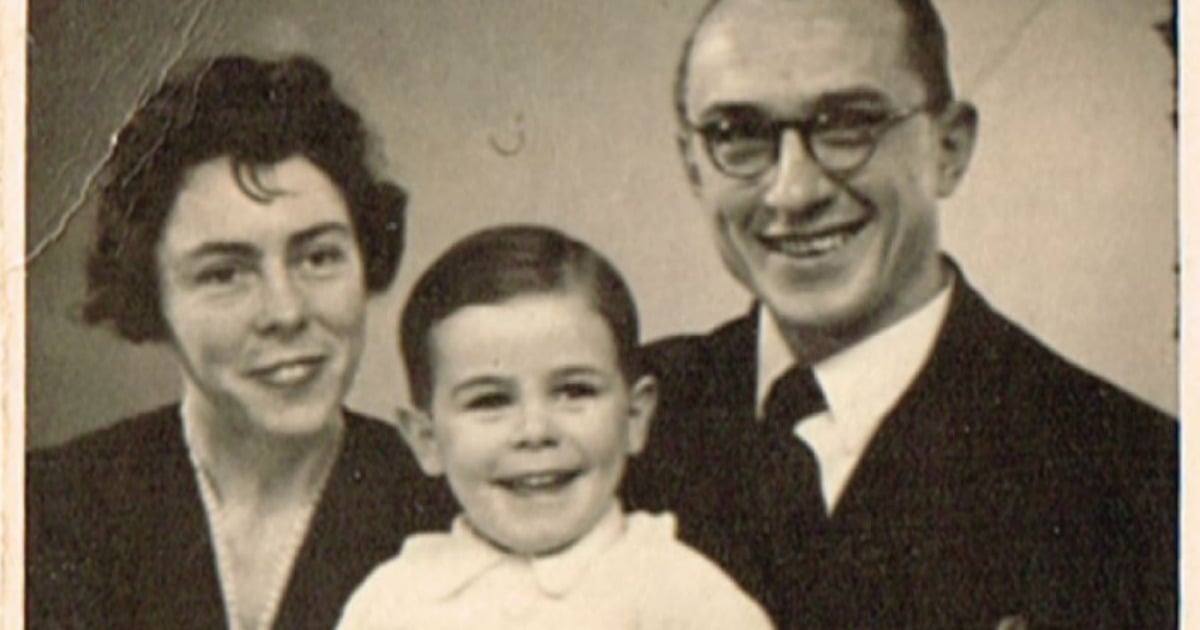 By Minna Muhlen for Earshot.

As a kid, I knew my grandad had fought in World War II. There were reminders of him around the house: the old wristwatch, the strange old, scratchy, grey wool blanket that he supposedly sent back from the war.

But it wasn’t until Anzac Day at primary school that I realised he hadn’t fought on the same side of the war as other Australian grandads.

He was Joachim — to us, Achim — a German who died fighting for Hitler’s Wehrmacht, the German army, on the Eastern Front in January 1945.

Over 50 years later, my two brothers and Dad retraced Achim’s last footsteps on a train that wound its way through south-west Poland. Outside it was -30 degrees, one of Europe’s coldest winters since January 1945.

Inside the train carriage Dad was asleep, slumped against the window pane, but my brothers were awake laughing and drinking.

Reaching inside his bag for snacks, my brother accidentally pulled out Achim’s last letter and staring out at a landscape obliterated by ice and snow read:

Worked through the night, luggage is packed. Heavy artillery fire. Morale is good.

All my love, always your own Achim.

This letter, scrawled on a piece of lined paper, hole-punched in the left margin, is held in the State Library of Victoria’s manuscripts collection.

It is the last news of my grandfather, who disappeared somewhere between the Polish towns of Kielce and Glogow, three months before World War II ended in Europe.

When I asked my family about this trip they all told me a different version of events, because I think it meant something different to each of them, and because memories always change according to the feelings we attach to them, the story we want to tell ourselves and others at the time.

Now, some 72 years later, I’ve been trying to understand the impact of my grandfather’s death on my family.

His death is one among an estimated 30 million people who died on the Eastern Front during World War II. The apocalyptic scale of this front is hard to imagine.

The death toll includes Russian and German civilians, and most of the Holocaust sites, from extermination camps, to pogroms, death marches and ghettoes throughout Eastern Europe.

What is the significance of Achim’s story amidst this history? Each time his story is told it prompts a series of questions and a hunt for information to somehow reconcile the past.

What we most want to know, and never will, is how much of the Nazi regime he believed in. What did he witness of the Holocaust?

It's an unwanted inheritance for his children and grandchildren who are starkly disconnected from Australia's Anzac tradition.

My family is frozen with the unpalatable history that Germany began to confront as a nation during the 1960s.

The German language even made room for the seemingly endless word Vergangenheitsbewältigung — the struggle to come to terms with the past, or its contrary twin meaning, to wrestle it into submission — to explain the collective guilt of a generation who questioned their parents' wartime actions.

Of course, the other half of this story belongs to the woman who received my grandfather's letters, my Australian grandmother, Muriel Mudge.

When she was 81 years old, Muriel donated Achim's letters to the library along with a poorly written memoir.

Typed on lavender paper, it has the qualities of a coming-of-age adventure or the flourishes of a Mills & Boon novel.

But it is an interesting account of how Muriel was caught between enemy lines in her homeland and abroad.

Because she married a German "enemy alien" in Australia, she had to renounce her British citizenship, as prior to 1948 all Commonwealth citizens were British.

She then moved to Nazi Germany with Achim on the brink of war, where she was known as an Engländerin (Englishwoman) and lived through the Allied bombing of Berlin.

After waiting in vain for Achim to come home, she returned to Australia where she was required to reapply for her citizenship.

Muriel's story typifies the blurry definitions of citizenship and the amorphous nature of national identity in wartime.

Achim's letters give us another insight into how they tussled with each other's national identity and the war's conclusion.

Where is your British sense of humour which is supposed to carry your race through even the most awkward and unpleasant situations? Has it really evaporated under the stress of the last couple of months? Then I could only hope your compatriots across the channel are equally near giving up the ghost ...

You can let your Irish temper flare up as much as you like over anything you like, I enjoy it, I love to see sparks fly out of you, but I'm helpless and lost when I get "I-want-to-lie-down-and-die" sort of letters from you.

But Muriel's story also shows us the shaky relationship between memory and history.

Writing in 1980s Australia, she tries to patch over old allegiances, gloss over awkward memories, revealing holes as obvious as the stitches that hold her story together.

Most glaring is her explanation of why they left Australia in 1938 to live in Germany.

Muriel claims that Achim had a job in South America and they went via Berlin to farewell his family.

Our little family only had a few weeks in Germany before catching the ship the Santa Rosa to sail to Buenos Aires on the 3rd September, 1938. The day before sailing, September 2nd, was a flawless day. The Muhlen-Schulte family ... were all gathered when over the radio they heard the words uttered in London ... that Britain was at war with Germany.

Of course, her dates precede the outbreak of war in September 1939 by a whole year.

Shipping records also undermine her story, showing their departure from Australia on the Mariposa in June 1938.

This was the year my Dad was born and photos show him as a toddler in Berlin when war broke out the following year.

By shrinking the window of time from a year to "a few weeks", Muriel invented a dramatic version of events where history overtook them, leaving them in the role of ill-fated bystanders.

But even as a bystander Muriel is conspicuously silent about living under the Third Reich — apart from one fleeting reference to the Holocaust, which feels like a disingenuous insertion from 1981, when she was living among survivors in Melbourne.

Photo albums give me a clearer idea of the family's political sympathies. Muriel is pictured giving a sieg heil or Nazi salute in the Australian countryside. She was obviously swept up in the glamour of both 1930s Berlin and its regime.

So were many Australians prior to September 1939, as author David Bird documented recently in his book Nazi Dreamtime. Academics, politicians and ordinary citizens travelled to Nazi Germany and were filled with admiration for Hitler's vision, including prime minister Robert Menzies and controversial NSW police commissioner William Mackay.

Muriel's silence about the Holocaust is even more pronounced when contrasted against oral history interviews with Achim's family who witnessed events like Kristallnacht in November 1938, the Night of the Broken Glass, which culminated after boycotts and violence against Jewish businesses.

Achim and Muriel were in Berlin at this time, but neither of them mentioned it.

There are also family stories that Achim let Muriel listen to the BBC in Berlin if she hid with the radio in the wardrobe. From late 1942, BBC broadcasts frequently spoke of the gas chambers and it is believed that up to 15 million Germans listened in secret to these reports every day.

I feel as though Muriel consciously omitted these events from her memoir.

In late 1944, Achim was sent into the Wehrmacht as it retreated east from Russia. It was a punishment sentence for allowing the staff of his business to leave work and return to their families as the war ended.

He wrote 52 letters to Muriel over four months, but there are silences in his letters too. This is despite the fact that his letters appear uncensored, including describing a Nazi official as a "narrow-minded pig-headed bumptious fool".

His disappearance abruptly cut short his story until 1973, when Muriel received a German Red Cross report.

On January 12, 1945, German intelligence had mistakenly estimated Russian forces would outnumber them by 3:1. In fact, the ratio was 5:1.

Achim fades into the report's last description of his unit, 17th Panzer Division.

They may have died in action, or "met their death in the heavily snowed-in forested regions as well as while crossing the Pilica River without having been noticed even by their fellow soldiers close-by".

Through my research, I've tried to provoke Achim and Muriel's silences into something tangible: to understand how they use silence to conceal what they witnessed, ameliorate guilt and create a narrative about their lives they and their family could live with.

And it has revealed the powerful way in which memory within families can return and haunt the present.

In 1997, when Dad caught that train through the south-western part of Poland, he says he wasn't asleep but vividly remembers staring out the window, trying to imagine the scale of Soviet offensive on January 12, 1945.

The barren, flat landscape covered in snowdrifts hid any landmarks from view.

But for Dad, the journey was the closest he felt he would get to finding his father, Achim.