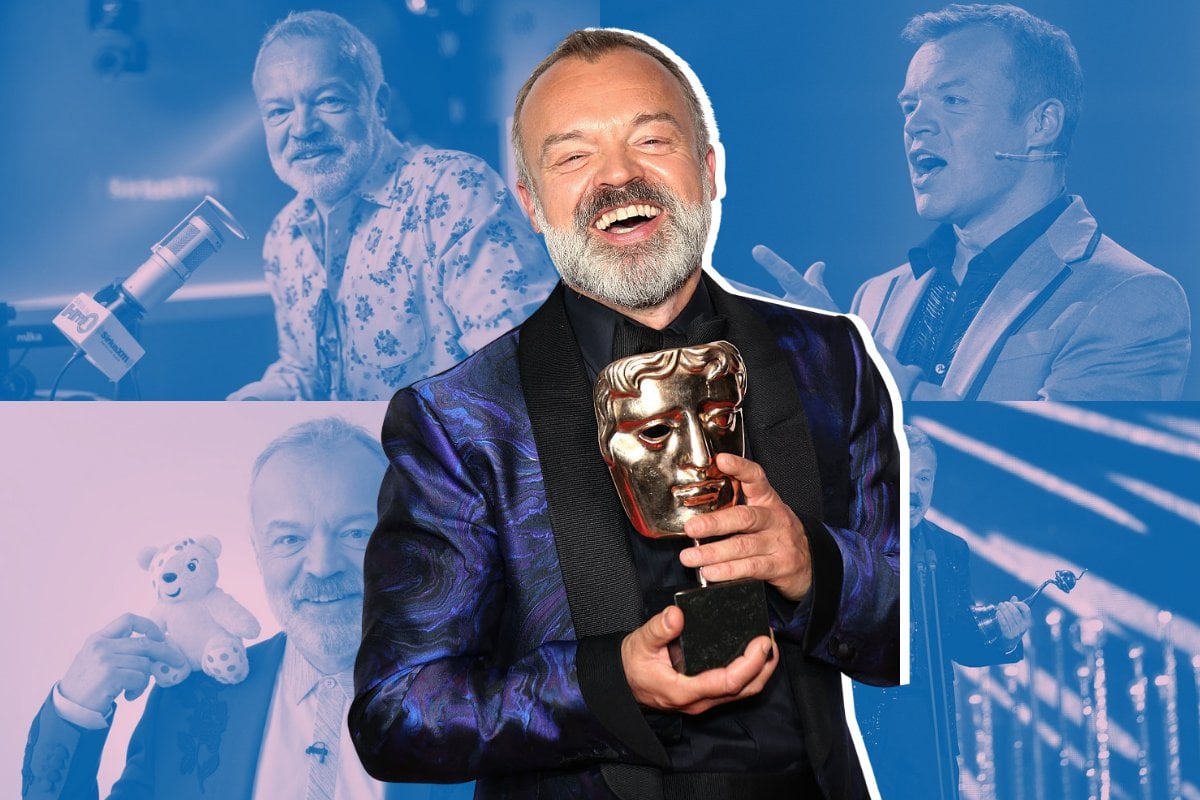 Graham Norton is one of the UK’s most loved TV personalities, earning millions for chatting with celebrities on The Graham Norton Show.

But as a young boy, growing up as Graham Walker in the small town of Bandon in Ireland, he always felt “foreign”. He thought it was because he was a Protestant surrounded by Catholics, but it was something more than that.

As Norton puts it, he was a “tiny transvestite”.

Watch: The Best moments of the Graham Norton Show. Post continues below.

Video via The Graham Norton Show.

“My sister had prettier clothes,” he told The Guardian.

Norton had a brief relationship with a male exchange student, but felt he couldn’t tell his parents he was gay. He struggled with the idea himself, thinking he’d be “a social pariah”.

In his late teens, he wanted to be an actor, but ended up studying English and French at university in Cork, suffering a kind of breakdown and refusing to leave his dorm room.

“But I was never diagnosed, so I don't want to kind of trivialise,” he told the Independent.

"But I did kill a lot of flies and then keep all their bodies.”

Norton headed to San Francisco where he joined a hippy commune. Short of cash, he decided to become a rent boy. When he was asked to “perform” for the pimp, he changed his mind.

"Given that my only homosexual experience up to this point was a fumble in France in a tent, it seemed a teeny-weeny bit sexually ambitious," he later said.

After that, he had a year-long relationship with a woman, while still having flings with other hippies in his commune.

Later, Norton moved to London, studying acting, as he’d wanted to do. One night in 1989, while walking home, he was mugged in the street and violently stabbed. As he lay on a doorstep, bleeding to death, the elderly couple who lived in the house came to his rescue.

"I'm on this mat and I didn't know I was dying, I didn't figure it out until later, and this is so not me but I remember saying to this little old lady, 'Will you hold my hand?’" he recently said on the podcast How To Fail.

In his autobiography So Me, Norton says his boyfriend at the time insisted on attending his self-help group before visiting him in hospital. Norton lay in the hospital bed thinking, "I've lost half my blood and all my boyfriend.''

Norton recovered and finished drama school. He changed his name from Graham Walker to Graham Norton, because there was already an actor called Graham Walker. But he struggled to find work and felt like a failure.

It wasn’t until after Norton turned 30 that he went from wiping tables in restaurants to a career in showbiz. Living in a tiny flat, he put a tea towel on his head and created a one-man comedy show based around Mother Teresa of Calcutta.

Soon he was on TV, hosting quiz shows such as Carnal Knowledge. He finally made it as an actor, playing Father Noel Furlong on the comedy series Father Ted.

“It’s one of those things where I thought I was playing this kind of huge character but whenever it’s on I think, ‘He’s quite like me,’” Norton told VIP.

Before long, it became clear that Norton’s greatest talent lay in talking to celebrities. In 1998 he began hosting the first in a string of talk shows, So Graham Norton. The Graham Norton Show has been running since 2007.

In that time, he’s had all the big names, from Madonna to Tom Cruise to Chris Hemsworth, and got some amazing TV out of them.

Who can forget when Hugh Grant re-enacted his love scene from Four Weddings And A Funeral with Norton, complete with rain pouring down on them? Or when Benedict Cumberbatch impersonated an otter?

One of Norton’s all-time favourite moments was when Will Smith did a rendition of the Fresh Prince Of Bel-Air rap, along with his son Jaden, DJ Jazzy Jeff and Fresh Prince co-star Alfonso Ribeiro. Norton told the Huffington Post the audience were so happy, “it was like a drug”.

“It was like Oprah giving away a car to everybody. It was that atmospheric.”

But there have also been interviews that have gone wrong.

Raquel Welch wasn’t impressed with Norton, telling him he should aim for a “higher level of taste”. Norton cut off her satellite link and called her a “grumpy old bitch”.

Mark Wahlberg was very drunk when he appeared on the show and kept interrupting his fellow guests Sarah Silverman and Michael Fassbender when they were trying to tell stories. Eventually he fell asleep.

“We didn’t wake him,” Norton told This Morning. “We were delighted.”

Norton once said he was his worst guest was Harvey Keitel, who “had a fit” because Norton had an action figure of him with a gun.

“But once you've been in Reservoir Dogs, it's a bit late to tell kids don't play with guns," he told the Independent.

Keitel hated Norton’s show so much that he reportedly tried to talk fellow actor Dennis Hopper out of going on it.

Norton hasn’t tried to hide that he has his vices. In 2006, he talked to Marie Claire about having used cocaine and ecstasy, but said that as he got older, he was more likely to stick to alcohol.

"Let's face it, I've tried lots of drugs but what would really bug me if I got busted in the tabloids is that I do them so rarely. Alcohol is my thing.”

In So Me, Norton described himself as a “borderline alcoholic”. In 2013, his ex-boyfriend Trevor Patterson spilled to the Mirror about exactly how much Norton drank.

“It would be four boozy dinners a week and then more wine at home,” Patterson said.

“Graham would put away maybe three or four bottles, then vodka and tonics. Then we’d get home and he would have a nightcap.”

He said Norton would sometimes be so drunk that he “passed out in the dogs’ basket”. At the time, Norton had two dogs, labradoodle Bailey and terrier cross Madge, and he was devoted to them.

“There were four of us in the relationship and in some ways he put them before me,” Patterson added. “It was hard to be left out, but it was clear they were his priority.”

Norton, now 58, has dated a string of men over the years, including Kristian Seeber, aka Tina Burner from RuPaul’s Drag Race. But earlier this year, he told The Sunday Times he’s never come close to getting married.

“I suppose, in my head, I’ve met people that I thought I wanted to spend the rest of my life with, but they did not share that view.

“You know, I think to get close to being married, two of you need to do it. So, no, I have not got close.”