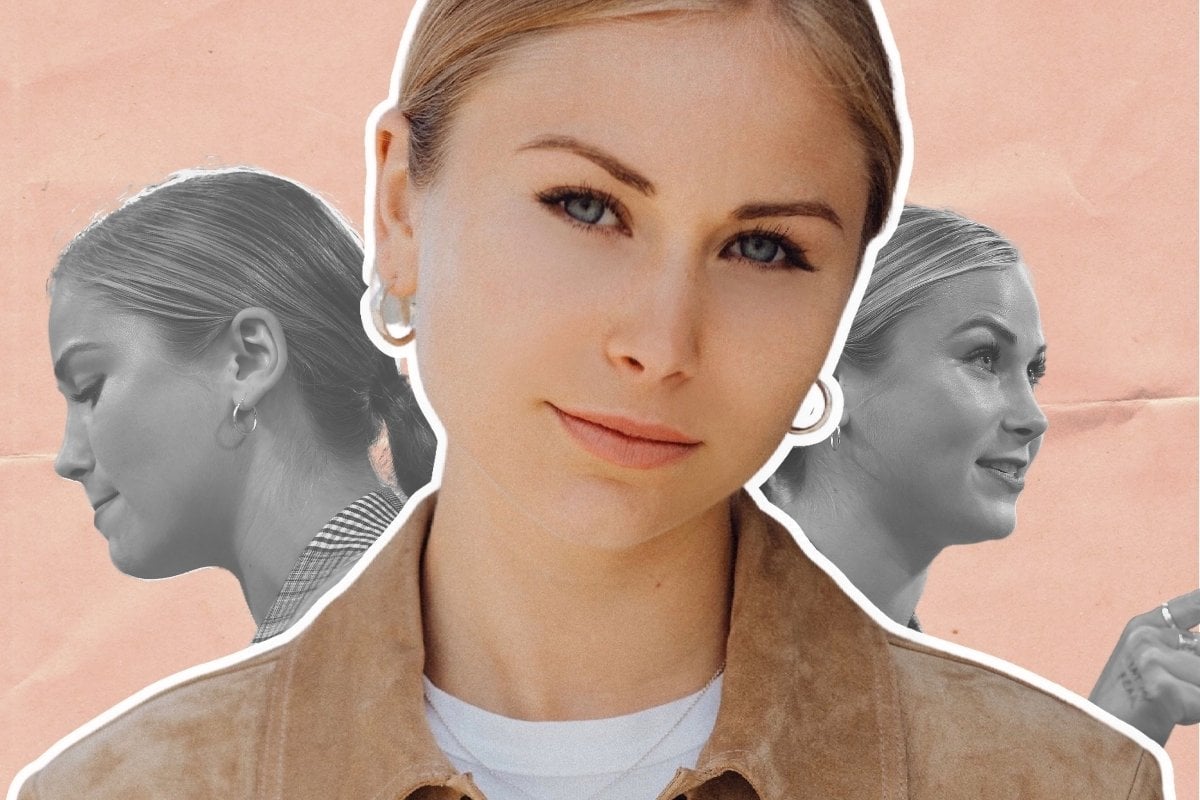 The following contains details of child sexual abuse, which may be triggering for some readers.

As a teenager grappling with the trauma of being sexually abused by her teacher, Grace Tame had only a vague idea about what 'grooming' meant.

She knew it involved preparing a person for abuse. She knew, courtesy of conversations with a psychologist after disclosing in 2011, that her perpetrator had followed a "textbook-like" approach. She could even identify examples of how he had manipulated and silenced her so that his crimes could continue unchecked for six months.

But it wasn't until Tame connected with journalist Nina Funnell in 2017, that she came to truly understand the horrifying pattern of his behaviour.

Watch: Grace Tame on the importance of listening to survivors' stories. Post continues below.

Tame and Funnell had instigated the #LetHerSpeak campaign, an (ultimately successful) effort to change a Tasmanian law that prevented child sexual assault survivors from identifying themselves via the media.

"What motivated me to tell my story was that I knew that there was so much more to it than rape, so much more than the physical side of what he did, and I really wanted to expose that. I just didn't have a lot of clarity about how I wanted to go about it," the 26-year-old told Mamamia.

"But it was during that process of rehashing my story with Nina that, one night, I actually looked up what 'grooming' was. And it shattered me.

"It was equal parts confronting and validating because, for the first time, I could put a name to those [behaviours] and I could relate to every single aspect down to the finest details. But it was a horrible feeling to realise that had been done to me, that I had been treated in that way for this person's own gain — exploited and devalued."

Tame, who is the 2021 Australian of the Year, has since leveraged the platform earned via the #LetHerSpeak campaign to contribute to education about the process of grooming.

This Child Sexual Abuse Awareness Week (October 18–24), she has dedicated a tweet per day to highlight the six typical phases.

1. Targeting: "Identifying a vulnerable individual. By definition all children are vulnerable. Our brains are fully developed at ≈24."

By putting a name to and learning about each of the stages of psychological control, we become stronger as survivors and as a community.

Education is the best means of prevention. Understanding combats victim-blaming attitudes, stigma and shame. Conversation is the first step.

2. Gaining trust: "By engaging them in seemingly harmless conversation, abusers lull children into a false sense of safety."

To gain my trust, the serial paedophile who abused me promised to help me recover from anorexia, and confided his own ‘battles’.

Every survivor story matters. Lived experience informs change by illuminating the true extent of the evil and personalising the otherwise unrelatable.

3. Filling a need: "Once they’ve conditioned them to open up, perpetrators can identify gaps in their target’s emotional support and assume the role that fills those gaps."

Whilst it’s important to listen to survivors, we must remember that it’s not the responsibility of those who’ve suffered to fix a problem they didn’t create.

Child sexual abuse affects us all. It therefore requires a suite of solutions and an ongoing collaborative approach.

4. Isolating: "After they’ve forged a bond, perpetrators begin slowly dissolving their target’s true support networks by discrediting, mocking, and discouraging contact with others."

I remember the feeling of loneliness distinctly. The paedophile degraded my then pregnant mother, saying she was “full of hormones”. He also ridiculed staff and students, and undermined my relationship with my father. I became untethered to both my loved ones and sense of self.

Knowing I liked art, in the first talk I had with my abuser, he asked if I’d ever drawn myself naked.

He also made me watch films that glorified relationships with significant age gaps. One film ended on the line “Give me a girl at an impressionable age and she’s mine for life”.

6. Maintaining control: "Perpetrators do this by striking a perfect balance between causing pain and providing relief from it."

No amount of contrived care can negate deliberate evil. Just because someone is nice to you when it’s convenient, doesn’t mean you owe them anything.

This applies to both survivors and bystanders. We must all be wary of those who weaponise our collective willingness to forgive.

These behaviours are, in Tame's view, the biggest gap in Australians' understanding of sexual abuse.

She believes that's largely because most media attention is afforded to the assault itself.

"The visual imagery that gets ignited by words like 'rape' and 'molestation' make for the best headlines and grab people in. But most child exploitation is invisible, it's immeasurable, and it's untraceable. And therefore simultaneously the hardest thing for a child to explain let alone prove, and the easiest thing for perpetrators to deny," she said.

The sheer horror of it also plays a role.

"The culture of disbelief actually comes from a good place. It comes from the fact that most people in society have a conscience, and so this level of cruelty, of calculated and premeditated evil, is unfathomable," she said.

But putting aside our discomfort and confronting the issue, learning about it, understanding it, is a critical tool of primary prevention. She's previously urged educational institutions, for example, to find age-appropriate ways to communicate the signs of grooming to children along with ways to report such behaviours.

Tame stresses that it's not about making children or survivors or bystanders responsible for preventing these crimes; it's about recognising that our collective ignorance is what allows them to flourish.

"Perpetrators draw strength from our ignorance, our confusion and our disconnection. I want to take that power away from them and give them back to survivors and bystanders and family members and people who are whistleblowers. Because this affects all of us, either directly or indirectly."

If you have experienced sexual abuse and need to speak to someone, support is available. Call Lifeline on 13 11 14.

Reply
Upvote
Grace sums up the modus operandi of a pedophile  via her tweet messages this one captured my attention - "I remember the feeling of loneliness distinctly. The paedophile degraded my then pregnant mother, saying she was “full of hormones”. He also ridiculed staff and students, and undermined my relationship with my father. I became untethered to both my loved ones and sense of self." Grace Tame - I do believe they target vulnerable children and drive a wedge between them and their parent/s.  Particularly true if the perpetrator is a step parent - it's their way of keeping their vile actions secret.
C
ceecee 3 months ago

Reply
Upvote
Thank you Grace for your advocacy. You speaking out was one of the catalysts for me finally speaking about my own abuse and making the big leap to reporting it to police after years of silence. Your words in the article and when I’ve heard you speak in interviews about the stages of grooming ring so true and the grooming is such a damaging part of the abuse that is so rarely highlighted. ✊
News
General
Opinion
True Crime
Politics
Sport
Explainer
Entertainment
Celebrity
Reality TV
Movies
TV
Books
Rogue
Royal
Lifestyle
Beauty
Fashion
Weddings
Home
Wellness
Health
Fitness
Travel
Food
Parents
Before The Bump
Pregnancy
Baby
Kids
Teens
School
Parent Opinion
Work & Money
Money
Finance
Career
Lady Startup
Relationships
Sex
Dating
Separation
Friendship
Family
Real Life
Couples