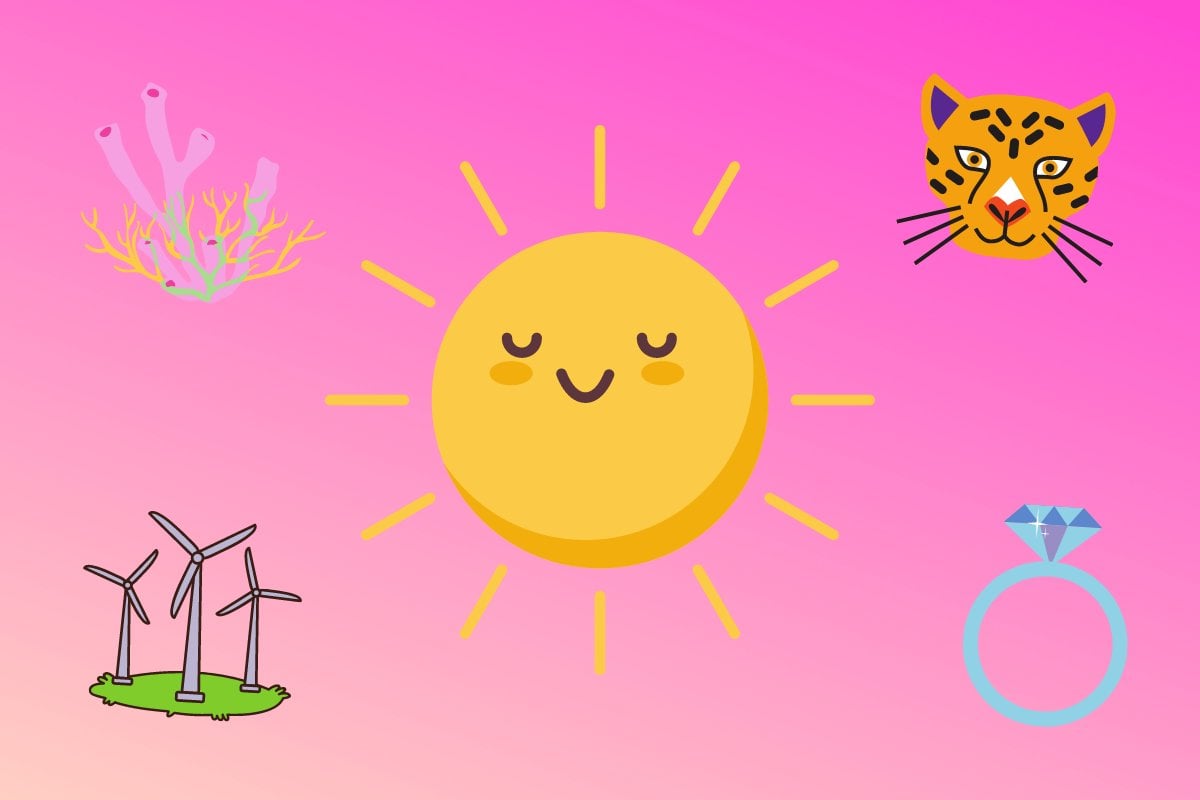 The most dominant headlines of the year have involved serious allegations against politicians and staffers in Canberra, extreme weather events, mice plagues and, of course, that goddamn pandemic.

Here are the stories we need to hear (and yes, most of them are animal related):

1. A six-year-old Australian Koolie named Bear won an award from the International Fund for Animal Welfare (IFAW) for his saving more than 100 koalas during Australia's devastating 2019–2020 bushfire season.

A post shared by Bear The Koala Detection Dog (@bearthekoaladog)

3. On November 23, billions of coral babies were born on the Great Barrier Reef. Marine biologist Gareth Phillips said this was "a strong demonstration that its ecological functions are intact and working after being in a recovery phase for more than 18 months. The reef has gone through its own troubles like we all have, but it can still respond – and that gives us hope."

The Great Barrier Reef has "given birth" in its annual coral spawn https://t.co/7q5eCDuXNd pic.twitter.com/Ov3HEoMtaE

4. A Boston hospital has begun a Phase I clinical trial for a nasal vaccine that aims to prevent and slow the progression of Alzheimer's disease.

5. In its most recent budget, the Irish government announced a world-first pilot program ensuring a nationwide basic income scheme for artists and arts workers, guaranteeing around 2000 creative workers income from March/April 2022.

6. In November, an elderly Victorian couple visited a Toyworld store in Bendigo, Victoria and paid off 82 lay-bys for complete strangers.

7. The future of a penguin colony on Granite Island in South Australia is looking brighter after the discovery of two new breeding pairs, bringing the population up to 20 up from its lowest-ever count of 16 penguins in 2020.

8. Los Angeles officially became a 'no-kill' city in February, meaning more than 90 per cent of animals in shelters are rescued.

9. In the UK, a collapsed walker was saved thanks to his two dogs. When the 71-year-old collapsed, his black labrador ran ahead to find a walker they'd passed earlier. She followed the dog back to find the other dog, a golden retriever, standing guard by its unconscious owner's side. She then raised the alarm and a rescue team was sent out.

10. In February, French nun Lucile Randon became the oldest person to recover from COVID-19, just in time for her 117th birthday.

11. The Bank of England revealed new £50 notes in March, featuring mathematician and codebreaker Alan Turing. Turing's work to decipher Enigma machine messages during World War II saved countless lives and helped bring the war to an end sooner, but after the war he was persecuted and convicted of gross indecency because he was a gay man.

12. Tasmanian devils are thriving on the Australian mainland for the first time in 3000 years. Dozens of devils were introduced to a 400-hectare sanctuary in New South Wales last year, and this spring, the first generation of joeys were born.

13. The area of marine protection around the Galápagos Islands has been increased by nearly 60,000 square kilometres and established a 'marine highway' refuge along to migration path of animals including scalloped hammerhead sharks, whale sharks, rays, sea turtles, and tuna.

Congratulations to Ecuadorian President @LassoGuillermo on the creation of a new 23,166-square-mile Marine Protected Area near the Galápagos and the new debt swap to help manage it, announced today at #COP26. (📷: @shawnheinrichs) pic.twitter.com/Uj1vzJN2RE

A zookeeper gave this baby otter a sock to keep warm. She later turned it into a onesie with holes for the hands, feet, and tail! pic.twitter.com/b8EH2V6lmm

15. New Zealander rally driver Emma Gilmour was named the first female to race as a factory driver for McLaren Racing, securing a full-time drive in Extreme E – a global championship that tackles climate change and gender diversity during its all-electric SUVs off-road series.

16. Fort Severn, Ontario Canada's northernmost First Nations community, reduced its consumption of fuel for both electricity and transportation by around 400,000 litres of diesel a year after switching on a 300 kilowatt solar power station.

17. 800,000 native honeybees, which some thought to be extinct, have been found in an ancient oak forest in Oxfordshire, England.

18. Researchers in Auckland and Germany have developed a new way to fight climate change. The scientists potty-trained cows by using a sweet treat to coax the cows to push through a gate and urinate in a special pen called MooLoo, making their nitrogen-rich urine easier to collect and process.

19. An English nine-year-old called Sean has developed an app to help his non-verbal six-year-old brother Adam communicate. It displays a soundboard with pictures on its buttons which play related questions and statements. Adam can now tell others the basics of what he might like to do in a day.

20. An Italian street artist has replaced fascist symbols and sentiments in a Verona tunnel into tasty looking art.

‘I take care of my city by replacing symbols of hate with delicious things to eat,’ says Pier Paolo Spinazze aka 'Cibo,' an Italian street artist who fights racism by turning fascist graffiti into colorful food murals https://t.co/L0nzwBSRuN pic.twitter.com/a2MfIpl4bU

21. Astronauts can now use chillies grown in space to spice up their meals in zero gravity. The chilli peppers are the first to be grown in space and were harvested as part of Nasa's plant habitat programme.

22. Sand, one of the most accessible and abundant 'toys' in the world, has been inducted into the US National Toy Hall of Fame.

23. American bride Kelly Anne combined a variety of fabrics in her custom-made wedding dress so her groom Anthony Ferraro, who is blind, could "see" her through touch.

"My mind was blown. I started crying. And it was just like – was able to see Kelly. That was the best part, I was able to feel her dress." Anthony said.

24. US woman Julia Hawkins set a new world record in the 100-metre race at the Louisiana Senior Games. The 105-year-old recorded a time of 1:02:95, making her the first female and American to run the event in her age group.

25. While many countries ban shark-finning in their waters, the United Kingdom has become the first country to ban the import and export of shark fins and any products containing them, including shark fin soup.

26. Serbia's men's national football team donated its one million Euro (AU$1.58m) payment for qualifying for the 2022 World Cup to the treatment of sick children in their country.

27. Mexico became the first country in North America to pass a ban on testing cosmetics on animals.

28. The 2021 Tokyo Olympics had the greatest LGBTQI+ representation of any games, with 168 openly Queer athletes - more than double the 2016 count - representing 27 countries in 26 sports.

29. Swiss city Basel has made green roofs compulsory, requiring all new and retrofitted buildings with flat roofs to add green space as part of its biodiversity strategy. So far, more than one million metres of green roofs have been constructed.

💚The Swiss city Basel is the first city in the world to make green spaces (#greenroofs, #greenwalls) a legal requirement on new buildings!

30. In early May 2021, Pandora, one of the world's largest jewellery companies, announced it would phase out mined diamonds in favour of more sustainable, lab-created gems.

31. Gold Coast students struggling with mental health have found the introduction of a cocker spaniel therapy puppy named Luna "life changing", with the principal reporting attendance of students is up, and teachers sayinh that lessons are quieter and better behaved since her introduction.

32. Jaguars are one of the most threatened carnivore species in the Americas, but a new study shows the population increased from 4025 in 2010 to 4766 in 2018, thanks to Mexican conservation efforts.

33. 21-year-old Jeremiah Thoronka, from Sierra Leone, won the inaugural Global Student Prize in 2021 for his invention which delivers electricity to homes without the need of a battery, wind, sun or water. Using kinetic energy from cars and pedestrians passing over roadways, the machine currently delivers power to 150 small homes.

34. Portugal shut down its last remaining coal plant, ending the country's use of fossil fuel nine years ahead of its 2030 target.

35. Scientists in Germany believe they have found a way to turn popcorn into home insulation boards, which they claim have "excellent thermal insulation properties and good protection against fire" and is much more eco-friendly than most current insulation options, which are made by using fossil fuels.

36. In November, Botswana's Court of Appeal upheld a 2019 ruling that decriminalised gay sex, stating that the criminalisation of consensual same-sex activities violated the constitutional rights of lesbians, gays, bisexuals and transgender persons to dignity, liberty, privacy and equality. The LGBTQI+ community in Botswana has described the decision as establishing the country as a "true democracy".

37. A yellow-eyed penguin named Chrystal has been admitted to Dunedin Wildlife Hospital in New Zealand three times following three separate shark attacks in 2017, 2018 and 2019. Miraculously, she survived them all and in November 2021 became a mother to two chicks, Ruby and Sapphire.

38. With the world facing a maple syrup shortage, the government-sanctioned Federation of Quebec Maple Syrup Producers announced it was releasing more than 22,000 tonnes of its strategic maple syrup reserves - about half of the total stockpile - to help keep up with demand.

39. A new laboratory-stage mRNA vaccine that teaches the immune system to recognise the saliva from tick bites could prevent these bugs from feeding on and transmitting tick-borne diseases to people, US scientists say.

40. On November 27, 36,109 people turned out at Stadium Australia to break the attendance record for a Matildas match on home soil.