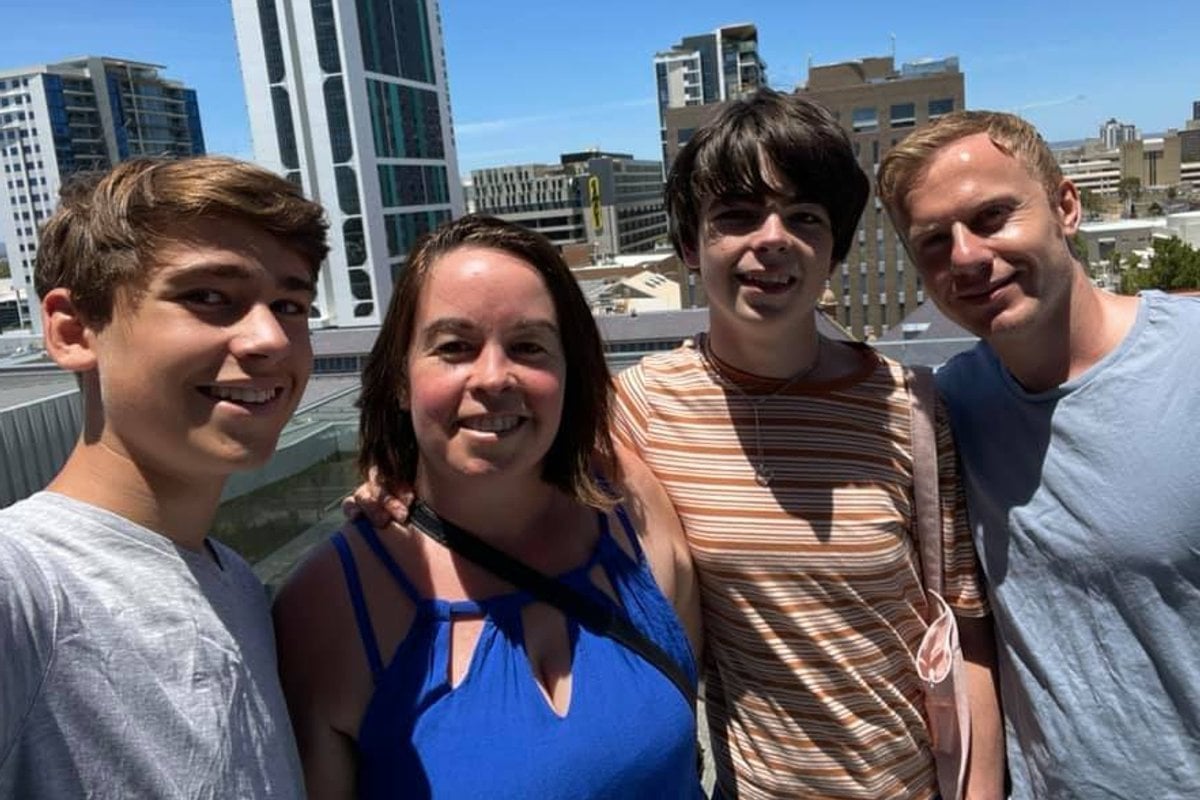 Mamamia’s Five Golden Rules series takes a pervy look into the lives of Australian families. From parents of toddlers to parents of teenagers, the series asks parents to share their golden parenting rules, including the rules for their kids, and rules to just get through each day.

This week, a 49-year-old mother-of-two shares her Five Golden Rules for parenting teenagers.

Libby, her husband, and their two teenagers live just outside of Fremantle in Western Australia.

She has a 16-year-old "utterly loveable" trans daughter and a 14-year-old son who is a "sports superstar" and "total overachiever" at school.

Libby’s parenting philosophy is one where she tries as much as possible (without over sharing) to be honest and vulnerable with her kids and model for them what it is to be a resilient, positive, heart-driven human.

The two types of parents during school shopping. Post continues below.

"Not that I am minimising being a mum, it is the greatest and most important thing I have ever done. But it is only one of the things I am," Libby shared.

"Long before I met them, and long after they leave the nest, I was, and I am... an adventurer and a traveller; a writer, editor, speechwriter, researcher; a diplomat; a poet; a funny bugger from a long line of funny buggers; a music lover and music maker," she told Mamamia.

With all this in mind, here are Libby's Five Golden Rules for her family.

1. Under promise, over deliver.

"Don't make a commitment to your child that you can't keep. There will be many people in their lives who break their trust, but that should not be you. Only commit to what you know is truly possible and follow through. Every time. They will hear the words you say, but if you back it up with the right action, they will come to know that you mean what you say and you say what you mean.

"It also saves you from guilt-based parenting where you stretch yourself emotionally and financially to try to give them EVERYTHING. There is a saying that when the gods want to punish you, they answer your prayers. Your children learn nothing by being given everything they want or need (and things they never asked for). Life has struggle, and there is value in creating a goal, working and saving towards it, and achieving it. Don't deny them this opportunity to develop grit and perseverance."

2. Be consistent and be persistent.

"I'm no expert on discipline. But I know you have to pick your battles. Decide which standards are important to you. For me, it was good manners. Manners teach children about respect, empathy, and how to be in the world.

"You will not win every battle. You will not train them out of every bad habit. Pick which ones you can live with and which ones you can look past. No one ever died of a messy room. Let them have a space of their own where they can express themselves, even if (especially if) it is not your taste, or your style, or your standard. They are little chemists, doing alchemy, creating something wonderful in those messy rooms. They are making... themselves. Creativity needs space and privacy."

"Parenting has changed from a noun (a thing - a person - a parent) into a verb. Parenting. You are already a parent by having a child. You did it. The greatest gift you can give your child is to have the most fun you can, both with them, and away from them. Fill up your own cup. Let them see you dance, sing, and be a goof. Do work that you find rewarding and take action in your local community. But most importantly, have fun. Have fun with them.

"Not sure how to do that? Do you what you enjoy and invite them to join you, and ask them the same. My son recently developed a passion for golf and I originally thought that would never be me. But on a recent holiday, we went to a driving range. I faced my negative self-talk about how I have no hand-eye coordination and I just showed up and did it. It was important to him I tried. I detached my ego and hit the damn ball and I didn't care if it went 100 feet or 10, or if I swung and missed altogether. Because that is not my value. Me showing an interest in my child and connecting with him, that's what's important." 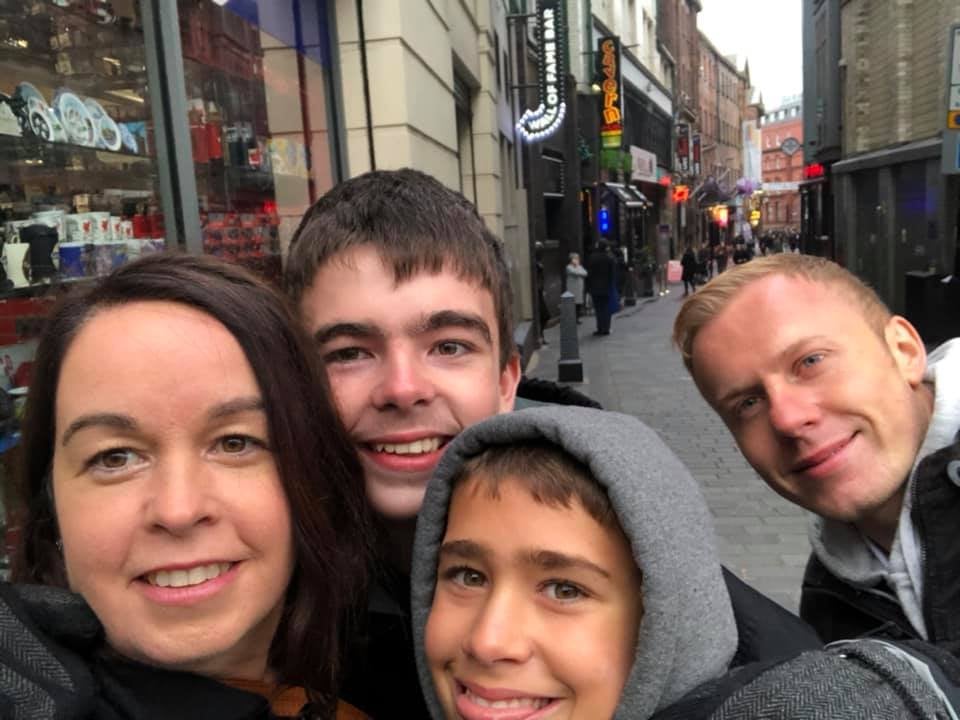 "One powerful thing I did once my first husband left was to consult my children about all important decisions. Where we live. Where they go to school. How we spend our holidays. Where we go when we go out. We are a squad. They are not accessories that tag along with me. If I want them to help me, to lift, to strive, we need common goals, common interests and a shared future. You might not always agree and they might not always get their choice, but they feel heard, they learn to take turns, and to share."

"There are few guarantees in life, but you will screw up as a parent. It may be through repeating bad patterns you learned as a child, or driven by tiredness, boredom, impatience, envy, or overwhelm. Either way, you will catch yourself saying and doing things you regret. When this happens, you can guilt yourself or try to do better, but what you can do that will actually make a difference is to apologise to your child. This is bloody powerful. Explain what happened and why. Take responsibility. Promise to try to do better. Never underestimate the power of your child's forgiveness. It's magic.

"Your kids don't need you to be perfect. It's actually not good for them to create a false idol of perfection or the stress you put yourself under to create that illusion. They don't need you to hide your feelings or failures. Quite the opposite. They need to see you try. Struggle. Fail. Get up. Do it again. Learn from it, and laugh about it later.

If you're hurting, don't hide it. In recent years, I lost my darling Dad and my best friend (not long after I lost my relationship with their father). At first, I white-knuckled it. I did a lot of crying in the shower. I was trying to be strong for them and for myself, to create an impression that I was okay, and they were okay.

"Your kids will not fall apart if they see you are upset. They will observe a real person experiencing normal emotional life. Yes, we get sad sometimes. Or frustrated. Or joyful. Feel all the feels and show them what it means to have a wide emotional vocabulary. Create a safe space where they can feel things and the skills to be compassionate to others who are having 'a moment'."