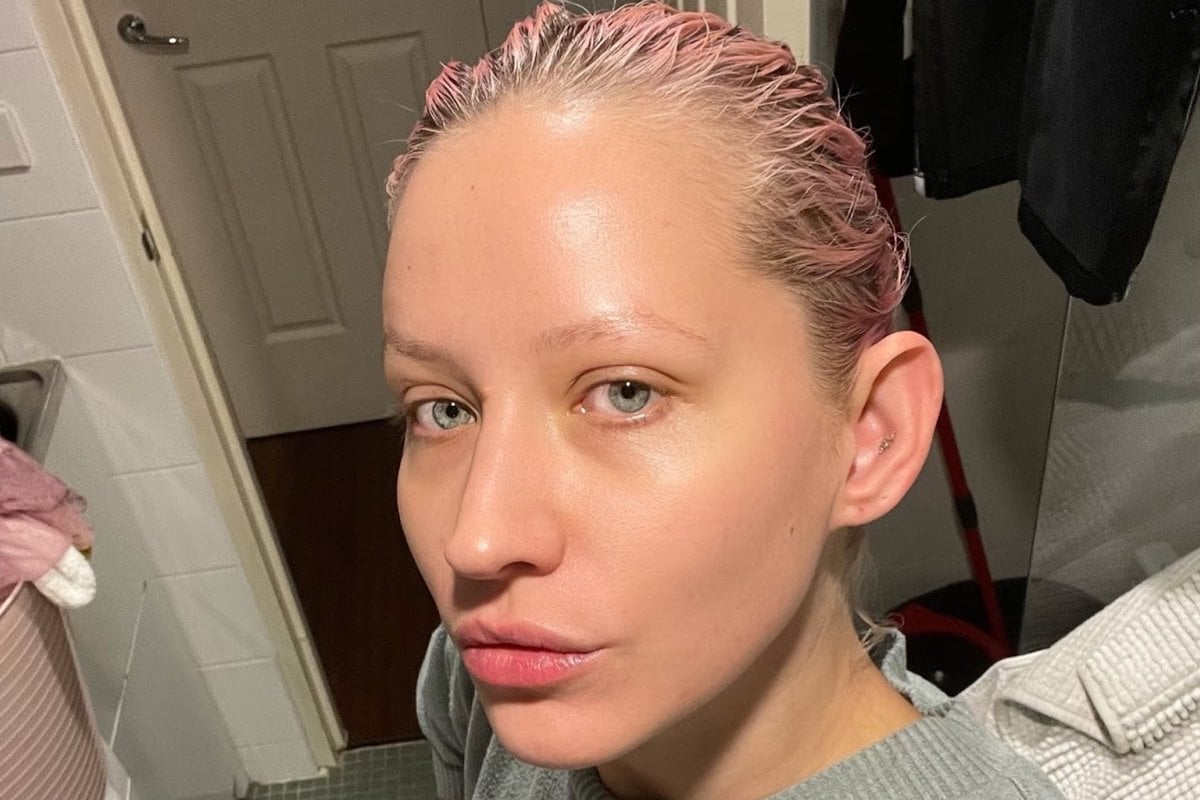 I don’t mean to brag (well, actually, I do…) but I have been refused alcohol at two separate BWS stores this week. And no, not because I was already too wasted - but rather because neither of the cashiers believed I was “over 25”.

This is both a glorious and absolutely rotten thing to happen. Obviously, as a mother to two children who hasn’t carried ID for well over a decade, I am nothing short of thrilled.

But at the same time - as a mother to two children who hasn’t carried ID for well over a decade, I actually really need that wine.

Watch: Is lube really the secret to glowy skin? We put the TikTok trend to the test. Post continues below.

With the cashier not even in the slightest bit interested in my generous offer of casting their eyes over a picture of me with my crotch goblins in order to PROVE I was ‘of age’, I left the bottle shop wine-less.

Now, I dunno about you, but sometimes it’s hard to gauge the efficacy of a skincare routine or product. I mean, we see our own faces every damn day.

Improvements to tone, clarity and texture are gradual, subtle… downright sneaky, actually. The way they accumulate over time, while we conveniently forget how we used to look.

And it got me thinking about how for the first time in AGES I had actually been loyal to the same routine. And that perhaps it was this magical melting pot of products that had been the smoking gun to this irregular, forced (v. temporary) sobriety?

As a beauty writer, I’m much like a little lab-rat. I’m regularly sent products that are not even available yet, in little tubes, with 'lab sample' stickers slapped onto the side. I will gleefully put anything on my face so I can write about them.

So when I find my skin looking particularly glowy, extra clear and super glass-y, it’s my job, nay - my duty! - to tell you about it.

So here are the products that I’ve been LOVING and a photo to prove they pull their weight. It’s a s**t photo of everything except my skin, ok? Ignore Mount Washmore. Forget the discarded baby sock. Avert thine eyes from my wet, pink home-dyed hair. 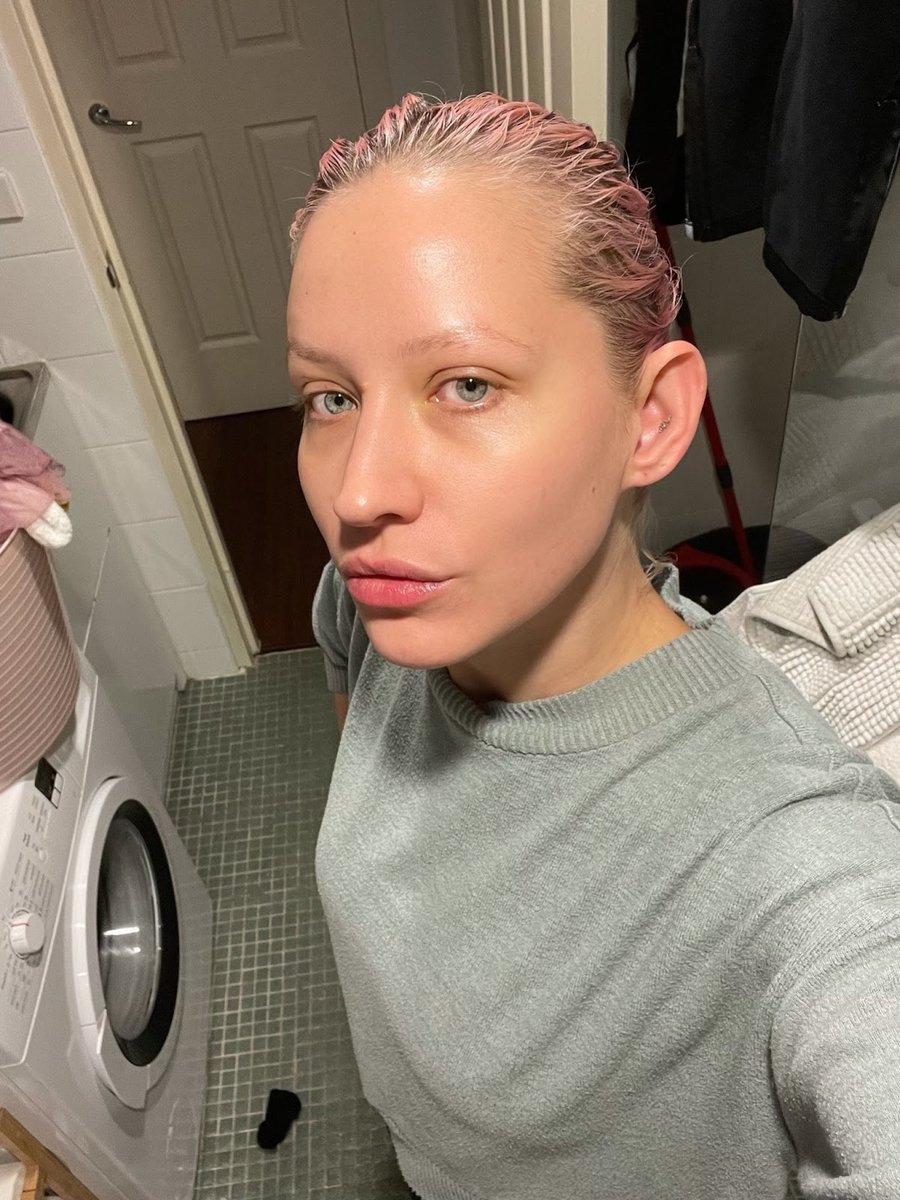 Honestly, it is a CRIME that we’ve been in lockdown for months and no one has seen me.

Don’t get me wrong, give it a hot minute and I’ll have stuffed it up again - I’ll over-exfoliate or get all promiscuous with my actives and there WILL be trouble.

But for now, I feel like I’ve unlocked the “glass skin” level that I’ve heard people talking about, and I HAVE to share. 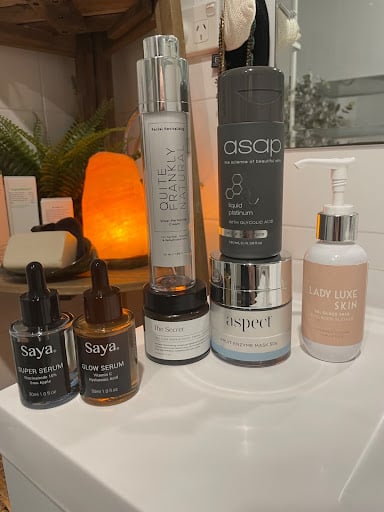 I use a gentle cream cleanser and a splash of cool water to ‘wake’ my face up.

I then spritz my skin with a thermal water - I’m loyal to no brand here, I will use either La Roche Posay Thermal Spring Water, $9.99, or Avène Eau Thermale Spring Water, $11.99 - whatever is on special at the time.

Then, while my skin is still damp, I apply Saya Skincare’s Super Serum, $90.

I’ve raved about this in articles gone by and I can’t see myself stopping soon. I recently shook the last few drops out of this bottle and I was DEVO I hadn’t reordered in time.

This is my favourite serum; containing ingredients such as niacinamide, hyaluronic acid, and B-vitamin complex, it is plump and bouncy skin in a bottle.

Immediately after, I use another Saya superstar, the Glow Serum, $90, which is a potent antioxidant / hydration blend. With ingredients like hyaluronic acid, Kakadu plum and caviar lime, this is instantly brightening, and over time diminishes dark spots, pigmentation, fine lines, and wrinkles.

Unlike some vitamin C serums, it absorbs readily and without stickiness.

Next, I put a pump of the Lady Luxe Beauty Glass Skin Collagen Slather, $65, which as the name suggests, is glass skin you can literally dispense via pump! 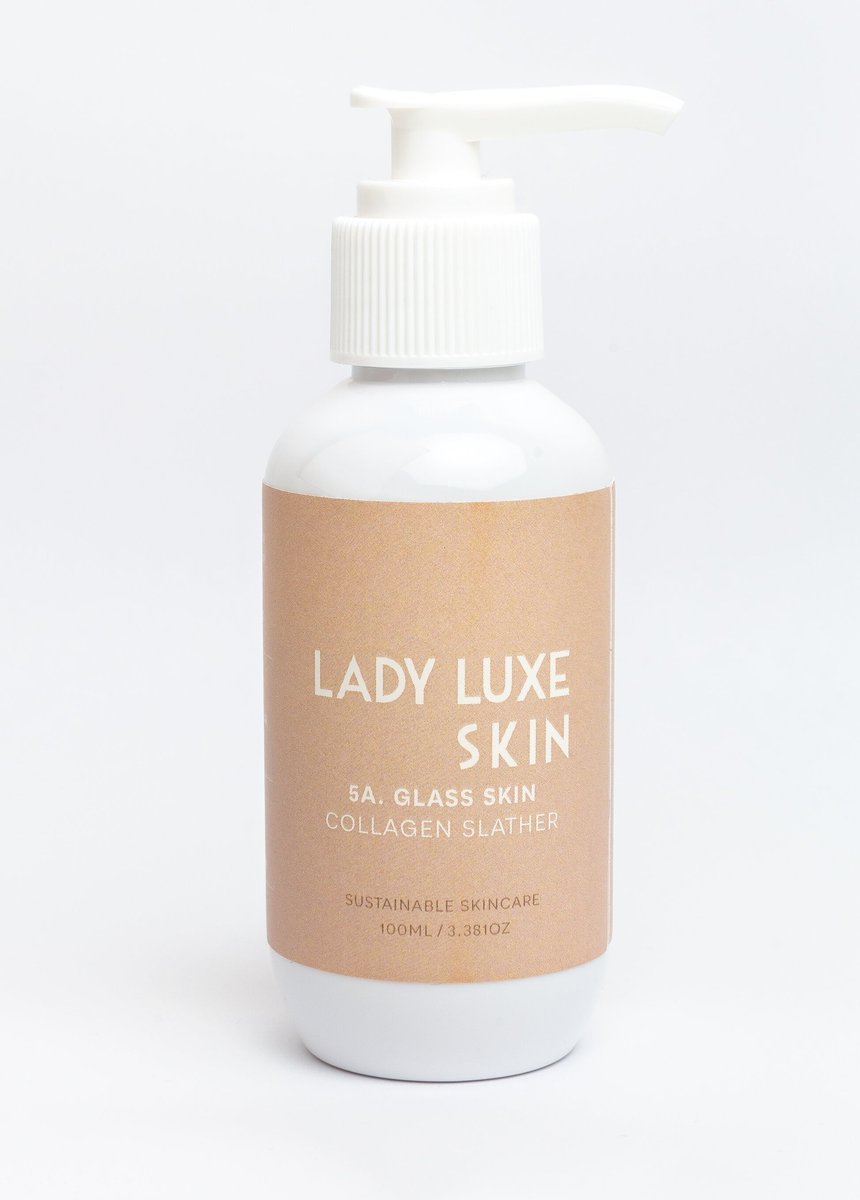 Final step for the morning routine (well, not final final - that’s SPF, obvs!) is the Quite Frankly Natural Silver Perfecting Cream, $72, and LET ME TELL YOU it has taken me YEARS to find this - the perfect moisturiser.

A post shared by Quite Frankly Natural ®️ (@quitefranklynatural)

I have been through hundreds and hated them all. I have a real issue with moisturiser. It always feels gross on my face, it either soaks in completely leaving ya girl still thirsty, or it just sits there like a disgusting greasy slick. I was starting to think my ideal middle man simply didn’t exist.

I don’t know what sorcery this is, but this cream is super light yet incredibly nourishing. It’s absolute besties with my skin - formulated with pure colloidal silver water for its healing, antibacterial properties, along with B5, Kakadu plum, argan, jojoba, and rosehip oils, plus native pepper berry extract. This right here is my guy.

If I’ve worn makeup or SPF, a double cleanse at night is my jam. The first cleanse is always oil-based, but I’m not going to recommend a specific one because I honestly think they’re much of a muchness.

I like to keep it simple with straight Jojoba, but whatever your budget, whatever brand and oil you prefer, they all get the job done. For the second cleanse, I go cream or gel - just use whatever is best suited to your skin type.

After cleansing I pat dry and apply a layer of the aforementioned Lady Luxe Beauty Glass Skin Collagen Slather to give myself a nice, juicy hydrated base.

Then I whip out the big guns…

A post shared by THE SECRET- BESPOKE SKINCARE (@the_secret_skincare)

Not so ‘secret’ anymore - I have been trialling 'The Secret' bespoke prescription Cellular Repair Night Cream ($220) for the last three months.

It’s a retinoid cream, formulated specifically for sensitive skin, with ingredients that help to relieve irritation and reduce some of the common side effects.

I’m no stranger to adjusting to a retinoid. I’ve done it the right way, the wrong way, and now - the custom way. And though it's significantly more costly than a plain tube of retinoid from the chemist, I’m SOLD.

I don’t know if it’s because I’ve 'retinized' before, or if it’s the inclusion of anti-irritating ingredients that eased the transition, but this was the most pleasant introduction to vitamin A I’ve ever had!

The first few weeks my skin was SO GODDAMN DRY, but that’s normal and manageable. I had a little peeling (this is where the Aspect Fruit Enzyme Mask, $62, comes in) but other than that, it was fine. I didn’t know beauty could be so painless.

I'm not gonna lie - I baulked at the $220 price tag, but after doing some calculations, it works out to $55 a month for a huge 50g jar which you just replace when it runs out or expires. I also like the fact that it isn’t a subscription, and that there’s enough product that I can take it to the tits! Because remember: Your face stops at your boobs.

I have worked up to using the cellular repair cream every other night now, and on my ‘off’ nights I use asap Liquid Platinum, $50.70, followed by the Quite Frankly Natural Silver Perfecting Cream, $72.

I FRICKIN LOVE LIQUID PLATINUM. I use it every second night as a serum - I pump it out straight onto my fingers and use it as the first step in my regime after cleansing.

I then pile the rest of my products on top, and overnight it magically regenerates my whole damn face leaving my skin clear, bright and dewy.

I really think with this routine I’ve nailed it and will be sad to pack these guys away when it’s time to trial something new.

They're absolute staples on my beauty shelves, though - I WILL be going back!

Have you tried any of these products before? What was your experience? Share with us in the comment section below.

K
kattucker a month ago

Reply
Upvote
Don’t you carry your driving license with you?
M
mamamia-user-197644376 a month ago

Reply
Upvote
2 upvotes
Not sure how regular people can afford all these expensive products?? I know this person is a beauty writer so her job depends on it…but otherwise I would really like to know if other middle income earners with a mortgage and children buy all this sort of stuff?

Reply
Upvote
2 upvotes
@mamamia-user-197644376 there's no way in hell I can afford some of these products, and even if I could, I still don't think I could bring myself to pay those prices. I mostly just look at what the active ingredients are, and try to find less expensive versions.
M
mamamia-user-482898552 a month ago