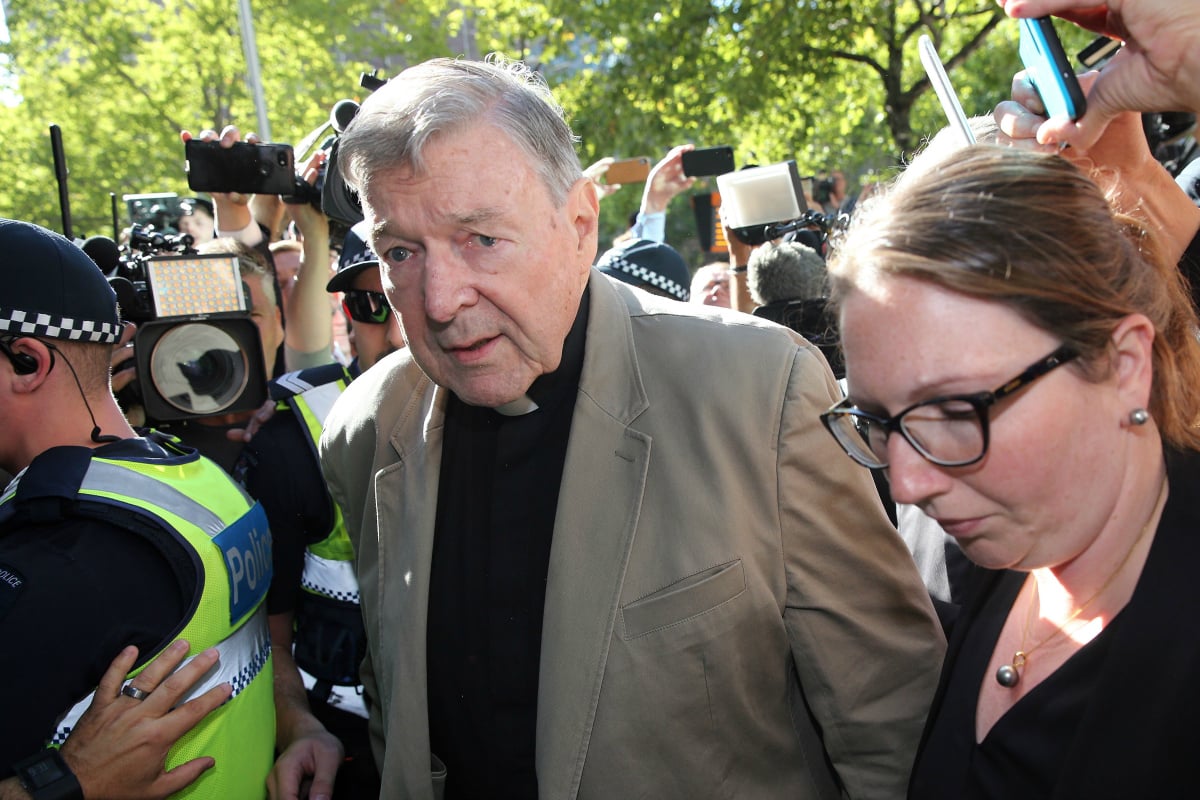 My Catholicism died the day George Pell was convicted.

Will it be resurrected if his appeal is upheld this week?

Pell didn’t kill my faith, but his trial was the virus that finished it off. To be honest, it had been unwell for some time.

I’d been dragging it to mass for Christmas and Easter for years, telling myself it was fine, that seeing familiar faces and singing a few favourite hymns would perk it up.

Clearly I wasn’t the only one feeling that way. Congregation numbers have been falling for years. The news was full of paedophile priests and systematic cover-ups. But we told ourselves, it was only a few bad apples… don’t tar all religious with the same brush… look around at the people you know, consider the good they do.

I wanted to see myself as loyal, not the sort who bolts as soon as things got tough. I told myself the church is like an extended family – and you wouldn’t bail out on your family because of a creepy uncle would you? What’s going to happen if all the decent people leave? Remember the happy baptisms, the beautiful church weddings. I liked to remember the laughs I had at school – the ridiculousness of glow-in-the-dark rosary beads, my first holy communion when the host stuck to the roof of my mouth, the argument I had with Sister Rita when she declared ‘Cher’ was not an acceptable confirmation name. How we couldn’t buy hot dogs at the tuckshop during Lent but we were offered a fish finger in a bun instead; ‘fishdogs,’ we called them. Hilarious.

On Saints’ Day we performed ‘liturgical dances’ with meaningful moves, and we made up sins to shock the priest at confession. We knew it was all silly, that none of it made sense, it was a joke we were all in on.

As an adult, I referred to myself as a ‘cherry picker’ Catholic. I embraced the parts I liked (the holidays) and rejected the bits I didn’t (Vatican teachings on birth control, homosexuality, women clergy).

But I know I did, because when I wasn’t laughing, I was dead scared.

I believed that God was keeping tabs on what I was doing, seeing and thinking. Even as I giggled through a liturgical dance I felt sure that one day, maybe 50 years down the track, I’d be punished for my disrespect, so the laughter was never free. And divine punishment was random – it didn’t have to fit the crime. Let’s say you nick a dollar from your dad’s change jar, three days or three years later God might make you fall over and scrape your knee or he might have your mum killed in a car crash. You just never knew.

The only way out of that angst was to get to confession and maybe cop a few Hail Marys and hope (pray) that would cancel out a few sins, hopefully.

Even now, at age 51, I have to tell myself that my car being scraped in the Coles car park isn’t punishment for putting Lady Finger bananas through the assisted checkout as Cavendish.

Writing this, a tiny part of me is worried what might happen because I’m not using a capital C for ‘church’.

That’s messed up, but I got off lightly.

Damaged kids grew into tortured adults because the stories we were told weren’t stories at all. They were blatant, dangerous lies.

Good people are rewarded and bad ones are punished? Lie.

Whether it was priests, Pell or the pope himself telling the lies, the whole institution defended the liars.

Lisa Flynn on the abuse, the fallout and jailing of a giant. Post continues after audio.

And I can’t unscramble that egg.

People say, ‘Don’t confuse the church with faith!’ but Catholicism is Rome and Rome is Catholicism. I could shop around for another brand of Christianity but I can’t see why I need any brand of religion at all. Looking around, the atheists I know seem pretty bloody happy.

Since the Pell verdict, I’ve been trying godlessness on for size and I have to say it feels pretty good.

For the first time in my life, I didn’t go to mass over Easter and still had a lovely day.

I went to Europe and lit candles in cathedrals because it’s a pretty custom, like tossing coins into a fountain.

I visited synagogues without feeling I was cheating on my own church.

It’s a slightly lonely feeling, this new atheism, but it’s freer and happier.

I’m a little sad to think the church is happy to let me (and who knows how many others) quietly drift away. It’s not fighting to keep me, that must mean I’m of little value?

One thing I’m not is angry. And I’d never criticise or question anyone who believes – that includes much of my family and a whole bunch of friends. I respect their faith and I hope they’ll respect my lack of it.

My Catholicism is something that’s in my past, not my present, like school.

I’m not boycotting anything or rejecting anyone. I’ll celebrate at church weddings and mourn at requiem masses (but I won’t take communion). If my kids want to go to mass at Christmas because that’s what we’ve always done, of course I’ll go.

If Pell’s conviction is overturned, I won’t be protesting on the court steps or even at my keyboard. Our justice system works the way it works and I have more faith in it than I do in Pell’s church.

I hope, if he’s freed, Pell flies back to Rome quickly and quietly to live out his days, no doubt in luxury. His state of mind and the condition of his soul are (to use his words) of little interest to me. I’ll be thinking about the people who were brave enough to speak out and those still suffering in silence.

What we have to realise is although the churches were fuller in years past, I would say that a lot of people went to church as it was seen as a societal expectation and considered an advantage when applying for employment.Of course we for get that some companies were known for hiring protestants and some for hiring Catholics.Also there was that strict divide between Catholicism and Protestantism.eith families being torn apart thought mixed religious marriages

I’m certain that if children weren’t brainwashed with it as children, and were able to intellectualise their choice as adults, the church would have died out long ago. Clever them for instilling themselves so heavily in the minds of our young and now our school system. They are great at PR and marketing, which makes them all the more insidious.

The Year 6's at our school are being confirmed as Catholics tonight, at 12 years old. Bizarre really...

Is it a Catholic school?