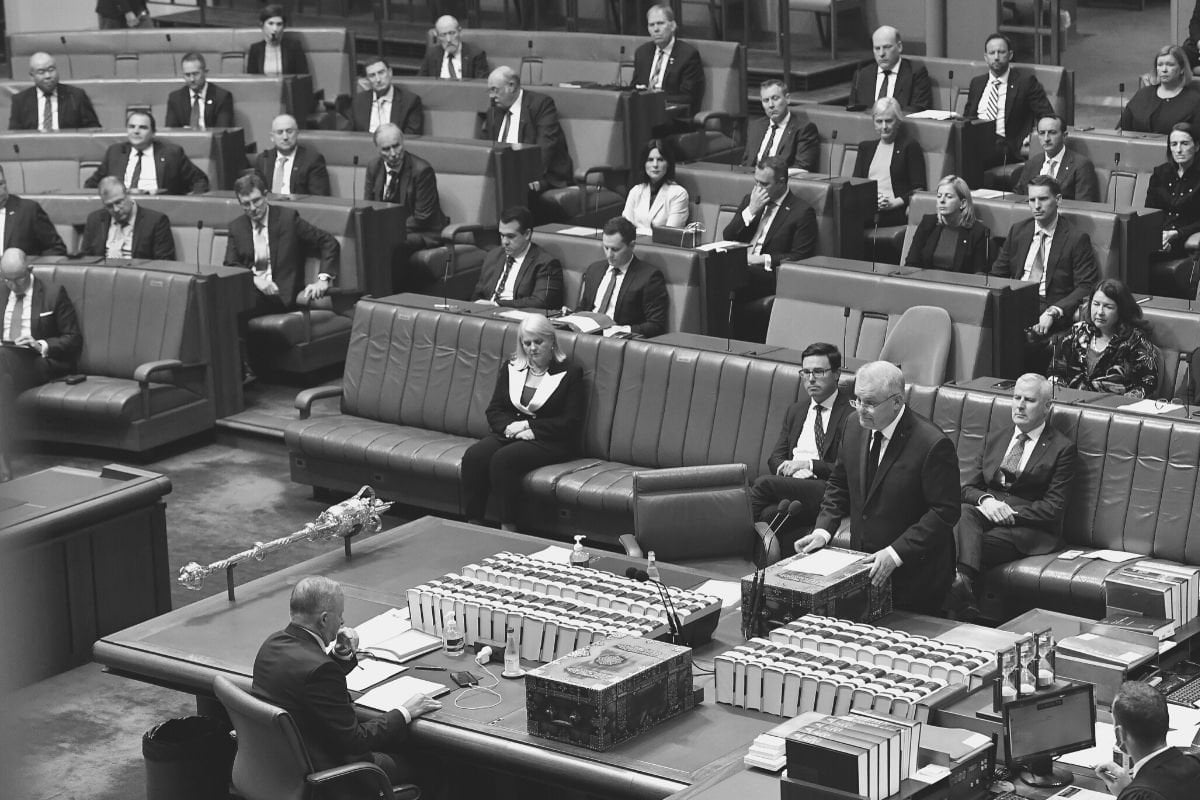 He demanded the "madness" end. He was referring to restrictions and lockdowns, not COVID-19.

He said that masks don't work. Neither do lockdowns.

He referred to our medical experts as "dictatorial" and referred to the virus as "just like the flu."

Everyone is entitled to freedom of speech. But what Christensen displayed yesterday in Parliament undermined everything our Government is trying to accomplish as they tackle the virulent Delta strain. It undermined the long hours our doctors and nurses are pulling in COVID-wards. It was highly offensive to the families right now mourning loved ones who've passed away. And it was a slap in the face to the millions of Australians sacrificing their lives to stay locked inside their homes, because it fed into conspiracy theories and the protests that threaten to undo our hard work.

Scott Morrison is under pressure to discipline another government MP, this time George Christensen, for spreading conspiracy theories and misinformation about coronavirus.https://t.co/2jWa5NtgZk

Most of what he said was, in fact, scientifically untrue. Lockdowns and masks are stopping the spread, and as for that survivability rate - it's truly mind-blowing that this argument is still being used. Do people not understand that while it might look like a small percentage, on a large population, that ends up being the unnecessary deaths of a very, very large number of people?

Opposition Leader Anthony Albanese said the comments were a disgrace. So did plenty of other politicians in the room. But how are Australians supposed to feel supported and confident in their Government when their own MPs are spreading misinformation and fuelling conspiracies within their ranks?

Albanese successfully moved a motion condemning the comments before launching a savage attack on the madness of conspiracy theorists.

"We will take the government seriously when the member for Dawson is expelled from the party," he said.

The Prime Minister gave an indirect rebuke to Mr Christensen but didn't name the rogue MP during a 15-minute speech.

"My government doesn't support misinformation in any shape or form," he said.

But we've already heard Scott Morrison defend Christensen's right to free speech, after he attended an anti-lockdown protest in Mackay. In the same breath he called rally-goers in Sydney "selfish."

Which is it, Prime Minister?

What we're seeing play out in Parliament is history repeating itself. Liberal MP Craig Kelly spent much of 2020 spreading increasingly problematic and misleading information about COVID-19.

He used his Facebook page to promote conspiracy theories, likened requiring children to wear masks to "child abuse" and declared that he would "wait to see the evidence" before being vaccinated against coronavirus, a month before the Morrison government rolled out a nationwide vaccination plan.

The prime minister refused to condemn his behaviour as Kelly delivered falsity after falsity, telling the National Press Club, "He’s not my doctor and he’s not yours, but he does a great job in Hughes."

It was Kelly that ended up quitting the Liberal Party to sit on the crossbench after increasing public pressure and a stern word from the PM.

But Christensen remains. And he's not alone. Nationals senator Matt Canavan and Liberals Gerard Rennick and Alex Antic have also waged their own campaigns against COVID lockdowns and various other Government policies. Rennick posted on Facebook questioning the accuracy of PCR tests despite repeated calls from the Government for anyone with symptoms to get tested.

Freedom of speech is one thing but spreading misformation in the middle of a global pandemic when fear and tension and pain is already heightened, is another.

As Dr Mike Freelander MP told Parliament later on Tuesday, "It is about time those in Government called to account those on their side who are undermining our response to the pandemic. To those whose statements are costing lives, and to those who are doing everything they can to undermine our national response to the biggest health crisis in over a century. And I don't just mean the Member for Dawson...the Member for Hughes. Senator Rennick, Senator Canavan and others, who are doing their best to cause increasing fear, increasing distrust..."

It's no wonder we're seeing COVID deniers shutdown entire regions like we did in Byron Bay. It's no wonder thousands of people are marching in the streets for their 'freedoms.'

Look at Parliament House. Look at our Government. There's no united front there, either.

In an effort to combat the misinformation, here's some articles to help you wade through it:

Reply
Upvote
I really think we should take a few electorates away from Queensland.
G
gu3st 6 months ago

Reply
Upvote
2 upvotes
The irony is, these two are in territory, Kelly in particular, where you wouldn't actually want to catch COVID.  This embarrassing pair have been shielded by the very people observing restrictions that they're exhorting to 'Wake up!'.
D
daijobou 6 months ago