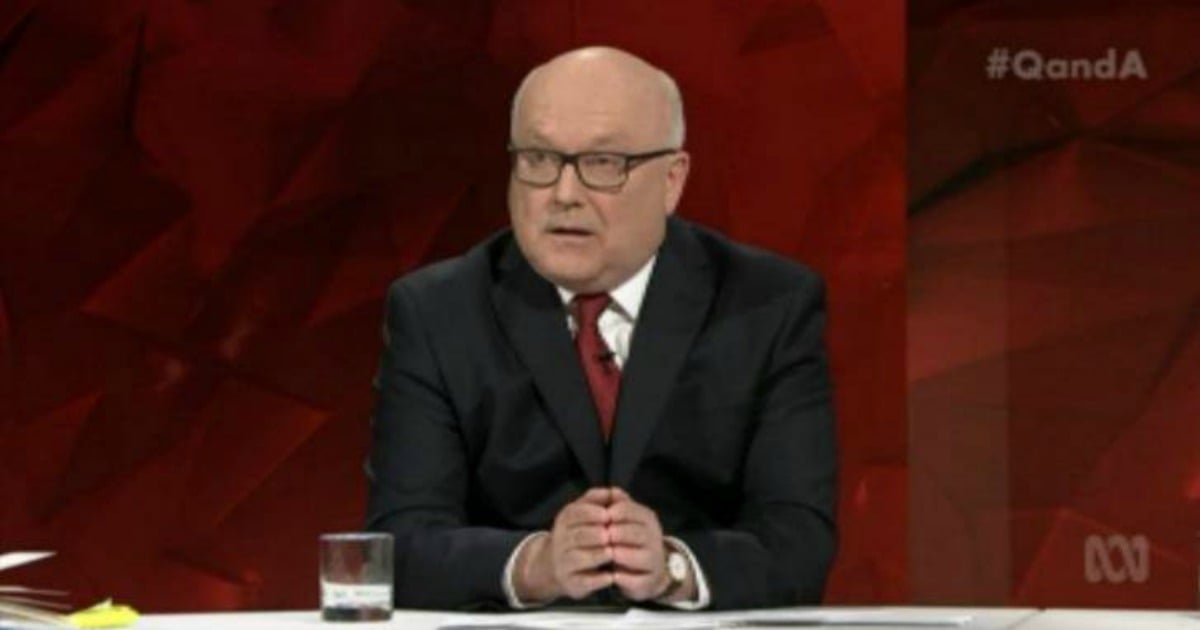 Attorney-General George Brandis engaged in a heated discussion about offshore detention centres on Q&A on Tuesday night, but it was the senator’s suggestion wrongly issued debt recovery notices could be resolved by contacting Centrelink that drew one of the biggest audience responses.

The program had heard from Lyndsey Jackson, the creator of a website for people who had wrongly received letters as part of the debt recovery scheme, who said hundreds of people were suffering anxiety as they were forced to disprove the claims.

“Tragically on the weekend we heard that a young man had taken his own life, in part attributed to the stress of having a $10,000 Centrelink debt issued to him from many years earlier,” she said.

Attorney-General George Brandis said there was a simple solution to remedy an incorrectly issued notice.

Deputy Labor Leader Tanya Plibersek, who was also on the panel, was quick to respond.

She then asked one of the audience members — a mother of three and former teacher now on a $22,000 disability support pension which was under review — how long she had spent on hold to Centrelink during her last call to the organisation.

“It took me a few weeks every day for 1.5 hours a day to make that call,” Fred Thorpe replied.

Senator Brandis moved to shift the blame for the bungled automated debt collection scheme, pointing out the data matching methodology used for the scheme was introduced in 2011 when Ms Plibersek was the minister for human services.

“I didn’t stuff it up the way you have stuffed it up, George,” Ms Plibersek responded

However Senator Brandis, backed up by political commentator Piers Akerman, said welfare payment reviews were fundamental for ensuring support was going to those who needed it most.

“People are not entitled to the benefits they claim do need to be identified, and because there are millions and millions of claimants of various forms of transfer payments under the welfare system in Australia that is going to have to be done by various techniques, including automated techniques,” Senator Brandis said.

Barrister and human rights advocate Julian Burnside weighed in on the matter, disagreeing and saying it was “inevitable” some people would take to much and it was better to avoid reviews which placed people under undue anxiety.

“…We need to decide as a matter of social policy that we would prefer to be generous and be taken advantage of on occasions than be mean and have catastrophic outcomes.”

Mr Burnside and Senator Brandis later traded blows after a member of the audience asked what could happen to asylum seekers on Manus Island and Nauru who would be subject to extreme vetting under the deal to have them resettled in the US.

Senator Brandis said the deal, made under the Obama administration, always included a plan for extreme vetting.

However Mr Burnside took the Attorney-General to task over why they were in detention, asking what offences he believed the refugees committed by seeking to come to Australia.

Senator Brandis said they committed “offences against our migration laws” but when pressed on which ones said he would not “quote them”.

Mr Burnside: Tell me why is it that none of them were ever prosecuted for having arrived the way they did? Instead we just punished them.

Senator Brandis: We don’t punish them.

Mr Burnside: Yes, we do.

Mr Burnside: Three years in a hellhole — that is punishment.

Mr Burnside: But you didn’t close it either.

Akerman warned that if the asylum seekers were allowed into Australia it would open the floodgates to others, saying “if you put the sugar on the table, the ants will come”.

Ms Plibersek said she “bizarrely” agreed with Mr Akerman that the refugees should be resettled in another country, saying she did wanted to avoid encouraging people smuggling.

However Michele Levine, the chief executive of survey company Roy Morgan, said a poll showed of the approximately 50 per cent of Australians who did not want the asylum seekers settled in Australia, it was not due to concerns about border security or “hordes of people coming”.

“It is really concerns about do we have enough housing, will we be able the fit them in, what about our own poor,” she said.

“Those are the sorts of issues that are concerning people.”