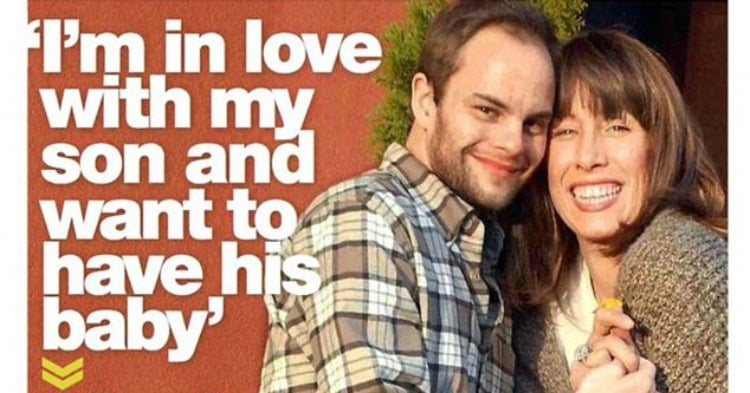 A British mother says she’s passionately in love with the son she gave up for adoption 32 years ago.

In a story published by UK daily newspaper The New Day, 51-year-old Kim West describes sex with her son Ben Ford as  “mind-blowing” and “incredible” — but insists their relationship isn’t incestual.

Instead, she says, she and her son are affected by a condition known as “Genetic Sexual Attraction,” whereby separated biological family members find themselves attracted to each other when they meet as adults.

According to The New Day, Kim fell pregnant while studying in California as a 19-year-old.

She gave baby Ben up for adoption soon after the birth, and he grew up in the US while Ms West returned to the her native UK.

Then in December 2013, computer coder Ford -- by this stage married and based in Michigan -- decided to locate his biological mother.

He reached out to Kim, and the pair started to exchange letters and phone calls. Eventually, in 2014, Ben decided to visit.

The sexual chemistry was almost instantaneous, Ms West tells The New Day. She says she invited Ben to a hotel room, where the pair pair shared champagne -- and their first kiss.

Soon after that they had sex, and just three days after that Mr Ford told his wife of two years he was leaving her.

Now, interior designer Ms West and her son have plans to marry and have a child together, although they say they'll use surrogacy if unable to conceive naturally.

Although incest is illegal in Michigan, where the couple currently lives, the pair say they are willing to move state to tie the knot.

'This is not incest, it is GSA. We are like peas in a pod and are meant to be together," Ms West told The New Day.

'I know people will say we're disgusting, that we should be able to control our feelings, but when you're hit by a love so consuming you are willing to give up everything for it, you have to fight for it.'

The unusual romance is not the first instance of genetic sexual attraction we've heard.

In December last year, Mamamia republished a Role/Reboot piece in which a writer with the pen name Lynn Beisner recalled falling in love with her own father.

"Like other people who have experienced GSA, I can only say that what came over me seemed irresistible," Ms Beisner wrote.

And in January 2015, an 18-year-old woman revealed the details of her relationship with her father in New York Magazine’s "The Science of Us" section.

Back in 2014, Mamamia also reported on a Brazilian couple with a six-year-old daughter, who discovered as adults that they had the same biological mother. That shock discovery was only made when the woman, who had been adopted out as a child, sought her birth mother and discovered it was the same woman who'd borne her husband.

Watch: A woman who fell in love with her husband explains what

What is ‘Genetic Sexual Attraction’?

While stories like this might surprise or even disgust you, there may actually be a scientific or sociological basis for sexual attraction between siblings who were separated at a young age.

As a 2011 University of Illinois study published in the Personality and Social Psychology Bulletin found, people appear to be drawn to others who resemble their kin or themselves — with those findings leading psychologist RC Fraley to speculate: “It is possible [that] as Freud suggested, incest taboos exist to counter this primitive tendency.”

The Guardian reports that, while  the frequency of cases GSA cases is difficult to quantify, some post-adoption agencies estimate that elements of GSA occur in a shocking 50% of reunions.

As Gonyo argues in her book I’m his Mother but he’s not my Son, sexual attraction between siblings may be a byproduct of “missed bonding” that would have normally taken place between family members had they not been separated. GSA may also be explained by the “Westermarck” affect — named after sociologist Edward Westermarck —  which holds that people living in close domestic proximity during the early years of life are desensitised to sexual attraction later in life.

Relatives who don’t live together miss out on the the daily events that prevent such attraction from occurring– so that, in effect, the ‘Westermarck’ effect doesn’t have a chance to work in those situations, as Canadian GSA expert and counsellor Dianne Mathes told CBC News.