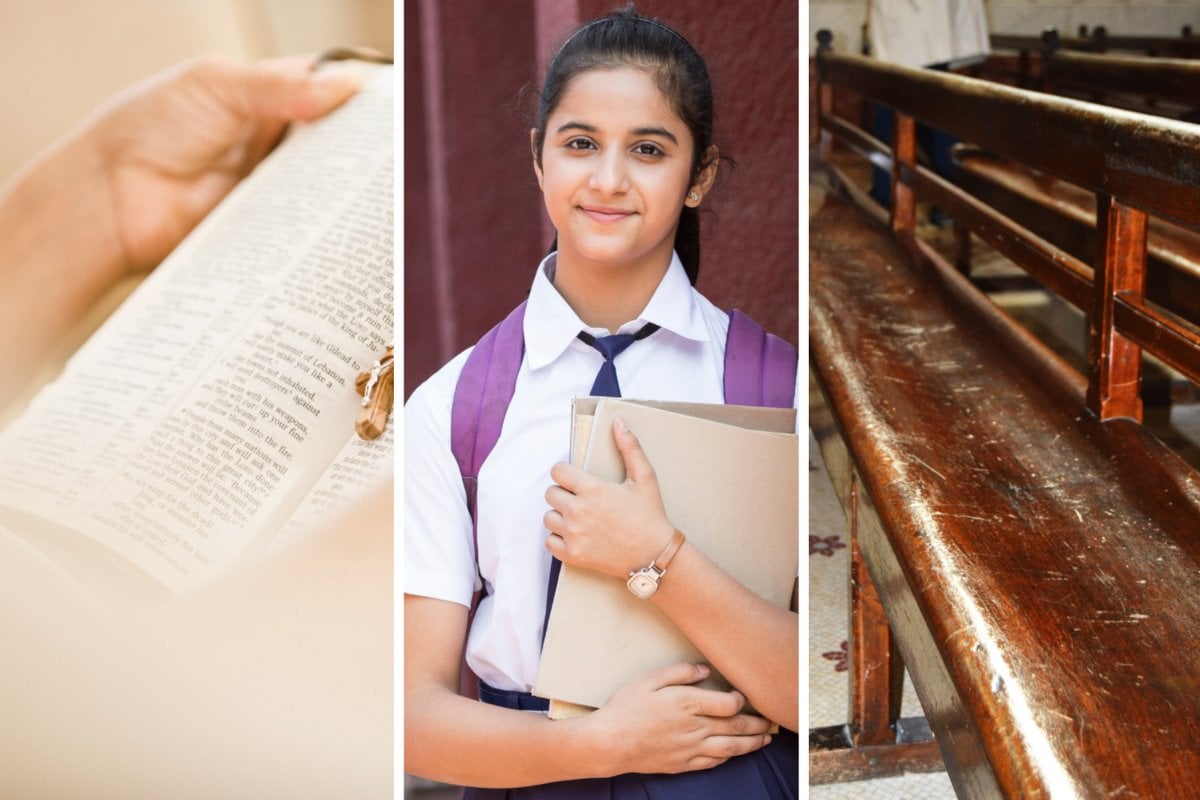 I was 17 and in the final weeks of Year 12. But there was something very important my Catholic high school needed to do before we were fully prepared to enter the real world as grown up, independent disciples of Christ:

There was a lot of weird s**t that went down. We ate a lot of biscuits, which made me constipated. We drank a lot of cordial. We washed the hands of other girls we'd had fights with, because forgiveness.

Quick pit stop: Have a listen to this episode of Mamamia Outloud, where Mia, Jessie and Holly discuss Pete Evans & The Butterfly Effect. Post continues after podcast.

Then a teacher had us all sit in a big circle. She explained that as we went through our lives, we'd have to go on job interviews and present ourselves nicely, which was okay, because God had made us all beautiful in our own unique ways.

She then went around the circle and proceeded to tell each of us what our most beautiful feature was?? But it was awkward because she clearly had to have a bit of a think when she got to me, and then she'd stop at someone else and laugh, 'I mean, you could be on Australia's Next Top Model'.

Did this have anything to do with Jesus? I don't... think so. But it's just one example of the experiences you have at a Catholic school and don't question until 3am on a random Tuesday when it hits you: what... the f**k... was that.

In hindsight, the 'here's what I think is pretty about you' chat was one of the more normal things that happened throughout my Catholic school education. It probably had far more to do with internalised misogyny than religion. But then there were... these.

What and for why?

Who came up with the idea of doing a dance (for God??) and why did we say yes?

I remember wearing a bright coloured sash and kneeling a lot, but also raising my arms to demonstrate praise. It looked a lot like this.

Watch my dance. For Jesus.

I'm impressed that no one ever laughed. We just genuflected. Earnestly.

Hymns that were actually... bangers.

ALL OF MY DAYS. I WANT TO PRAISE. THE WONDERS OF YOUR. MIGHTTTYYYYY. LOOOOVE.

I'm sorry but if the people who wrote the hymns for Mass went and wrote for Justin Bieber they'd be actual billionaires and someone needs to... tell them.

My school wasn't fancy enough for this, but I remember going to several other schools where there was a dedicated patch of grass you were not to walk on.

It was just so naughty to walk on that grass. I think it would kill God or something.

Why did I never feel self-conscious walking around after school on Ash Wednesday with black dirt on my forehead?

Probably because I was in a good mood from having free pancakes for breakfast the previous morning.

Simply by existing in the Catholic Church, you're full of sin. You were born with it. But Lent is a special time to feel more guilt, and ask for more forgiveness, because Jesus died on the cross for us and no offence but why can't you go without chocolate for 40 days you lazy s**t.

Every year I tried to give up something significant for Lent. Every year I failed and felt like I'd betrayed myself, my teachers, but also Jesus.

Do you know how old you are when you have your First Reconciliation and start confessing your sins and asking for forgiveness? Like, seven. Or maybe eight.

No one has done literally ANYTHING wrong at that age unless you're a psychopath, in which case you're probably not that concerned about being forgiven.

It gets to the point where you have to make up sins to confess to the priest, and it's like surely lying about my sins is a sin in itself - a sin I wouldn't have committed if it weren't for you forcing me to confess my sins.

If you want to see some bad decisions, ask primary school students to choose a name for themselves. But it can ONLY be the name of a saint, and they should probably have... a connection to it or whatever.

The weird part was then doing an assignment on the saint you chose, and thinking 'I dunno... it seems less like this person saw Jesus and more like they had some mental health issues...' but then having that name remain a part of your identity forever, regardless.

Getting to do a reading at Mass was a pretty big deal, but no one wanted the responsorial psalm. Why? Because you had to wait for the whole friggin church to say a line that no one really understood before you could move on to your next bit, and EXCUSE ME I THOUGHT I WAS MEANT TO BE THE STAR.

There was also something weirdly cult-ish about hundreds of children repeating the same words every four lines, especially when they were: Be merciful, O Lord, for we have sinned.

While there was some low-key weird stuff that went down if you went to a Catholic school, it does of course have its advantages. Ankle-length kilts for school uniforms. Priests and nuns who were constantly horrified by today's youth. A prayer coming on over the loudspeaker when you least expected it.

And of course, a healthy dose of bottomless Catholic guilt.

Reply
Upvote
We did so many liturgical dances at my primary school, many of them

Reply
Upvote
1 upvotes
@gu3st But you did try the incense right? The Priest swung that thing around like a bola