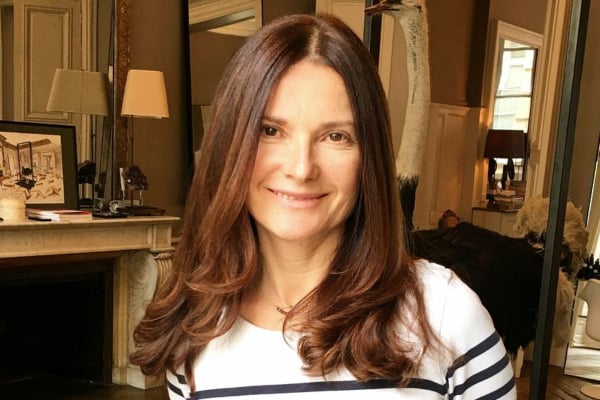 There was a time in our social consciousness when French women were the epitome of ageing gracefully.

Their chic take on monochrome outfits, indifference to wrinkles, joie de vivre and the ability to rock a striped shirt with a glass of red wine in hand was supposedly the superior way to age, but according to Why French Women Feel Young at 50… and How You Can Too, the latest book release by 59-year-old blogger and Parisian Mylène Desclaux, it’s a lot of bloody work.

Desclaux is writing from the perspective of a single woman in her late 50s, and she shares her methods for navigating dating, sex and her clearly terse relationship with her biological number. Her advice, however, is questionable at best, and… super problematic at worst.

For example, some of her main points advise women over 50 to never share their real age or throw themselves a birthday party. Have a celebration, she says, but say you’re celebrating something else. Grey hair is another dead giveaway, so please be religious with your salon appointments and don’t even think about wearing reading glasses, because squinting is apparently much more youthful.

Also, if you’ve had the bad luck of being given a ‘dated’ name, Desclaux says, instead consider adopting something more youthful. A quick google of ‘names that don’t date’ led me to this Mumsnet forum which listed names like Catherine, Victoria, Elizabeth, Charlotte or Emma. I guess you could also pick something more trendy, and change as needed.

According to the Sydney Morning Herald, Descalux also has a few rules when it comes to sex in your later decades.

“You need to revise the classics. The missionary is effective, but the cowgirl is no longer permitted. We’re no longer of an age to be viewed from below, except in complete darkness,” she writes, while listing widowers as a “a rare and highly sought-after commodity.”

Team Mamamia share the worst piece of advice we’ve ever gave and we are so sorry.

In not-at-all surprising news, women aren’t exactly welcoming her advice on youth with open arms, with some sharing their thoughts on social media.

Mylene Desclaux has written a bestselling book on how get a man in your 50s by staying slim and pretending you don’t need glasses. I just think there’s a lot lot more interesting in life than Obsessing about pulling Ian Duncan Smith lookalikes. pic.twitter.com/cC0CD3ArUb

This is awful. How about just be yourself; enjoy your life and have some fun https://t.co/2IDIyXrUYm

Oh please do absolutely piss off. Love my name because it’s mine and has served me well. I will wear my glasses because they help me work hard, read and be inspired, and besides, they are stylish and cool. I plan to have ALL the parties and celebrate all the milestones because like everyone else, I will soon be dead. I am not yet 50, but when/if I am, I shall be deeply grateful to have made it there. ???????????????? #IHopeThisFuckingBookTanks Update: wrote my Pool column on this. Link in bio.

See, the thing about women approaching 50 is that they’ve had plenty of time to get confident calling bullsh*t on problematic ideas.

So they’re probably not the best demographic to target with questionable advice.

Should you want to, Why French Women Feel Young at 50: and how you can too by Mylène Desclaux is available now in hardback for $39.99 and paperback for $29.99 from Hachette Australia. You can find your most convenient retailer here.

I'm 59, I'm also proud of being 59 and my accomplishments being family, work and education. I've been used to being nice looking in the past and not enjoying my new jowls and sunken eyes. I'm sitting up in bed resting from a lower face lift and upper eyelid surgery 3 days ago. I currently have a face looking like a bloated blueberry and I'm looking forward to the swelling and bruising subsiding. One of my friends is not speaking to me because of it. I haven't told my big group of 60ish friends yet. I'm not sure what they will say, being close they will be honest!
I know I'm going to be happy with the outcome. I did it for me, no one else. My husband of 35 years is supportive but didn't really want me to do it. I colour my almost white hair but am thinking of going blonde grey now. Cadburymum

I'm 51. No time for that crap. You're right - we're not a good demographic to piss off. We're tired, we've had it with rubbish, and we're probably menopausal...

... and get those damn kids off my lawn!