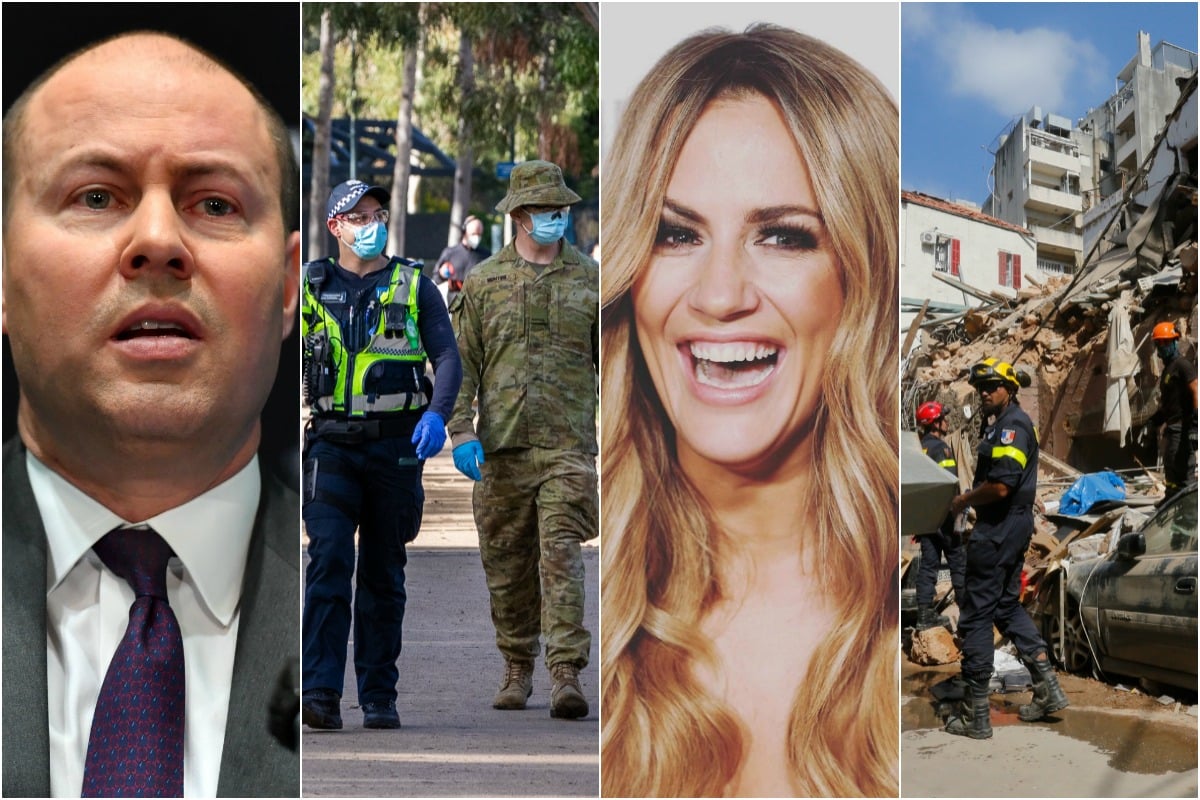 Hundreds preparing to descend on Melbourne CBD in protest.

Police have vowed to crack down on anti-lockdown protesters planning a Melbourne march in a "blatant breach" of COVID-19 rules.

In a statement on Thursday, Victoria Police said it was aware some people may be planning to protest in Melbourne's CBD on Sunday.

A Facebook event has called on people to march in opposition to the city's six-week shutdown and claimed to be part of a broader movement of planned protests.

More than 400 anti-maskers are planning to attend a 'March For Freedom' protest in Melbourne on Sunday. #9Today pic.twitter.com/3rDfotkwOD

"Let's blow this one up and fill up the streets to show these criminals we won't give up our country and livelihoods without a fight," the event description reads.

It had more than 100 confirmed attendees and 400 expressions of interest late on Thursday evening.

If they turn up, Victoria Police said it wouldn't hesitate to hand out $1652 on-the-spot fines or arrest protesters.

"This is a completely blatant breach of the chief health officer's directions and puts Victorian lives at risk," police said.

Victorians told not to stockpile meat.

Victorians are being urged not to panic buy meat as the state's abattoirs cut back operations under industry restrictions to help slow the spread of coronavirus in workplaces.

The reduced production is part of a sweeping stage four Melbourne lockdown that has progressively come into effect since Sunday.

Victoria recorded 471 new cases of COVID-19 and eight more deaths on Thursday, far fewer than the record-breaking 725 cases and 15 deaths reported on Wednesday.

Victoria Health believes the rate of new COVID-19 infections in the state will start to fall more significantly in the next week.

There are now 533 Victorians in hospital with coronavirus in the state, and 42 of those in intensive care. A young child is among six people under the age of 40 critically ill.

Genomic testing has revealed the program could be linked to a significant number of cases, if not all cases, in Victoria's second coronavirus wave.

Newcastle has become a NSW COVID hotspot after a man with the virus visited several pubs at the weekend and attended a local A-League match.

The man in his 20s is a close contact of a Newcastle teenager whose diagnosis shut down his high school on Thursday and sent two football teams into self isolation.

A third infection has now been confirmed.

A third case of #COVID-19 has been confirmed in Newcastle. He is a male in his teens. Anyone who attended St Francis Xavier's College (Hamilton East) on Monday 3, Tuesday 4, and Wednesday 5 August is urged to lookout for symptoms and get tested. More: https://t.co/AyfjUJBMCp pic.twitter.com/NdT0Mj4Z4m

There were 12 new cases recorded across the state yesterday, with another two men in their 20s closing down several venues across Sydney.

The premier is asking young people to "limit the number of places that you go to".

As of today, people entering New South Wales from Victoria are now required to spend 14 days in hotel quarantine at their own expense.

Uber has also upped its advice, urging all NSW customers to wear a face mask when using the service moving forward. An alert was sent to app users last night.

Uber is now recommending that riders and drivers in NSW wear face masks or other coverings while utilising its services.

The company says it is working to make face masks available to drivers who actively use the Uber Driver app in the state. pic.twitter.com/q8X1VF5Dk0

The only other state or territory to record a new case was South Australia.

A school for adult learners has been closed in Adelaide after a woman in her 20s tested positive.

It will be easier for businesses hurt by coronavirus to apply for JobKeeper after the end of September under changes made by the federal government.

Treasurer Josh Frydenberg says the changes, along with more Victorian companies joining the scheme, will add another $15.6 billion to the cost of the wage subsidy program.

Previously, businesses and not-for-profits hoping to receive JobKeeper from September 28 to January 3 would have to show a significant fall in turnover in both the June and September quarters. 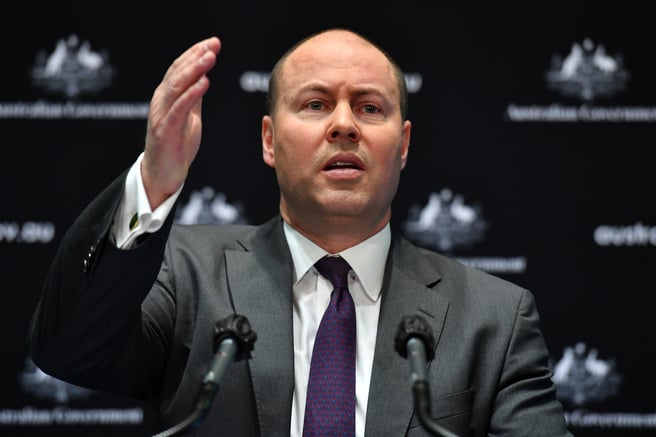 Josh Frydenberg has announced some changes to the JobKeeper scheme. Image: Getty.

But under the nationwide changes, they will just have to show turnover has significantly fallen for the September quarter, compared to the same period last year.

Businesses and not-for-profits will have to prove their eligibility again in January, but it will be based on the December quarter rather than the two previous quarters as well.

Staff who were employed as of July 1 will now be able to access the program.

The payment is currently $1500 a fortnight but will reduce to $1200 for full-time employees from October to December.

It will then reduce again to $1000 until March.

Cyprus has located and questioned a Russian man named in multiple news reports as the owner of the ship that carried a cargo of ammonium nitrate abandoned in Beirut.

The chemicals, which had been stored at Beirut port for years, exploded on Tuesday in the country's worst peace-time disaster. 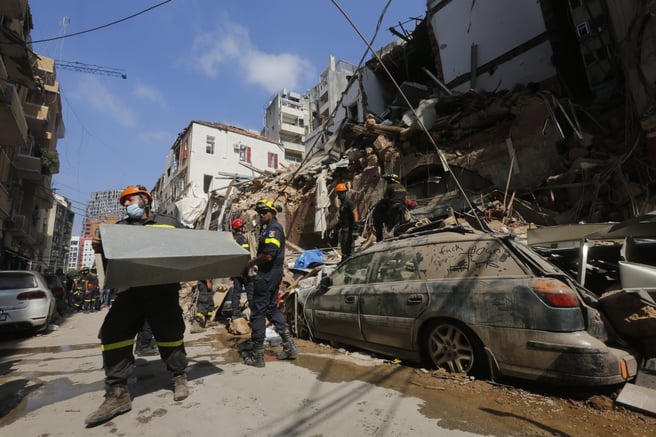 Emergency workers search a collapsed building on August 6 in Beirut, Lebanon. Public anger swelled over the possibility that government negligence over the storage of tons of ammonium nitrate was behind the catastrophe. Image: Marwan Tahtah/Getty.
ADVERTISEMENT

A police spokesman said an individual, who he did not name, was questioned at his home in Cyprus on Thursday afternoon.

Sixteen Beirut port staff have also been detained over the blast.

A coroner has ruled on Caroline Flack's death.

The former Love Island host died by suicide in February, weeks before her trial for allegedly assaulting her boyfriend.

Coroner Mary Hassell said, in an inquest verdict overnight, that the 40-year-old took her own life "because of an exacerbation of fluctuating ill-health and distress".

"She knew she would face the media, press, publicity — it would all come down upon her," the coroner said.

Flack's family have accused prosecutors of singling her out because of her celebrity status.

Cold snap being felt across most of Australia.

Parts of the country experienced their coldest morning in a decade yesterday, with temperatures reaching minus 10C in some areas of NSW and Victoria.

Adelaide is expected to experience its coldest day since 2005, with a top of just 10C predicted today.

Good news! ☔️ We’ll be seeing widespread useful rain across multiple drought-affected states and territories during the second half of this week.

The cold snap is expected to continue over the next few days. A low pressure system is moving from the west bringing with it lots of rain for central, south, west and east Australia.

Severe weather is likely to occur in this weather event, so be sure to keep up to date with the latest warnings in your state or territory.

- An armed man is holding one hostage at a bank in northern France, with police sources saying the gunman is believed to have Islamist sympathies.

- Journalist Jonathon Swan says President Donald Trump was "happy" with their viral TV interview. He told Swan after the nearly 40 minute chat; "you’ve got to run it in full. You can’t be editing, you can’t be cutting me off, you’ve got to let the sentences flow." ﻿

Reply
Upvote
I live 2 hours north of Adelaide (Clare) and the maximum temperature here yesterday was 6.8 also the Flinders Ranges has significant snowfalls yesterday. It would be great to see some mention of any news in regional SA here!
F
fightofyourlife 2 years ago

Reply
Upvote
1 upvotes
He visited *several* pubs over the weekend and went to a football game? Are these people ever at home? It seems a lot of these positive cases go out to socialise during a global pandemic more than I go out under normal circumstances. It's mind-boggling to me.
The longer we try to pretend everything is normal, the longer it will be until we can actually get some normality back in our lives. We opened up again for the economy, not for our health. Remember that and stay home.
G
gu3st 2 years ago

Reply
Upvote
2 upvotes
@fightofyourlife I think that it would be easier as a healthy young guy to not realise that he was infected than you think. Nor were the numbers in NSW terrible yet, but I think we're at a delicately balanced and crucial time and it's true that we should be dialling down the socialising right down before that needs to be mandated.
I would have had the odd weekend like that back in the day.
R
random dude 2 years ago

Reply
Upvote
3 upvotes
@fightofyourlife Well, he is in his twenties, I know at that age I was gadding about and could easily add at least 7 more things to that list.
Mind you, this is not a defence for his actions which scored highly on my dumb O - metre
F
fightofyourlife 2 years ago

Reply
Upvote
1 upvotes
@gu3st Yes, I'm sure he didn't know he was infected. I'm sure most of the people who have been responsible for starting or growing clusters didn't know they were infected. That's the whole problem and exactly why we shouldn't be going out when it's not necessary.
Without a pandemic, go for your life. Go to six pubs in a single weekend. Go to 20, I don't care. We are in a pandemic though and we should all know enough by now to be much more careful. Including young people.
Resources
Very Peri
News
General
Opinion
True Crime
Politics
Sport
Explainer
Entertainment
Celebrity
Reality TV
Movies
TV
Books
Rogue
Royal
Lifestyle
Beauty
Fashion
Weddings
Home
Wellness
Health
Fitness
Travel
Food
Family
Before The Bump
Pregnancy
Baby
Kids
Teens
School
Parent Opinion
Work & Money
Money
Finance
Career
Lady Startup