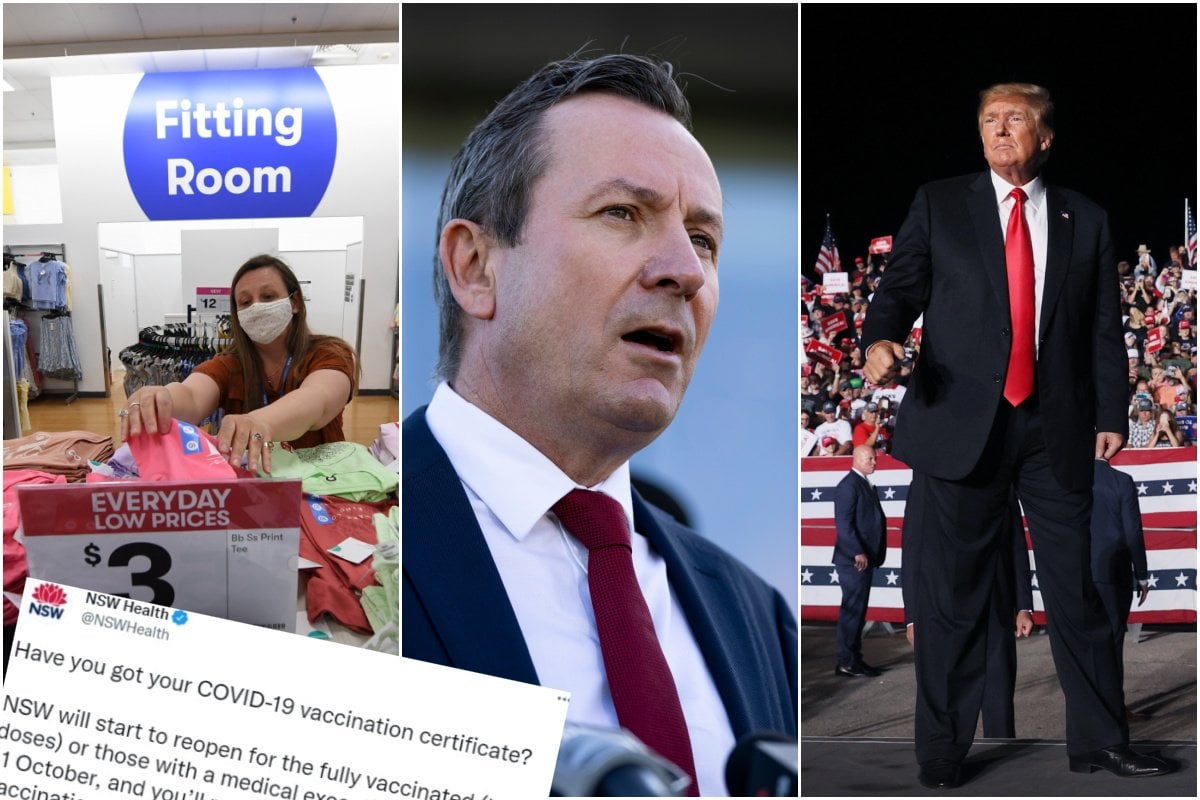 Queues outside pubs, Kmart and salons at midnight on NSW's 'Freedom Day.'

Millions of people in NSW will today be able to visit pubs, restaurants, gyms, hairdressers and host dinner parties in their homes, after 106 days in lockdown.

The state reached 70 per cent double dose vaccination last week, triggering the reopening of most businesses for trade from 12:01am on Monday 11.

NSW Premier Dominic Perrottet has called for patience and respect as the state emerges from lockdown amid concerns customer-facing staff could be at risk of abuse from the unvaccinated.

His hope is that police will only need to be called as a last resort.

After 15 weeks, almost 63,000 COVID-19 cases and 431 deaths, a "lockout" of the unvaccinated begins; only those fully vaccinated will be able to enjoy the new freedoms until they open to everyone on December 1.

Business owners and hospitality staff are nervous the risk of transmission is high, and the risk of abuse even higher.

Bars, restaurants, shops and gyms have thrown their doors open across Greater Sydney and other parts of NSW after more than 100 days in COVID-19 lockdown. #9Today pic.twitter.com/KzZs1obBhB

"We're the first state in the country that's put these plans in place," he told AAP.

"There will be challenges and difficulties as we go through this ... but we certainly don't want to be having police moving through cafes and restaurants.

"That's just not the state that I love and know."

NSW on Saturday reached 90.3 per cent first-dose vaccination coverage for those eligible, while 73.5 per cent of the eligible population is now fully jabbed.

On its final day of lockdown on Sunday, the state reported 477 new local COVID-19 cases and six deaths.

None of those who died - all men - were fully vaccinated.

Australia’s international borders could re-open for vaccinated travellers in NSW as early as November 1 under a fast-tracked plan announced on Sunday by Prime Minister Scott Morrison.

The proposal follows discussions between Morrison and new NSW Premier Dominic Perrottet to fast-track the rollout of home quarantine - moving away from 14 days in a hotel.

"I know the NSW Government is looking at ways to fast track home quarantine in November and if that happens we will be able to move to facilitate the opening up of the international border into NSW sooner.

News.com.au reports that could be as soon as November 1.

The ACT has to wait a few more days before it can join the surrounding state of NSW and start easing COVID-19 restrictions.

The territory, which is due to start lifting its stay-at-home orders on Friday, reported 30 new cases on Sunday.

Of these, only seven were in quarantine for their entire period of infection.

The ACT has 15 patients in hospital, including six in intensive care, with five of those requiring ventilation.

Chief Minister Andrew Barr on Saturday said he would no longer be facing the media on weekends to provide an update on the situation.

Canberra's business sector is calling for extra support, including something similar to the controversial ChooseCBR scheme, as the ACT emerges out of lockdown, via @FinnianMchugh https://t.co/OjXs38Mq1a

He said the national capital is "on the path to becoming one of the most vaccinated cities in the world", with more than 97 per cent of Canberrans having received a first dose and close to 70 per cent a second.

Even so, Mr Barr said the government is working to get as many people as possible fully vaccinated, with the next three weeks focusing on second doses.

Under a government trial of COVID-19 vaccine checking systems, Reece Tuohey will be able to double the number of patrons at his Bendigo gym.

It's not before time, he says.

"For gyms it's been a rough road, it's been getting close to two years now," Mr Tuohey told AAP.

His gym, BodyFit Training, is one of 15 regional venues participating in the trial starting on Monday, which will see the business checking patrons' jab status.

The system will be scaled up so double-vaccinated Victorians can attend the Melbourne Cup and live music within weeks, under plans to open up the economy when the state hits 80 per cent vaccination targets, expected around November 5.

Up to 10,000 punters will be allowed at the Melbourne Cup and live music lovers can attend a concert at the Sidney Myer Music Bowl at the end of October as the Victorian government prepares to slowly open up the state. #covid19 https://t.co/ry1IrmT1fw

About 10,000 racing fans will be able to attend the Melbourne Cup on November 2, while Oaks Day and Stakes Day will be allowed similar-sized crowds if the state reaches its 80 per cent double-jab threshold.

A live music event will also be held at the Sydney Myer Music Bowl on October 30 with thousands attending.

On Sunday Victoria added 1890 infections to its caseload and an additional five deaths over the past 24 hours.

A Victorian couple have been arrested in South Australia after allegedly sneaking into the state without permits.

The 55-year-old man and 51-year-old woman from the country town of Colignan, near Mildura in Victoria, were arrested in Moorook South in South Australia's Riverland region on Sunday.

SA Police will allege they drove into the state, avoiding checkpoints, with neither having approval to enter.

Both have tested negative for COVID-19.

The man and woman have been charged with failing to comply with a direction and are due to appear in the Berri Magistrates Court via video link on Monday.

Deputy Prime Minister Barnaby Joyce didn't hold back in an article for The Sunday Times over the weekend saying of WA's leadership during the pandemic; "Maybe he can develop his own currency… It's kind of ridiculous. This is starting to smell like arrogance and not logic."

"Ultimately, unless you are going to really turn yourself into a hermit kingdom, like we'll have North Korea and a kind of anther hermit kingdom on the west coast of Australia, then COVID is going to arrive."

WA Premier Mark McGowan has hit back in a Facebook post calling Joyce an "embarrassment to the Australian Parliament."

"I'm getting pretty tired of the tacky, cheap attacks on WA. We don't live in a cave, we're not North Korea, and anyone paying any attention at all would appreciate the remarkable quality of life we're able to enjoy here," he said.

"Our position is clear - vaccination is our way out of this pandemic. We'll ease our border controls with COVID-infected States when it's safe to do so and based on health advice.

"But we won't rush to do it too early, undo everything that we have achieved and needlessly put lives at risk. I don't want to see WA forced into lockdown over Christmas.

"I don't think that approach is controversial."

The Morrison government has brought forward an increase in the child care subsidy to start in March next year, four months earlier than originally planned.

But Labor described the package as a dud, with many families left out in the cold and without getting anything additional.

Education Minister Alan Tudge said about 250,000 families will benefit from the increased subsidy and by more than $2200 per year on average.

"So that is great for families," Mr Tudge told reporters in Canberra on Sunday.

"It is also really going to help the economy as well, by reducing some of those workforce disincentives."

Families are set to benefit from cheaper childcare earlier than promised as the Morrison government brings forward subsidy changes.https://t.co/SwhT2QPNXs

He said the government has been able to work across departments and service providers to make necessary technical changes sooner than was planned.

"From now, families can have that confidence that this financial year they will not hit that cap and they are not ever going to hit that again," he said.

"So they don't have to ration any child care, which I know that some parents do."

But Labor's childhood education and development spokeswoman Amanda Rishworth said the rehashed announcement from the May budget is a dud and leaves some 750,000 families behind.

"With the government's child care package, only 25 per cent of families are going to get any relief," she told reporters in Adelaide.

Made some amendments to today’s headline #auspol pic.twitter.com/3S7eoQ90ow

"Compare that to Labor's cheaper child care plan, which delivers relief to 97 per cent of families."

Another earthquake recorded in Victoria.

Another earthquake has struck Victoria over the weekend prompting more than 100 reports near Murrayville close to the South Australian border.

Victoria's State Emergency Service said a 4.8 magnitude earthquake with a 2km depth was recorded with its epicentre near Murrayville.

It occurred at 3.47am on Saturday morning with the state emergency service receiving more than 100 reports from residents who'd felt something.

It comes just two weeks after the state experienced its largest earthquake in history, on September 22.

The magnitude 5.8 earthquake at Mansfield damaged buildings and was felt across Melbourne and as far away as Canberra, Sydney and Adelaide.

A second quake registered at magnitude 4 on the Richter scale followed, also at Mansfield, about 15 minutes later.

Wildflower is one of dozens of new events ignited by the Federal Government’s RISE grant program to reinvigorate the Australian live music industry in 2022.

I am beyond thrilled to announce that I am performing at WILDFLOWER in March-April next year, alongside some phenomenally talented women including @missyhiggins, @kaseychambers, and @sarahblasko.https://t.co/zwCBFK0Y5a#wildflower #wildflowerfestival pic.twitter.com/oerxqnMvd3

The festival will open in the Yarra Valley before travelling to Brisbane and the Hunter Valley.

Former US president Donald Trump has repeated his claims of fraud in the 2020 election and his latest Save America rally in Iowa.

Republican Senator Charles Grassley and Governor Kim Reynolds embraced Donald Trump's return to Iowa on Saturday, standing by him as he repeated his false claims of voter fraud and a stolen election to a crowd of thousands.

The state's senior senator, who recently announced plans to run for an eighth six-year term, praised Trump as he introduced him by noting there was "a great crowd honouring a great president of the United States".

Neither Grassley nor Reynolds made any reference to Trump's post-presidency, during which he has continued to lie about the results and urge Republicans to conduct "audits" of the vote counts. Reynolds, also seeking reelection next year, gushed with praise for Trump in her brief remarks.

Trump spent almost 30 minutes of the rally, his first in Iowa since his 2020 campaign, arguing falsely that he had won Arizona, Georgia and Pennsylvania.

There is no evidence of widespread voter fraud stemming from the 2020 US election.

- A new report from the End Covid for all Campaign says two-thirds of 77 epidemiologists in 28 developing countries believe if action is not taken now, it would take less than a year for COVID-19 to mutate and render current vaccines ineffective.

- New Zealand has followed Australia to purchase a new COVID-19 antiviral treatment, molnupiravir, that can prevent hospitalisations from COVID.

- A twin-engine plane carrying a group of skydivers has crashed in Russia killing 16 people.

A new report from the End Covid for all Campaign says two-thirds of 77 epidemiologists in 28 developing countries believe if action is not taken now, it would take less than a year for COVID-19 to mutate and render current vaccines ineffective.

This! I don't think people realise that we are absolutely still on a knifes edge & we need to put as much effort into vaccinating other countries as our own. Honestly 10billion would be much better spent on that than on submarines.
M
mumma-cat 7 months ago