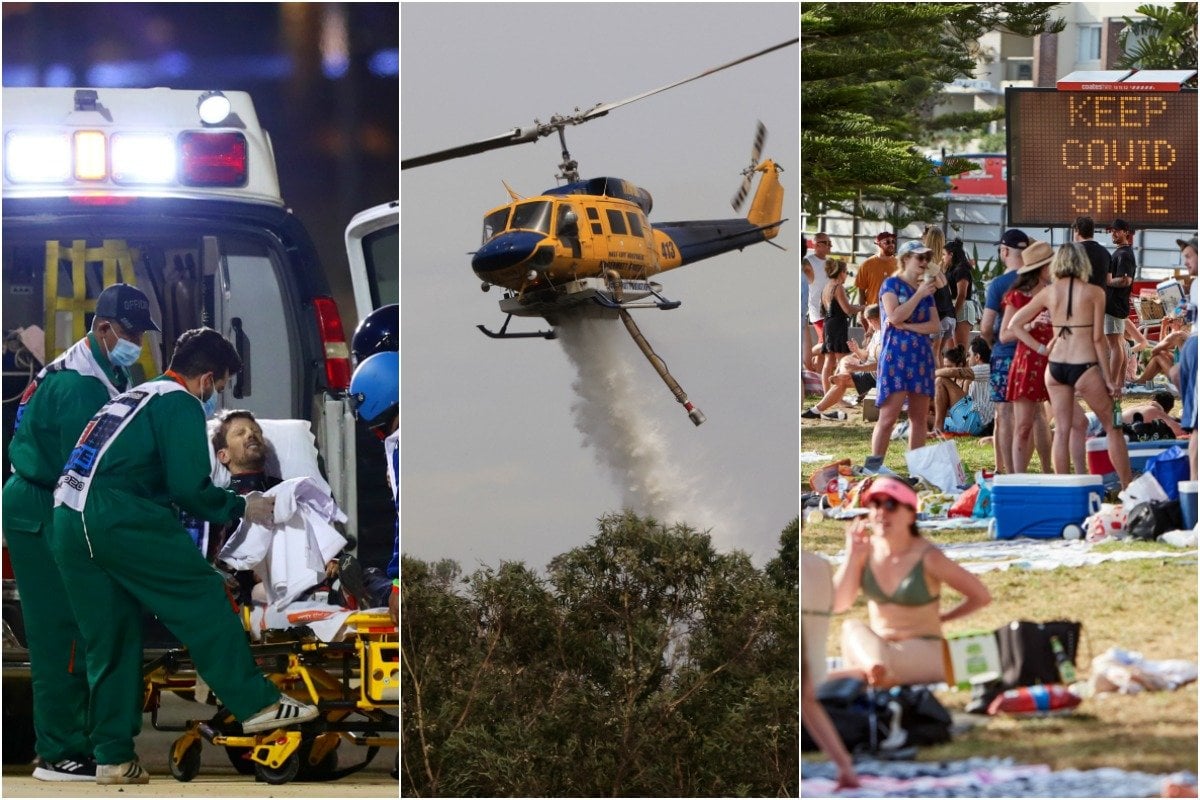 Queensland is facing its first major test of the bushfire season with extreme heat and strong winds fuelling a fast-moving fire on Fraser Island.

The blaze has been burning for seven weeks but intensified over the past 48 hours with the fire front now kilometres from the community of Kingfisher Bay.

Queensland is facing its first major test of the bushfire season as extreme heat and strong winds fuel a fast-moving fire on Fraser Island.https://t.co/H6QFW2mLTo

The state is currently fighting more than 30 grass fires and two bushfires.

Southeast and southern Queensland are also likely to experience elevated temperatures from Monday, with no respite until at least Thursday.

Parts of Sydney - including the city - broke the 40C barrier for a second straight day on Sunday after swathes of western NSW, South Australia and northern Victoria baked through even higher Saturday temperatures approaching 45C.

The mercury pushed past 40C in many Sydney suburbs, including Penrith, Canterbury, Bankstown and Holsworthy.

A gusty southerly arrived late on Sunday afternoon, quickly dropping temperatures by more than 10C in some areas as it moved north.

The change is expected to bring cooler temperatures for Monday before the heat returns to NSW from Tuesday.

There are 60 bush and grass fires currently burning across the state, with a blaze at Northmead in western Sydney destroying one home.

Another difficult day for firies working in extreme heat - but the change is heading up the coast! At 5pm, 62 bush and grass fires, with the Faulconbridge fire at Watch and Act. The change has moved through the Illawarra with temps dropping about 10 degrees. #nswrfs #nswfires pic.twitter.com/UNeDT7gwWw

This week's national accounts are expected to show the Australian economy has emerged from recession, but it still has some way to run before it gets back to its pre-pandemic levels.

The September quarter national accounts are released on Wednesday.

Economists' forecasts centre on a 2.4 per cent increase in growth for the quarter, coming after the steep seven per cent contraction in the June quarter that marked the country's first recession in nearly 30 years.

More than 2 million workers have left the $101.3 billion JobKeeper scheme since the federal government reduced the wage subsidy at the end of September in a sign of economic recovery. https://t.co/5YDfk79SZJ

However, this would still leave annual growth down more than four per cent.

More than two million workers have left the JobKeeper scheme since the end of September, which the government says is another promising sign of economic recovery.

Support for Scott Morrison has risen to its highest level in four months, the latest Newspoll published by The Australian shows.

The prime minister's approval ratings jumped two points to 66 per cent, the highest since July-August and before the outbreak of the second COVID-19 wave in Victoria.

Dissatisfaction with his performance also fell two points to 30 per cent.

Satisfaction with Anthony Albanese's performance as Opposition Leader rose one point to 44 per cent while his dissatisfaction rating rose two points to 41 per cent.

Mr Morrison rates 60 per cent as preferred prime minister, a jump of one point, while Mr Albanese rates 28 per cent, a fall of two.

The Newspoll shows the ­Coalition maintaining its 51-49 two-party-preferred lead over Labor.

Quarter of Victoria workers back on deck.

Thousands of Victorian workers are returning to the office for the first time in nine months.

Since the first wave of COVID-19 hit in March, Victorians able to carry out their duties from home were told to steer clear of offices including Melbourne's CBD.

That will change from Monday, with workplaces welcoming 25 per cent of their staff back on site.

It means businesses with fewer than 40 staff can have 10 on-site, as long as they comply with prescribed density limits.

Premier Daniel Andrews announced the change more than a week ago, with Chief Health Officer Brett Sutton confirming it would come into effect just before midnight on Sunday.

The state's public service is not incorporated in the new edict and Professor Sutton clarified office workers must wear face masks when indoors.

The planned easing of restriction allowing South Australians to have gatherings of up to 150 guests will go ahead on Tuesday despite a major quarantine breach.

Chief health officer Nicola Spurrier is asking event hosts to be aware of at-risk locations and tell guests to stay at home if they visited and haven't returned a negative test.

"What you don't want is somebody who is potentially infectious with this virus, and people have had very minimal symptoms in many cases, coming into a private gathering which is a higher risk because we allow standing up drinking and also dancing," she said on Sunday.

There were no new cases reported on Sunday but Prof Spurrier said a man's decision to leave quarantine put the state at significant risk.

The man visited a number of locations including a hotel, Guman y Gomez, Boost, Anaconda, Big W, and a Kmart.

Thousands of people across Adelaide are being urged to get tested after a person who was ordered into isolation went shopping, not knowing they had COVID. #9Today pic.twitter.com/INlko2vARN

Lewis Hamilton celebrated his seventh world championship by winning a Bahrain Grand Prix that will be remembered in Formula One annals for Romain Grosjean's seemingly miraculous escape from his fireball inferno.

Grosjean, 34, scrambled to get out of his burning car for almost half a minute before eventually leaping away and into the arms of Formula One doctor, Ian Roberts, one of the first men on the scene.

On the opening lap, Grosjean moved to his right at the third corner, before hitting the front-left wheel of Daniil Kvyat's AlphaTauri, and penetrating the steel barrier at 140mph. The force of the impact, which registered at 53G, split his machine in two.

We are so thankful that Romain Grosjean was able to walk away from this. We did not need a reminder of the bravery and brilliance of our drivers, marshals, and medical teams, nor of the advances in safety in our sport, but we truly got one today#BahrainGP 🇧🇭 #F1 pic.twitter.com/z8OeTU5Nem

Grosjean's cockpit instantly burst into flames, and the sport held its breath as television cameras cut hastily away from the extraordinary accident and the race was immediately stopped.

After a number of minutes, Grosjean's Haas team mercifully reported that their driver was out of the cockpit.

He was then pictured sitting in the medical car before limping towards an ambulance, aided by Roberts and medical car driver Alan Van Der Merwe. He had leapt out of his burning machine with his racing boot missing from his left foot.

Grosjean was airlifted to the BDF Military Hospital, 10 miles north of the Bahrain International Circuit, with burns to his hands and ankles and suspected broken ribs.

It is also understood he might have broken a bone in his foot following one of the biggest accidents in Formula One's recent memory.

Senior US Republicans say a transition to a Joe Biden presidency now looks inevitable, as President Donald Trump questions whether the Supreme Court will even hear any of the challenges his campaign has vowed to pursue.

Trump's comments in a telephone interview with Fox News Channel on Sunday came as Republican Senator Roy Blunt, chair of the congressional inaugural committee, said they expect Democrat Biden to be sworn in as president on January 20.

"We're working with the Biden administration, the likely administration on both the transition and the inauguration as if we're moving forward," Blunt of Missouri said on CNN, though he stopped short of acknowledging Trump lost the November 3 election.

Sen. Roy Blunt: "We're working with the Biden administration -- likely administration -- on both the transition and the inauguration as if we're moving forward." https://t.co/HxjomLPkN3 pic.twitter.com/mRqoBcqID8

Governor Asa Hutchinson of Arkansas is one of a few Republicans to refer to Biden as the president-elect.

Trump used his interview to repeat the allegations he has made, without evidence, about widespread electoral fraud - claims that have been rejected by numerous judges.

Pennsylvania's highest court has thrown out a lower court's order preventing the state certifying dozens of contests on its ballot. Justices remarked on the lawsuits "staggering" demands while having "failed to allege that even a single mail-in ballot was fraudulently cast or counted."

Pennsylvania Supreme Court dismisses lawsuit against mail ballots with prejudice in another defeat for Trump https://t.co/kjfhleZPb1

The weightlifter-turned-actor from Bristol, who also earned an MBE, died after a short illness, his agent Thomas Bowington said in a Facebook post.

Prowse won the role playing Vader due to his impressive two-metre physique, but with his West Country accent deemed not quite suitable, the part was instead voiced by James Earl Jones.

"May the force be with him, always!" Bowington said in a statement.

"Though famous for playing many monsters - for myself, and all who knew Dave and worked with him, he was a hero in our lives."

- This year's postponement of the Tokyo Olympics has cost organisers about $2.6 billion.

- Isolated riots have broken out in Paris where tens of thousands of people marched in protest against police brutality and a new security law.

- The United States can expect a "surge upon surge" in COVID-19 cases during and after the Christmas holiday period, says disease specialist Dr Anthony Fauci.

- Two separate bombings in Afghanistan have killed at least 34 people with no immediate reports of any group claiming responsibility.