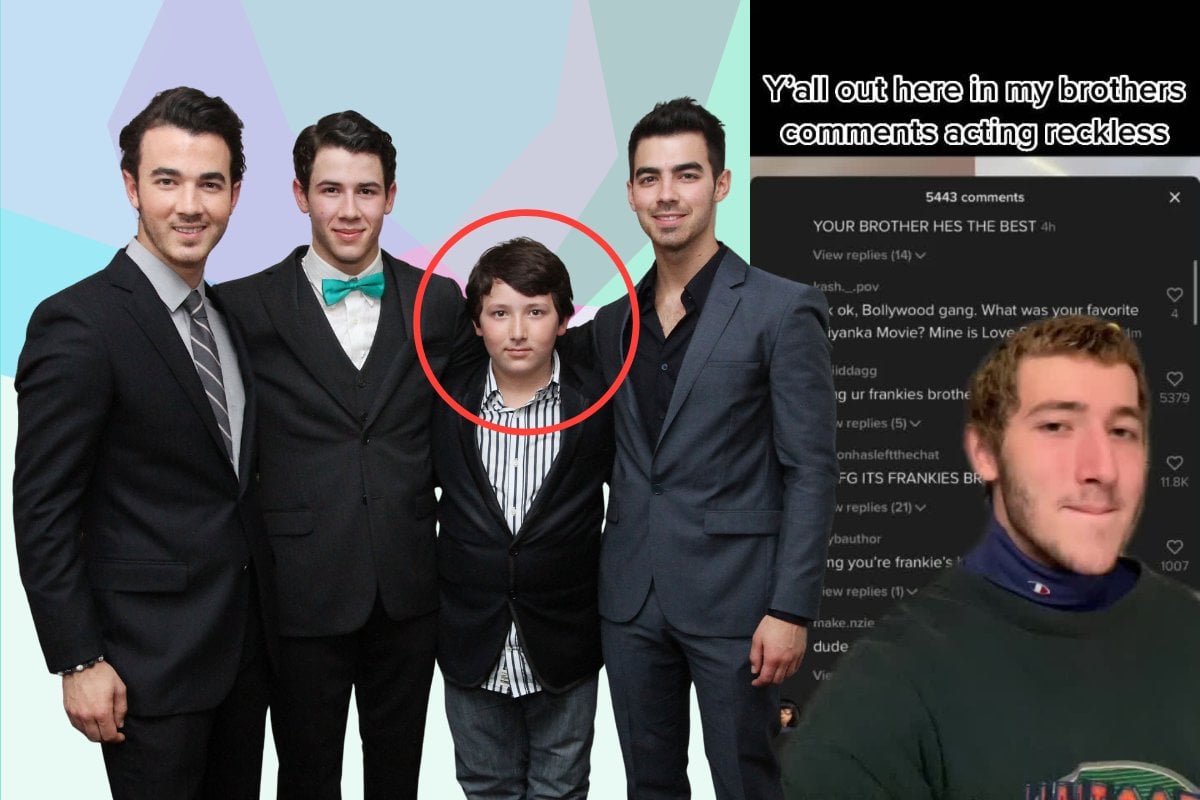 For more than a decade, the Jonas Brothers have been known as a trio.

The name is rather self-explanatory, but in case you're unaware Kevin, 33, Joe, 31, and Nick, 28, are real-life brothers who are also... in a band together.

They rose to fame as teen stars, with purity rings, very of-the-time hair styles and romances with their equally as 'squeaky clean' (at least back then) Disney colleagues, including AJ Michalka, Miley Cyrus, Selena Gomez and Demi Lovato.

And a fair few bangers under their belt too, to be honest. 'Burnin' Up' still goes off.

But throughout the entirety of the Jonas Brothers' career, which picked back up after the band got back together in 2019, there has been another lesser-known Jonas.

'Lesser-known' until recently, when Frankie Jonas became the official favourite Jo Bro of precisely all of TikTok.

The youngest Jonas was only four when his brothers formed their band. Since he's eight years younger than Nick, it made sense that Frankie wasn't involved in the band growing up.

Instead, he has spent the last 15 years known as the 'Bonus Jonas' to fans. 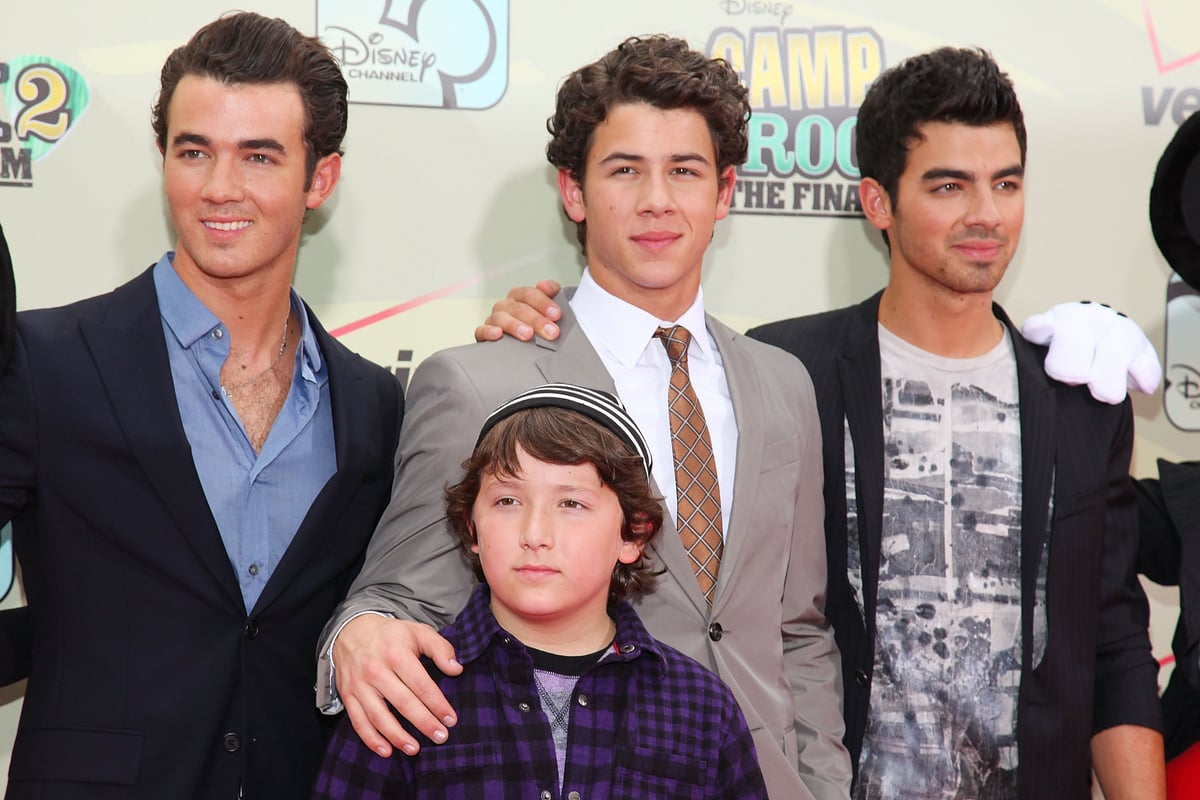 His childhood was a little unorthodox, on account of those famous brothers.

Frankie mostly grew up in Texas, but was a regular on red carpets with his siblings and made a couple of appearances on Jonas, their creatively named Disney Channel TV show.

He then voiced characters in Disney comedy Spooky Buddies and in animated film The Reef 2: High Tide.

In 2010, Frankie appeared in Camp Rock 2: The Final Jam which also starred his brothers and Demi Lovato. 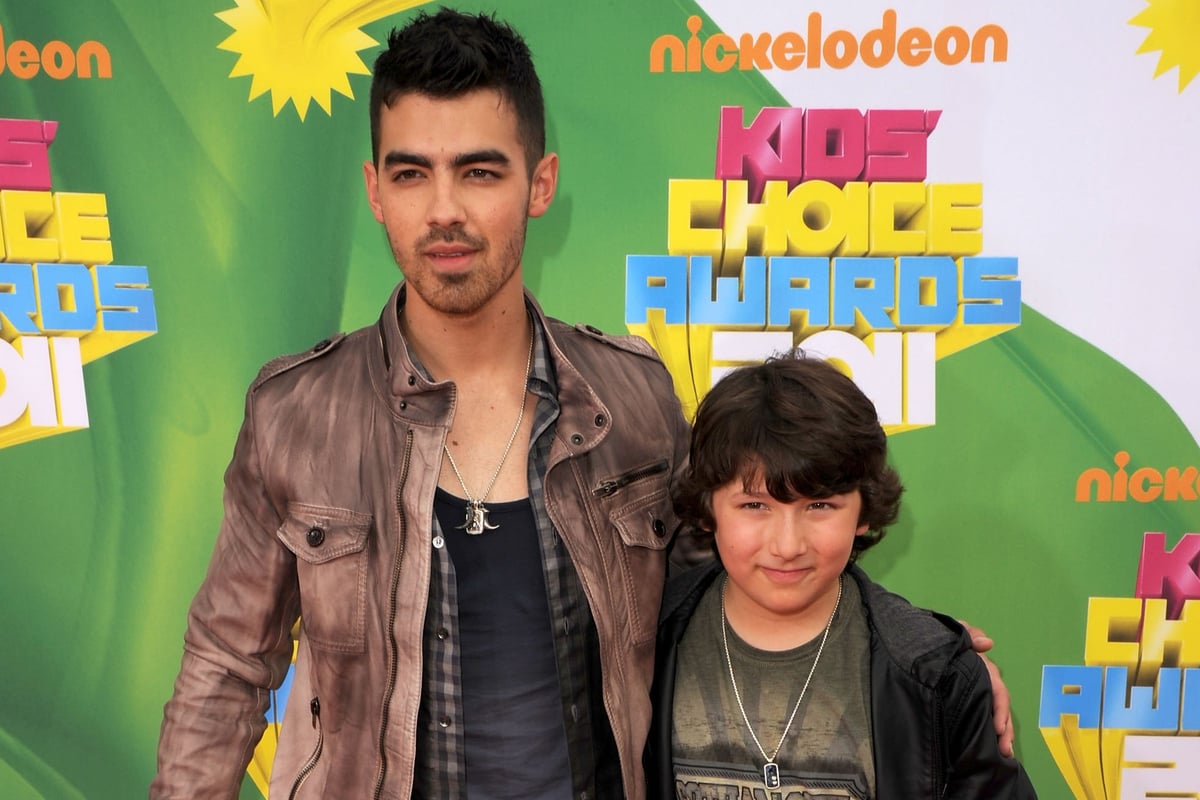 He has appeared as himself in the Jo Bro's concert films and documentary Chasing Happiness, and on Kevin and wife Danielle Jonas' 2012 reality show Married to Jonas.

In January 2021, Frankie told Paper Mag that growing up in this weird environment - being adjacent to fame but not quite famous himself - left him with "weird feelings about being in the public eye".

Though unsurprisingly, Frankie has also dabbled in music. Since 2017 he has posted a couple of tracks on SoundCloud, and he's got a degree in audio engineering. 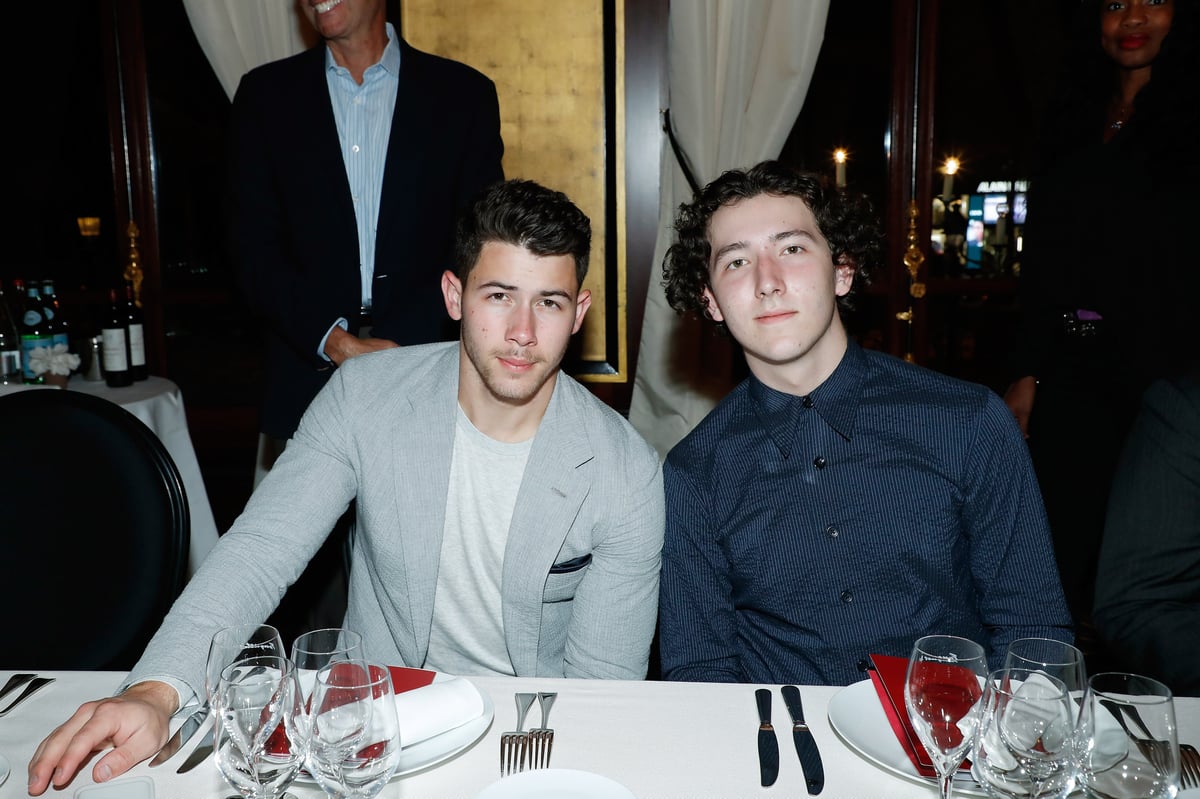 In 2018, he told CelebMix his brothers had been a huge influence on his music.

"They've been a really big influence on my whole process, helping me through it, being there to say try this, try that," he said.

"The one thing they've told me was most of all to keep at it, because if you love it, then nothing else matters and that's true, if you love making music then just continue doing that."

And throughout his entire life, he's roasted the s**t out of his older brothers - which is partly the reason Frankie has become such a beloved internet figure in the past couple of months.

The Jonas family is obviously really close knit - and they definitely enjoy taking the p*ss out of each other.

Before we get to the recent fame, this is some of Frankie's early work: 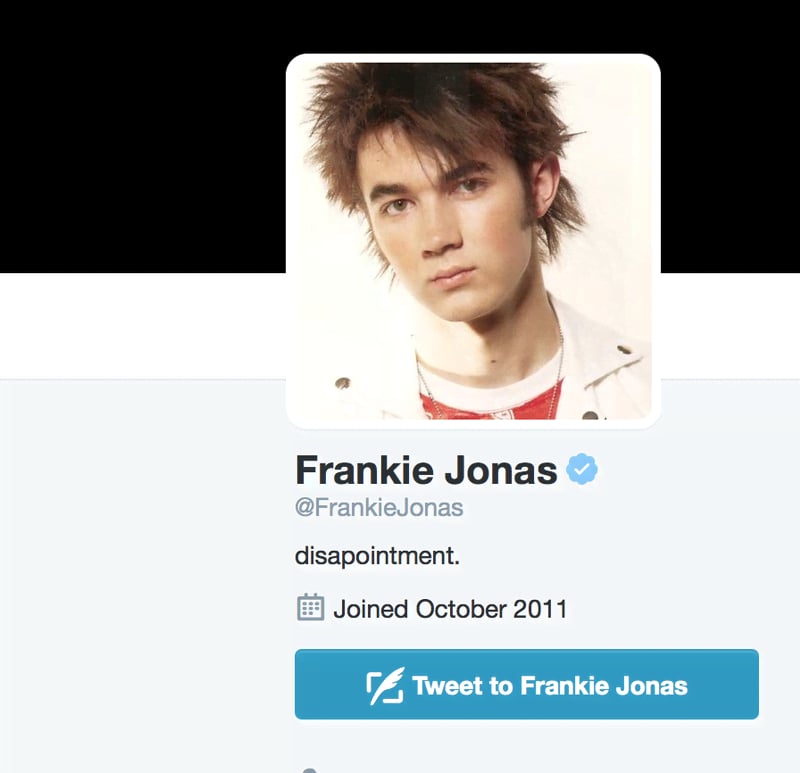 This is just really funny to me. Image: Twitter.

More recently, Frankie has begun to rival his brothers' popularity thanks to viral TikTok videos - many of which poke fun at his 'Bonus Jonas' identity and his brothers.

He joined the app back in October and in the span of only a few months, Frankie has amassed 1.8 million followers and almost 40 million likes.

It's down to some fantastic self-deprecation and just generally chaotic content, like a video where he shows himself giving himself a tattoo in his girlfriend's parent's basement - with zero context as to why.

In one of his most successful videos, he recreates some truly ridiculous scenes from Married to Jonas:

And his followers are... very passionate, and in on the gag.

They recently flooded the TikTok comments of his brother Nick - who has probably always been the most famous Jonas, let's be honest with multiple variations of "Omg, you're Frankie's brother".

"The biggest 'Oh, sh*t' moment of this whole thing was the night that [Nick posted on] TikTok, and his comment section was filled with people spamming him saying, 'Aren't you Frankie's older brother?,'" he told Paper.

"And I just sat there, I didn't sleep all night. So I was like, 'Wait, I had nothing to do with this. This is completely out of my hands.'"

He responded to the comments with another video, of course:

Eventually Nick responded with his own video showing his... displeasure with the turn of events.

"Joe, Kevin, forget what I said about letting Frankie in the band," Nick said.

But with his following growing daily, it doesn't seem like Frankie needs the band. Sorry, Nick.

"We have a really close-knit family, and I think everything has just been attempted to be in good taste and with the eyes of fun," Frankie told Paper.

"But they kind of love it. I mean, they're excited for me that I'm enjoying myself. The whole thing is exciting... So I'll generally just continue to make a fool of myself on the internet as much as possible, and for as long as people are willing to laugh at my burps and my farts and my twerks and my shitty Gen Z humour."

Hopefully, he'll have plenty of time for TikTok during his study.