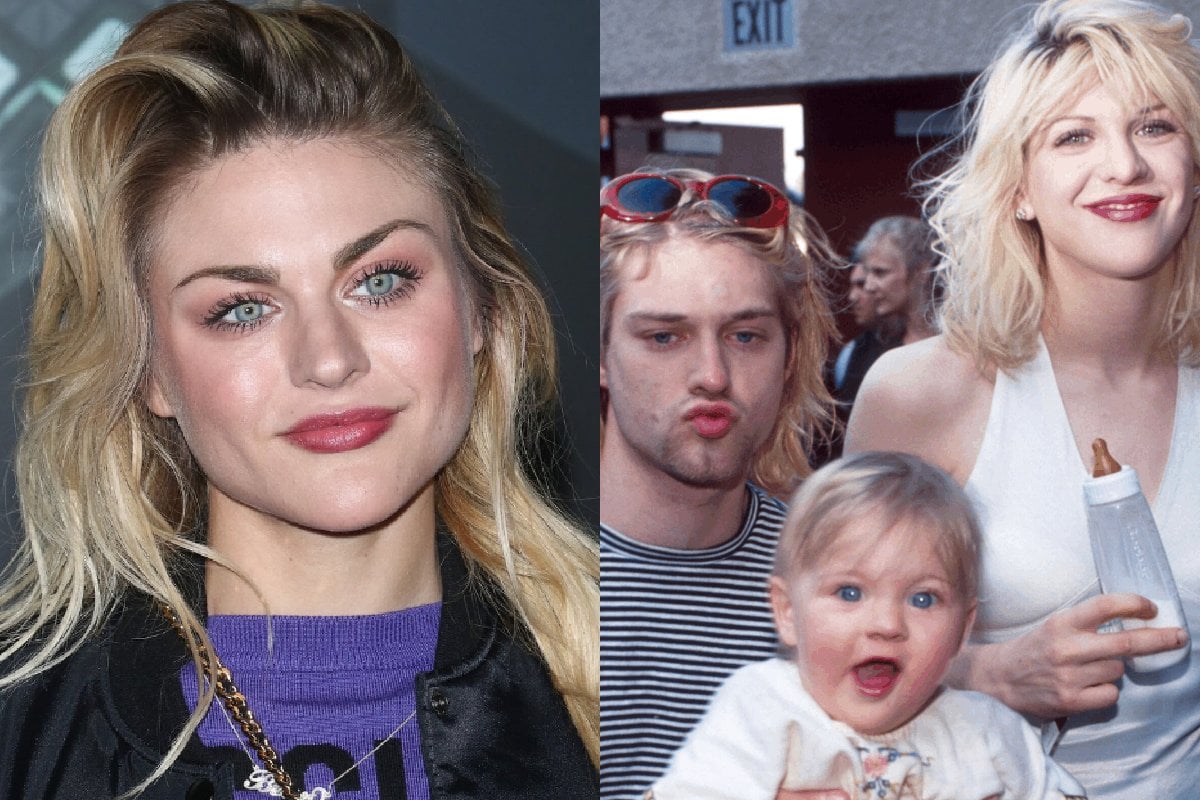 This post deals with drug addiction, domestic violence and suicide, and might be triggering for some readers.

Frances Bean Cobain is the daughter of rock royalty.

Her late father is Kurt Cobain, the legendary lead singer of Nirvana, and her mother is Courtney Love, Hole front woman.

Cobain and Love were '90s icons who experienced a lot of controversies that played out in the media.

Almost 30 years later, Frances is all grown up and living quite the life of her own.

Here's everything we know about Frances including her tumultuous childhood, the impact of losing her famous father at a young age, and her new boyfriend whose father is also quite familiar.

Watch: Kurt Cobain and Courtney Love at the MTV VMAs in 1993. Post continues below.

Before we look at Frances, let's unpack the relationship between Kurt Cobain and Courtney Love.

Reports from various articles and books put their first meeting between the mid and late 1980s. According to the book Come As You Are: The Story of Nirvana by Michael Azerrad, they first spoke after one of Cobain's concerts at a Portland nightclub in 1989, and were both immediately struck by each other. Love described him as "beautiful" and Cobain said Love was "a classic punk rock chick".

Love had been a long-term drug user by the time she met Cobain, abusing prescription drugs and dipping in and out of heroin. Cobain says he had dabbled in heroin long before meeting Love. 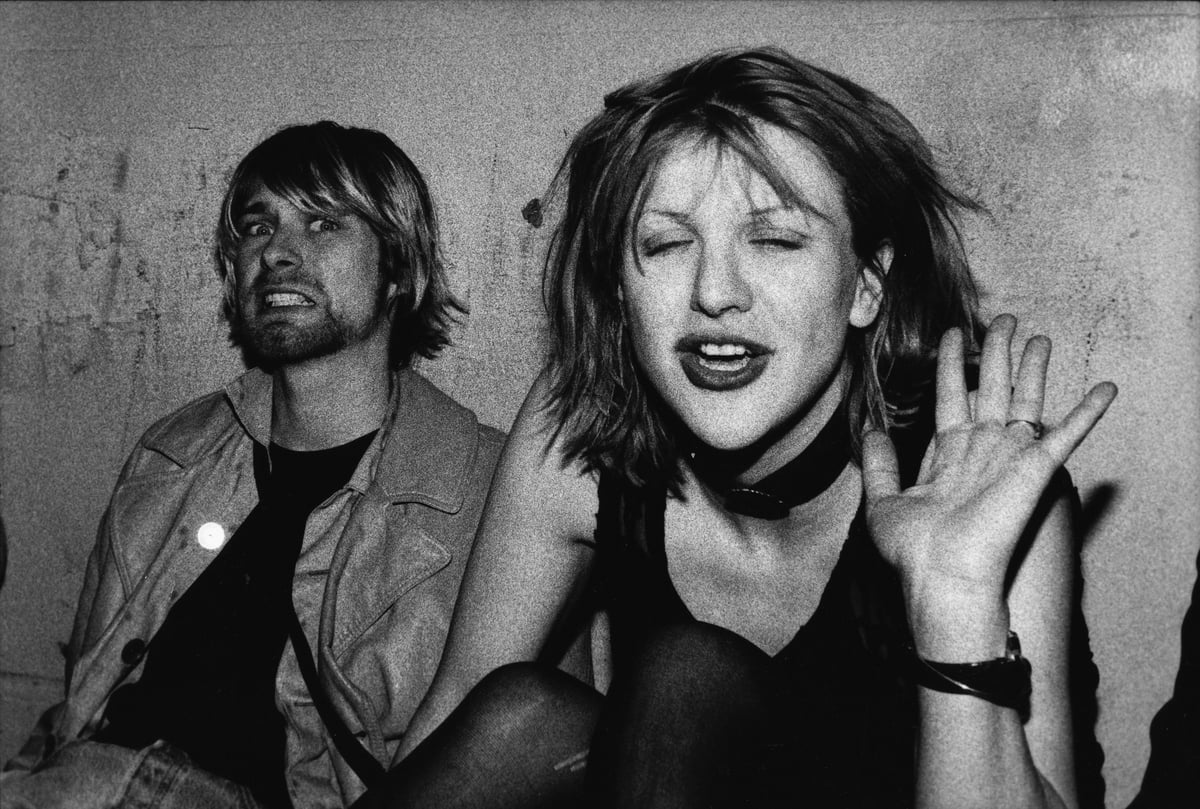 Kurt Cobain and Courtney Love in 1992. Image: Getty. In early 1992, Love discovered she was pregnant. A Vanity Fair article suggested she'd been using after learning of the pregnancy - a claim that generated a media firestorm which she has since firmly denied.

Love said to Vanity Fair in 1992: "We did a lot of drugs. We got pills, and we copped some dope. Then we got high. After that, I did heroin for a couple of months."

Listen to Mamamia Out Loud: In this episode, the ladies discuss Nirvana's Nevermind album and its controversial cover art. Post continues after audio.

The couple married in Hawaii in February 1992.

In August 1992, Frances was born. But the coverage of her parents' heroin use attracted the attention of child protective services who took the couple to court alleging they were unfit. After a seven-month fight, the famous couple retained custody of Frances.

Frances was then raised between Seattle and Los Angeles by her mother, aunts and paternal grandmother at various stages. 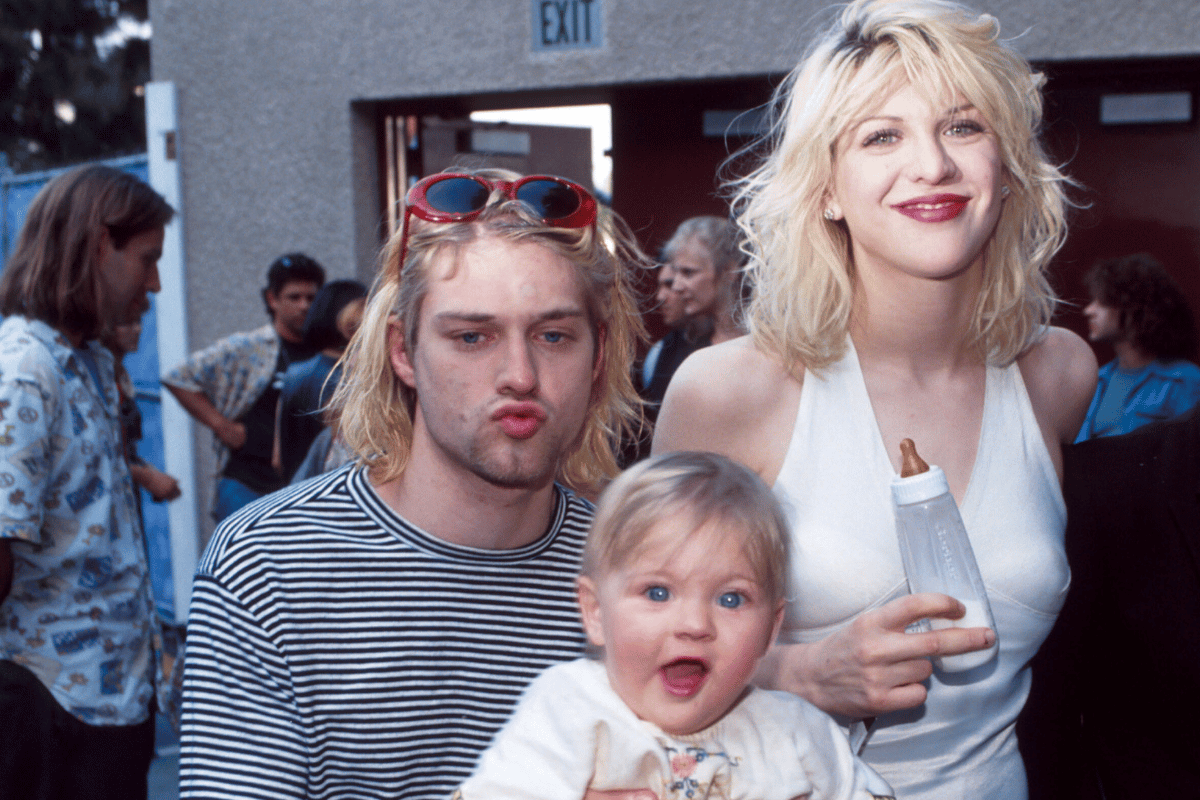 After a brief period of detoxing, Cobain continued using.

After an overdose in Rome in March 1994, which Love later told Rolling Stone was Cobain's first suicide attempt, she staged an intervention involving 10 friends and colleagues. In early April 1994, Cobain died by suicide at 27.

Frances was only 18 months old when her father passed away.

In a podcast episode of RuPaul's What's the Tee? Frances said she wasn't told of her father's suicide until she was five. The decision was made by her mum who sent her daughter to therapy a year before so she could be "eased in" to the conversation.

The worldwide devastation around Cobain's death, even years later, has stayed with Frances, her father's legacy follows her.

"I was around 15 when I realised he was inescapable," she said to Rolling Stone.

"Even if I was in a car and had the radio on, there's my dad. He's larger than life. And our culture is obsessed with dead musicians. We love to put them on a pedestal. He inspired people to put him on a pedestal, to become St. Kurt."

As for the relationship between Frances and her mum, it's been rocky to say the least.

In October 2003, Love was arrested for drug-related offences, which saw her overdose on painkillers hours later.

The incidents caused Love to lose custody of Frances Bean again, only to regain her two years later. By December 2009, Love again lost custody, this time as a result of "allegations of domestic violence". 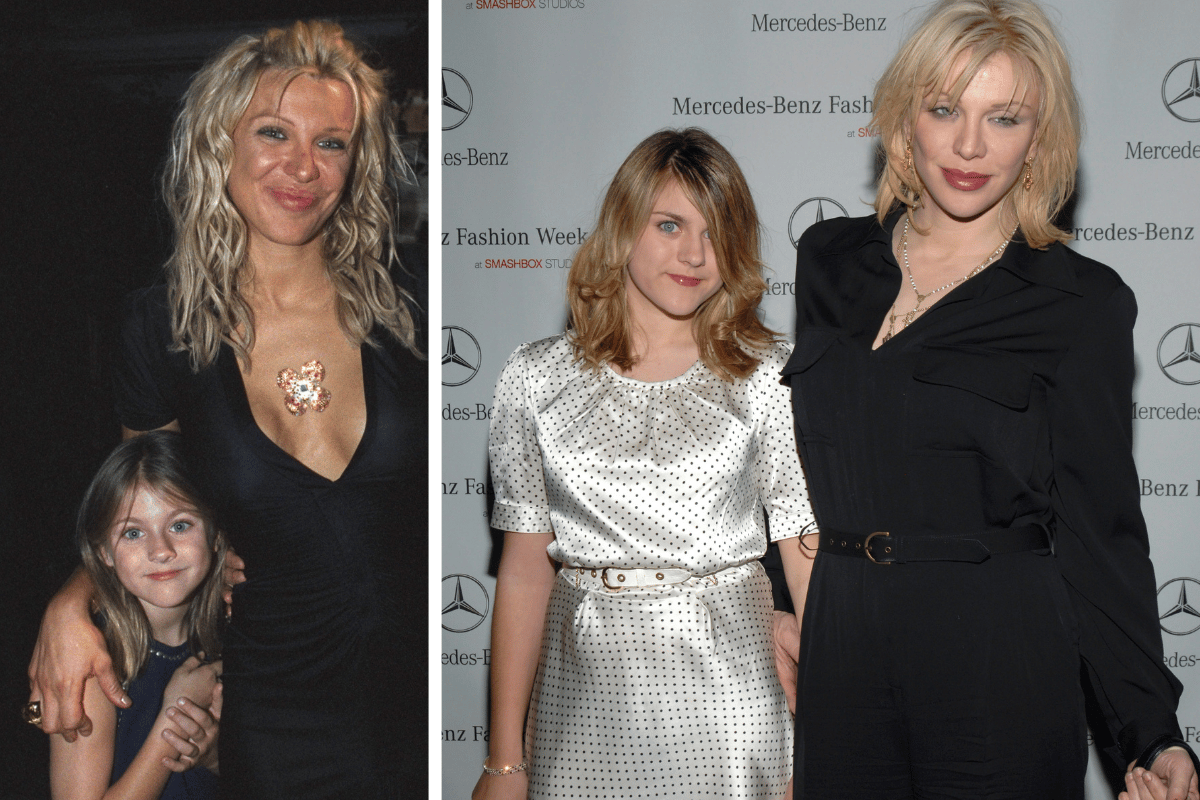 Image: Getty. When asked about her relationship with Love, Frances said to RuPaul: "When she is on a right and healthy path she is one of the most fulfilling, beautiful, intelligent, kind people that I have ever met."

In 2014, a then 23-year-old Frances married her boyfriend of five years, Isaiah Silva, in a small intimate wedding. Interestingly, her mother wasn't in attendance.

A year later, the mother and daughter reconciled when they appeared together at the premiere of Kurt Cobain: Montage of Heck, a film about the late Nirvana frontman which Frances produced. 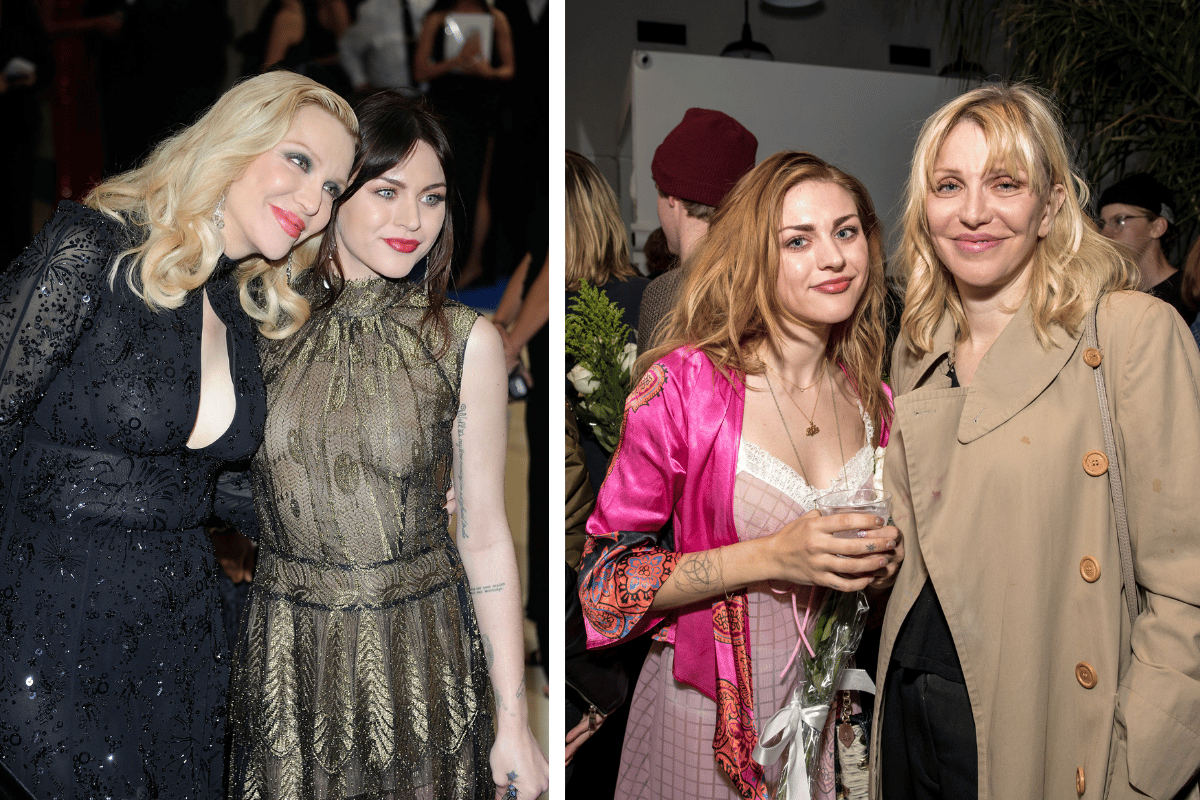 The pair together in 2017 and 2018. Image: Getty. Frances is now in control of her late father's estate, which is believed to be worth around AU$220 million.

"My relationship with money is different because I didn’t earn it," Frances said to RuPaul.

"It's almost like this big fat loan that I'll never get rid of, and it's almost like I have this foreign relationship to it or like guilt because it feels like money from somebody that I've never met, let alone earned myself."

Frances says she only took responsibility for her finances after getting sober in 2016 and splitting from her husband. She has never revealed what substance she struggled with.

"It took me stepping away and getting sober to realise that no matter how much money you have, it's not permanent."

As mentioned previously, Frances was married to Isaiah Silva from 2014 to 2016. After two years together the pair divorced, which ignited money trouble between them over one of Kurt Cobain's famous guitars.

At the time, Silva claimed the million-dollar instrument was gifted to him as a wedding present, which Frances denied. An insider told Page Six Silva had a "frightening obsession" with Cobain and was waging a "campaign of terror" against the family. The guitar was eventually handed to Silva and later auctioned off for AU$8.4 million.

Now five years after her divorce, Frances has announced she has a new partner.

In January 2022, Frances returned to Instagram after a year-long break on her socials, which she credited as being "exceptionally good for my mental, emotional and spiritual health".

She wrote: "2021 brought me more into the present moment than I've ever been, which I'm deeply grateful for. I wanted to share a few moments that were captured / created this past year that brought me a great amount of joy. Here's to hoping everyone's 2022 is filled with authentic connections, a lot of warmth and profound discovery of self."

And it appears one of the things Frances discovered is a love for Tony Hawk's son, Riley. Tony Hawk is an American professional skateboarder and entrepreneur, who was at the height of his fame in the '90s, just like Frances' parents.

In a gallery of photos along with the caption, Frances shared photos of her and Riley together, her new boyfriend commenting underneath the post: "Happy New Year my love".