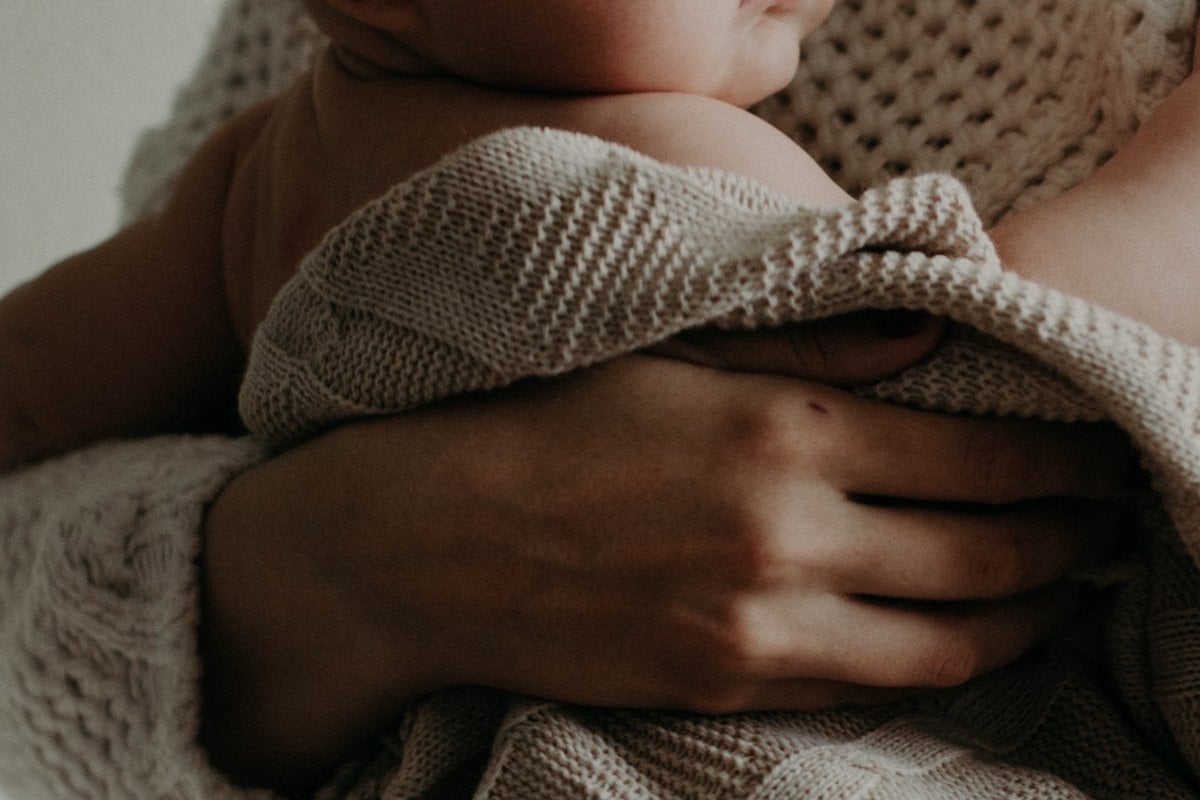 I pressed the red 'end call' button and already I had fallen in love.

It was not dissimilar to the sudden onset of hope and excitement at the appearance of double lines on a pee stick. Only this time, I had just 10 minutes until your arrival. Only this time, I knew for certain I would also lose you.

It was another beginning, in a sea of endings. There had been no name given, no gender, nothing offered about the world in which you were leaving, in order to enter mine.

All I could do was assume and set out to prepare.

Watch: This is the reality for Aussie kids living in foster care. Post continues below.

Smaller nappies, formula. Where did I put that stash of baby clothes?

I wondered for a brief moment about the lessons this one would bring. For in the end, there are always lessons. Each one brings their own.

The sun was bright as I lifted him out of the unmarked car. A brief exchange with the suits who could offer me little additional information about him. I turned him over in my arms, carefully, for there was more fragility than I had fore planned. More pain than I’d calculated.

I looked into his eyes, but they weren’t looking. They were far away. The pain - it was coming from there. Coming from the beautiful, but vacant, big, brown eyes, that had no preference for looking at me.

He was tiny, and already a product of systemic failure. But, he is here now. Here in my world. He is safe. Together for now.

I knew all too well what my job was now - to love, almost blindly, knowing it can all end in an instant. And so that’s what I did. I loved; hard.

My children followed my lead; they affectionately named him Wombat.

As tricky as it was in the early days, with hospital visits, tests, a brain scan, sleepless nights, checking for breath, checking for pulse... each night that he slept, skin on mine, we learned about each other. We got to know each other’s hearts. I listened to the thumping of his, and I sang along with it, even though it was unfamiliar to me.

I felt his hot breath touch my face, and as I breathed in, I imagined filling my body with all that he was.

Slowly, the screams of pain had turned to calls of curiosity, babbles of wonder. He was healing. He could co-regulate. He could giggle, he could play. He had formed a secure attachment to me, and also to his newly acquired siblings.

Siblings who ensured he knew what it was like to be kissed almost violently, because we all wanted nothing more than to show him that he was just so entirely perfect. 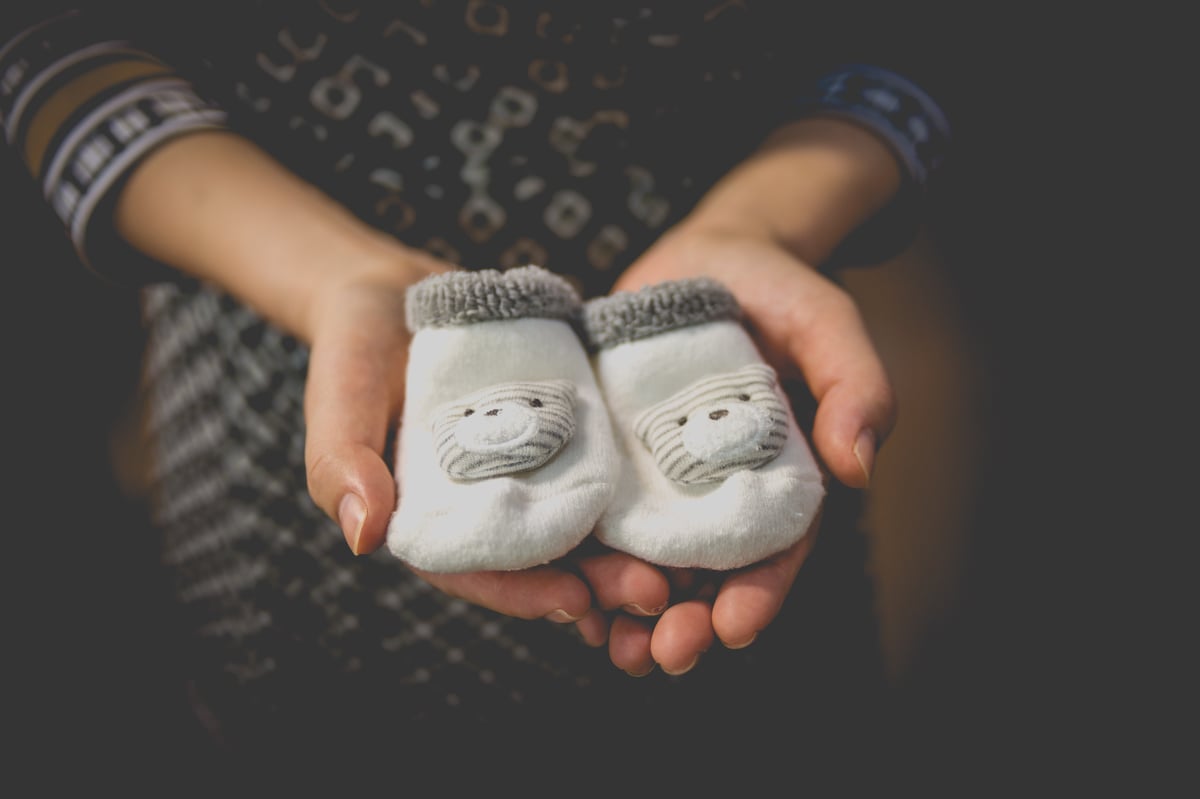 There was something else. There was a look that he developed - one that he gave only occasionally - and he only gave it to me.

It was different, spreading across his face when he paused his play and realised I was looking at him, or when he woke from a deep sleep and saw that I was there, or when he saw me exaggeratingly roll my eyes at his insistence of throwing cut up apples off his high chair.

The look is permanently etched in my mind and it made every uncertainty about his life, and ours, worth wading through.

From the safety of my world, I could only just see Wombat’s. There was a thick fog surrounding it, and I couldn’t recognise much beyond that.

I could only assume what was there.

Wombat was able to have some connection to his world, and although it was brief and awkward for his family, they appeared to celebrate him - trying, as best they could, to connect with him even though he was no longer a part of their world, in the way that he once was.

During these visits, I noticed something special about Wombat’s Dad.

It was in the way his voice cracked when he spoke to his young son, the way his body seemed to melt when he was holding him. His words and song in language flowed off his tongue and into Wombat’s brain and body like a melody of medicine that only he could provide.

Then they would leave, in the opposite direction, and we would go home again.

The separateness and the disconnect was evident, but it also just came with the job.

It had been some time since Wombat had seen his Dad.

I phoned the prison where he now resided, and organised a visit. The visit was to take an hour. I briefly wondered if this was too long, if Wombat would be distressed, if I should cancel.

He’d had a runny nose that past week and was particularly clingy. He wasn’t sleeping so well, and the usual cheeriness to his eyes was yet to return.

Maybe I'll leave it until next week, when Wombat is sure to be in a better mood. Something was telling me I needed to do it, anyway. I took him to see his Dad, and I was completely unprepared for it.

We had arrived early, and Wombat was fine. Not super happy, not completely grumpy, just okay.

He played happily with his dolly in the waiting room. Again, I wondered how Wombat would go, with his Dad for an hour.

His Dad entered the room, unaware of who was there to visit him. I saw him first. He was in a slump, shoulders hunched over, appearing to not particularly want to be there.

The officer directed him to my table, to the table of his visitors.

He stood, looked over, and I heard a little yelp come from somewhere deep in his body. He had realised his son was there. I smiled and looked down at Wombat. I turned him around, to face his Dad.

A whisper in nervous excitement, "Look baby, there’s Daddy! Daddy is coming to see you". And the look on this child’s face floored me.

The moment Wombat saw his Daddy, I felt a powerful surge running through his body. He looked at his Dad in a way that I recognised.

His eyebrows raised only slightly, one more than the other, and his mouth opened, quickly forming a smile in which his bottom lip stuck out ever so slightly. His heartbeat was loud.

I recognised the look, because it’s normally the one that he saves for me.

It was at that moment that my world began to shake. It was rumbling, moving. Something within it had been stirred, and I had to focus to stay upright.

I looked around me and in every direction I could only make out layers of frightening, complex emotion, for which there were no answers.

I was suddenly reminded of who I am - a white woman, in a world completely separate to Wombats' and Wombat’s whole story is just my narrative.

The pain and trauma that I assumed he came from may indeed be factual, but I was forced to acknowledge the parts of me, the people over in my world, who have played a role in the defeat of this man, his Dad.

While he holds his son from within the thick walls of a prison, I was called to admit that he, too, is just a product of systemic failures.

Like father, like son. And for now, their hearts beat together. Wombat loves his Daddy. Not any more or any less than he loves me, but the love he has for his Daddy is in context; it was created in his world and won't diminish over time, even if they are apart.

Regardless of my experience and education I do not, and will never have authority to speak on Wombat’s territory, to speak about his story, to assume that he would prefer to live in my world, over his.

So happy, he fell into a deep sleep in his Daddy's arms. The tears were falling freely now, onto my baby Wombat, onto a father’s little boy. This is where this child really belonged.

And finally, we return home.

And that night, I told him.

I’m not here to keep that look you give me, Wombat.

You might have learnt it with me, but go ahead and give that one to your Daddy now baby.

These days, I can see Wombat’s world just a little clearer. I can make out a few things that are on it, and in it.

They are beautiful things. His world is beautiful. The fog has cleared slightly and I’m working on it.

And I accept the lesson Wombat brought with him, into my world: That it’s not actually about loving you regardless of knowing I will end up losing you.

We were in a supermarket car park a few weeks ago, loading bags into the boot.

Wombat was sitting in the chair of the trolley, playing with his dolly, dribbling as he sucked on its arm.

I heard the gravel move under the foot of an elderly lady as she came near us. Her gaze was intent on Wombat, but then she looked up at me and smiled, her cloudy eyes glistening in the daylight.

In broken English, she had something to say: "I know that little boy. And I saw you with him in the shop. Thank you for loving him. Watching you [with him] helps my heart."

The conversation was short, but it was felt deeply by us both. She smiled again and began to walk away, in the opposite direction, back to her world.

I felt Wombat’s heartbeat on my shoulder, thumping away. He had liked the interaction. And so we journey on, together for now.

Reply
Upvote
1 upvotes
Thank you for this beautiful article, I’m in tears. This little boy is clearly so loved by so many.
T
thecontessa 2 months ago