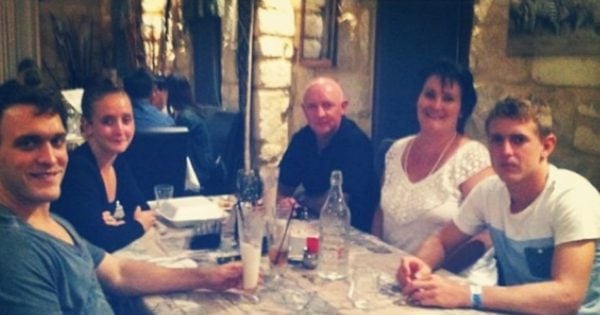 Thanks to our brand partner, Key Assets

Mandy Jones and her husband Malcolm have witnessed more hardship than many.

The married couple spent the majority of their lives in Zimbabwe, their home country, where close to three-quarters of the population lives below the poverty line.

“We have seen the utmost deepest poverty you can possibly find. We know there is so much need in the world out there,” Mandy, 46, says.

Years later, after moving to Australia, this acute awareness would drive them to open their home to foster care.

The Joneses migrated Down Under with their three children – Shaun, 25, Bronwyn, 23, and Jonathan, 18 – in 2007. First, to the blistering hot northern WA town of Carnarvon before settling in Two Rocks, 40 minutes up the coast from Perth.

It was then, just over two years ago, that the couple began exploring foster care. The time was right.

Their three kids were blooming into healthy, happy grown-ups, with their third on the cusp of adulthood.

And logistically, they found themselves a perfect fit for fostering. Malcolm, 51, works from home in his field of agronomy, giving him more flexibility to help with cooking, bathing and school drop-offs.

Meanwhile, Mandy decided not to return to work in child education, previously as a special needs teacher, to instead devote herself to being the primary foster carer.

“We had a spare room in the house, my husband and I had each other’s support. We’d given our kids the opportunities they needed and it was time we gave someone else the same opportunities,” Mandy says.

“Our children thought it was fantastic, having also had their eyes open to the hardship in Africa.”

They signed up with the foster care agency Key Assets, providing them with all the training and support they needed as they embarked on their new journey.

Then, along came the boy who would forever change their lives: Tyler.

Tyler has cerebral palsy and a developmental delay. At four years old, he couldn’t speak, he was still in nappies, and he wore splints permanently to move around. He couldn’t even hold a spoon.

“He couldn’t sit still, he was so hyperactive. He’d never had any training in using the toilet or feeding himself at all. He was like a baby at four years old,” she says.

He needed love and attention, and Mandy and Malcolm gave it to him in spades. Two year later, Tyler is a completely different little boy.

Not only does he walk, but he runs, swims and plays all sorts of sports. And he's one heck of a chatterbox.

At age six, he has the mentality of a three-and-a-half year old – an age that Mandy jokes keeps she and her husband on their toes.

Of course, it hasn’t come without its challenges. Tyler has needed a lot of help and frequent hospital visits to get to where he is with his speech and mobility.

Teaching him to walk without his splints was a huge hurdle.

“Without the splints, he’d walk on his toes. But we have a massive trampoline and I learned that trampolines and cerebral palsy are best friends. He bounced all day, every day, and it strengthened the muscles in the back of the calves where the problem was,” she says.

“Now he can walk fully. You wouldn’t think he has cerebral palsy.”

When he first arrived, his speech was so impaired he just made noises. Today, he speaks a lot – and the Jones family is stoked with his progress - but Mandy says he talks exceedingly loud and fast.

“Sometimes you find yourself having to repeat things 10 times a day, it demands patience.”

But it is overcoming these challenges that has made foster caring such an enriching experience: seeing Tyler's transformation has been remarkably rewarding.

“When he first arrived at our door he was like a sad, little blob and now he’s the happiest little boy. He has improved leaps and bounds in every way, from speech to walking. He’s even learning to read at school. Just everything," Mandy says.

It is clear that the whole family adores him to bits.

“He’s got us all wrapped around his little finger," she says.

Mandy says she encourages anyone with the capacity, the support and the willingness to begin foster care, to jump in with both feet.

“Before you foster you are nervous because you don’t know what you’re getting into. But you will cope. Once you have the child, you get on with it as though they are your own," she says.

"We were nervous before we fostered. But it’s been the best thing for both of us.”

Mandy has loved the experience so much that she now wants to foster a second child. She hopes soon to have a baby living in her home alongside Tyler.