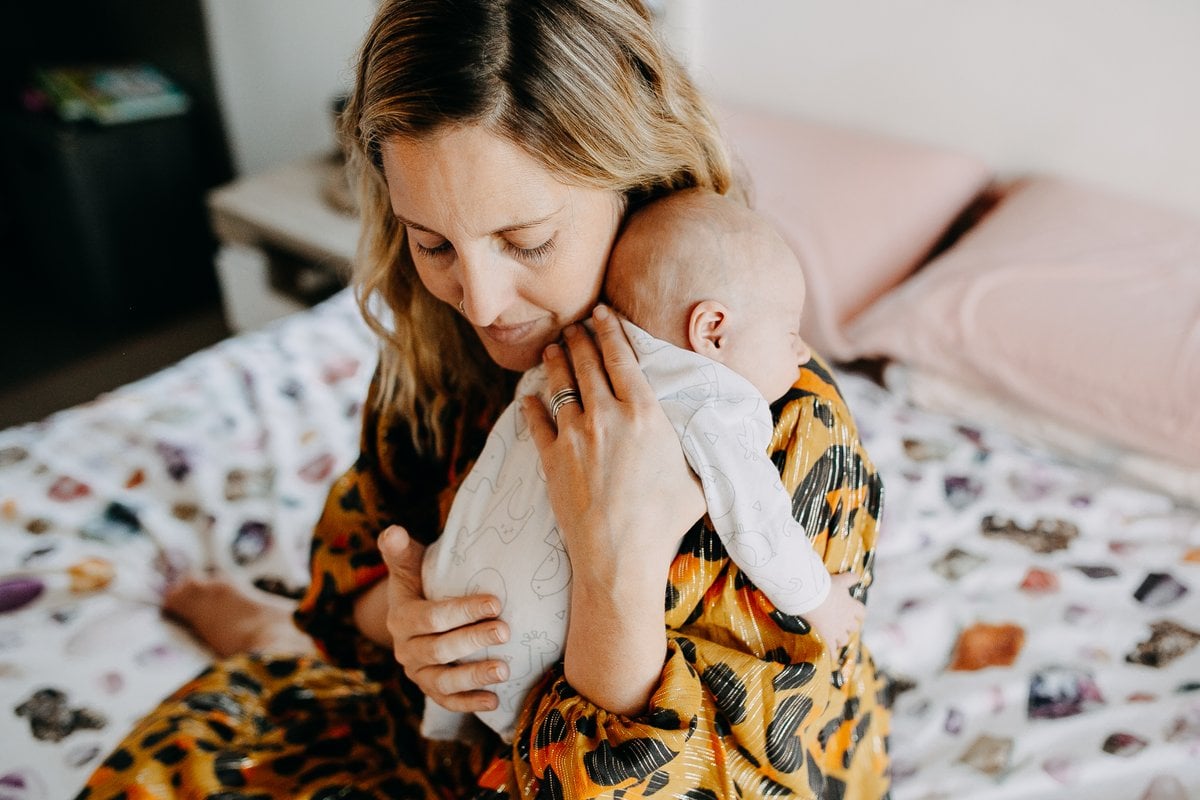 In March 2020, I was seven months pregnant when I said goodbye to my parents at the train station. They were meant to be in Australia for another four weeks before going back to the UK, but their airline had recommended they catch an earlier flight.

We hugged and cried, as they kissed my growing belly. I’ll never forget their blissfully naïve words: “We’ll be back right after the birth”.

It's been more than one year since the Federal Government closed Australia's international borders, and the emotional toll is hitting Australians with loved ones overseas. On this episode of The Quicky, we examine how long this might go on. Post continues below.

Since my first child was born four years earlier, my parents have spent four months of every year in Australia, offering logistical and emotional support, as my husband often travels with work. In Australia, approximately 800,000 grandparents assist with grandchild care each week. According to a recent article in the New York Times, research has found that 'intergenerational care' "may be the key to thriving mothers and children".

As the pandemic ramped up, I remember saying to my partner: “If it gets close to our baby’s first birthday and my parents still haven’t met her, we’ll have to go back to England.”

It was an empty promise, as I never thought that we’d have to - and then the date got closer and closer.

A week ago, I sent a message to my husband’s family, who don’t live in our area: ‘We’ve decided not to have a first birthday party. We don’t want to celebrate without my parents.’ The idea of blowing out candles and taking photographs with two empty spaces, for two missing grandparents, makes my heart ache.

Like 30 per cent of Australians who were born overseas, and over 60,000 Australians who have signed a petition, my family has been torn apart by Australia’s definition of ‘immediate family’ when it comes to travel restrictions and exemptions.

The Australian Border Force (ABF) says the definition of immediate family only applies to spouses, de facto partners, dependent children and legal guardians of citizens or permanent residents. Because of this, parents of Australian citizens cannot enter the country, even if they are vaccinated and happy to quarantine.

Since borders closed, I have been reluctant to become a spokesperson for this issue. I’ve turned down multiple requests from newspapers asking me to write articles on the subject. I’ve defended the border restrictions to critics. I have been thankful it has enabled us to keep COVID-19 cases to a minimum.

To this day, I am completely in support of restrictive travel and the hotel quarantine program. I still believe entry to Australia should be granted on a case-per-case basis. However, the cases which are approved and those which are denied, seem to lack all logic, empathy and compassion.

When my baby was six months old, I needed surgery on my dominant arm, which meant I needed physical help caring for our children: Exemption Denied.

As a result of several health scares, my mental health declined (I have health-related PTSD from the death of my first husband). I applied for an exemption on compassionate grounds: Exemption Denied.

Every week, I receive messages from people in my situation who have far more grave circumstances than mine: Exemption Denied. Meanwhile, celebrities seem to float across the border, whether or not they are Australian citizens.

We are the lucky ones, we are repeatedly told, and in many ways we are. When I look around my local area, there is barely a sign of the pandemic, aside from a few germ posters stuck on the side of rubbish bins.

However, there is an invisible heartbreak felt by many people, especially parents, who are raising children that overseas grandparents may never meet - that is the cold, hard truth if border closures continue indefinitely. 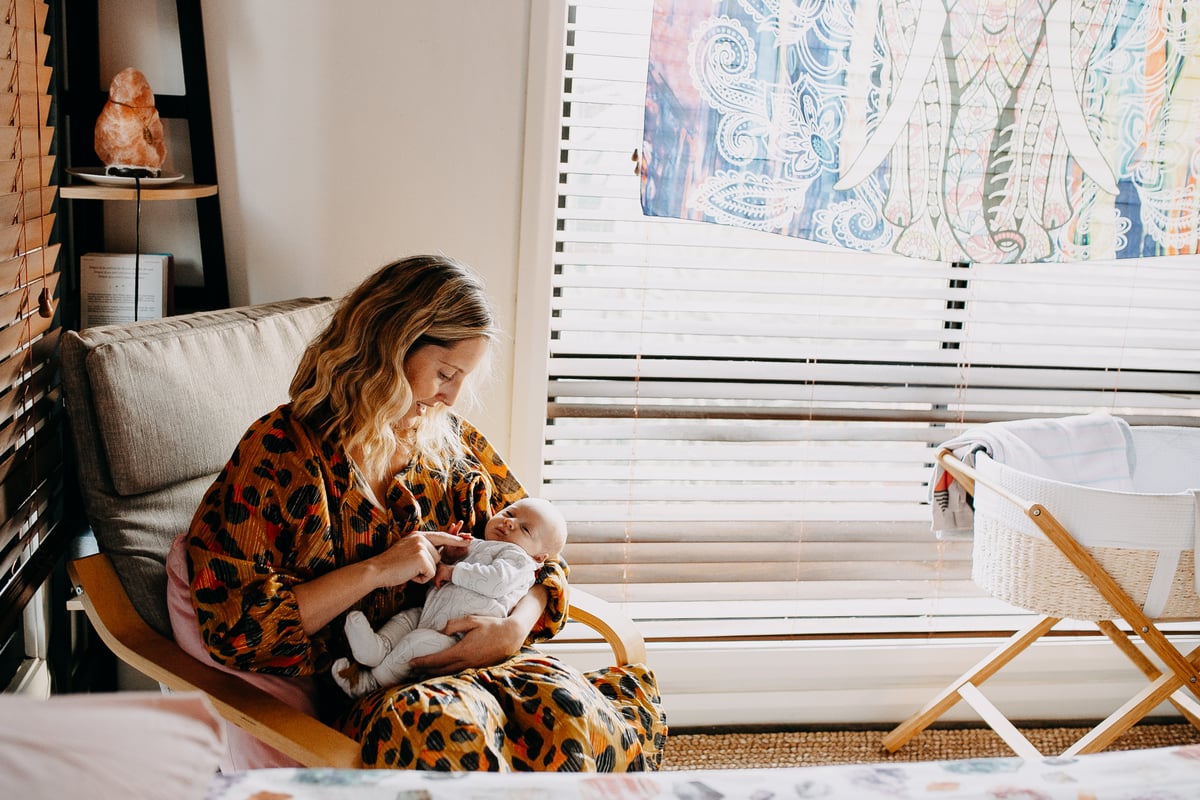 Every day, I count my blessings and attempt to accept what I cannot change. However, it is also time that I - and people like me who chose to call Australia home - label this feeling so that we can begin to heal it. This is grief.

Grief that we will never get this time back again. Grief that my parents will never hold my chubby, wiggling baby. Grief that she’ll be a walking, talking child who only knows them as a face on an iPad.

More than that, I feel grief because, as a mother, my wellbeing feels so devalued. In the UK, mothers with children under one-year-old were allowed to connect with family during lockdown because they were seen as vulnerable.

Every time I submit an exemption, I imagine someone in an office denying it because: ‘She’ll be fine!’ It feeds my insecurities that I shouldn’t need help: I should be able to do it all myself; I should be tougher and more resilient.

At least one in every five women experience anxiety, depression or both during pregnant and/or following birth. Sadly, I predict this figure will rise due to family fragmentation. I worry that women won’t seek help because of the underlying message: why aren’t you strong enough to deal with this alone?

I am grateful that my children live in 'Fortress Australia' where they can play in the park, go to the shops without masks and live a full, free life. But I feel grief that I am a mother living in this country right now - physically safe, but emotionally more vulnerable than ever.

R
rache.ray a year ago

Reply
Upvote
Love to you. So many griefs, so many stories. Thank you for sharing yours. Gosh it must have been a hard year. How sweet it will be when they come! 💜
K
kim.l.dobson a year ago

Reply
Upvote
2 upvotes
I had my daughter in Brisbane on the 20 June 2020, first child, first grandchild for my parents. My Kiwi mum literally met her for the first time  two weeks ago. My kiwi Dad retires this week and heads over here next week and my Kiwi brother gets here on the 19 June. I felt so isolated and so much grief this past year. I had so much fear and so little support during my pregnancy, birth and after the birth and had so much trouble breast feeding I ended up giving up. I never thought when I had a baby that my family couldn’t be involved. I feel and acknowledge your grief Amy and I hope you can see your family soon. I think Australia has been too slow with our vaccine program, my family in the UK are already vaccinated.
Resources
Very Peri
News
General
Opinion
True Crime
Politics
Sport
Explainer
Entertainment
Celebrity
Reality TV
Movies
TV
Books
Rogue
Royal
Lifestyle
Beauty
Fashion
Weddings
Home
Wellness
Health
Fitness
Travel
Food
Family
Before The Bump
Pregnancy
Baby
Kids
Teens
School
Parent Opinion
Work & Money
Money
Finance
Career
Lady Startup