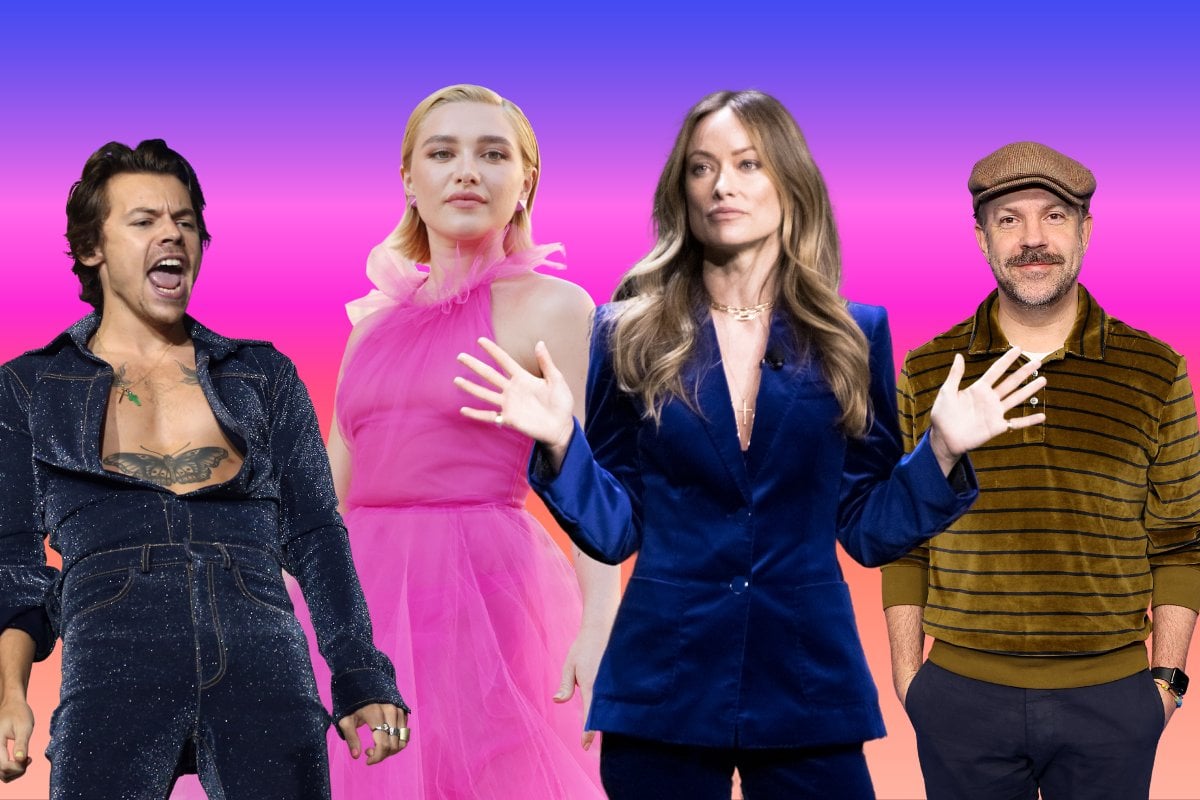 You may have heard rumours about Olivia Wilde and Florence Pugh feuding, while Harry Styles holds Pugh hostage in an utopian community and whispers 'Don't worry, darling' in her ear, and Ted Lasso serves Wilde custody papers live on stage.

Here's everything you need to know the Olivia Wilde and Florence Pugh feuding rumours and their upcoming movie, Don't Worry Darling:

Let's start with the basics. What even is Don't Worry Darling?

Don't Worry Darling is an upcoming (sexy) thriller movie directed by Olivia Wilde. It stars Florence Pugh as a 1950s housewife who is living with her husband (Harry Styles) in a utopian experimental community run by the company he works for. Soon she begins to worry that his glamourous company might be hiding some dark secrets.

Think The Stepford Wives but... sexier.

Watch the trailer for Don't Worry Darling. Post continues below.

OK, this movie sounds brilliant. Why do people think Wilde and Pugh are feuding?

So it all comes back to Harry Styles. Doesn't everything?

Wilde and Styles met on the set in 2020 and allegedly began having an affair while she was still married to Jason Sudeikis aka Ted Lasso.

According to "sources" and also "insiders" the pair were openly hooking up on set and Pugh was not happy about it.

"I can tell you for a fact that Flo seeing Olivia and Harry all over each other on set did not go down well as Olivia was still with Jason when she first hooked up with Harry," one insider told The New York Post’s Page Six.

"Jason and the kids visited Olivia on set at the beginning a few times, so I think this all made people feel a little uncomfortable," the insider added.

Wilde and Sudeikis got engaged in 2012 and they have two kids together - Otis, eight, and Daisy, five.

They separated in November 2020. 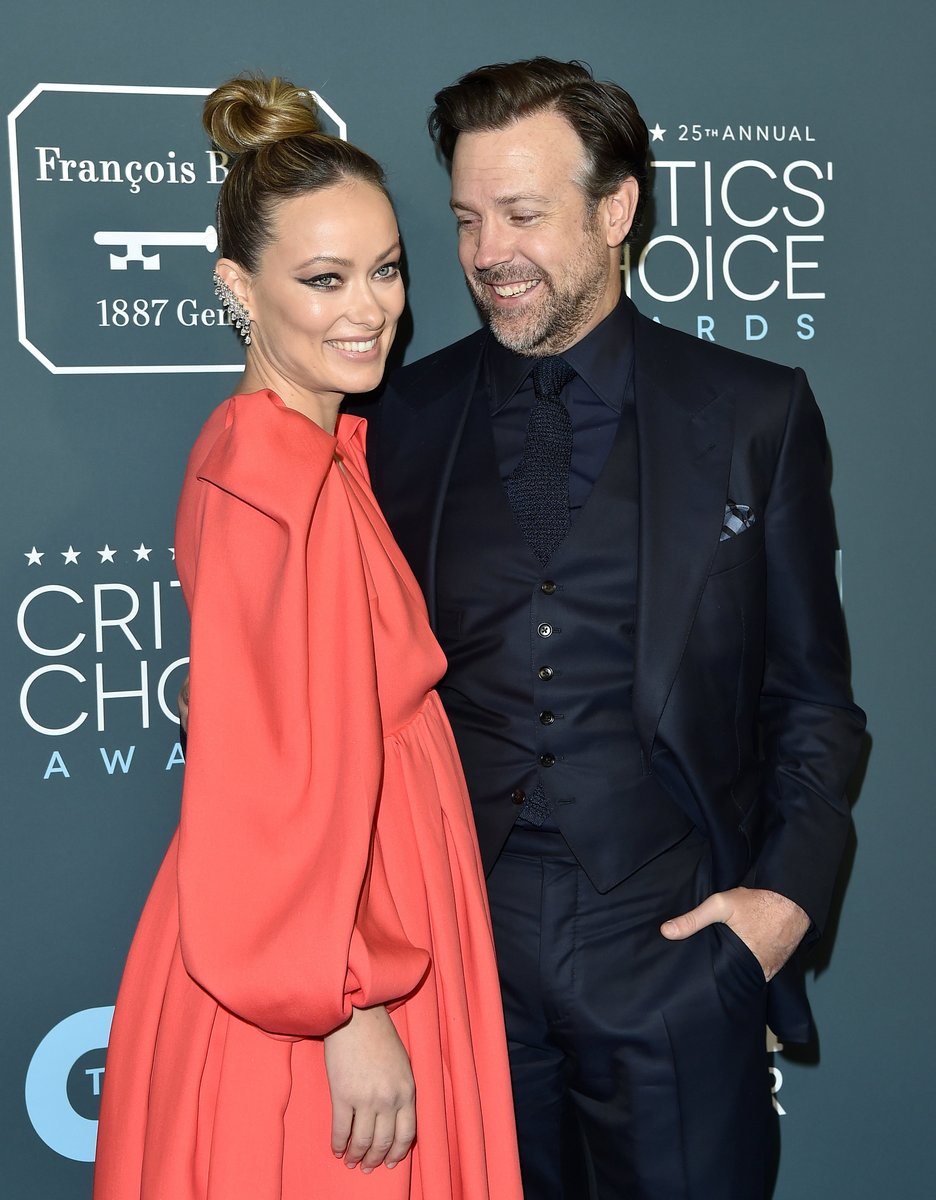 In April this year, Wilde was on stage at an industry event talking about Don't Worry Darling. She praised Pugh and Styles, and talked up her passion for the film calling it a "love letter to the movies that pushed boundaries of ambition" in front of 4,000 industry insiders, media and executives.

Then an unidentified woman walked up on stage and presented her with a manila envelope labelled 'personal and confidential'.

She opened the envelope, read the top page and said, "Okay, got it. Thank you", before returning to her prepared comments, without missing a beat.

But wait.. back to that feud.

Yes, so rumours of a feud have been swirling around for months now.

People stoking the flames of the feud seem to point to two pieces of "evidence".

The first is a submission into the Instagram gossip page Deuxmoi, which claimed that a female director was 'distracted' on the set of her upcoming movie.

"I have it on very good authority that the director was not as involved in 'directing' as it would seem," the source told the page.

The source added the cinematographer had to step in to do most of the work and this didn't sit well with the cast. 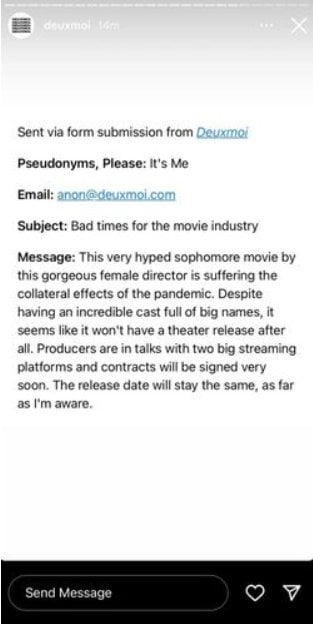 The other piece of "evidence" is that Pugh has been very quiet about Don't Worry Darling, and hasn't posted about it on her social media platforms this year even though she's the star.

On the day the second trailer was released, Pugh posted about Oppenheimer, another movie she's starring in, but made no mention of Don't Worry Darling.

In contrast, Pugh gushed about working with Wilde when the cast was first announced.

"Olivia Wilde just tagged me in a picture *gasp no.1*. Olivia Wilde cast me in a film *gasp no.2* Olivia Wilde is my idol and allowed me to be a part of this fecking incredible cast," she wrote on Instagram at the time.

On the day the second trailer was released, Wilde posted a photo of Pugh on her page, alongside the caption: "Watching this woman work was such a f**king thrill! Cannot wait to show you more".

So, who is Harry Styles feuding with?

So, are Olivia Wilde and Florence Pugh actually feuding?

We know the internet and the media industry like to pit powerful women against each other, so this could all just be rumours and innuendo.

But the fact that neither of them has commented on the supposed 'feud' or made any attempt to dispel the rumours is pretty suss. And at this point this whole side plot is really overshadowing the plot of the movie which sounds pretty bloody great to be honest.

Don't Worry Darling will be released in Australian cinemas in September. Who knows who will be feuding with who by then.

Reply
Upvote
Why I'm glad I'm not famous, reason no 628: nobody is examining my social media and making assumptions about how I feel about someone based on what I haven't posted. It reminds me of how back in the days when ladies carried fans, they were supposed to have used them to send all sorts of secret messages to prospective suitors. I blame Taylor Swift. She puts secret messages about her music in her posts, now people think that everyone is doing it, and in this day and age of the online conspiracy it's getting put of hand! 🧐

Reply
Upvote
At this stage, I'd just be happy to know how to pronounce Florence's last name.
Never heard it spoken.
What? Use the internet?
That might dispel a very cherished theory.
M
maybemaddie 17 days ago

Reply
Upvote
@gu3st I believe it's pronounced as 'pew' like a church pew.
C
cat 17 days ago