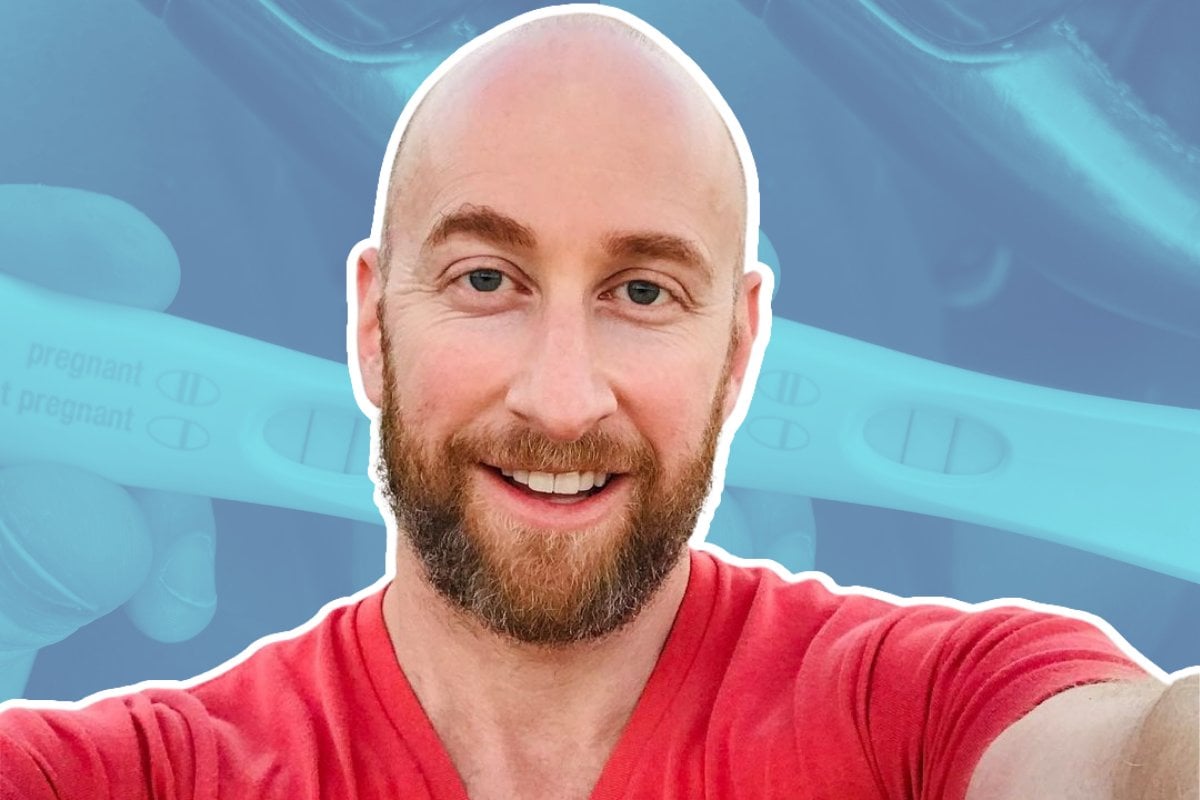 In the 10 day period that followed the transfer of the embryo, Shaun Resnik and Carla Pincombe made a deal: No at-home pregnancy tests to see if she was successfully pregnant. Wait for the blood test on day 10.

But by day eight, Shaun, a 44-year-old Melbourne naturopath and mindset coach, couldn’t take it anymore.

“Okay, you need to go and pee on a stick!” he begged, surrendering to the suspense.

He drove by Carla’s house and left a pregnancy test in her mailbox.

“The eagle has landed,” he texted.

Carla didn’t want to get the hopes up of her three young daughters at home, so she discreetly took the test, popped it in her pocket without looking at the result, and met Shaun at the local park.

“We were standing there together, and Carla asks if I know how to read it correctly. I said, yep, double line is a positive,” Shaun told Mamamia.

“She pulls it out of her pocket and takes her hand away from the indicator. Two solid red lines.”

“We were just jumping up and down, and hugging. A lady was doing exercises and walking past, and she saw I was holding up the test, and was like, 'Oh my God! Congratulations!'

“It was a truly amazing moment!” he effuses.

And it was. Shaun is the first single man granted approval to have a child through surrogate in Victoria. The journey to this point had been drawn-out and unforgiving for Shaun. Born into a tight-knit Jewish family in Johannesburg, together they arrived in Melbourne 22 years ago.

Even now, Shaun's parents live just four houses down from him, and his brother on the next street over.

“We really are a close family, and for me, I just didn't want to get old and not have that connection,” Shaun tells.

He warmly reflects on his early days; having heart to hearts with his dad as they walked their dogs in South Africa, joking and laughing on their way, and gatherings around the family table that stretched long into the evening.

“I wanted to have that same experience. I always knew I wanted to be a dad, from an early age. But being a gay guy, I just never knew how that was going to be doable.”

By that age, Shaun hoped to be married with a couple of children. But as he meandered through his 30s – “I dated some lovely men, and I was in great relationships” – parenthood evaded him.

“They either didn't want to have kids or family and/or they just weren't the right fit for me - somebody that I'd want to spend the rest of my life with,” Shaun tells.

As 40 closed in, he was hit with the realisation: If he doesn’t become a dad soon, the moment might pass.

“But unfortunately, the more anxious you get about becoming a parent, the more pressure you put on the guys you date. To find out if we were on the same page, on the first date, I’d ask if they wanted to have kids one day.”

“Oh, that never went down well! I could see their eyes glaze over,” he laughs.

“So, I was putting pressure on me, and them, which wasn't fair to anyone.”

Opting to take himself on a one-month safari adventure in Maasai Mara Serengeti, rather than throw an elaborate party, Shaun couldn’t elude the feelings that lay in wait as he awoke on his birthday.

“Despite having built a successful career and enjoying an otherwise full life, I was 40 years old, single, no kid, and felt like there was still a gaping void.”

But choosing perspective over pity, he made a decision: “When I get back, I am throwing myself into the surrogacy journey.”

“It just dawned on me. Why don't I do things the other way around? Becoming a parent is my biggest dream. Why don’t I just do that first - and then Mr. Right can come along the way and join me?”

“I'm very much of the belief that you create your own reality. You have to stand up and make things happen if you want it badly enough. And that was what I needed to do.”

“I think I just needed to wake up in Africa, alone, on my birthday first,” he erupts with laughter.

The road to surrogacy.

The surrogacy research began, extensive and thorough, and Shaun decided that he wanted to embark on the process in Australia.

“My thought was, as a single parent at this point in my life, I wanted to teach my child or children to have a beautiful relationship with their surrogate mother, and their egg donor as well, because I wanted to create a family for this child.”

While many consider the surrogacy process to be somewhat easier overseas, understanding that his child wouldn’t be able to know the egg donor and surrogate intimately made Australia an easy choice for Shaun.

“It's actually really difficult to find a surrogate here because it's altruistic” - meaning that while all pregnancy and birth-related costs are covered by the parent, paid surrogacy is illegal in Australia.

“You have to formulate these real and beautiful connections with women… And they don't always go according to plan.” 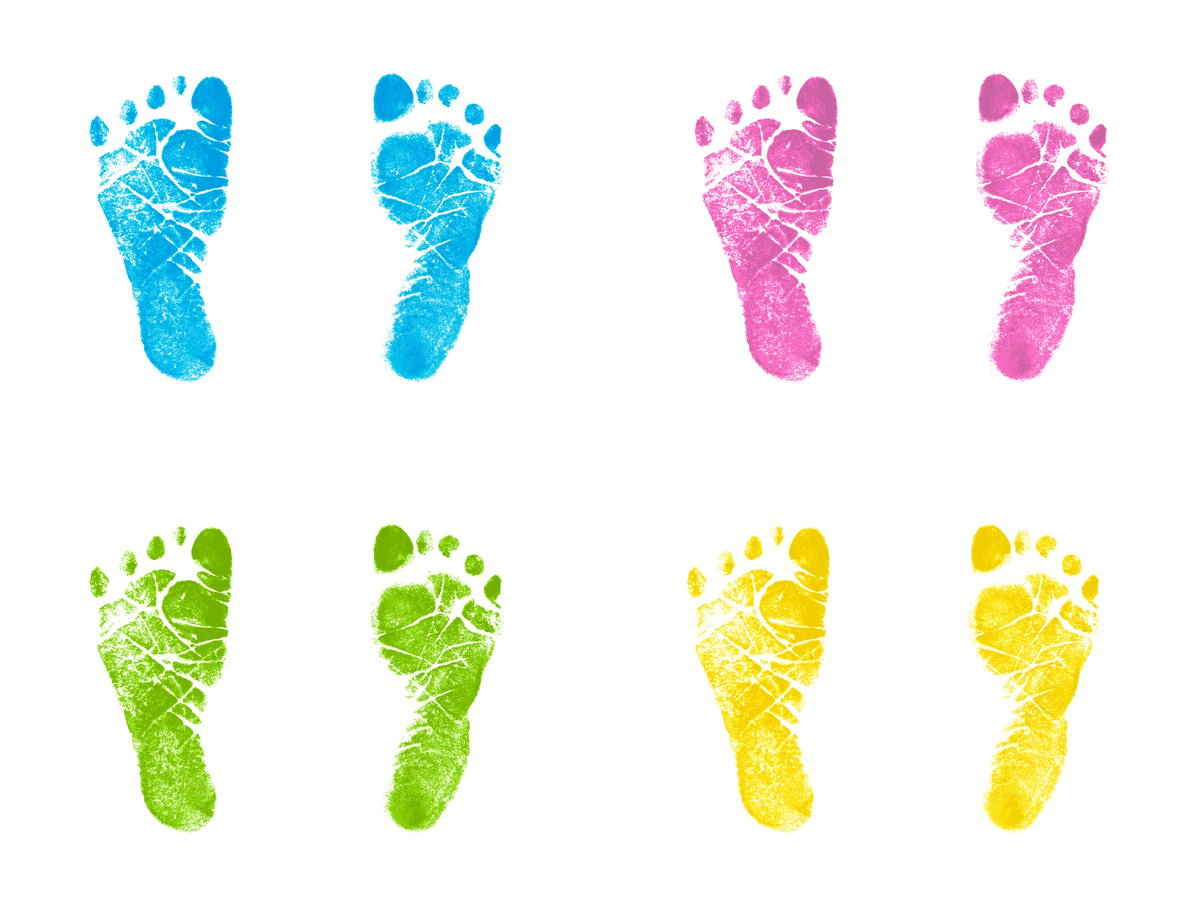 From struggle to celebration.

Three women surrogates had fallen through before Shaun arrived at Carla.

Each woman got four to six months into the process - building a relationship with Shaun, counselling, psychological assessments, medical tests and appointments - before hitting a wall.

“It was really heartbreaking when each one of those journeys came to an end. And I did feel disillusioned.”

One potential surrogate even reached as far as the Victorian Department of Health's patient review panel, a final hurdle in the approval process.

Shaun took himself overseas in between surrogates, hiking 200 kilometres of the Grand Canyon, and exploring Cape Town – “just to find myself again and just to lift my spirits enough to continue when I got back.”

And little did Shaun know, his surrogate would be someone he already knew.

Shaun and Carla met at a surrogacy catch-up, a few years prior. They instantly hit it off - but with no expectation or potential for her to be a surrogate for Shaun. In fact, at that time, she was pregnant for another gay couple.

They became good friends, Carla supporting Shaun through the arduous ups and downs. But upon seeing his devastation when the possibility of the third surrogate evaporated, Carla called Shaun with the most precious offer of all.

Shaun recalls, “Carla rang me up, and said, 'Hey Shauny, would you like me to carry for you?' I was overwhelmed, and very teary.”

His response: "I would absolutely love it if you carried for me, because you are the very person that I would love to have done this with." 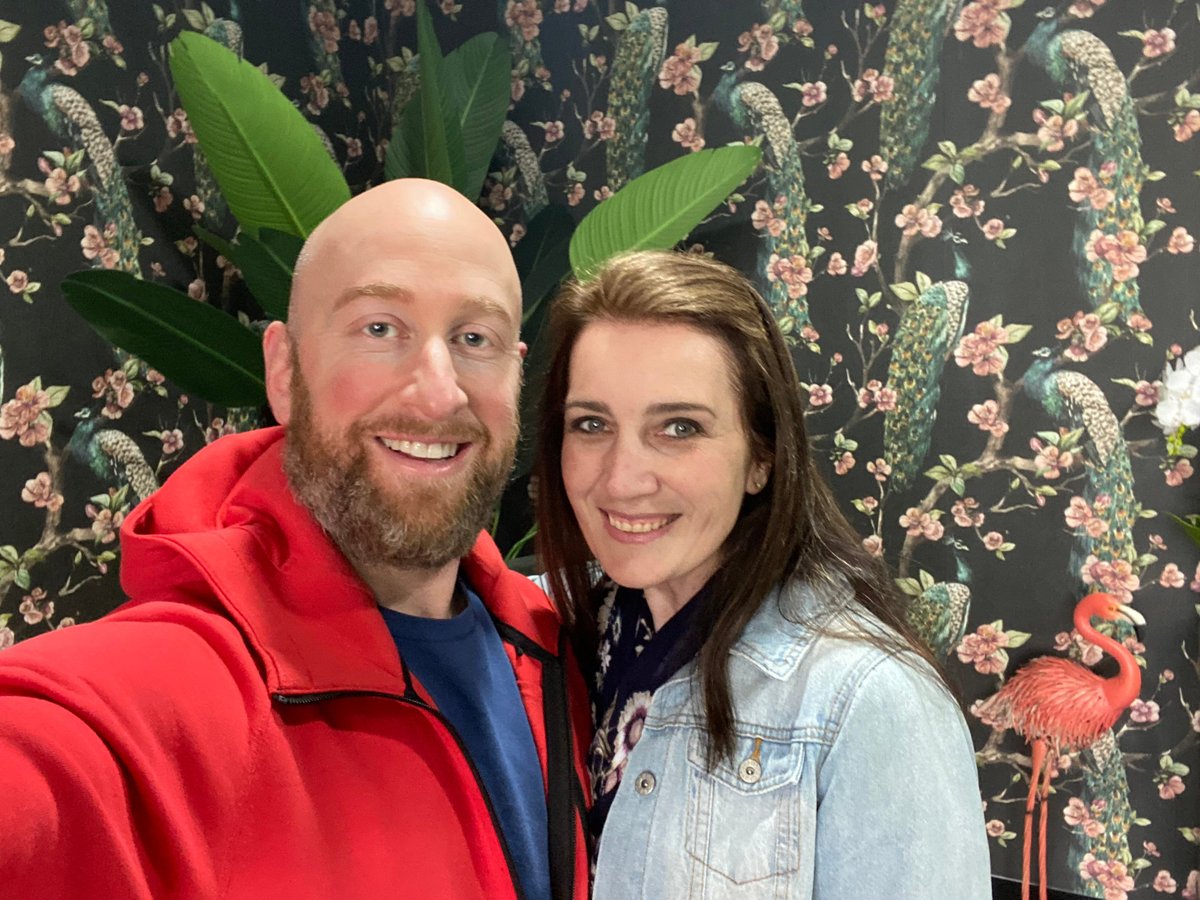 Carla and Shaun flew through the formalities, passing the patient review panel.

Where everyone else posted photos to attract the right egg donor, Shaun made a video - “I wanted to be the unicorn and stand out amongst everyone!”

And he did. The pair immediately struck up a friendship. Shaun has since met her young sons - the half-brothers to his child. There will be more siblings too, with Bree generously donating her eggs to two other sets of parents.

“We’ve all met and we're going to be close friends,” says Shaun, “And we’ve created this really gorgeous community. We've got a WhatsApp group and a Facebook group too.”

“There's going to be lots of love for these future kids.” 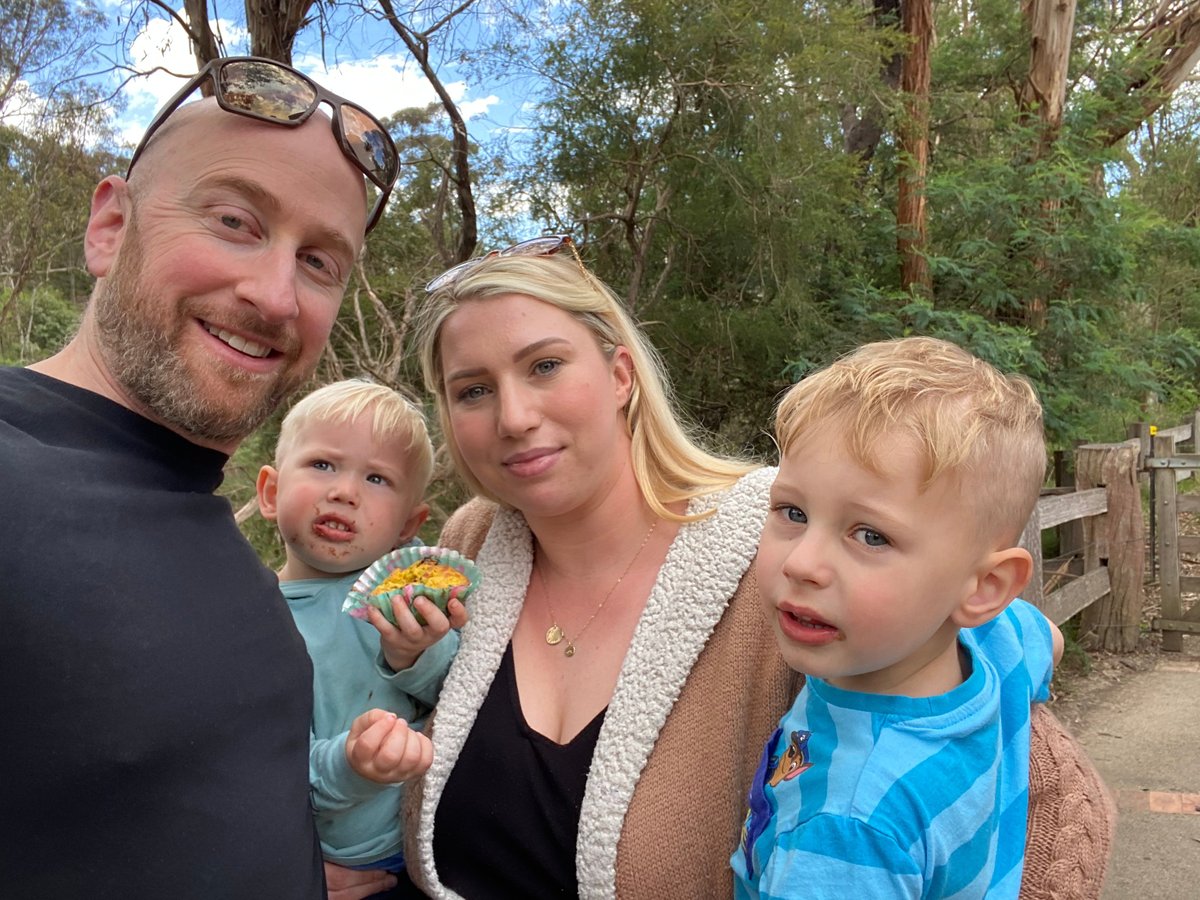 The support for Shaun and his path to parenthood has been “overwhelmingly positive”, extending far beyond the surrogacy community. Right after finding out that he was going to be a father, Shaun drove to his parent’s home to make the announcement. Elated by the news, they burst into tears, knowing how hard their son worked to get to this moment. Shaun says the Jewish community has also been fabulous about it too.

“I’m so proud of the progressive attitudes of our country,” he told Mamamia.

The only backlash he has received is by way of nasty comments from a tiny few online; not critical about his sexuality (“well, that’s awesome at least!”), but of his choice to embark on surrogacy, and sole parenting.

Although it pales to the heartfelt words Shaun has received from so many other single men.

“They’ve reached out saying, thank you for being a trailblazer, for giving us hope and encouragement, that we ourselves can do this as well.”

Shaun reflects, “I understand the criticism from strangers who don't have a clue who I am or are unfamiliar with the idea of a single man as a sole parent. I'm sure this is going to challenge them, so I think there might be a few ripples. But I'm hoping in five to 10 years, this is just mainstream.”

So far, the surrogacy process has come at a steep cost, currently around $40,000 with an additional $10,000 expected by the time of birth. For many, financial barriers inhibit access to surrogacy, with Shaun sharing that he has worked 12-hour days for 21 years in order to make this happen.

When asked what measures of progress he believes are needed to make the surrogacy process more accessible to single men, Shaun advocates for legislative reform towards a more streamlined, national approach (currently each state has different sets of rules).

He also believes the timeframe should be shorter - “anything can happen along the way - health issues, relationship breakdowns, etc.”

In the meantime, Shaun’s advice is, “Don't wait for all your ducks to be lined up.”

“If you're a single person – male, female or otherwise – and you have a dream to be a parent, and you've got lots of love to give, and the capacity to have a child or children, in your life. Just go for it.” 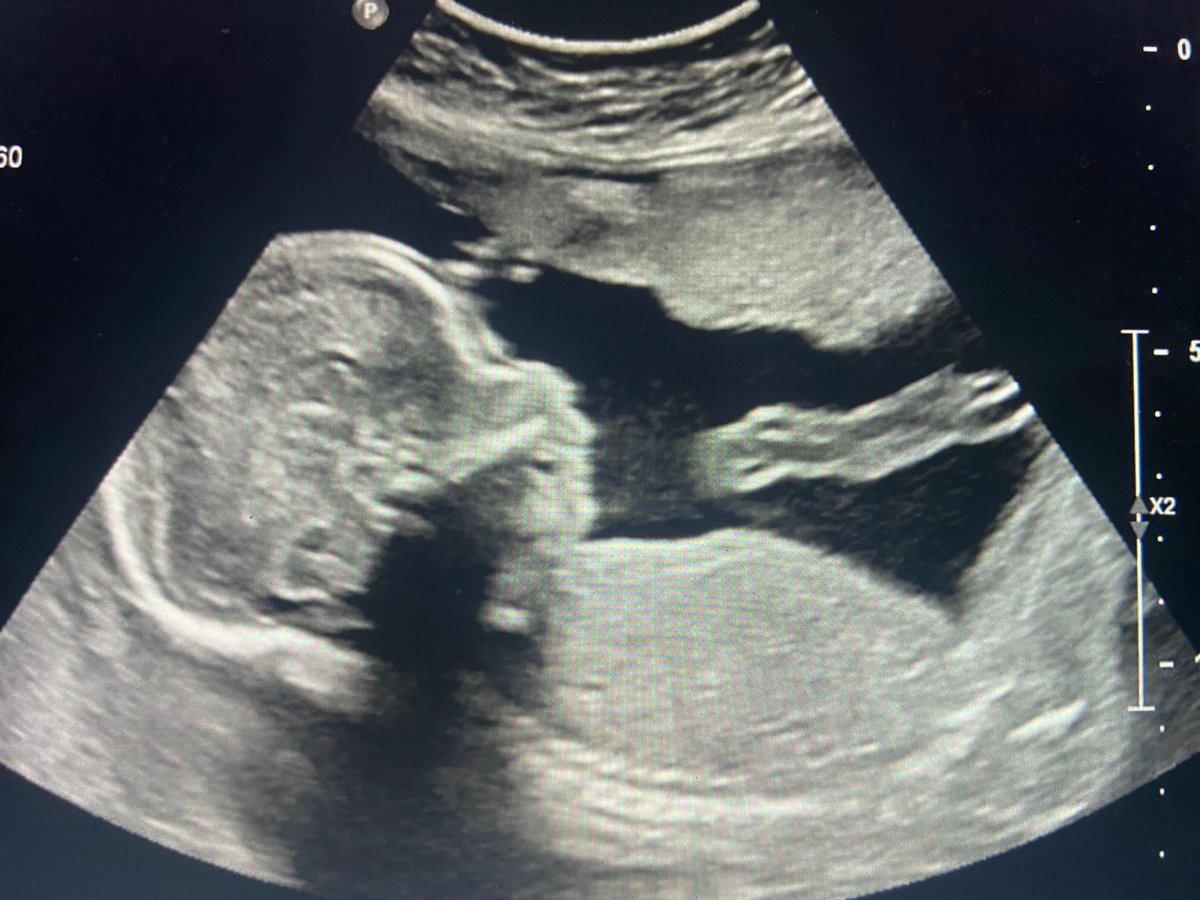 'I can't wait to love and nurture.'

Shaun always thought he would have a little girl. But while travelling to the egg transfer with Carla, he noticed the car in front, his all-time favourite model.

And the number plate was ‘boy’.

Carla is now six months pregnant with his son, due in April.

“I've overcome so much,” Shaun tells, a nod to the terrible anxiety and low self-esteem he suffered as a gay teen in a conservative South African community.

“But I just want to share with my son, you can be anything you want in life, you can reach for the stars, you can make anything happen, as long as you want it enough.”

“I can’t wait to love and nurture a beautiful spirit. Someone who can make a difference in this world, who can be whoever he wants to be – gay, bisexual, whatever sexual orientation.”

“Just live your life, and be happy.”

Are you thinking about having a baby in the next six months, pregnant, or currently breastfeeding? We want to hear from you - take our short survey to go in the running to win a $50 gift voucher

K
krm a month ago