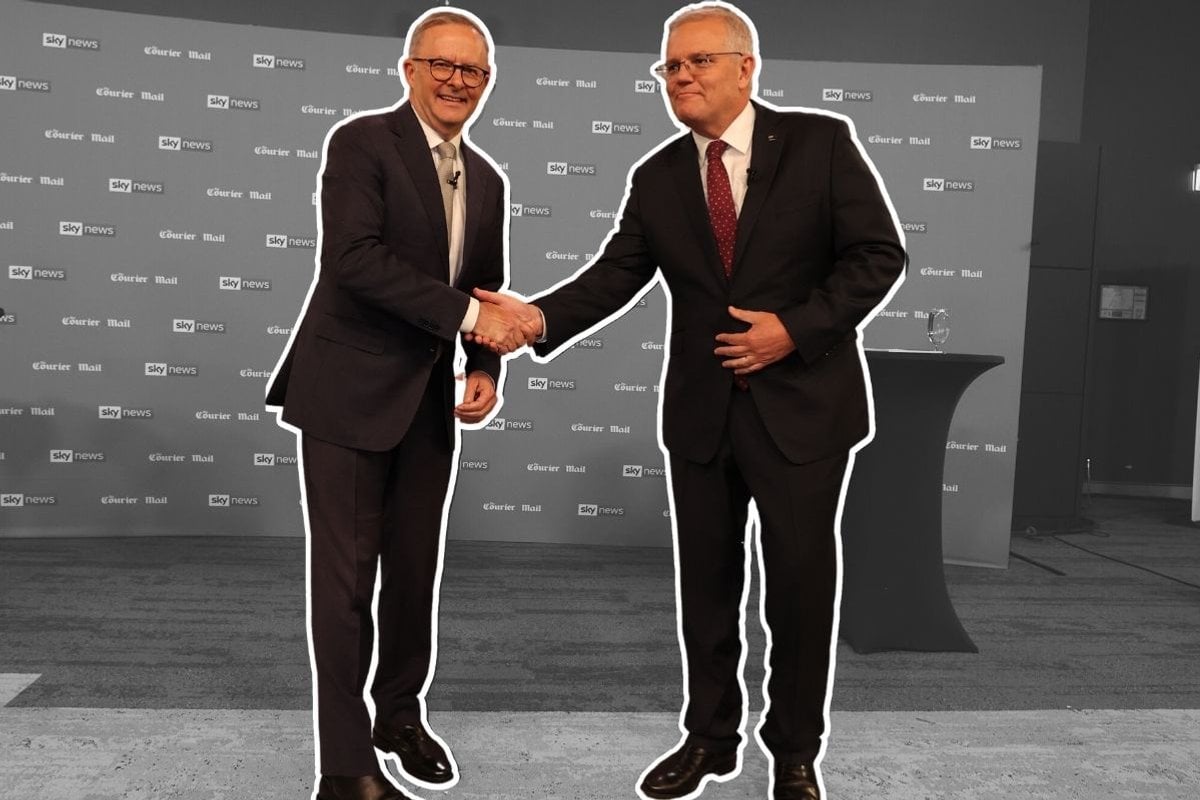 Last night we watched as Prime Minister Scott Morrison and Opposition Leader Anthony Albanese went head to head in the first leaders' debate of the election.

Both leaders faced questions from a panel of 100 undecided voters, ranging from the economy, nursing in aged care and the need for a federal integrity commission.

During the debate, Morrison won on the government's economic handling during the pandemic and recent budget turnaround while Labor took out the win for aged care reform and funding the NDIS.

Watch: 'Both were quite impressive'. People react to leaders' debate. Post continues below.

Of the voters in the room, 40 percent backed the opposition leader while 35 percent thought the prime minister had the better night. However, 25 percent still remained undecided.

In case you missed it, here are the four biggest takeaways from the debate.

Aged care reform was one of big topics raised during the debate, with Labor calling for nurses to be stationed 24/7 in aged care facilities, along with better nutrition and care for residents.

When asked about how the nursing workforce would be supported in aged care, Albanese said there was a critical need for more nurses to be trained up.

"Most people would be surprised that there aren't nurses in nursing homes, because it seems so fundamental," he said.

"Our aged care plan isn't something we've dreamed up, it is something that comes from the royal commission."

But Morrison said extra staff couldn't just "fall out of the sky", warning the plan would have repercussions in the sector.

The prime minister has been fielding criticism today, after his comments last night that he and his wife were "blessed" to have children who did not have disabilities.

His comment came after an audience question over NDIS funding from the mother of an autistic child who had their support on the scheme slashed by 30 percent.

Scott Morrison has told a Queensland mother of a child with autism he's "blessed" not to have kids who require NDIS support while responding to her question about the scheme during last night's leaders' debate. #ausvotes #auspol #leadersdebate pic.twitter.com/do9384Uafa

Albanese said the situation regarding the funding cuts was not an isolated one.

"Labor does the big things and we also do the big reforms," he said. "You can't be scared of the future, you have to shape the future otherwise, the future will shape you."

Discussion today, however, is more about Morrison's gaffe than the NDIS funding issue. He has since apologised telling reporters in Brisbane: "I meant no offence by what I said...but I accept that it has caused offense to people, and deeply apologise for any offence if caused."

3. There was disagreement over the need for an anti-corruption commission.

Integrity in politics was another major issue raised, with Labor calling for an anti-corruption commission to "restore faith in the political system".

"What we need is an anti-corruption commission with teeth...it needs to be independent, at arm's length, have the capacity to do public hearings if it's in the public interest, and it needs to have teeth," said Albanese.

But Morrison said he wanted to see a federal integrity commission tackle criminal issues and not be a "kangaroo court" or a trial by media.

"Our proposal for a Commonwealth Integrity Commission [is about] ensuring integrity right across the Commonwealth government," he said.

"It is not a kangaroo court, it is not something that is trying to trial people in the media - it is not about who your boyfriend is or things like that."

The establishment of a national integrity commission was one of Liberal's key 2019 election promises, but the bill wasn't introduced to parliament in the past term. Morrison says it wasn't introduced because the government's model didn't have Labor's support to pass.

The leaders got heated over party stances on boat turnbacks, with Morrison accusing Albanese of being inconsistent on the issue during Labor's previous term in government.

"Other countries around the world have said Australia got it right," said Morrison.

Albanese said Labor would do boat turnbacks should it win government.

Albanese said - "If I'm prime minister, I'll accept responsibility and work hard each and every day. I want an economy that sees wages being lifted. I want people to enjoy a higher standard of living. I want us to aspire and to be as optimistic as we should be as a country."

Morrison said - "Fundamentally, I really believe this election is all about the economy that you, and your family, and your communities will live in for the next ten years. Now is not the time to turn back. I look forward to the opportunities Australia has."