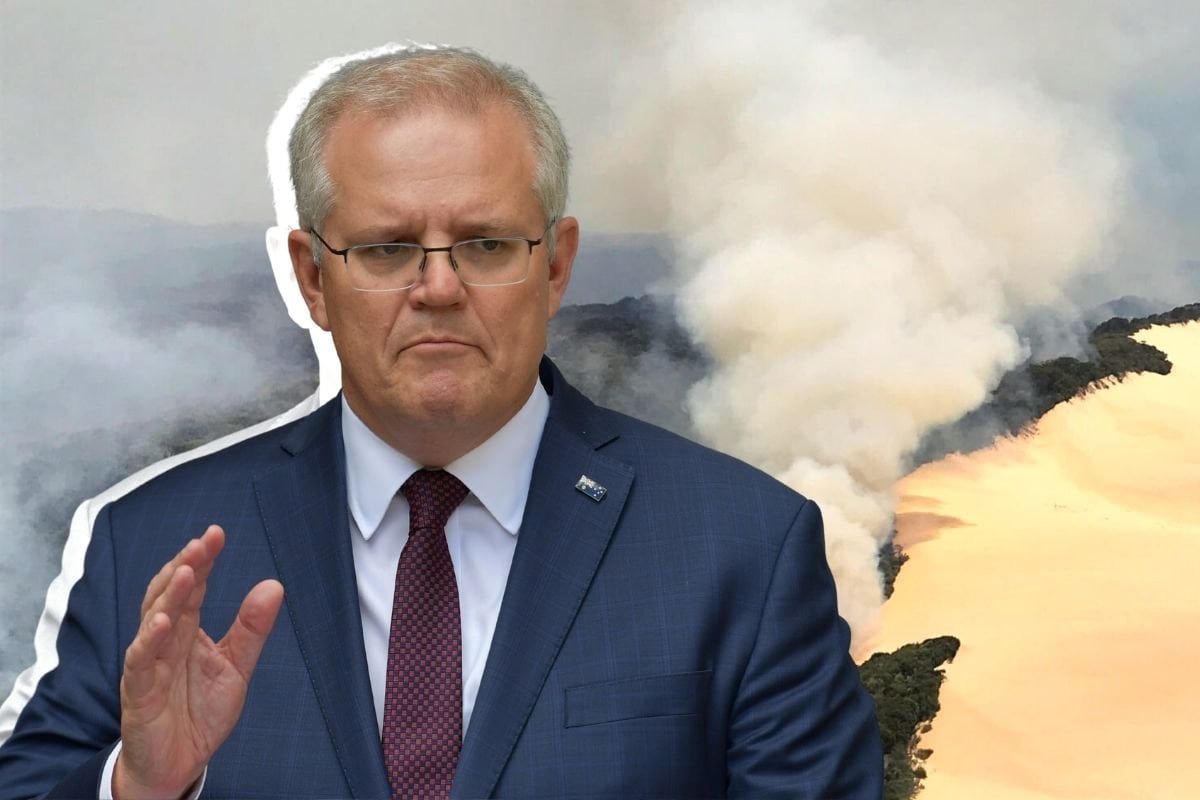 Their prediction was right, and we spent last summer under red and orange skies as much of the country went up in flames.

It wasn't the first time this request had been made.

Watch: The Marie Bashir, which belongs to NSW, is the only large air tanker owned by any Australian government. Post continues after video.

In 2003, after a bad bushfire season, the Howard government reached a deal that would see the government provide 50 per cent of the funds required annually by the National Aerial Firefighting Agency. By 2017, federal funding had dropped to 23 per cent.

In 2018, the Commonwealth rejected a call for an ongoing increase to aerial firefighting capabilities due to "other priorities within the government." The government instead opted for a one off $11 million top-up.

As the horror bushfire season of last year took hold, and the desperate pleas from the experts continued, Morrison announced another one-off $11 million boost in December 2019. Within weeks he had committed an additional $20 million to lease another four planes to take to our skies. Finally, he agreed to make the lump payment top-up ongoing.

But it was too little too late, and problems started to arise as Australia tried to source resources from the other side of the world. 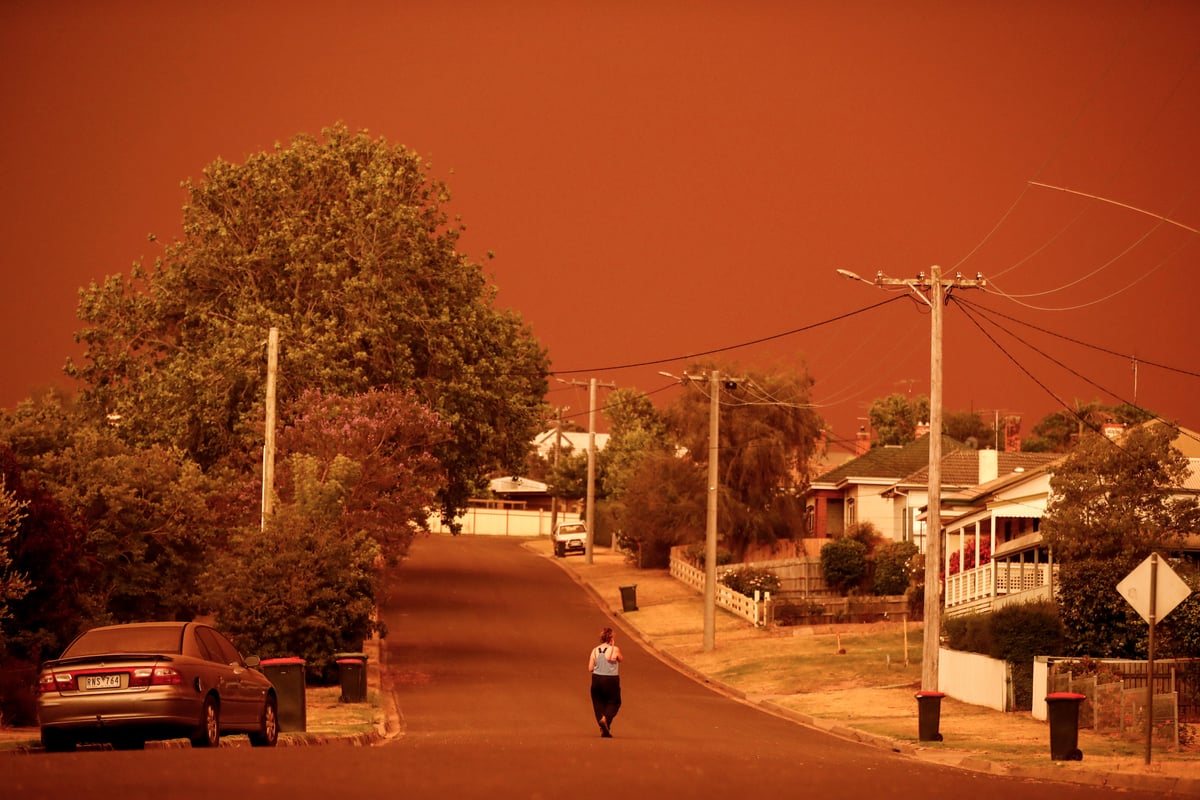 Last summer our skies were red, and our globe is only getting hotter. Image: East Gippsland in January by Darrian Traynor/Getty.

Planes were delayed due to other disasters like tornados in America and volcano eruptions in the Philippines. While in Canada planes were grounded due to an icy northern hemisphere winter.

We did get some help in the end, but this year's bushfire royal commission found that earlier preparation would have helped us keep people safe and stop the spread of the fires. It suggested that Australia was left vulnerable during last summer's devastating fires because it relied on heavy aircraft from North America which "were unavailable when needed."

Right now, the headlines of 2019 are repeating themselves in Queensland as residents on Fraser Island flee for their lives after being woken up at 3:30am to be told "leave immediately". Their homes were in danger from a bushfire that had been burning on the world heritage listed island since mid-October.

The fire has been ripping through dense bushland and sandy soil making aerial pursuits to dull the flames one of the main firefighting tactics.

QLD and NSW own one large tanker each and are currently helping that fight. But we're only seven days into summer, and our globe is only getting hotter. So what happens if every state goes up in flames again?

This massive 737 firefighting bomber we featured on #abc730 recently is flying to Queensland to battle the huge blaze on Fraser Island.

The Marie Bashir is the only large air tanker owned by any Australian government.

The bushfire royal commission’s final report handed down in October 2020, recommended Australia create a new national aerial firefighting fleet funded by state and federal governments, and resource it with at least one very large or large air tanker and extra pilots and support staff.

"We have concluded that Australia needs a national approach to natural disasters,” the report read.

"This does not mean that the Australian government should take over from state and territory governments.

"Rather, it means that we need whole-of-nation, whole-of-government and whole-of-society co-operation and effort."

While the Government said it 'noted' the recommendation, it declared that it would not establish a sovereign aerial firefighting fleet, with its justification being that states could 'lend' their planes to other states and territories when needed and "work collaboratively." It had "no desire to replicate or replace" the existing aerial capabilities of the states and territories.

The condemnation was swift as the Morrison government was slammed for its lukewarm response.

Labor's emergency management spokesman Murray Watt was among those to point to last year: "We saw what happened last year when we didn't have the aerial water bombers that we needed, tried to bring them in from overseas, and they weren't available. And now we've got a recommendation from the royal commission saying we should have our own. Scott Morrison's too arrogant and too stubborn to take up the recommendation."

Yet again, he fails to prepare. https://t.co/iEfJKAiiaK

These communities need our support.

Labor is calling for a national aerial firefighting fleet – something the Morrison Government has refused to buy.

We know for sure that the fires will come again.

And we need to be ready. pic.twitter.com/qsh8N6YevX

By December the government had changed its tune, with Emergency Management Minister David Littleproud telling ABC's 7:30 "We're happy to have a sovereign fleet but we want the fire commissioners to tell us.

"We'll support anything that the fire commissioners come back with in terms of their determination about what that fleet of aircraft needs to be. They are the professionals."

Right now, for the 2020/21 season, the ABC reports there's no major change to the current firefighting fleet, except for an extra large air tanker from overseas that will be leased as a "national reserve" to be shared between the states.

We had access to five last year, we've got six this year with all but one under contract. But we ended up scrambling and building our fleets to 11 last summer by leasing more overseas planes as we desperately fought to get on top of the flames.

Once again we're smack bang in the middle of a bushfire season under-prepared and under-resourced as part of our country burns. With our federal government lagging behind on the decisions we've been told will arm our country for increasingly hotter, drier summers.

It begs the question, just how many times do we have to see history repeat itself?

Once again we're seeing Australians run for their lives from a bushfire on Fraser Island. And already its fielding calls for an inquiry to be made into it because of a lack of prevention and dire mismanagement.

M
mm a year ago

Reply
Upvote
I think the bigger question here is- was the Queensland Fire Service and Queensland government asleep at the wheel or just incompetent once again to handle a major bush fire emergency for the second year in row? The fire has been burning out of control since mid October- 8 weeks! What was the ministers department and chiefs doing? It's all too easy to blame the person who has no authority to take control- Scott Morrison.
G
guest2 a year ago

Reply
Upvote
@mm According to some news reports, it took those responsible for management of the nature reserve, seven weeks before asking the QFS for assistance.   I don't think ScoMo was responsible for the illegal camp fire which started the blaze in the first place.
L
linese a year ago

Reply
Upvote
2 upvotes
It must be obvious to anyone paying attention, that PM MOrrison is interested in himself, and not the wellbeing of those who suffered in the horrific bushfires which could have been avoided had he met with the retired fire commissioners who were well aware of what was to happen;  Scomo (and what self-respecting "leader" would so Christian himself?  is not working for the benefit of our Nation...I hope he enjoyed the Murdoch birthday bash...so good to know what  the taxpayer dollar is paying for!
News
General
Opinion
True Crime
Politics
Sport
Explainer
Entertainment
Celebrity
Reality TV
Movies
TV
Books
Rogue
Royal
Lifestyle
Beauty
Fashion
Weddings
Home
Wellness
Health
Fitness
Travel
Food
Parents
Before The Bump
Pregnancy
Baby
Kids
Teens
School
Parent Opinion
Work & Money
Money
Finance
Career
Lady Startup
Relationships
Sex
Dating
Separation
Friendship
Family
Real Life
Couples