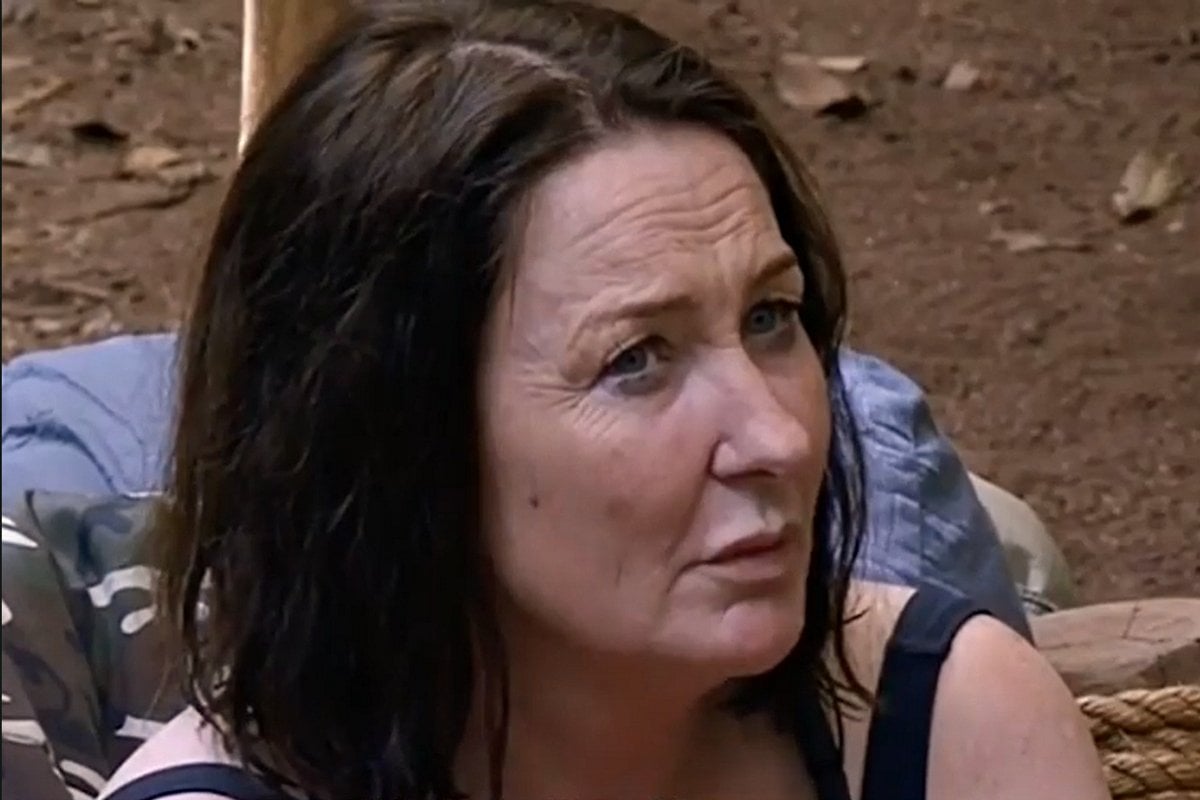 The following contains discussion of suicide, which may be triggering for some readers.

Addiction is not linear. It's not something someone owns then overcomes. It's an ongoing challenge in which the person must make the decision, over and over, day in and day out, not to give in to that persistent urge.

Comedian Fiona O'Loughlin is the first to say she doesn't always win that tug-o-war with her disease.

She lives with alcohol addiction and shared earlier this month that she relapsed in 2018 while Australia watched on, none the wiser.

"I very nearly lost my career": Fiona O'Loughlin talks about the impact of her addiction.

Speaking to The Daily Telegraph ahead of the release of her autobiography, Truths From An Unreliable Witness, the 57-year-old said she consumed alcohol-based hand sanitiser during her time on I'm A Celebrity Get Me Out of Here.

"My mind started playing games with me," she told the publication. "It is so nonsensical now, but I felt that I was the schmuck and everyone in Australia was laughing at me and that was why I was so close to winning. I didn’t know what was being edited and what was out there.

"I freaked and planned to [drink the sanitiser]. In the middle of the night I just f***ing did it."

In an interview with The Project on Tuesday night, O'Loughlin added, "basically it was a relapse, and I kept having these relapses, and that's kind of what I wanted to really drive home, is part of this disease that people don’t really understand, the cruelty of it is when you’re in it is the relapsing," she said. "I only knew about hand sanitiser because I’d been to so many rehabs."

O'Loughlin said she drank the product on multiple occasions and that, just a few days shy of her victory (in which she earned $100,000 for her chosen charity, Angel Flight), producers noticed her stumbling and slurring her speech.

She was treated on set.

"If they’d pulled me out of the jungle and I’d had to explain why, I don’t know that I was well enough at that point," she said.

"I think it was probably reckless of me [to do the show]. That is the problem with addicts, we think we do but we don’t have our own best interests at heart."

Speaking on The Project, O'Loughlin says she's now sober, appearing on screen looking virtually unrecognisable with new hair that she said allowed her to go "a bit incognito".

From hitting rock bottom to hitting her stride, comedian Fiona O'Loughlin has been through a lot. As someone who never holds back from expressing the dark truth of alcoholism, it's always refreshing to hear such an honest and raw account of the insidious disease. pic.twitter.com/kt4t1KoPBE

In her new book, the comedian admits she had been secretly drinking at the same time as performing comedy gigs about her new sober life.

"I don‘t mean to be offensive when I ask you this. You say you’re sober now, should we believe you now?” asked host Waleed Aly.

"I am a bit the boy who cried wolf, first one to admit that," she replied.

"When you're a chronic alcoholic like I am, there are only three endings..."

Approximately one in 20 Australians live with a substance abuse problem, the most common being tobacco and alcohol.

According to the 2019 National Drug Strategy Household Survey, 7.5 per cent of Australians aged 14 and over may be experiencing some form of alcohol dependence.

Yet the number of people reducing their alcohol consumption is increasing. Roughly 52 per cent of surveyed Australians took some action to cut back on drinking between 2016-2019, and 8.9 per cent stopped altogether.

Health authorities are watching this year's data particularly closely, though. Early research pointed to one in five Australians leaning more on alcohol during COVID-19 lockdowns, with women more likely to have increased their consumption, citing additional time at home and stress as their main reasons for doing so.

The impact on those with dependance is not yet clear.

❤ 16 days till the release of this tell-all, and you can pre-order now through @booktopiabooks. I’m going to have a lie down now #books #launch #womenreads #memoir #lifeinallitsglory #comedian #laugh #fionao

O'Loughlin has reportedly now been sober for a year, following a relapse while filming Channel 7's The All New Monty.

Her struggles first became public when she collapsed on stage during a performance at Brisbane's Queensland Performing Arts Centre in 2009.

In the years since, she's been generously forthcoming about her experience of alcoholism.

The topic became a searing part of her comedy in which she regaled memories of dinner parties that would end with her waking up on the kitchen table. Of convincing herself the success of a set was dependent on the two mini vodkas she'd down before walking on stage.

The mother of five also spoke in detail on I'm a Celebrity about her disease, which she described as being "shrouded in shame" to the point that she attempted to take her own life twice and could barely look at her own reflection.

"It is particularly shameful being a mother," she said. "When you’re a chronic alcoholic like I am, there are only three endings. There is death, jail or institution. That is it."

Speaking to Channel 9 last year, she added, "The reason I do continue to talk about it, is in case there is someone out there... Not that I'm a saint at all, but I just get something that I don't think we're understanding [as a society]: As long as there is alcohol there will always be alcoholics; there's a certain amount of us that this stuff is poison to."

You can buy Fiona O'Loughlin's book, Truths From An Unreliable Witness, right here.

If you are concerned about your drinking, or that of a loved one, please call the Alcohol Drug Information Service (ADIS) on 1800 250 015.