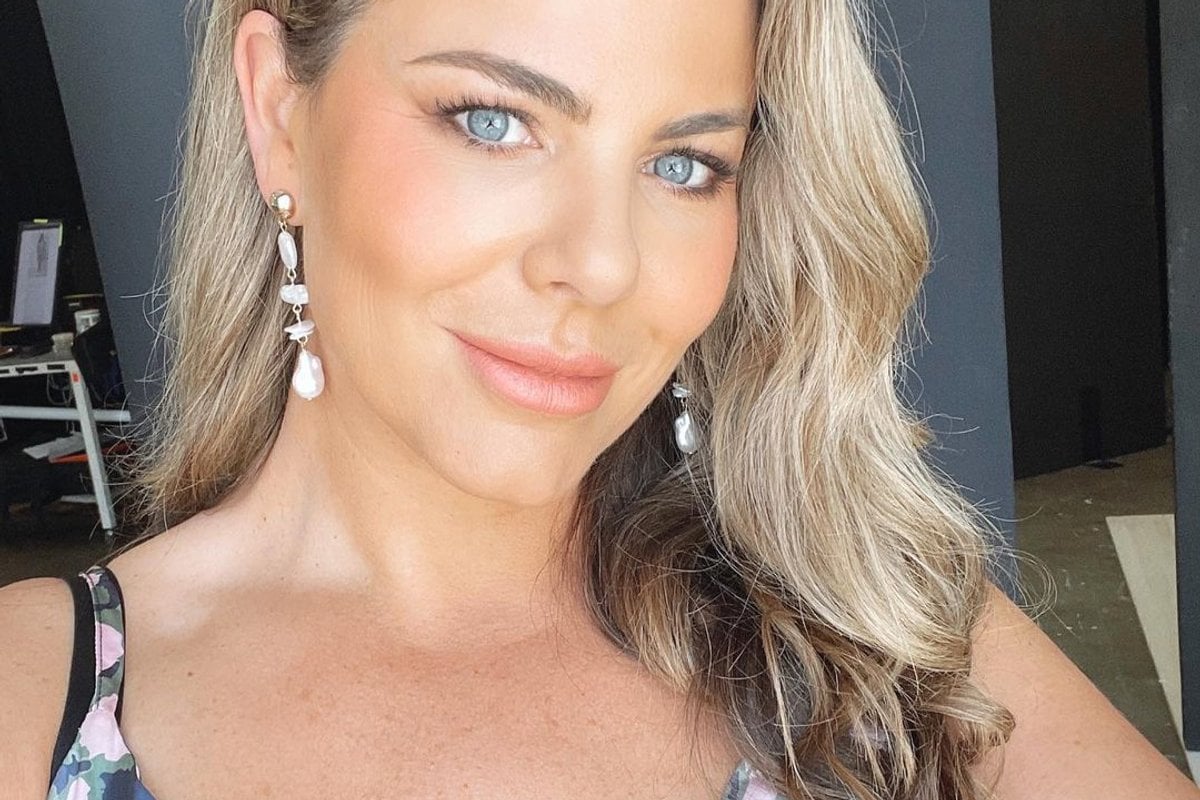 Fiona Falkiner gets her photograph taken for a living.

The TV presenter and model works with some of Australia's biggest fashion brands, modelling their clothes and appearing in their campaigns.

But she's in control when these photos are taken.

When the paparazzi take photos of her, she has zero control over the situation.

From 2015 to 2017, Fiona was the host of The Biggest Loser, a decade after appearing on the reality TV show herself. During that time she was single, going to events, and casually dating.

It was during this time the paparazzi started taking photos of her.

They would snap Fiona leaving a restaurant after a date, out with friends, and even on a packed beach in Europe.

While the TV presenter always hated the intrusive pap photos, there was one moment in particular where the paparazzi crossed the line.

In 2019, Fiona and her fiancée, Hayley Willis, were wedding venue hunting in Byron Bay. Before flying out on their last day, they went to Wategos Beach.

It was the middle of the week in winter and the beach was near-empty.

Because Fiona models underwear, she needs to avoid tan lines. Since there was no one on the beach that day, she sunbaked topless.

"[It was] stupid in hindsight," Fiona told Mia Freedman on Mamamia's No Filter podcast.

"But the thing is, I do sunbake topless, but I don't expect that there is going to be some creep, with a camera, taking my photo."

Sure enough, there was.

By the time Fiona and Hayley arrived at the airport that night, the photos of them at the beach had been published.

When Hayley saw the photos, the colour drained from her face - and Fiona instantly knew what had happened.

"It's so intrusive," Fiona added through tears.

"How can it be legal for someone to do that to someone, when if we were at Bondi Beach and there was a man taking photos of topless women he could be arrested.

"But it’s not illegal for someone to take photos, and then publish them for everyone to see.

"Every single time it happens, it shakes me to my core. I just hate it so much."

Listen to Fiona Falkiner and Hayley Willis entire chat with Mia Freedman on No Filter. Post continues after audio.

After those particular photos were published, Hayley tried to track down the photographer as it was affecting Fiona so much.

"It took me days to recover. I was in bed for days crying," Fiona recalled.

"It wasn't like I was going to report them to the police," Hayley said about the photographer.

"I actually just wanted to have a genuine conversation to say, 'Do you know how this affects someone?'"

Eventually, Hayley ended up getting ahold of the photographer.

Following their conversation, the photographer came for Fiona on social media.

"[They were] like how dare you call me and accuse me," Fiona said.

"But at not one point did I accuse him," Hayley added.

"I said, 'Look, I know your job is you're a paparazzi and whether or not you took the photos of Fiona, I don't know. [But] I just need you to understand the impact this has on someone and their mental health... I can't even put it into words.

"[Fiona] has not been able to come out of her room for three days in fear that she will be papped again."

Now, getting photographed by the paparazzi is something that gives Fiona anxiety whenever she goes out in public. So much so, she tends to drink before events to calm her nerves if she thinks they might be there.

At Mamamia, we have a policy where we don't participate in the paparazzi economy or publish their photos.

This is a clear example of why.

For more of Fiona and Hayley's story, listen to No Filter on the Mamamia app or via your preferred podcast platform.

Reply
Upvote
1 upvotes
The whole paparazzi industy is just revolting. Stalking people, taking pictures of their children, shouting horrible things at them to get a reaction... look at the way they treated Britney, they pushed her to the edge, and profited off her misery. And 99% of the time, the photos aren't even that interesting. Some celeb walking down the street, or leaving a restaurant, or pushing a trolley full of groceries - whoop dee friggen doo! And I really disagree with the idea that this is "the price they pay" for fame. No one should have to put up with this.
S
simple simon 14 days ago

Reply
Upvote
@rush But you're speaking as if the photographers are taking these photo's for their own pleasure. They are taking them to be paid because members of the public want to see them.
I remember a high profile woman wrote about celebrity photos and lamb cutlets as things she enjoys while not thinking about their origin.
M
mamamia-user-482898552 14 days ago

Reply
Upvote
@rush The flip side is that many pap shots are actually pre-arranged and taken with the cooperation of the person being papped. Obviously not the case in this article, but the overall issue a little more complex than just celebrities being hounded. Many are willing participants in this transaction, and will directly profit from the exposure that pap pics generate.

Reply
Upvote
@simple simon being paid to take them doesn't make it any better. It's still weird to follow someone around and take pictures of them (and often their families) without their consent.