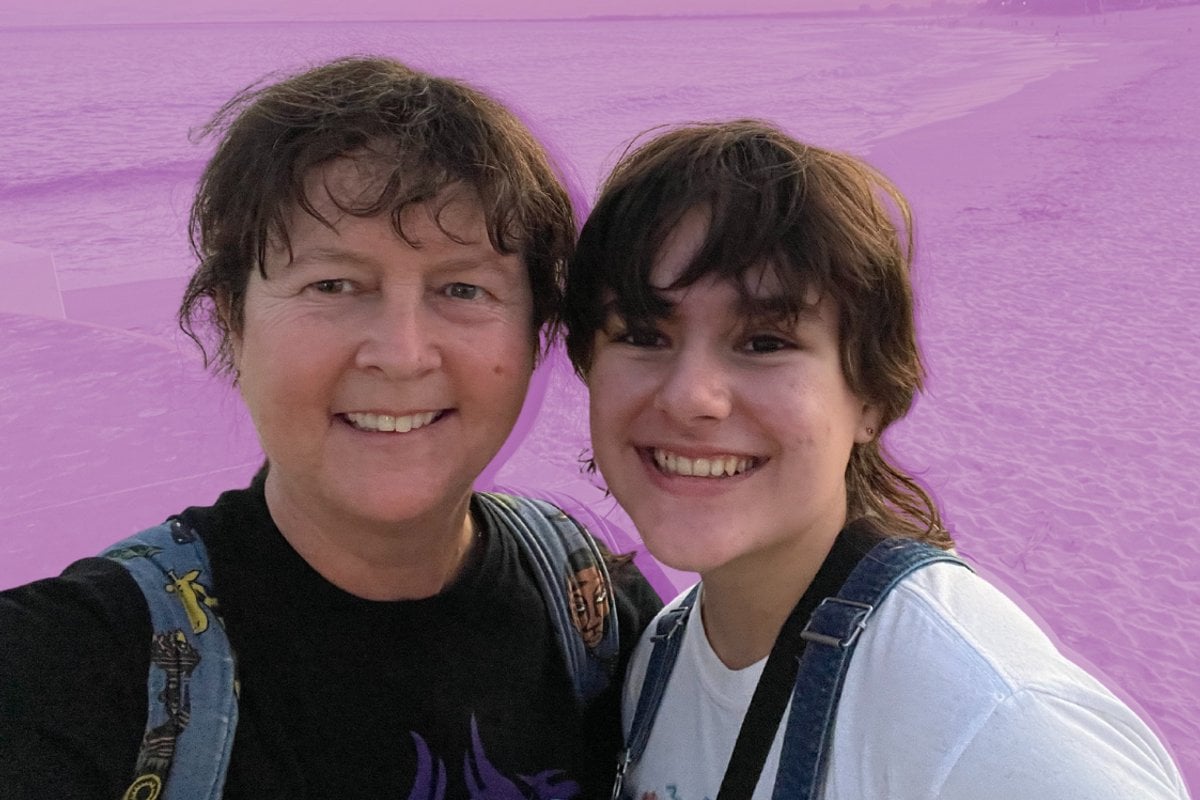 Quill was just two years old when they started asking questions about their egg and sperm donors.

"I was just curious all my life," the 14-year-old told Mamamia.

"I always wanted to know my genetic parents... Who are they? What did they do for their job? What are their hobbies?"

Growing up, Quill's mother, Anne, a single mum by choice, has always been very open about how Quill was conceived.

"I quite deliberately brought up the donors in ordinary conversation from a very young age," said Anne, who features on Tuesday night's episode of SBS' Dateline with Quill.

"I remember once we were watching an episode of Sesame Street where they were looking at musical instruments. And I went, 'Oh, that's a viola! That's the instrument your dad plays."

Watch: Mamamia's Get Me Pregnant podcast. Post continues below.

But aside from the information in the sperm donor's profile, Anne didn't know much more about him. She didn't even have a photo.

"One big question was 'can I meet him?'" recalled Anne.

But there was just one problem.

Quill wasn't allowed to contact their sperm donor until they turned 18.

It was a stipulation that Anne agreed to (as opposed to full anonymity) when she started the sperm donor process back in 2006.

At the time, Anne decided to have a baby on her own with the help of donors, after she had a "wake up call" about her fertility.

"I was coming up to 40, and I already had an operation and been warned 'if you're going to have a baby you better think about it very quickly.' So I decided I would go ahead and be a single mum by choice," she shared.

Unfortunately, Anne's attempts at conceiving with her own eggs through IVF failed, and she sadly miscarried a baby at 10 weeks.

"I tried three years with my own eggs... I would get good enough quality eggs that they would fertilise, but they just didn't work when they transferred. Eventually, my doctor in Sydney said, 'look, the only thing I can suggest is donor eggs'."

However, at the time, in the mid-2000s, Anne says there wasn't a lot of options for her in Sydney.

"The fertility clinic said your best option is an egg donor but we can't help you there... just ask a friend or ask a relative. That was all they could offer."

So Anne turned her sights overseas to America, which offered a larger pool of donors, including those who were willing to be known.

She eventually found a fertility clinic in Los Angeles who was willing to work with her GP back home in Sydney. And in early 2006 she flew over by herself for her first consultation.

Looking back on the flight over, Anne said she was full of excitement.

"This was the next step and a new avenue with more hope."

At the time, Anne's family and most of her friends had no idea what she was doing in the US, as she would typically fly to the States for work.

"I didn't tell anyone I was doing this... If it didn't work, I didn't want people feeling sorry for me. I just didn't need that pressure. Especially the longer it went on, after years of trying, I just did not want somebody else resting their entire hopes of grandparenthood on what my daily blood test was."

After her first consultation, Anne went online to a major sperm bank in LA to choose her child's sperm donor. There, on the screen in front of her, was a list of thousands of names and profiles.

Reading through, Anne didn't care much for attributes like hair and eye colour. But there were two main criteria she was looking for.

One was that the donor should be open, with the sperm bank facilitating contact after the child turned 18. And the second was that they had a rhesus negative blood group to match her own.

That put the shortlist down to about 20 to 30 donors.

Anne was also looking for someone who had shared interests and a similar ethnic background to her, so the donor and her baby "wouldn't be out of place in my family and I could talk to them about my heritage".

With those attributes factored in she dwindled the list down even further, before choosing someone who she affectionately describes as "fairly ordinary".

"He was a musician, he liked to travel. He liked Thai food and played in an orchestra. He did a lot of the same sports that I did... He just seemed interested in the world around him."

Anne was also given a visual description of what the donor looked like rather than a photo.

It was a stark contrast to her egg donor, who she was able to meet face-to-face in a room but wasn't able to exchange full names with.

For Anne, the donors were her "last chance" at having a child.

Unfortunately, the first transfer didn't work and Anne had to face "the extreme disappointment of having to fly back to Australia knowing that it had failed."

But with frozen embryos in storage, she was able to plan her next trip to America for her second transfer, which was thankfully, a success.

"It was absolutely amazing," Anne said about finding out she was pregnant with Quill.

"It was exciting, it was thrilling. But, I had been there once before, because I've miscarried a baby... so I also knew that it was a very long process." 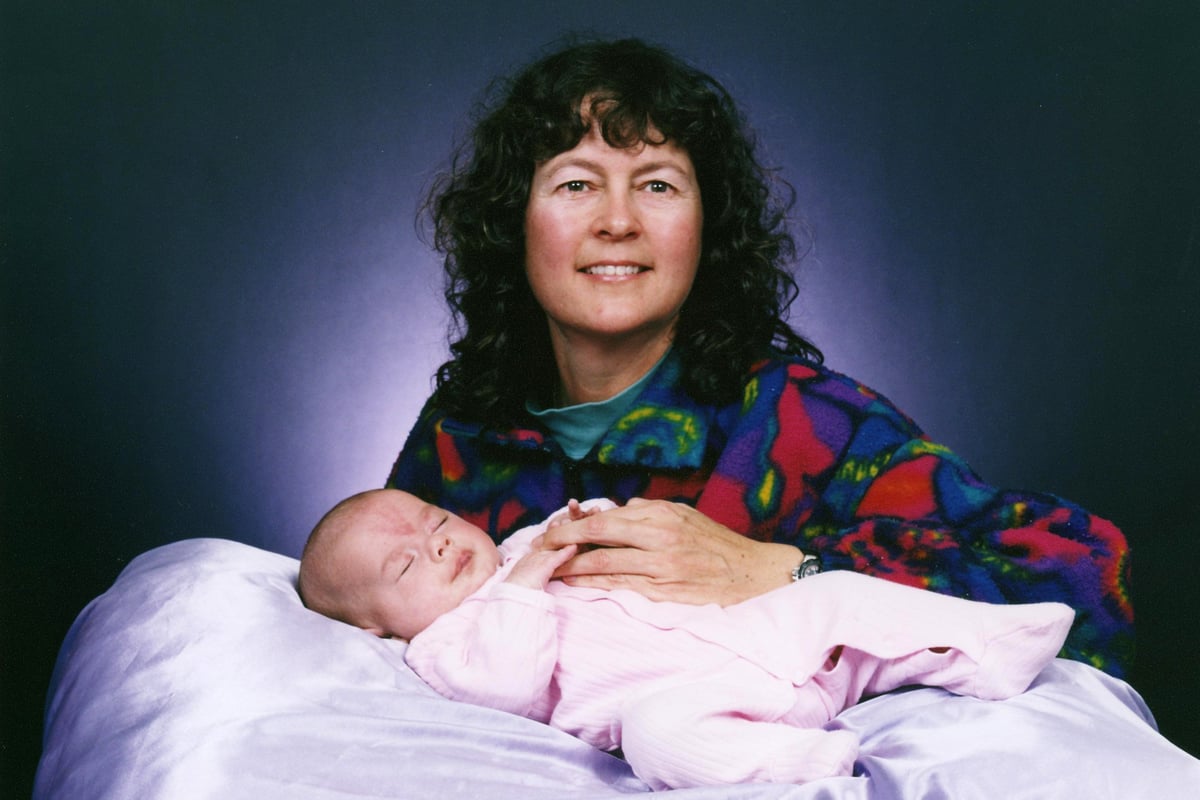 Within the first year after Quill was born, Anne decided to try make contact with her egg donor.

However, the agency blocked all of her attempts.

"My contract said that I could have contact her at any time at my discretion. But when I actually tried to make contact... the agency totally blocked any contact and refused to even answer a medical question," she said.

Anne tried to search for her herself, but she turned up empty-handed.

It wasn't until watching an MTV documentary on anonymous donors, that Anne realised she could request information about people born on a certain day from the US registry office.

Knowing the egg donor's date of birth, Anne was able to use the other little information she had to land on a name.

"There was a person. Wow," said Anne. "I was able to then Google them and find her on Facebook".

Anne later reached out to the egg donor when Quill was seven and she has since learned more about Quill's Native American ancestry.

"Knowing that was very important to Quill."

And the egg donor isn't the only person Quill has connected with. Before Quill was one, Anne had made contact with Quill's siblings on their sperm donor's side, thanks to The Donor Sibling registry in the US.

"We had connected with two other mothers who also use the same sperm donor. And we exchanged photos and emails and even video calls... So Quill has always known siblings from their earliest living memory."

The only person that was left to find was the sperm donor. However, tracking them down proved to be a lot more difficult.

"I tried from the same methods [as the egg donor], but I only had a year of birth... So we decided to do a DNA test," said Anne.

After sending off DNA samples in the mail, Quill didn't get a direct hit on the donor or his immediate family. But they were able to see the names of his more distant relatives.

From there, Anne had to play detective.

"First of all, I had to figure out how distant they were and how they were related to each other. That took me about two months after getting the results to try and turn a list of matches into an identification of a family and a donor."

Eventually they landed on a name. And thanks to Ancestry and voter registration records, Anne was able to track down an address.

Then at 10 years old, Quill decided to reach out to her sperm donor for the first time and write him a letter.

"I wanted to make sure that this was Quill's decision about deciding to make contact, not not mine," said Anne.

However, given the arrangement with the sperm bank, there was a risk that came with making contact before Quill turned 18.

"I already knew from being in like donor conceived Facebook groups that if you break the rules of the [sperm] bank, they can refuse to cooperate later. But that risk in itself was pretty low," said Anne.

Anne also assumed the donor would be ok with making contact, considering he agreed to do so in another eight years' time.

"As a parent, you're actually offering an opportunity to the donor to know your child's earlier than the age of 18." 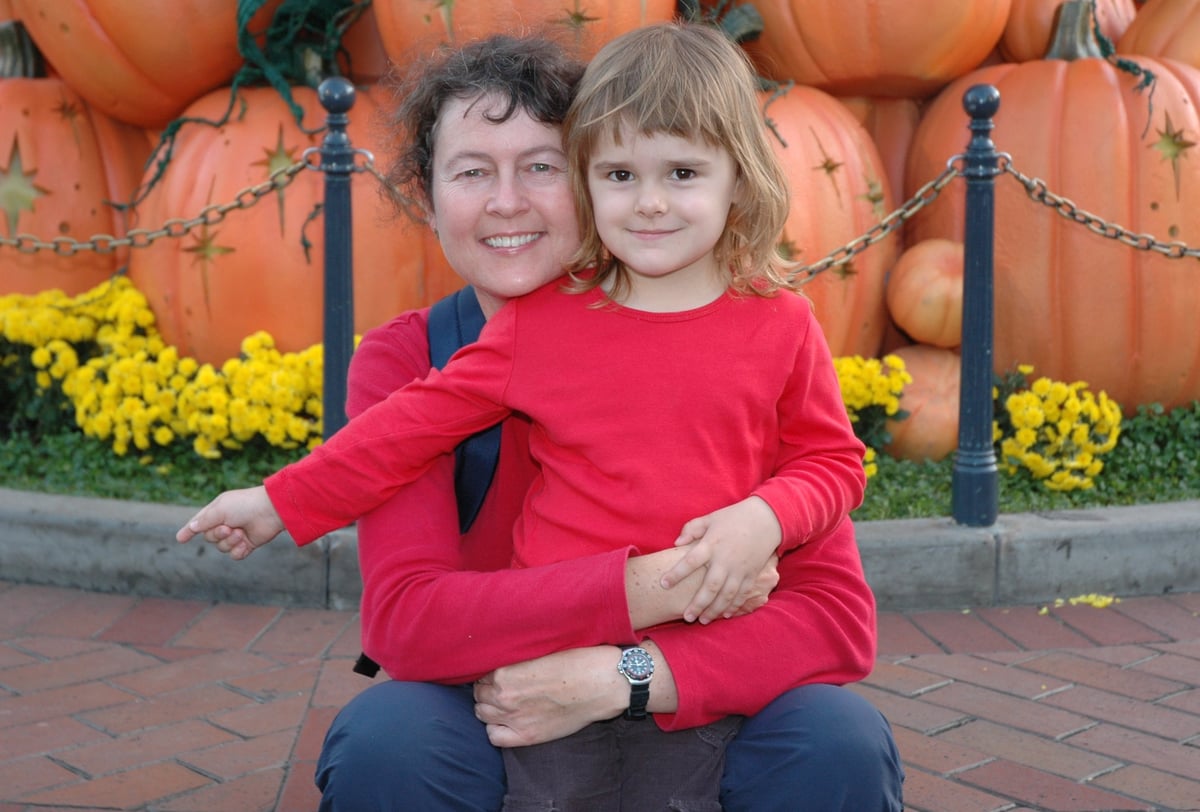 When it came time for Quill to sit down and write the letter, Anne was understandably nervous.

But it was the last thing Quill was feeling.

"I was more excited," they told Mamamia, before sharing what they wrote in the letter.

But after sending the letter, Quill didn't hear anything back.

"I was nervous as time went on. I always hoped that I wouldn't have a donor that didn't want to get to know me, because I know a few people have donors that are like that."

Three months later, a letter from the sperm donor made its way to Australia.

"It was a really nice letter," said Quill. "He said he wanted to get to know me and the plan was to go to America in 2020 [and see him]. But obviously, that didn't work out [with the pandemic]."

With meeting face-to-face off the table, Quill and their sperm donor decided to FaceTime instead.

"It was a good first call. We just talked to him and his wife, and it was really great," Quill shared.

"I didn't really picture him [in any way] in my head. I was kind of open to however he would be."

These days, Quill and the donor have a close relationship and keep in contact online.

"We've got into a habit of calling my sperm donor's family for Christmas. And last Christmas, I also called my uncle from the egg donor side."

"It's just really nice getting to know a whole new bunch of relatives." 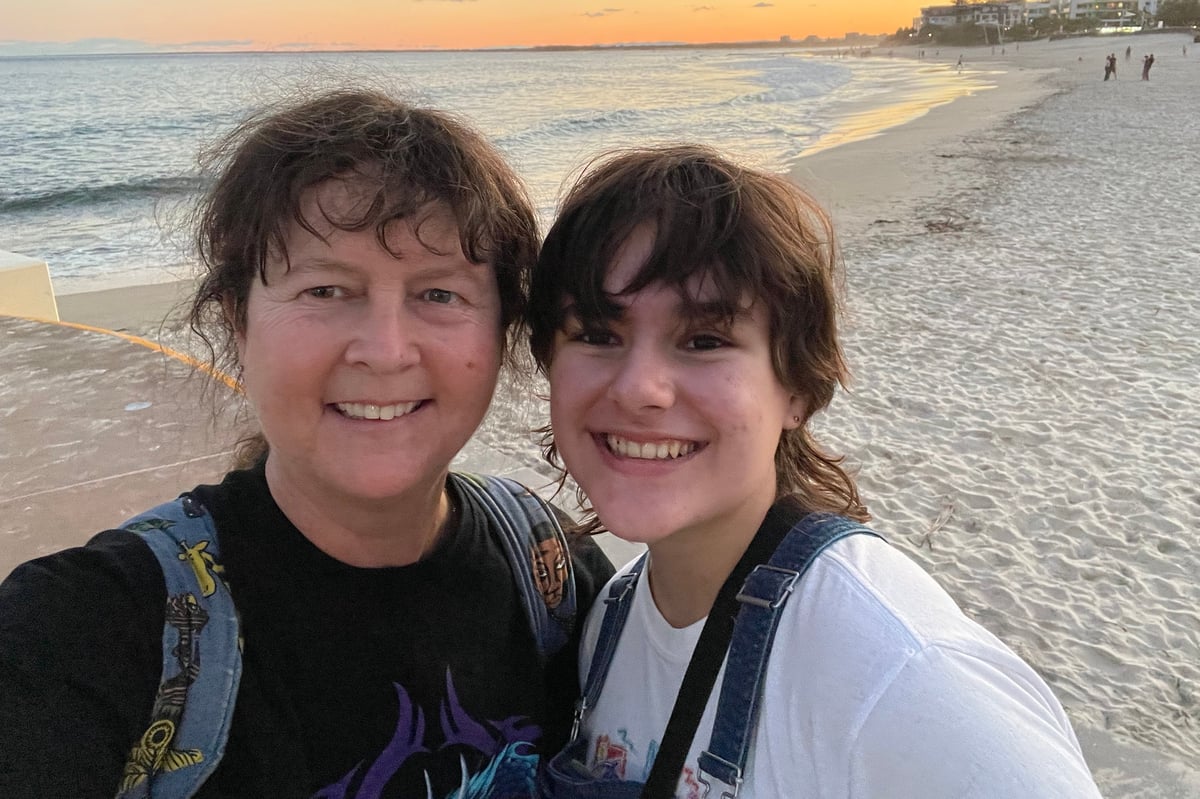 That said, Quill has come to realise the difference between a father and a sperm donor.

"Once I actually met him, I stopped calling him my dad. I realised he wasn't my dad, he was my donor. And they were different things."

Since meeting both their egg and sperm donors, Quill has noticed "quite a few" similarities between them.

"I can have space for my mum and my two donors. It doesn't need to be a one or the other. I have space in my family tree and in my heart for my different families.

You can hear more from Quill and Anne tonight on SBS Dateline at 9.30pm.

For anyone looking to go down a similar path to parenthood, Anne recommends joining Egg Donation Australia on Facebook.

Reply
Upvote
What a great story glad it worked out so well.
K
katp a month ago